VIA 1982 "The Canadian" Through Kingston During one brief, shining moment, a train named 'The Canadian' operated through Kingston. Selfishly, this meant that our western trips could begin and end in a sleeping car at Kingston!

We found that this only worked in the westbound direction. On the one occasion when we could take advantage of this through sleeper, the eastbound train was so late that it was killed at Toronto and we were 'lucky' to be able to perform an across-the-platform transfer at Toronto. We could forget about the 'hassle' of snoozing in our sleeping car from 07hr to 09hr in Toronto before being carried through to Kingston.

That transfer and shlep was made on a hot Sunday at noon. As we pulled into Toronto, our sleeping car porter was humourously and ironically crooning VIA's current jingle - 'Take it easy when you travel, take the train'. The coach to Kingston was hot, and overcrowded with upset people and long distance suitcases. A fist-fight almost broke out as a brakeman, a conductor and two female passengers struggled to negotiate meaning over what 'my seat' meant.

Just as a decision had finally been rendered against an irate and unruly standing passenger ... and the sentence was about to be carried out ... a check of the still-sitting victor's ticket against the previously-unnoticed 'hat check' was made. The victor had been a squatter all along! A reversal as quick and dramatic as one might see in a professional wrestling match - one in which the hero finally prevailed - played out.

I had seen the settling of the original passenger and the hat check ceremony. I could have shortened that public 'trial' considerably. But I, my sleeping car, my spouse and my luggage were all in very separate locations and I just wasn't in the mood to help. Call it the Bystander Effect.

Late and overcrowded trains; operating crews dealing with the consequences; mysteries for the public like the ancient shibboleth of those with a bestowed hat check - yea! wherever it might be found; VIA's best laid plans gang aft agley ... this was the human experience of front-line workers and riders of VIA in the 1980s. Over and over and over.

But, in Montreal, where the timetables were made up, things seemed to be going so well!

Look below at what was promised: The 'four of us' would drive to our little country station. We'd walk across the ties and be greeted with a smile to ride on our new Light, Rapid and Comfortable train ... 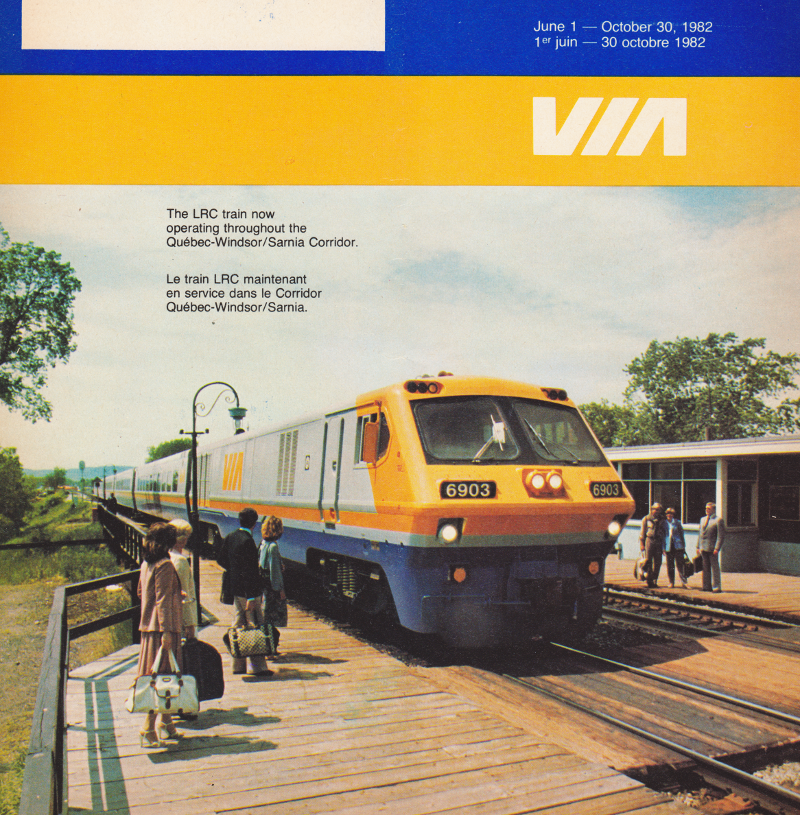 To make this scene realistic for the period ... this train would have to be stopped ...
the last door of the last car would open, and a waving figure would beckon the passengers to hike back four car lengths to board.


Perhaps the best place to experience VIA trains during this era was from the outside. 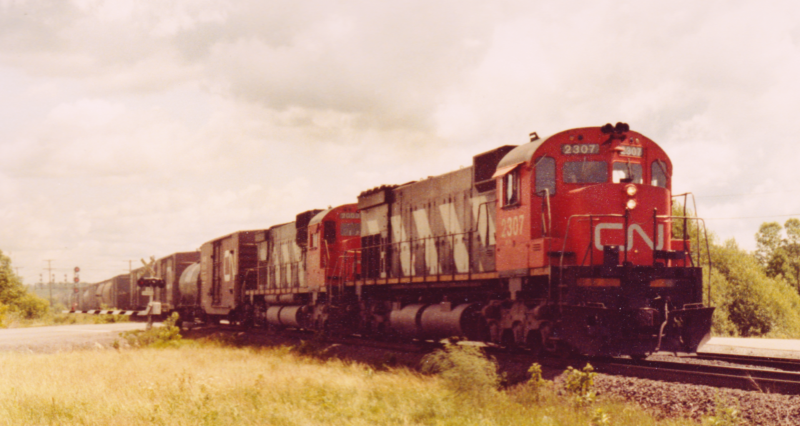 Around noon, a westbound freight rolls by Kingston station. 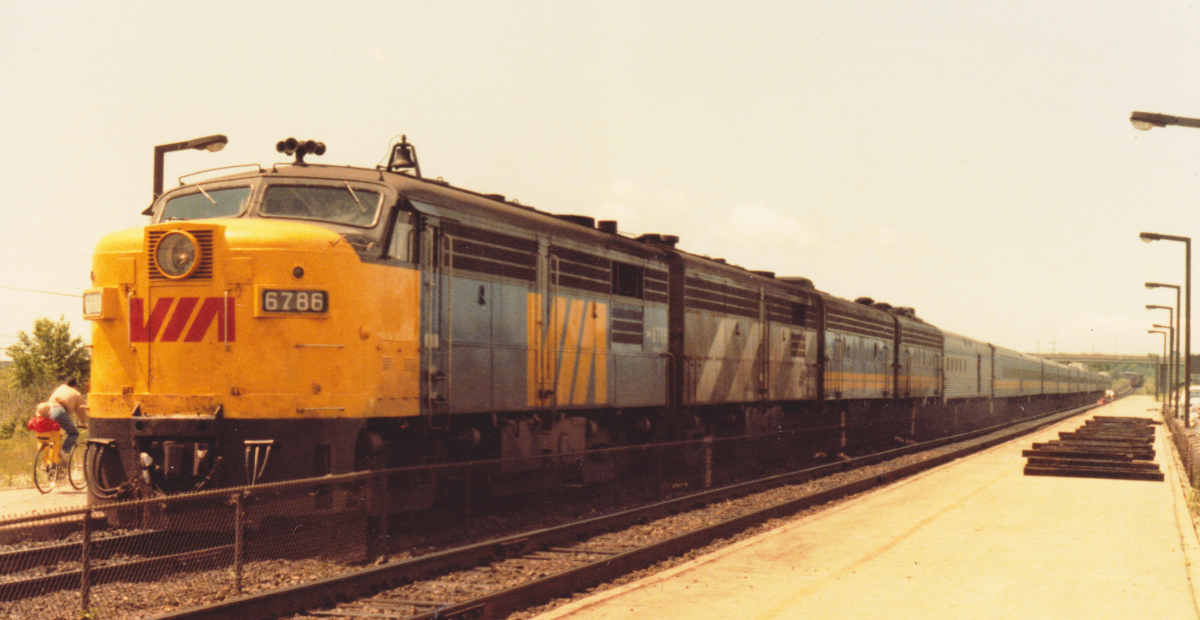 As the westbound makes its way up the hill, VIA train Number 2 has arrived.
Because of the clearance limits, maintenance of way crews were changing the ties at the platform by hand. 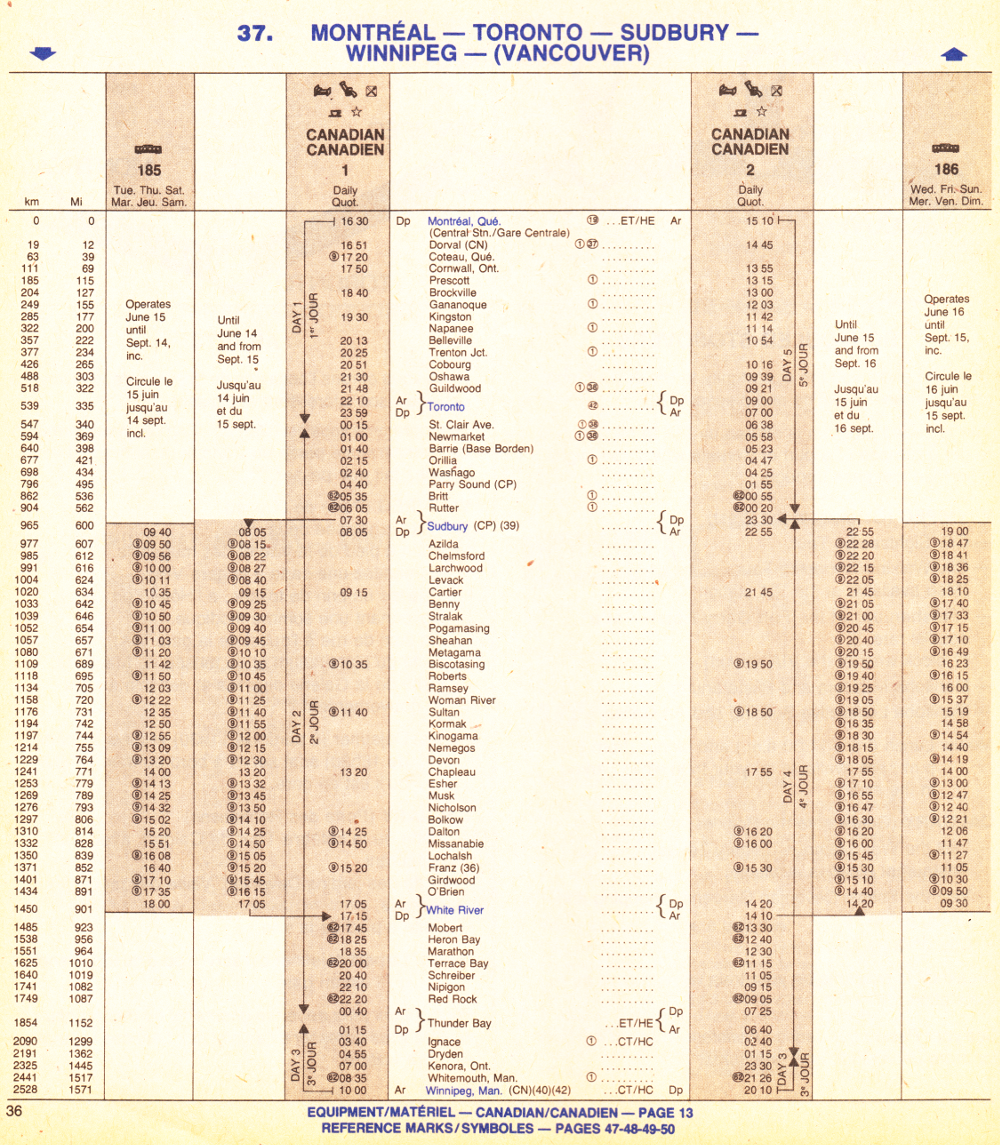 The contemporary public timetable is shown above. At one point, as passengers, we had watched VIA's Train Number One working as a pickup truck. Between Sudbury and White River, we stopped at some length to take on four cedar strip boats (into the baggage car). We travelled for less than 30 minutes and stopped again for a while as they were unloaded again. This mis-match of equipment to mission often interfered with the ability to stay on schedule.

In the evening, Train No 1 arrives at Kingston. 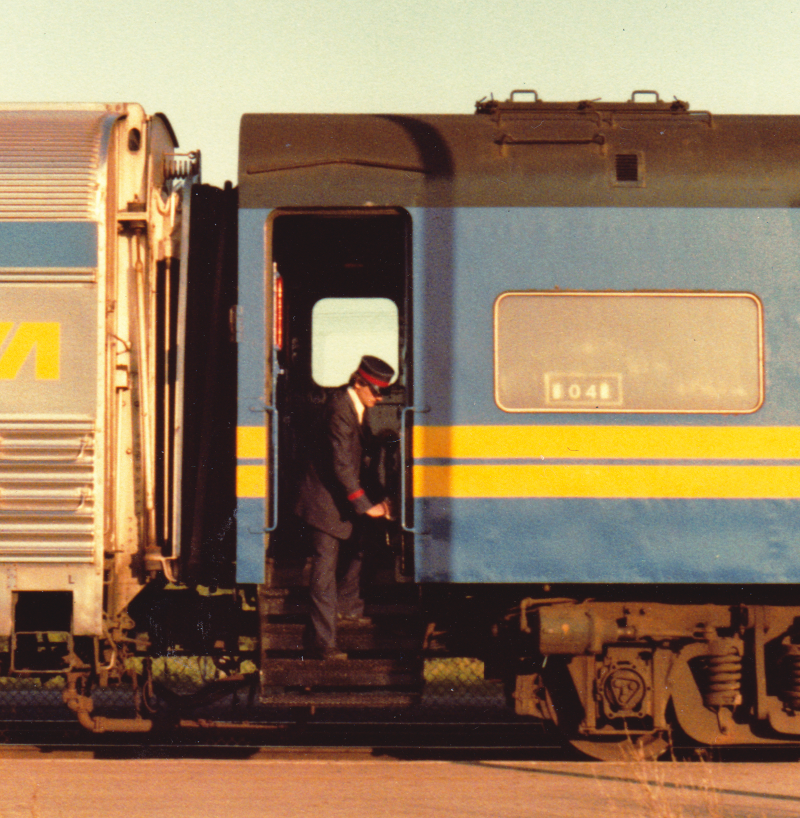 As the train passes, a passenger brakeman wipes down the trap door's hand rail.

Anecdotally, the mismatch between steel brake shoes (used on cars like those to the right) and the more sensitive disc brakes (on the genuine CPR Canadian equipment to the left) often resulted in the wheels of the Canadian equipment being locked and slid. The hammering of a flat spot through the day and night added to the 'experience' of a trip across Canada. The engineer waits and watches. The VIA agent leaps back onto the baggage wagon - pulled by a Sears garden tractor.

The inadequacies of traditional railway procedures are seen above. Only one door may be opened so each passenger may be polled about their destination and directed accordingly. This process is made less efficient by the 'frontier' style boarding tradition - which requires everyone to deadlift their luggage from the level of the rail to the lowest step, then up the car stairs and then through constricted passages to the left or right. With luck, the inside coach door is not latched and is bumping everyone as they enter from the vestibule.

And by now, there is additional delay flowing out from the car interior. Those already aboard must shuffle their loads along the aisle, find a seat and find a place near their seat to stow their luggage in the rapidly-filling car.

The daily reality was far from four people stepping aboard the LRC in the Quebec countryside.

With two whistles heard from within the cab -
produced by operating crew using the signalling air valve at the vestibule used for loading -
the train is off.
The engineer's extended hand waves to the people interested in recording this event. 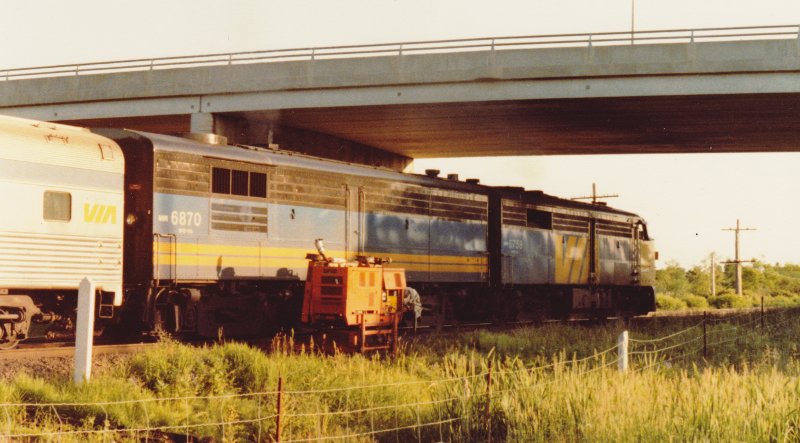 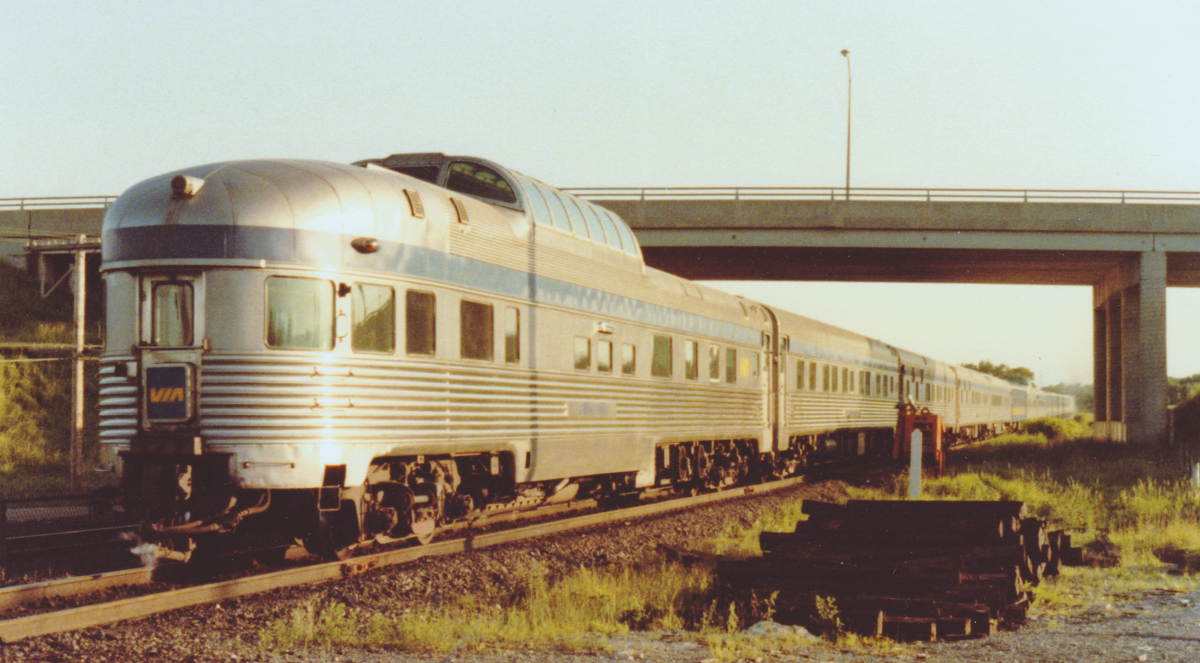 With about 2870 miles left to travel on this particular trip, the Canadian 'Park' car displays the markers.
Its working steam line is venting steam produced far ahead on the locomotives.