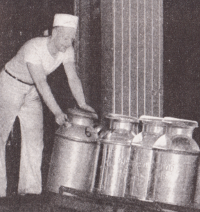 Though it is little known today, Canadian railways made a key contribution to the growth and health of urban children in the early 1900s. Milk was a unique element of  'baggage car traffic'.

In its 'Facts and Figures' book of 1946, the CPR described 'express' as an extra service it had developed.

Regular freight would typically be loaded trackside at a shipper's factory loading dock ... or at a public loading facility - a 'team track'. Classically, a team of horses and a wagon would attend a designated railcar at a team track to load or to receive freight.

Railway express developed in Canada before the Royal Mail had invented parcel post. An item which required door-to-door expedited handling, often with special climate control, would be a typical job for railway express. Two examples would be: a large case of farm fresh eggs; a package ordered from the Eaton's catalogue.

As previously discussed in an earlier post, railway baggage was generally oversized items travelling with a passenger which they wouldn't need to access until the end of their journey. Like today's airline checked baggage, this baggage was checked before boarding, carried in a separate baggage area, and picked up at the destination in exchange for the check document. Usually a passenger would travel on the same train as their baggage - assuming the train had a baggage car in its consist.

While fast passenger trains did not stop at the stations of minor towns - 'milk runs' did. So a passenger in a rush might not enjoy being on a milk run as the train would likely be an 'all stops local' ... and this train would also dwell at the station as the available labour worked to load 100 pound cans of fresh milk aboard.

In the 1930s, on the former Canadian Northern line connecting St Andrew's East, Quebec and Montreal, the following process was used on my great-grandfather's farm when shipping milk to Montreal. The cans were filled from the milking machine pails during the evening milking and the cans were cooled in a water bath. Very early the next morning, after the morning milking, the accumulated 24 hours of milk (in 100 pound cans) would be loaded, along with cans from the neighbours (for a fee), and taken by a farmer's son on a farm wagon (or sled in winter) to be loaded on the morning train. In the evening, another trip would be made to the station to retrieve the empty cans returned by the dairy ... brought back by the evening train. ... The morning dispatching of all the milk would ensure it reached the dairy during the day shift.

The Historical Significance of Milk by Rail

Shortly after 1900, a major improvement in the nutrition of urban children was made through the railways' ability to transport fresh milk to city dairies - for bottling and door-to-door sale. Milk is a natural food containing elements and vitamins essential for healthy growth  ... consider the body tissue built by calves growing into full-size cattle.

A major improvement in public health practices made this nutrition possible - pasteurization. Some common and serious bovine diseases were/are transmissible to humans. Also, contamination by gut bacteria can easily occur during milking ... if you contemplate bovine anatomy for a moment, you'll understand how this happens.

Today, we take proper childhood nutrition for granted. Just over a century ago, railways connected the wide open spaces necessary for grazing milk cows and for handling their wastes ... to crowded cities where natural horse power for transportation (including horses used for milk delivery) kept armies of street sweepers busy.

Above: Elizabeth Street, Toronto in 1913. This was a Department of Health photo taken by a city photographer. Toronto reportedly did a better job than other cities of deliberately documenting urban squalor to spur on efforts to eliminate it.

Below: In Vancouver, children obtain school-based nutrition in 1926.

Getting Milk from the Country to the City


An American photo from circa 1940 shows milk arriving at a major urban dairy in a special freight car. There are clues that this might be a refrigerator car cooled by ice.

For a smaller operation in a cooler Canadian climate, baggage car transportation would be adequate.

If you look closely, you can see a 'string check' label sticking out on a can in the foreground. In the dairy employee's hands a can is identified as belonging to shipper '6'. These two images come from a photocopy from a magazine - their origin is apparently the Public Archives of Canada, photo date circa 1925. In the foreground, you can see a can handle bearing a string check and other cans have numbers or names painted on them.

Having studied the procedures above, you'll expect that railway employees are transferring the loaded cans from baggage wagons ('trucks') into the baggage car. If we are strictly following procedure, the cans in the foreground will be loaded onto the trucks by the shipper's (i.e. the farmer's) men. The 'milk run' will sit at the station and wait until all this is done.

As with all practices 'in the field' it seems likely that the instructions in the book would be adhered to as much as they were enforced. If the railway got paid and no one complained, why rock the boat? Then, things might get slacker ... until there was a problem ... and then the book would come out!

Above, with an enlargement, you can see that there are a couple of full 'trucks' to be loaded aboard before the cans on the platform can be hoisted onto these baggage wagons by the farm workers.

Below, in the Grand Trunk Western region (USA) of the Canadian National Railways, they seem to have a more formal and legalistic system in place.

Railroad density and competition may have been relatively greater in parts of the GTW zone. As well, dairy milk collection trucks or independent trucking firms may have started to provide significant competition for the Grand Trunk Western's 'milk by rail' service in that area.

In the exacting GTW regs below (from the same booklet), you will not find any repetition of the Canadian provisions above for milk which magically shows up at flagstops without paperwork ... or specifying who will unload cans if trains are over 30 minutes late!

... While the Canadian milk producers were dealing with the CNR - a railway owned by their own government ... the American farmers were buying transportation services from the GTW - just another commercial railroad among many in their region. Above, is the Indiana area of the Grand Trunk Western (labelled as GT). It is hard to pick out this CNR subsidiary's line from all the competitors crowding around it.

Below, the GTW regs conclude. 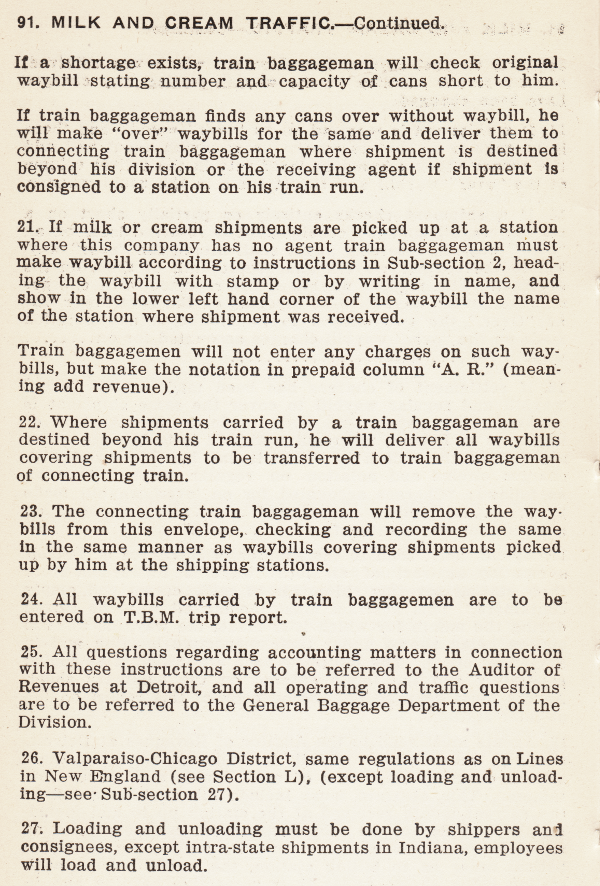 Below, my great uncle is now operating my great-grandfather's farm. He is emptying a milking machine pail into the bulk cooler. You can see the refrigeration equipment - which is housed behind the grill in the foreground. 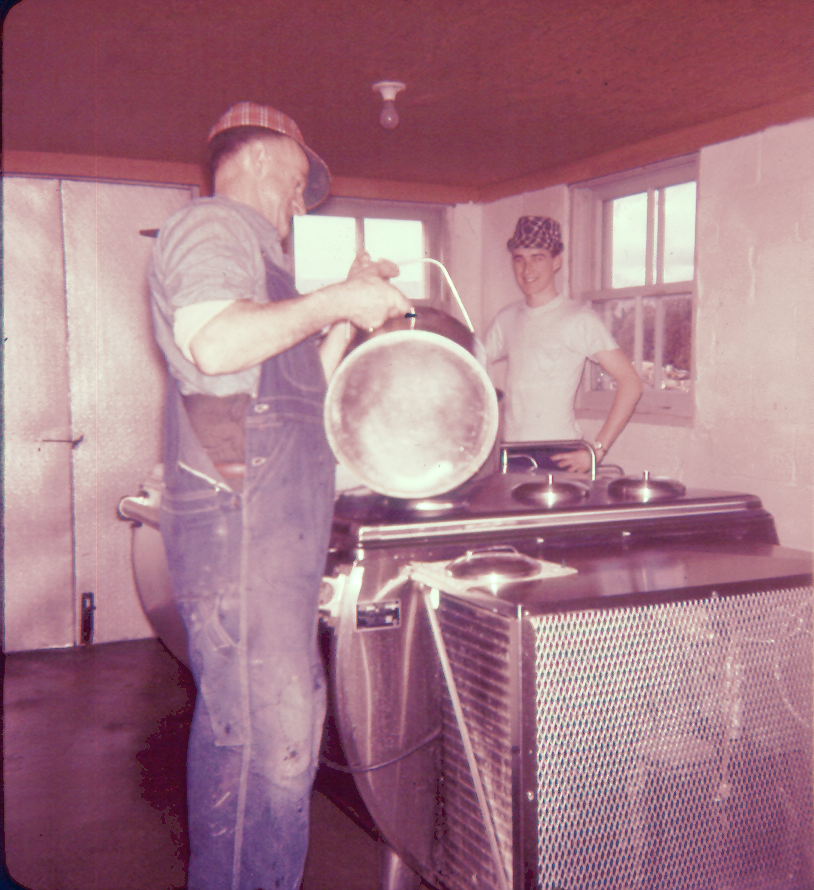 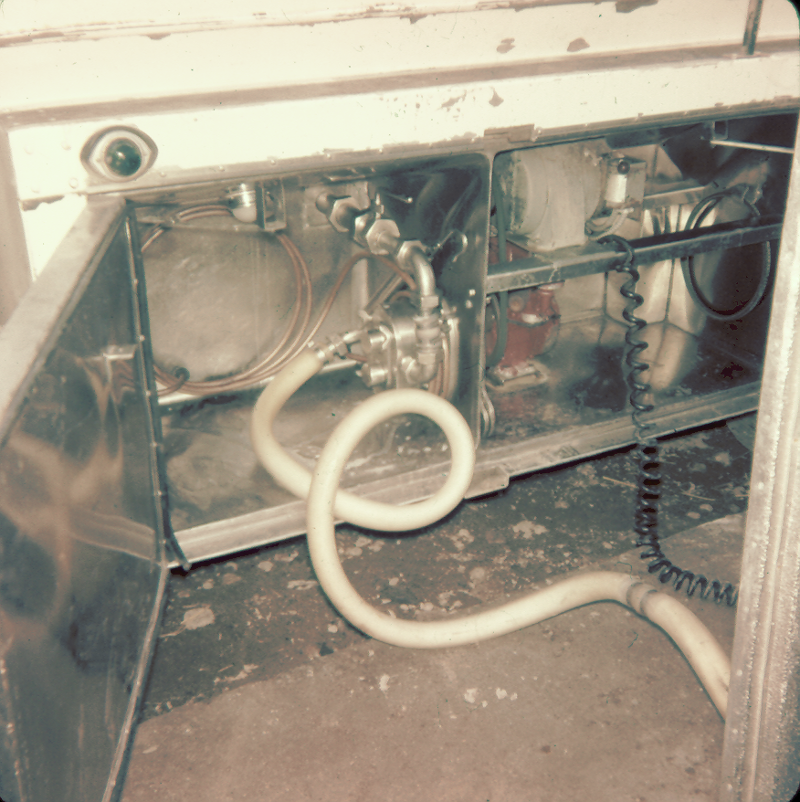 Outside, the dairy's tank truck pumps the cooled milk from the bulk tank through clear plastic hose.

Electricity from the milk house operates a small motor on the truck which is connected to a gearbox via a belt. The drive shaft crosses a partition to the stainless steel food quality pump rotor. Samples from each pickup were checked for bacteriological contamination and water content was also assayed. The latter was to guard against producers 'increasing' their production by running a water hose into the bulk tank.

At this point in history, the dairy was just up the road in nearby Lachute - drawing milk from about 30 farms. Milk was picked up every 48 hours (the minimum required capacity of the bulk cooler) ... but more frequent pickups were made if the weather was hot and the dairy's ice cream was selling well. 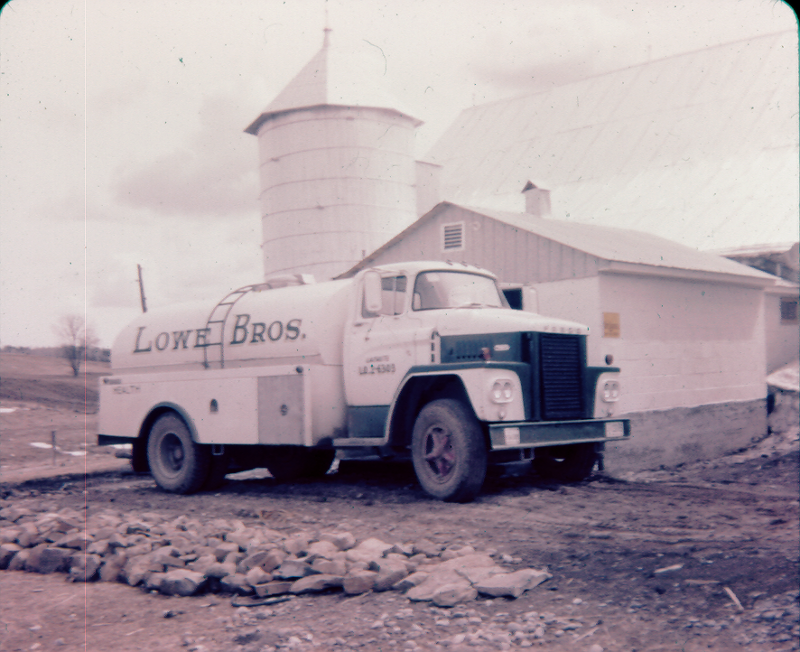 Here is an external view of the new 'milk house' and the dairy's truck on its special driveway.

In a post on another blog, I explored the local rail 'ecosystem' around my great-grandfather's farm.
There are additional materials on milk by rail, maps and timetables there.

Argenteuil Railways and a Lachute Map from 1937

The URL text for the post above is repeated below in case the link ever breaks.
http://genevapq.blogspot.ca/2015/01/argenteuil-railways-and-lachute-map.html