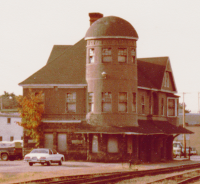 After 92 years, this building was still standing.
Would it see its 100th birthday? 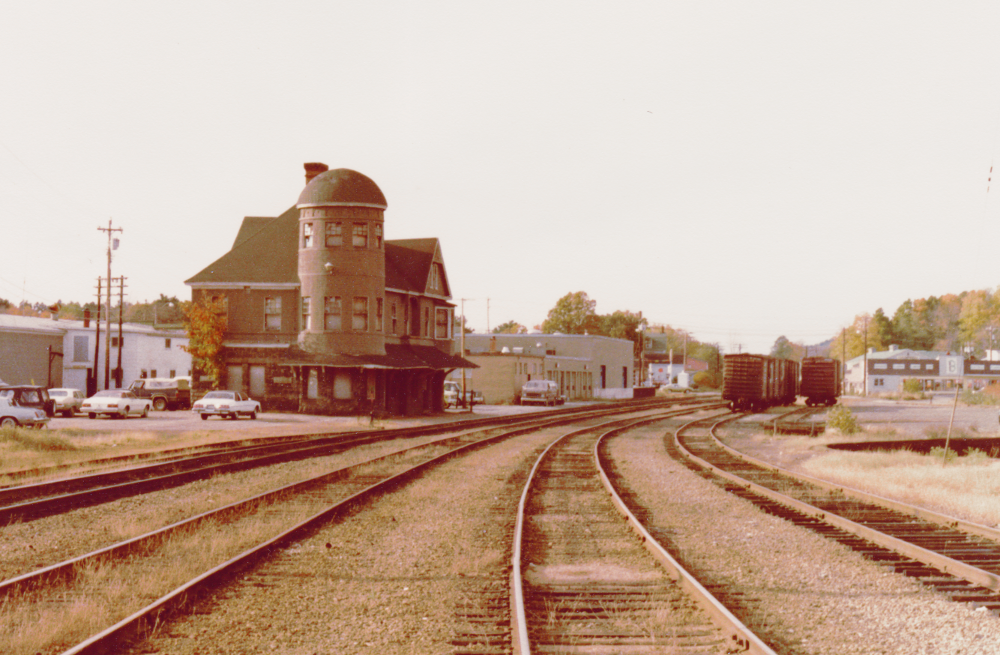 During our October 1980 figure-8 driving tour of Nova Scotia, including Cape Breton, I took a photo of an interesting station and we continued on our way to Yarmouth for the night.


Later I found postcards of this distinctive building. It burned down in December 1982.


During the last few months, I became aware that my father photographed the same station while using his annual railway vacation pass - received as a consequence of his being employed at CPR's Montreal headquarters. Thirty-one years apart, as junior employees in our early twenties, we had both selected October vacations. 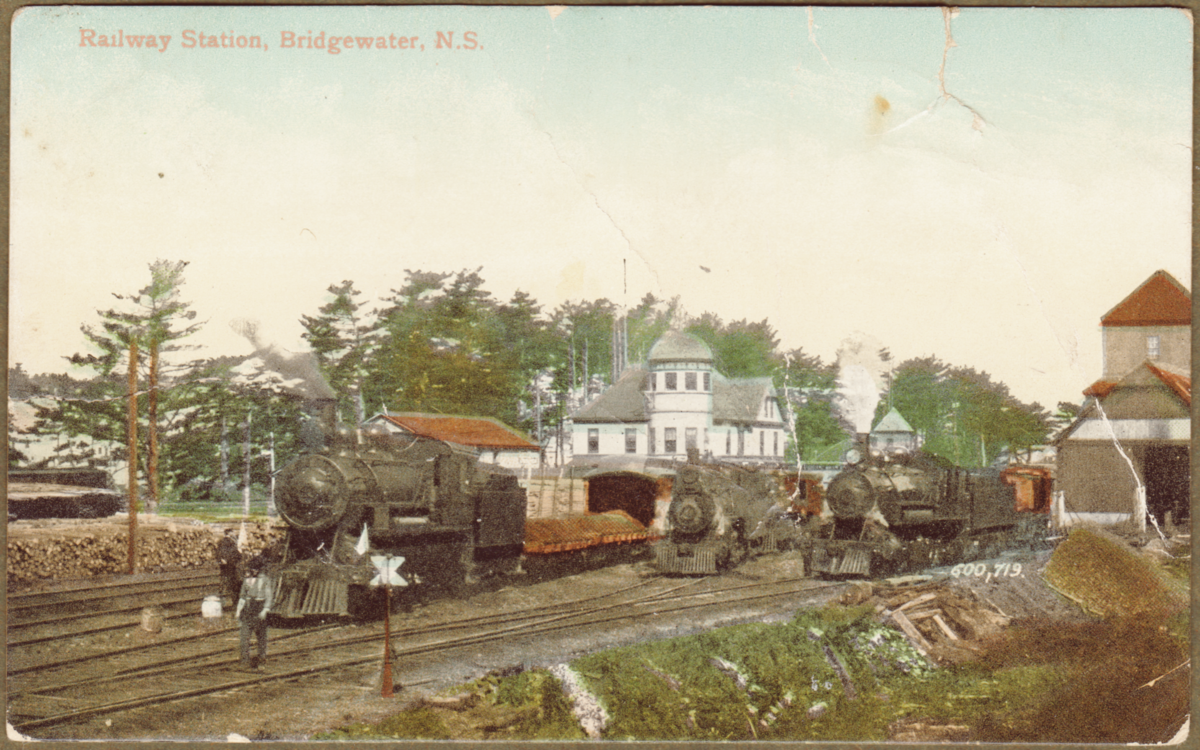 I'm not particularly good at naming railway antecedent companies. Roads like the Canadian Northern and Canadian Pacific scooped up small railways like trading cards for their government subsidies and legal charters. Eventually, the 'set of trading cards' could be arranged as a complete railway network.

This may be a postcard of the Halifax and South Western (or Southwestern) Railway at Bridgewater. A number of smaller railways' equity shares in this region were purchased by Mackenzie and Mann Co Ltd, then exchanged for shares of the Halifax and South Western Railway. (Source: The Canadian Northern Railway, Pioneer Road of the Northern Prairies; TD Regehr; 1976; Macmillan)

Lumber etc (at the left) was a key regional product which needed railway transportation - but those poles might be intended for railway use ... or as mining pit props? On this hand-coloured postcard, which was mailed in 1912, you can see a train heading out with a loaded flatcar perhaps to lay ballast or to fill in a wooden trestle - the two trackside kegs might contain hardware for this work. Two smaller engines are on the next track. In the background behind the large engine to the right appears to be a smaller station building which we will see again. To the right of that engine is an elevator building. Originally, it seemed to be a grain elevator, but it could well be a coaling facility.

Notice how light the rail is.

Bridgewater had been the headquarters for the various Canadian Northern lines operating along the south coast of Nova Scotia between Halifax and Yarmouth and across to the Bay of Fundy. The large station and shop facilities probably owe their existence to Bridgewater's geographically central location.

I posted the card above on my old website and was particularly tickled when an elementary school student in Bridgewater emailed to ask me if he could use the image for a school project. 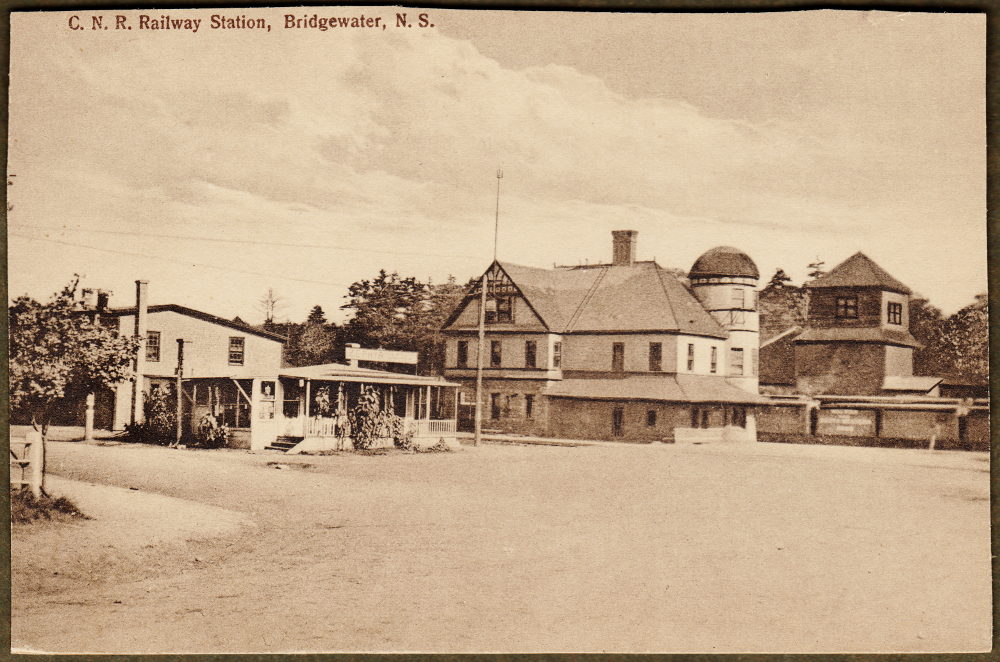 Here is an undated postcard of the station. It is now a Canadian Northern station. As this posting snowballed into a major research project, the mystery writing on the boxcar became clearer: 'Halifax and South Western' with probably a road number painted below. The only legible word on the sign above the verandah in the centre-left is 'ZEPHYR'.

While not as nice as a scan, the vidcap above spares this large century-old book. From Halifax, you can follow the coast to Lunenburg ... and Bridgewater is due west from that location. With the Canadian Northern well-established here by 1911 (census and data collection) and 1915 (atlas publishing), you can see the government atlas divides Nova Scotia between Canadian Northern on the south coast and Canadian Pacific along the Bay of Fundy. To the extreme right is the Intercolonial's yellow territory around Halifax.

But notice that the Canadian Northern also reaches southwest into the interior from New Germany and also across to Victoria Beach on the Bay of Fundy. Victoria Beach is very close to the CPR's steamship connection with the main CPR system - that is, between Digby, Nova Scotia and Saint John, New Brunswick. 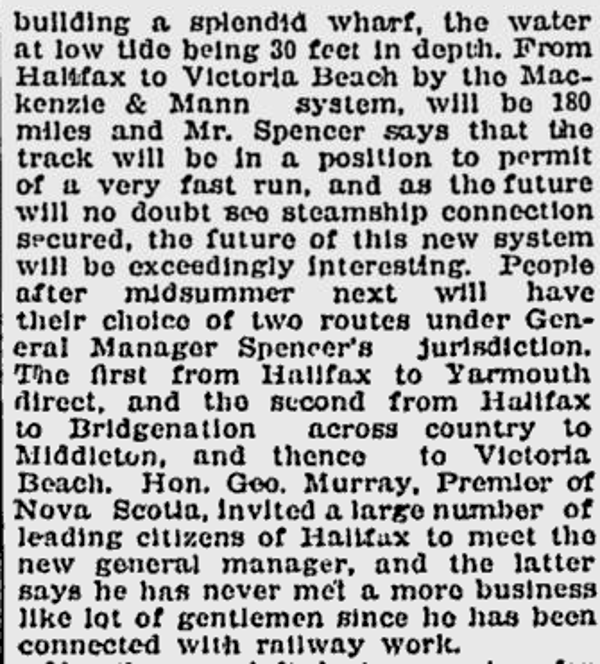 Above is an excerpt from an article in the Montreal Gazette of October 9, 1905.


Is it just me, or is everything happening in October?

By 'Bridgenation' the writer may have meant Bridgewater (don't you just hate 'auto-correct?'). If you look near the Bay of Fundy, there is also a Bridgetown.

... So the Canadian Northern will have fast track from Halifax to Victoria Beach where a future 'steamship connection' is intimated by CW Spencer - Mackenzie and Mann's visiting General Manager of their eastern lines.

However, referring to the Canadian Northern arbitration, circa 1917, Ted Regehr writes:


'There were some plans to connect the Nova Scotia mileage with the rest of the system, either by means of the Intercolonial or by the construction of the Quebec, New Brunswick and Nova Scotia Railway.'

Speaking of the Intercolonial ...

Above, you can see the Halifax and South Western's route into Halifax, running parallel with the Intercolonial along the waterfront.

In 1912, the Minister of Railways had an engineering survey done of the harbour with a view to upgrading it. Facilities to dock 20 to 30 full-sized ocean steamships were recommended. A contract was awarded in 1913 with a completion date of 1917.

The Great War began in 1914. The Halifax Explosion of December 6, 1917 destroyed the old dock area shown above and the railway facilities.

Three Timetables from the Area


The earliest timetable comes from the Official Guide of 1916.

You can see branches into Lunenburg and from Liverpool to Rapid Falls in the upper table.

In the lower table, notice the train operating from Caledonia and Brookfield Mines (in the interior) to the seaport of Lunenburg.

There are many interesting little bits of history in the economic development of this area. In addition to Wikipedia, Kenneth Gansel wrote an interesting article in the Canadian Rail No 317 of 1978 which goes into some of this history.

* Table 51 shows the Canadian National Railway main route from Halifax to Yarmouth.
* There are only mixed trains on this line as World War Two nears its end. Non-essential civilian travel was discouraged to conserve resources for the war effort.
* Notice the (rail) motor car passenger service on the branch to Lunenburg.
* At Lockeport, as a passenger on the mixed train, you have 15 minutes to grab something to eat at the lunch counter.
* You can't travel by steamship between Yarmouth and Boston or New York. Earlier in the war, the US cities were not blacked out and this greatly facilitated the work of German U-boats in sinking coastal oil shipments etc. as they had silhouettes of ships to aim at. In October 1942, the Newfoundland ferry Caribou (travelling with a navy escort) was sunk with the loss of 137 lives - by a U-boat ... travellers are instructed in this timetable to contact company agents for sailing times to Newfoundland.

* Tables 51A and 52 give good detail on the other former Canadian Northern lines near Bridgewater.

* You will notice above that the railway has two 'Bridgewater places'. That is fine, but in fact there are THREE 'Bridgewaters' and that fact is what turned this 'little 5 photo post' into a longer research project.


In the post-war prosperity, roads and private autos drew people away from passenger trains. As well, it is possible mail was being moved by truck in 1957, eliminating a subsidy which kept many low-demand passenger trains running.

This employee timetable shows the Chester subdivision - 109 miles long - and if you look at the footnotes, you will read that terminal clearance is required at Bridgewater. This will come up later.

In 1949, my father probably travelled west from Halifax on train No 87, a passenger train which still ran shortly after the war.

Usually after a few decades, one can still see the traces of railway tracks and facilities from above. GoogleEarth is particularly useful for this. However, I was having great difficulty finding the original location of the Bridgewater station in the town of Bridgewater. From what I could detect, my father's photos did not match up at all.

The map above shows the railway lines well in grey. You can see the line from Halifax coming in from the northeast. From Mahone Bay to Lunenburg is one of the old branches. Bridgewater is the large yellow area. The line to Yarmouth continues to the southwest. The line toward the Bay of Fundy runs toward the northwest.

At Bridgewater, the original town is at the left and that is where one would expect to find the station. The line completes a turn of about 180 degrees as it crosses the LaHave River. A train arriving from Halifax sees the round turret of the station first ... I discovered.

My father travelled via the Maine short line to Saint John ... across to Digby ... via CPR running rights into Halifax ... then CNR from Halifax to Yarmouth ... CPR back to Digby for a return to Montreal.

This account from an old newspaper helped sort things out ... 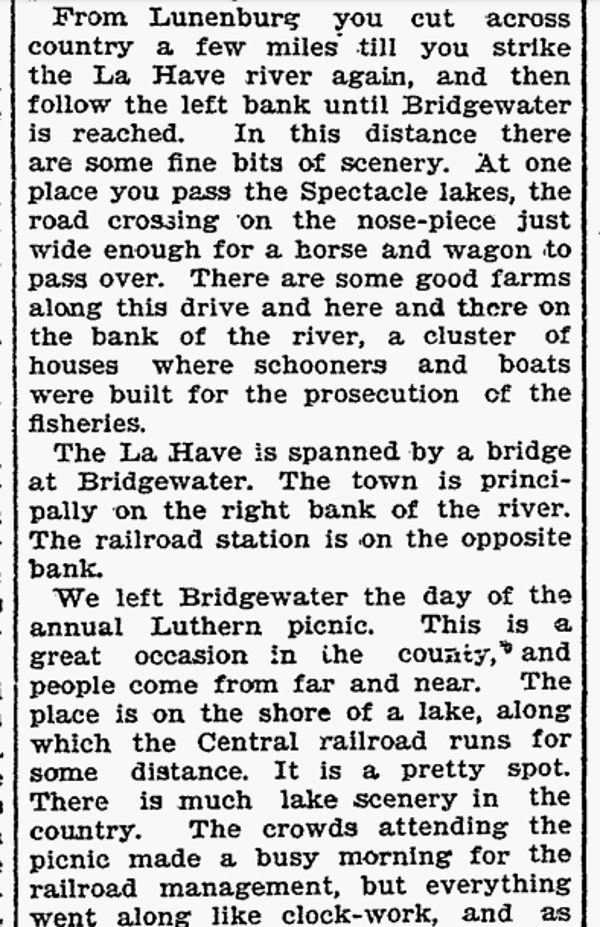 The TOWN is on the right bank. The station is on the LEFT bank of the LaHave river.


Below is a current view of Bridgewater. Some of the roadbed is preserved as a trail, so you can still see the hairpin of the main line ... and the switch and its tangent toward the Bay of Fundy. The original bridge is used as part of the trail.

However, the former location of the station was still not obvious.
(If anyone from the area is reading this, they are now shouting at the screen) 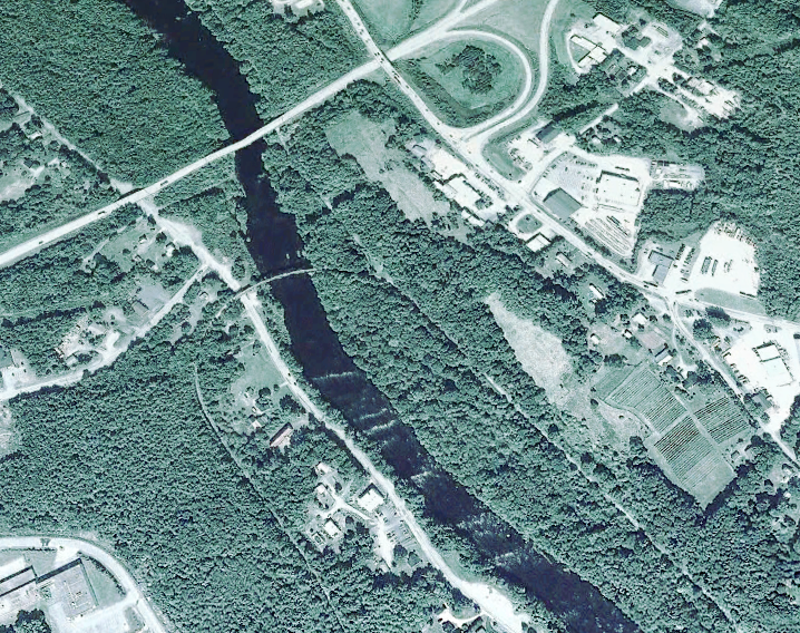 My father's photos from October 1949


This is stated as being 'near Bridgewater'.
This is probably not the LaHave River at Bridgewater.

Here is westbound No 87.
After some study, I believe this is the bridge over the LaHave at Bridgewater.
In this view, the train has left the station
it has passed the switch at Bridgewater Junction
and it is about to travel through the original settlement at Bridgewater.
This train is still carrying mail - the first door after the power.

The last two photos are in chronological order ...


This may be someone my father just met on the train, but I don't know who he is. The conductor is keeping his eye on the headend and the loading of baggage. The turret is on the 'Halifax end' of the station. The 'smaller station' can be seen beyond the conductor.

Where is the train order signal? There is none on either building. But as the 1957 footnotes indicated, a terminal clearance must be issued here so all trains must stop here for 'paper' of some sort.

I did not straighten this photo or crop it to avoid losing the station's date, to the left, 1888. The old-style CNR station sign with the black beveled sides can be seen.

In today's local geography, where is the station? 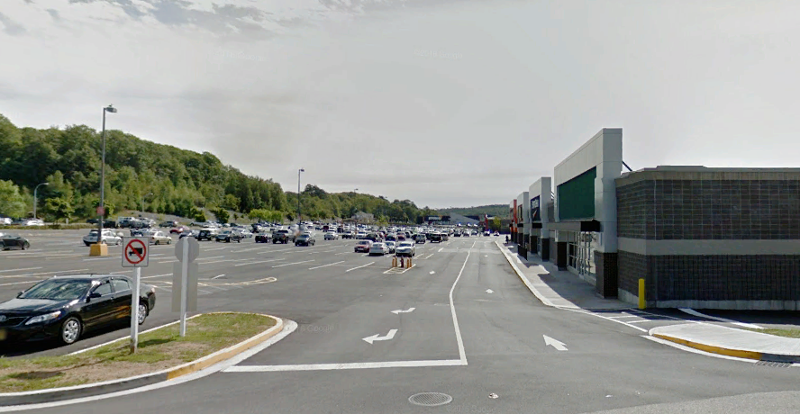 The view above is arranged to be as close as possible to the location of the second and last photo my father took of the station. In both cases, a large area of flat land is being used as a place for buildings and transportation equipment.

Guessing at rail features from left to right ...
There seems to be a small gated yard with rail and other metal equipment.
Caboose track.
Enclosed (heated) water tank with its ball (float indicator) showing a full tank.
Switch locomotive - tender facing us.
In the distance, between the ice refrigerator car and that caboose, seems to be a coaling tower.
The 'Yarmouth end' of the 'smaller station' can be seen behind the car on the house track.
The track to the right is most likely an industrial siding.
Posted by David J Gagnon at 21:52
Email ThisBlogThis!Share to TwitterShare to FacebookShare to Pinterest
Labels: 1910s, 1940s, 1950s, Bridgewater, Canada history, Canadian National Railways, Canadian Northern Railway, CNR, Halifax, Halifax and Southwestern Railway, map, Nova Scotia, railroad, railway, timetable, World War Two
Newer Post Older Post Home