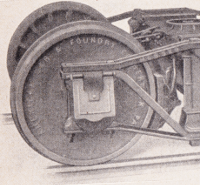 This post looks at how a typical boxcar, during the first century or so of North American railways, carried over 40 tons of weight on the 8 outer ends of its axles. The post is intended to provide background for a subsequent post on the CPR's booklet of instructions to carmen and running trades employees, issued during World War Two.

Below are two simplified wheelsets. The axle stubs protruding through the wheels are known as 'journals' - to be more specific, the journals are the turning surfaces which actually bear weight.


The journal, the metal bearing resting on it, a lubrication system, and other bits are housed in a 'journal box'. An overheating journal/bearing set was generally known as a 'hotbox'.


After 1963, permanently sealed and lubricated roller bearing systems replaced 'plain bearings' on new cars manufactured for interchange between railroads in order to meet AAR standards. I saw some plain bearing ballast/slag/ore cars used only for company service which survived into the 1990s on the CNR.


Notice that as technology progresses, a more descriptive name must be created for the original version to differentiate it from recent inventions. For example, what was once known as 'a telephone' is currently 'a landline phone' because newer technologies can now be used to transmit two-way voice communication.

Let's design a "plain bearing" now, because in the future I want to invent a "fancy bearing"!

Here is a photo of a burnt-off journal. This could occur if a 'hotbox' was not seen (or heard, or smelled) in time by crew members watching their relatively short train from the headend and tailend. While a hot, smoking bearing might be easy to sense on a summer day with the caboose windows open ... it would generally be harder to detect at night during a raging blizzard.


Considering the example above, this is what could go wrong after a failure: Instead of the journal carrying part of the car's weight, that weight will be dragging directly on the track structure. If the truck assembly breaks down further and/or if the dragging equipment hits an object such as crossing timbers or a switch - a derailment would be likely to occur.

Above, the top truck is generally referred to as an 'archbar truck' today - for obvious reasons. It was manufactured by bolting together mainly forged or rolled parts. But in railroad service, some of these bolted bits might eventually work loose and the truck might disintegrate, causing a derailment.

Circa 1900, William P Bettendorf (1857-1910) invented the single-casting truck side frame (above) which literally bears his name.

If you have visited a railway museum where they offer novelty rides on small unsprung maintenance of way trailers pulled by a track speeder ... you will know first-hand how utterly harsh and bone-jarring steel wheels on steel rails are. If only to help protect the freight, the carbody and the track structure, it really makes sense to have some kind of shock absorbing system between the load and the rails.

On the diagram above, the weight of the boxcar body and its load rests on the centre plate (1) which is part of that truck bolster (7) which spans the two truck side frames. Going around curves or on uneven track, the body may tilt a little and place some weight on one or both of the two side bearings (6).

The truck bolster rests on sets of springs (2). This is the end of the cushy 'sprung' part of the boxcar ...

The truck side frames (3) - such as those which were invented by William Bettendorf - hold the bottoms of the springs. The side frame eventually transfers the weight to a bearing which sits on the journal. So it's solid metal on metal from the bottom of the springs to the rail.

The diagram above looks at the end of a cutaway journal box as seen from the side of the track.

The black perimeter represents the cast truck side frame.

Working down from the top, you have:

In 1839, Isaac Babbitt began inventing alloys which could be used to line bearings to make them more efficient. Our bearing itself is cast out of brass - sometimes railway bearings are referred to as 'brasses'. On a microscopic level, the 'babbitt' lining the bearing is an alloy of hard metal crystals held within a softer metal. The soft metal wears away a little but the hard crystals stay put and bear the load.

Babbitts in the Movies


This movie illuminates so many aspects of railway technology, processes and physics that it should be owned by all. The roughness and simplicity in this sequence helps show why railways embraced the practical advantages of babbitt lined brasses for decades. (But we should acknowledge that the movie makes it look a lot easier than it probably was)

... After a locomotive lubricator is sabotaged to foil the Nazis, its bearings must be repaired by casting new babbitts onto them. Above, Burt Lancaster (doing his own stunts in the movie) ladles the molten babbitt alloy into a mould set around 'the brass' to be repaired. You can see some of the 'white metal' flowing out of the form at the lower right corner as it purges air from the mould.

The mould and wedges are knocked off the hot casting. You can see an example of the finished product fitted into the locomotive siderod in the background. In the foreground is the brass with its new lining and flash which must be knocked and filed off. At the right, the metal block which looks like a food can was the part of the form which was used to cast the journal shape into the babbitt in the mould.

Finally, the half-bearing is fitted into the siderod, the quality of the fit is checked by feel, and any remaining grit is removed by hand.
This is a 360 degree siderod bearing/babbitt, while our freight car brasses just sit on top of a journal.

... Getting back to the freight car journal box ...

The turning journal picks up a coating of oil from the lubricator fabric in the journal (oil) well. The oil reduces the friction on those hard-working hard crystals in the babbitt alloy - the oil travels among the crystals via the little spaces where the soft babbitt metal wore away. The oil carries away some of the heat produced at the point where the babbitt and journal rub against each other.

Above, right, is the journal box as seen from the front with the wedge and bearing - similar to the diagram showing the packing and oil seen previously.

Notice that the axle makes no contact with the back of the journal box where it enters - above and below the 2 1/2" notation.

This rear seal area was a classic problem area for journal boxes in regular service, as oil would be lost out the back and splatter onto the wheel, while dirt and grit would enter the journal through the defective rear seal in exchange ... But there must have been reasons for this looseness, don't you think?

Just considering our narrow focus on the bearing ...

If a jack were placed under the journal box (remember it is part of the truck side frame), it would take the car weight off this wedge and bearing. Using a tool (for safety in case the jack slipped) ... the wedge and then the bearing could be removed.

If a car bearing was poorly lubricated and/or worn down and overheating on a train, in some cases, the simplicity of the plain bearing system enabled an operating crew to remove the defective bearing and replace it with a new one. The caboose carried these supplies and 'car oil' too.

"No 3609 pulls out of Carmi with two flat cars of road-building equipment, a tank car, and a caboose. The crew had discovered a hotbox on one of the flat cars, jacked up the truck and changed the brass with only 15 minutes' delay."