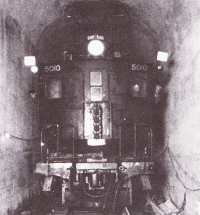 Sleeping car accommodation on Great Northern trains is illustrated in the final section of this timetable. This post also looks at the use of electric motive power in the area of the Cascade Tunnels.

The Empire Builder of the Great Northern Railway crosses the Stone Arch Bridge
which connects Minneapolis and St Paul over the Mississippi River in this undated photo.


This timetable is posted in sections which are all linked
to the Great Northern Railway portion of the following sub-index page of this blog: 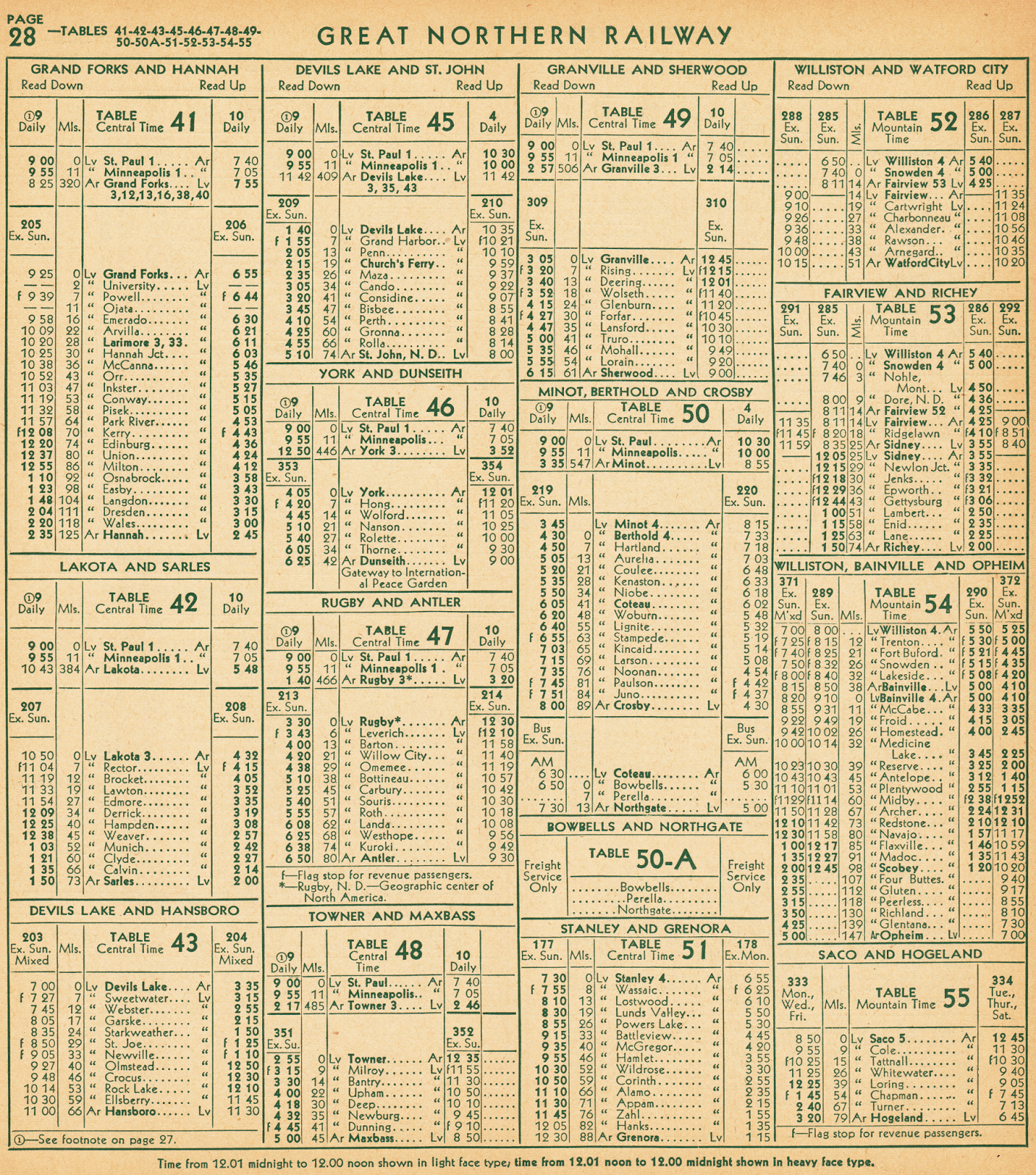 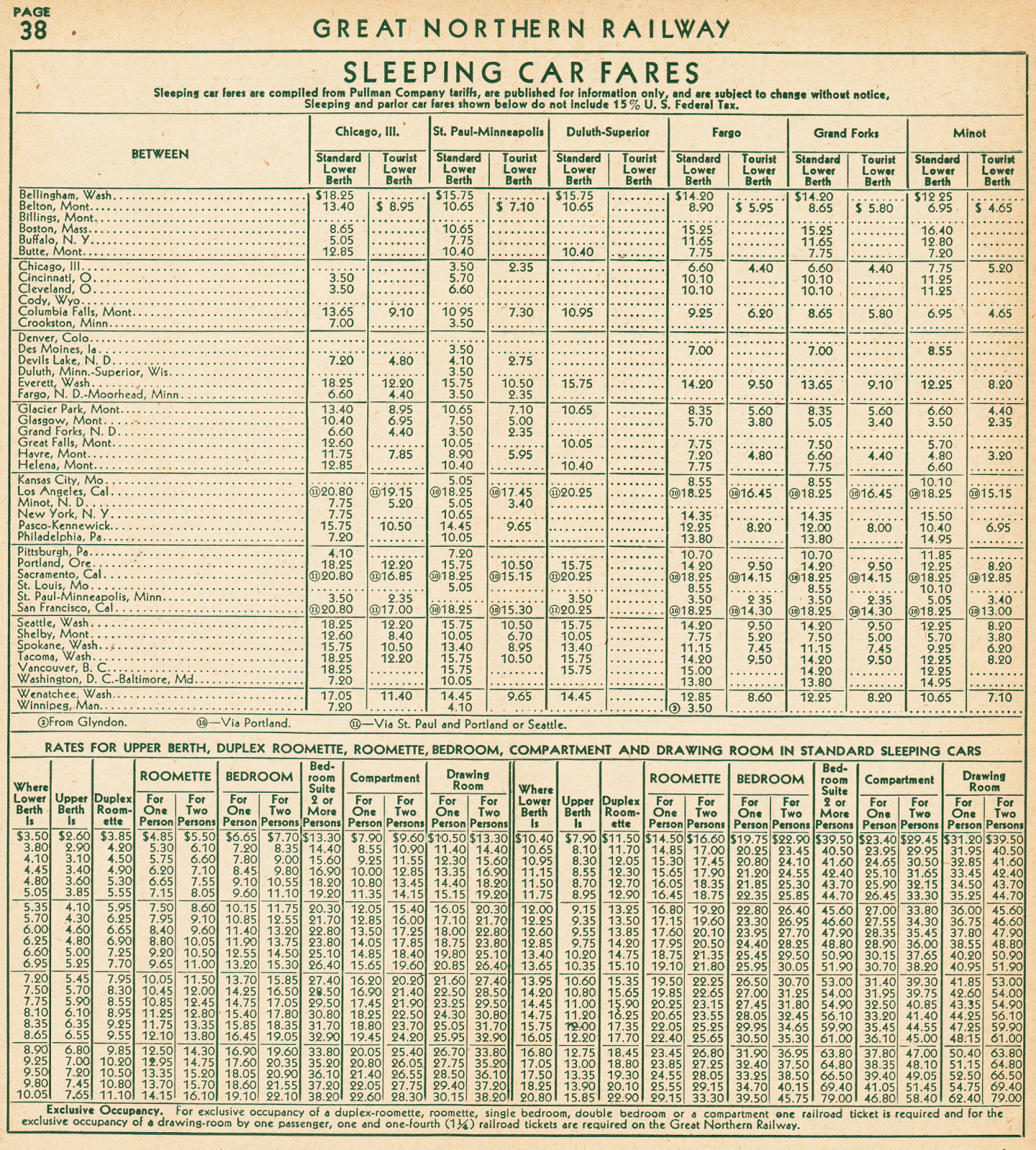 Electric Locomotives in the Cascade Tunnels


Connected with the original Cascade Tunnel was an electrified section of main line which was less than 6 miles in length. Four GE boxcabs constituted the entire fleet of electrics used on this section.

Any steam locomotive fired up in the confined space of the tunnel threatened to suffocate people occupying the same space. In particular, operating eastbound up the 1.7% grade with a passenger train offered the gravest scenario ... if the locomotive crew became incapacitated before or after a train stalled, the passengers and employees on the train might suffocate before they could evacuate to safety.


The four B-B units shown were used from 1909 until 1929 - when the new Cascade Tunnel opened. The 3-phase power system used the two trolley poles and a rail as conductors. The wide spacing of the trolley poles was supposed to offer greater protection to brakemen from the overhead wires as the brakemen worked to apply or release rooftop handbrakes during normal train operations.

This relatively primitive locomotive/power system initially restricted speed to 15 mph and train size to 1600 tons. With doubling of consists up the tunnel grade being necessary as train size grew, brakemen would certainly have been on car rooftops to tie down hand brakes on any remaining train sections.

Later, an innovation permitted all four units (two on the headend with the steam locomotive, two on the tailend) to operate together at 7.5 mph while using less current. Previously, operating four units together would have exceeded the capacity of the nearby power plant.

... The train's steam-powered road engine stayed on the train through the Cascade Tunnel - so technically, the electrics were in helper service. However, given the aforementioned suffocation hazard, only enough steam was worked to prevent the steam locomotive from dragging against the efforts of the electrics.

For timetable, maps and profile, see:

Switchbacks and Tunnels in the Cascade Range


Beginning in 1927, the electrification ran from Wellington (aka Tye) to Skykomish - 21 miles. At the same time, construction was taking place on route modifications to allow the GN to abandon much of its extensive system of snowsheds in the area ... and to improve gradient, curvature and protection from spring flooding.


Above, at Skykomish, Washington in 1928, new electric power was undergoing trial operations as the new tunnel and re-engineered track routes were being constructed.

Given the eight mile length of the new Cascade Tunnel, operating steam locomotives were effectively prohibited there. Operations became more consistent with traditional urban electrifications - where steam power was cut off and electric locomotives were substituted over a particular section of track.

At this point, regenerative braking by the electric motive power came into its own as an effective method for controlling trains while descending steep grades. In Wood's book, it states that a frozen brake pipe (i.e. water from compressed air freezing, obstructing the train line, and interfering with control of the train's air brakes) was always a risk which could have led to runaways on the steep grades.

Eventually, the electrified section which included the new Cascade Tunnel extended for 73 miles - from Wenatchee to Skykomish, Washington. Using the new electric motive power on 5000 ton freights, the Great Northern's practice was to place part of the power consist within the train - rather than pushing on the tailend. The improvement in train handling from this practice compensated for the additional time required to cut the distributed power into the train.

A work train in the new Cascade Tunnel before its opening, showing the close clearance within the bore.
Refuge bays were located every 2000 feet.

At least one YouTube video was taken in the tunnel from the tailend of an Amtrak passenger train circa 2017.
If viewed on a sufficiently large TV screen, a few pixels of light from the distant portal are still visible as the train and camera exit the tunnel.
The video is not linked here to avoid the frustration of dead links for future readers.

The Great Northern W-1 locomotive is shown above. There were two of these built by General Electric for the Great Northern. They were used between Skykomish and Wenatchee from 1947 until 1956 ... when the electrification was shut off and diesel power was substituted. Unlike GN's other electrics, these powerful units were not equipped for multiple unit operation.