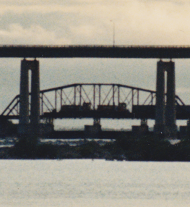 Why did the CPR buy the Soo Line?

Some photos from 1985, and older documents, look at the Sault Ste Marie branch of the CPR. There are postcard views of the bridge. Maps and a locomotive roster of the Soo Line from 1958 are included.

And eventually ... the events leading to the CPR's cross-border adventure south of Lake Superior become clearer. 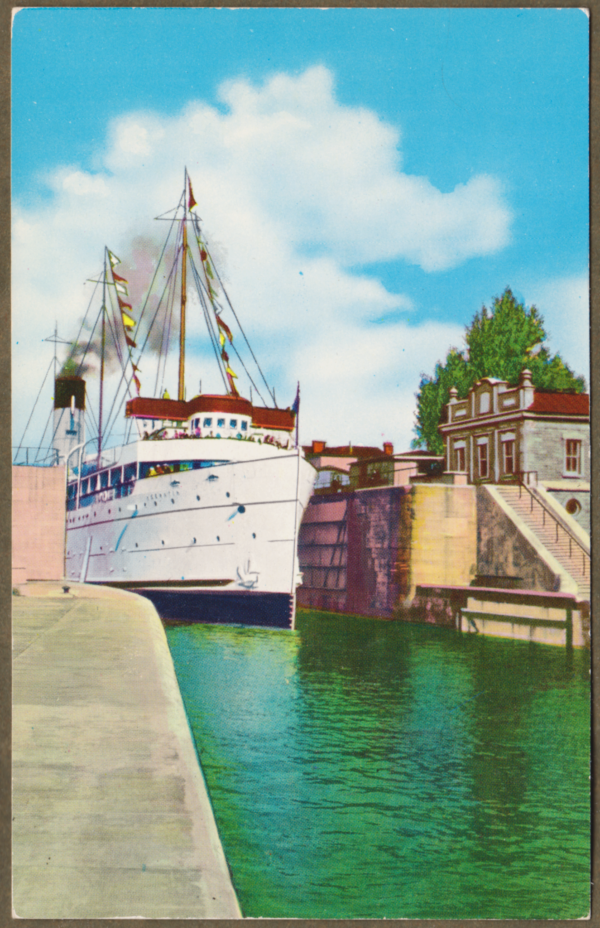 From the 1950s, the CPR steamship Keewatin is seen leaving the Canadian lock. 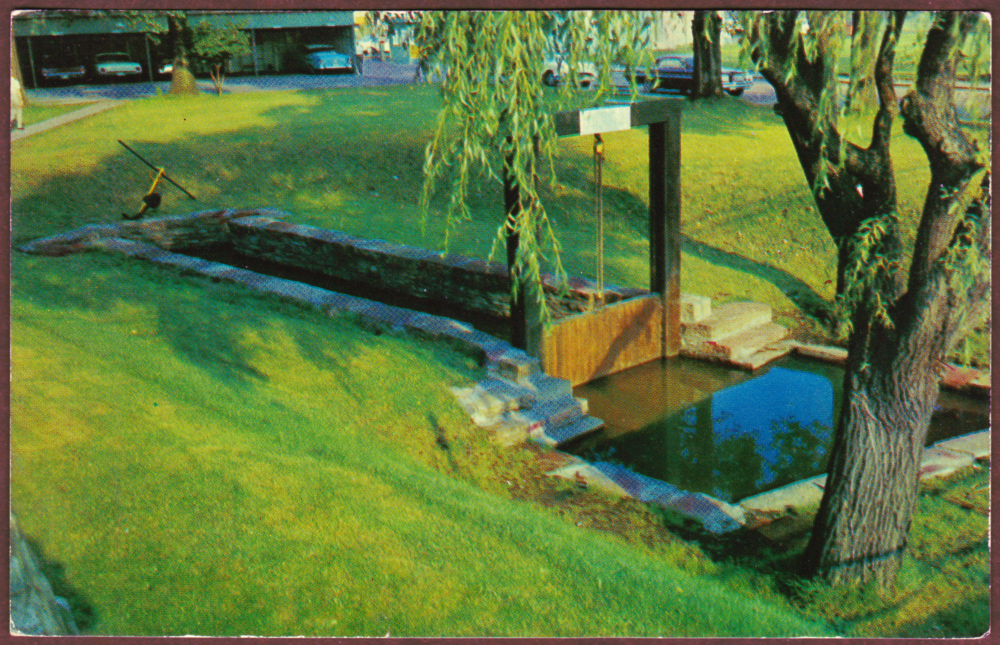 'A restored portion of the original canal and locks at Sault Ste Marie.
This historic canal was built by the North West Company in 1797-8
to float freight canoes and bateaux around the St Mary's Rapids.'

American forces destroyed that canal during the War of 1812. Neither of those vessels would fit in that lock. Various versions of this canal display appear in postcards.

Once again, here is part of the Canadian railway bridge. A great deal of Sault Ste Marie's history can be seen in this view of a steel mill, a paper mill and a power station. The Canadian canal and lock are seen with the swing span of the railway bridge across it.

Above is a 1915 railway map showing the lines between Sudbury and Sault Ste Marie. The Algoma Central 'railway territory' appears at the left. Two areas of Algoma Eastern turf can be seen - to Little Current and to Rock Lake (I think). The Canadian Northern is visible at the upper right corner.

Railways supplied their surveyed points for publication in this government book.
The right column shows feet above sea level.
A coarse line profile can be derived from this data.


Here is another map from the 1915 government atlas. This shows the telegraph network. At the left, the Algoma Central's line is recorded as not being continuous. Not shown: A telegraph line descends from the CPR system at Franz to reach Michipicoten Harbour. The system features around Manitoulin Island are also interesting.

This view may have been taken from the Agawa Canyon train. 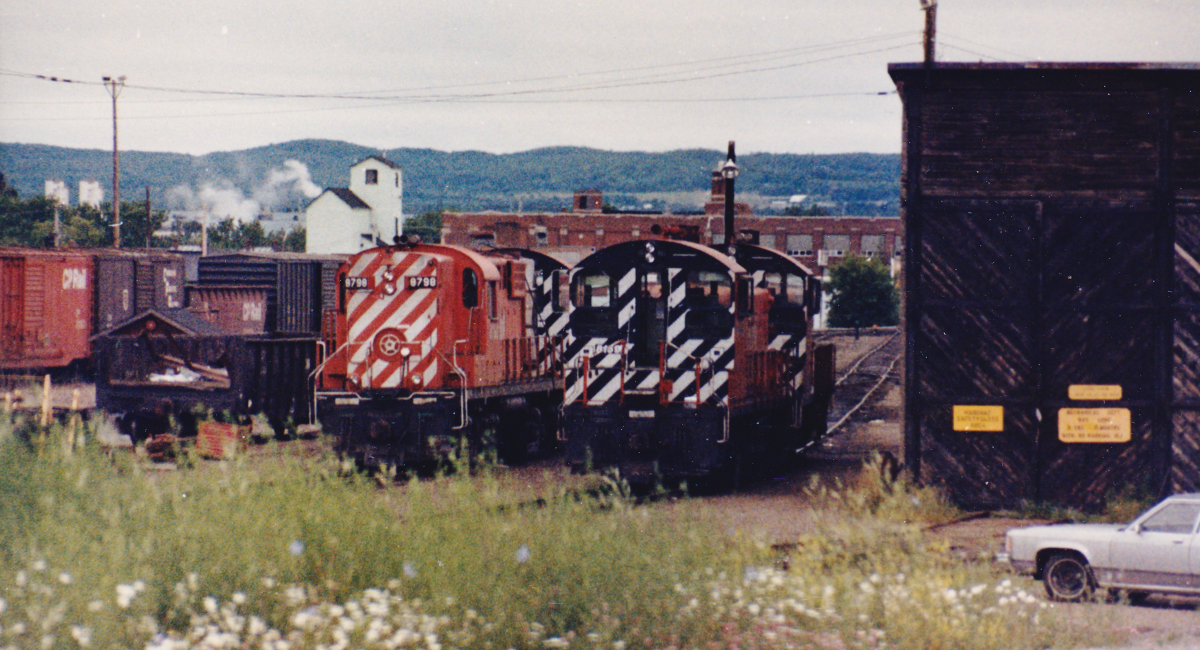 Power at the shop similar to views in the previous part.

Many people have photographs of this equipment. 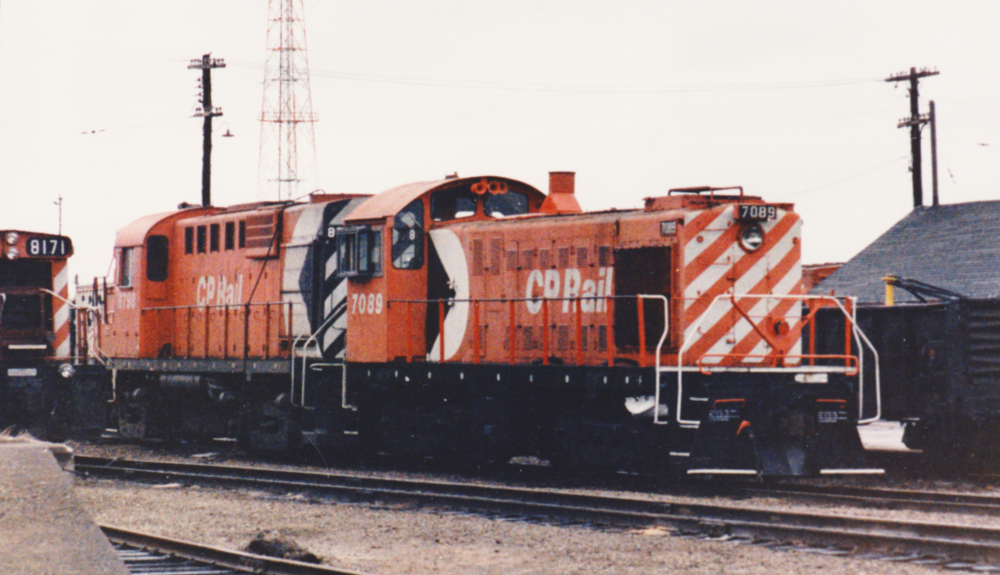 I believe all of these views were taken on the north (roundhouse) side of the yard. 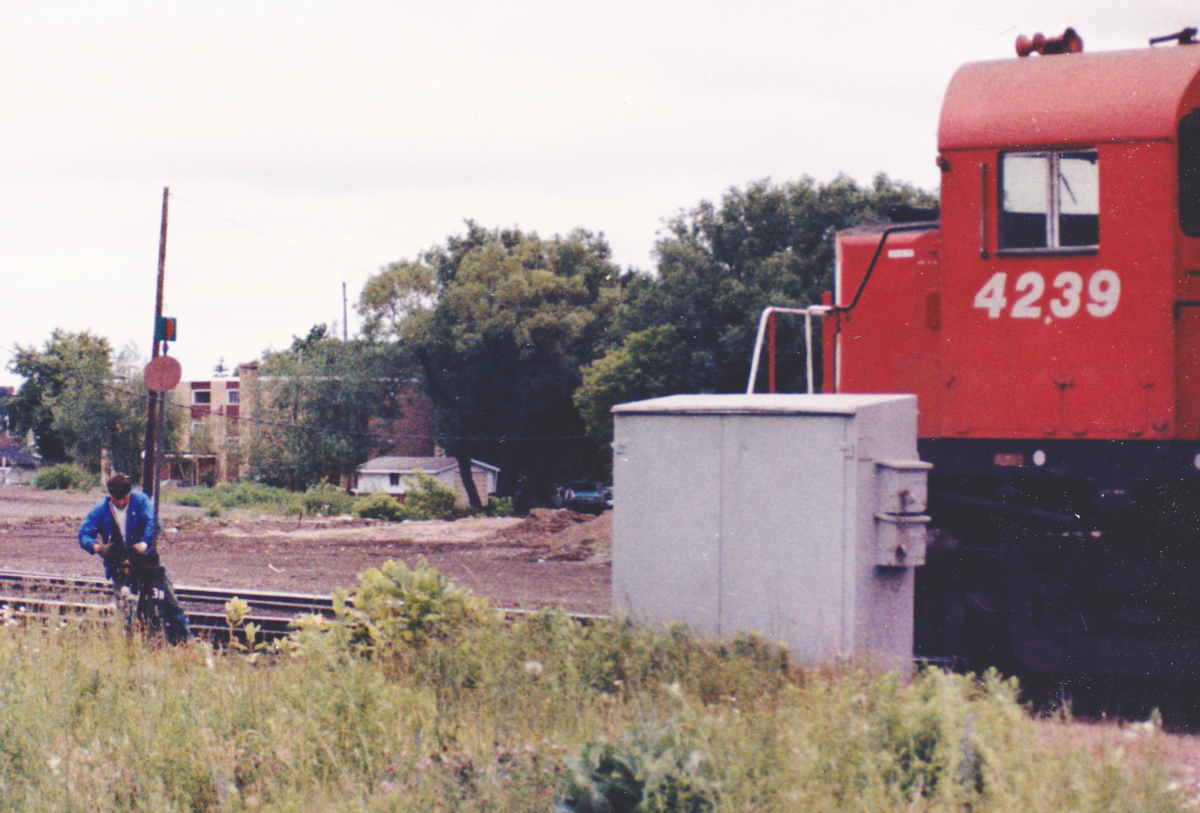 In an action repeated hundreds of times each day across the system,
a trainman throws his weight against a switch handle. 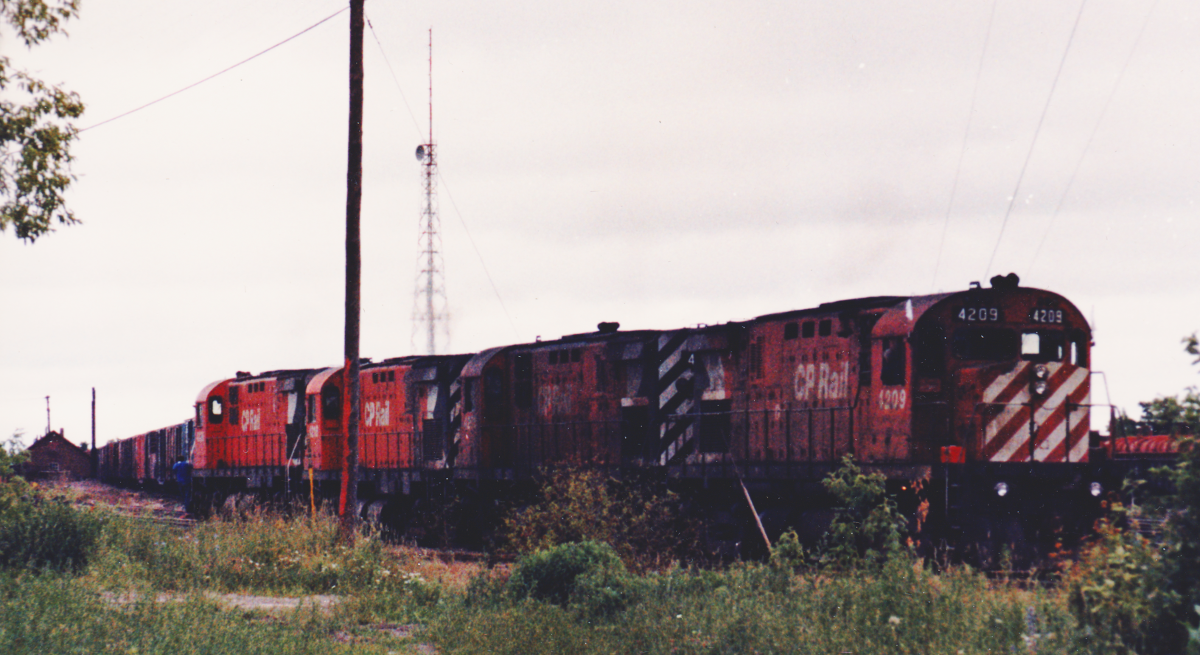 It seems likely this was inbound power from a westbound tying up at the shop.

A US-bound Soo Line movement approaches the absolute semaphore protecting the swing span.
The bridge is lined for him, so the canal may be busy on the US side. 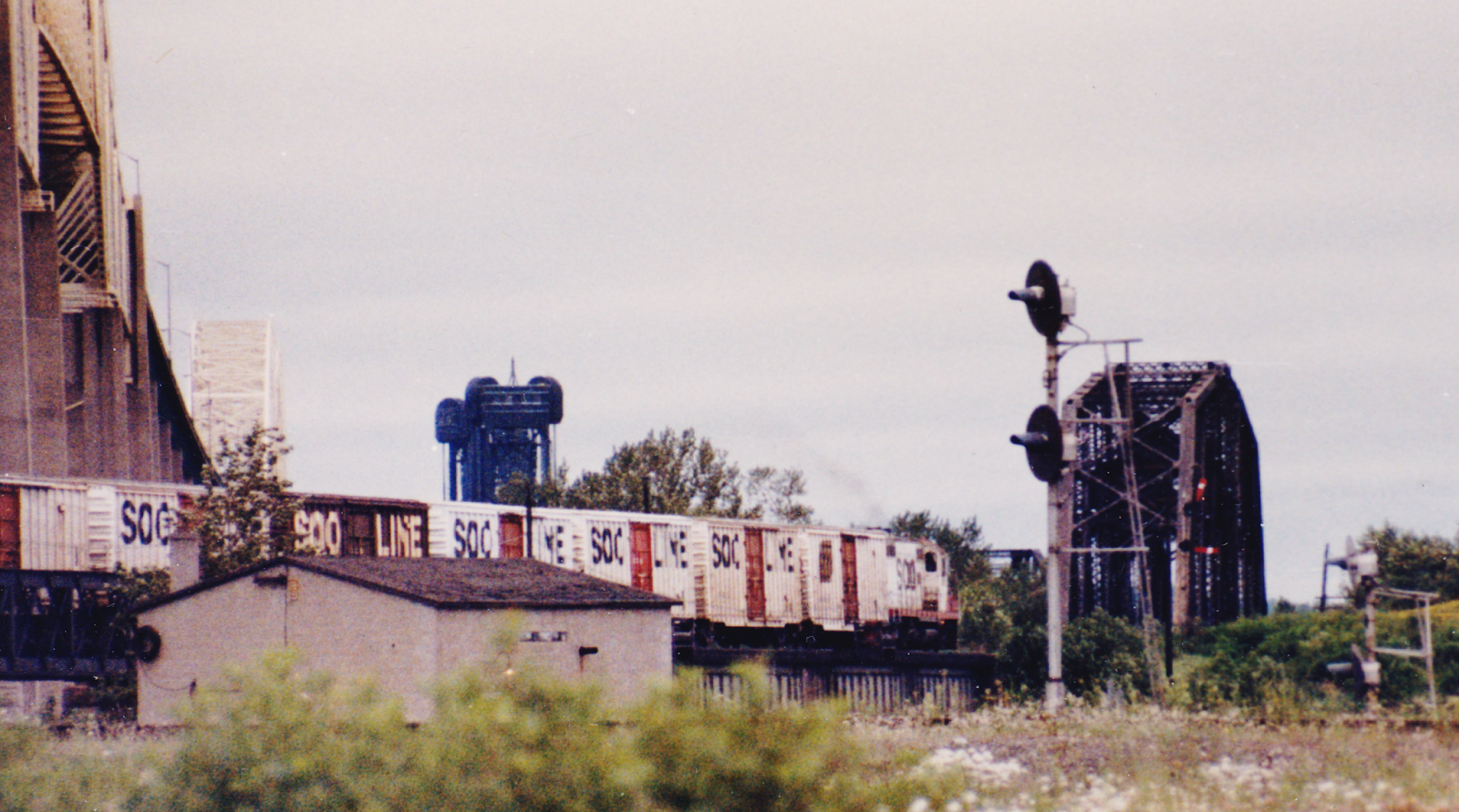 The Soo Line movement is taking his clear signal. After some furious driving, you can just see the tailend disappearing beyond the swing span. 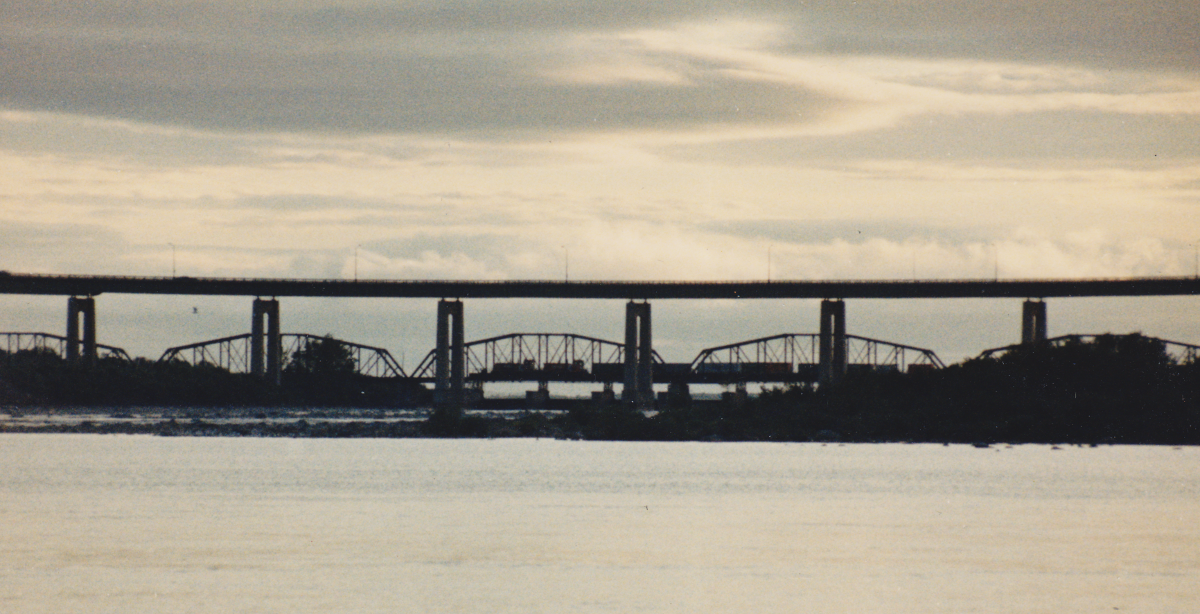 A evening shot from near the hotel of the common power arrangement used by the CPR to take a transfer over. 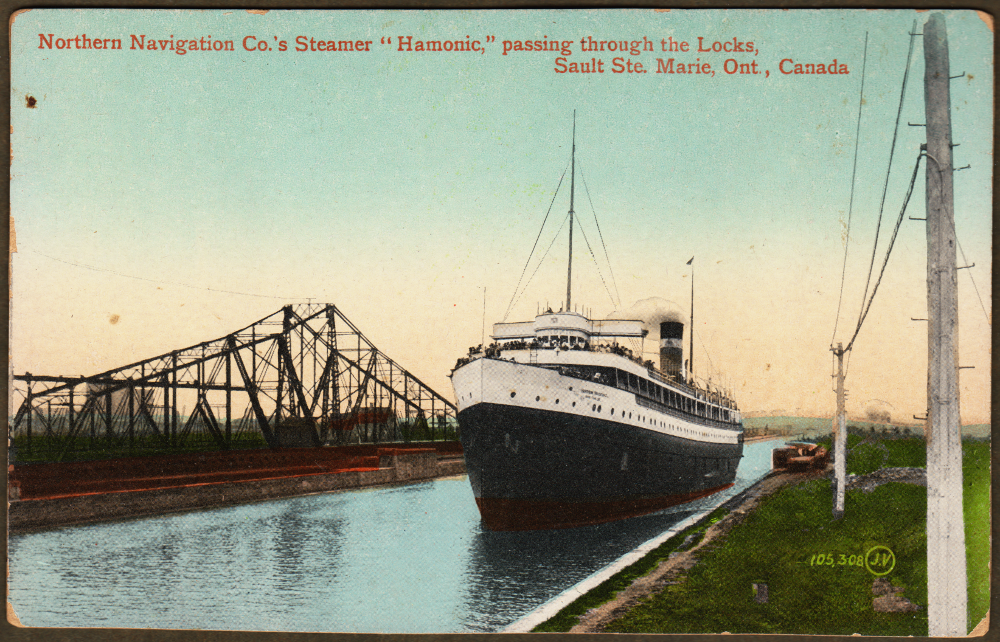 The Hamonic is upbound to Lake Superior.
With the railway bridge behind the camera, you can see the emergency swing dam to the left.
It was last used in 1909 when a ship broke a lock gate and all of Lake Superior began to empty through the canal. 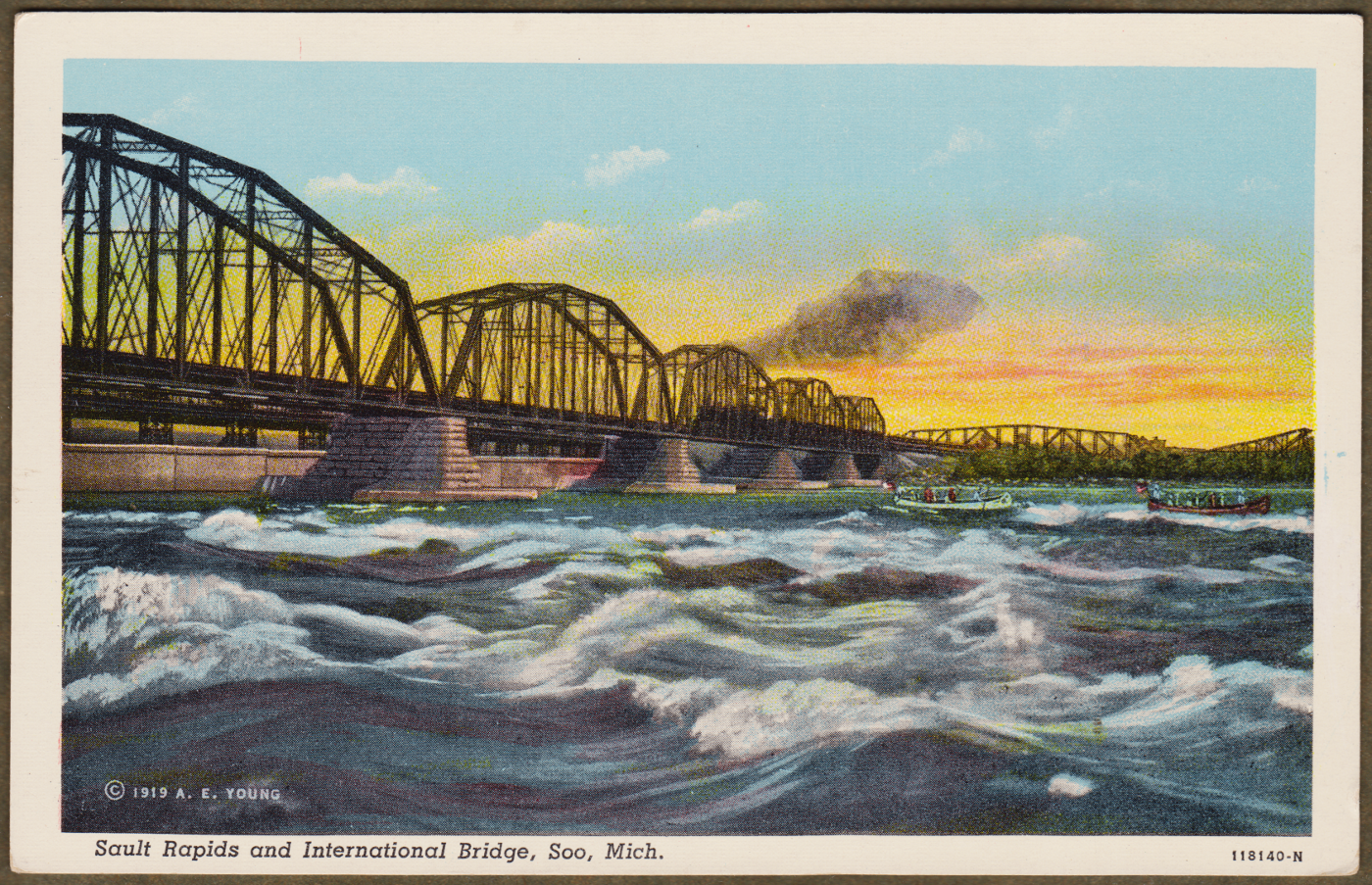 Except for the land supporting the camera, almost everything shown is north in Canada.

The Chicago-produced postcard above makes the image more interesting with added details.
It seems unlikely that canoes would travel through the compensating dam at the left.

Behind the canoe at the right is the emergency swing dam.

With your knowledge of the swing bridge,
see if you can explain why the train must be added artwork. 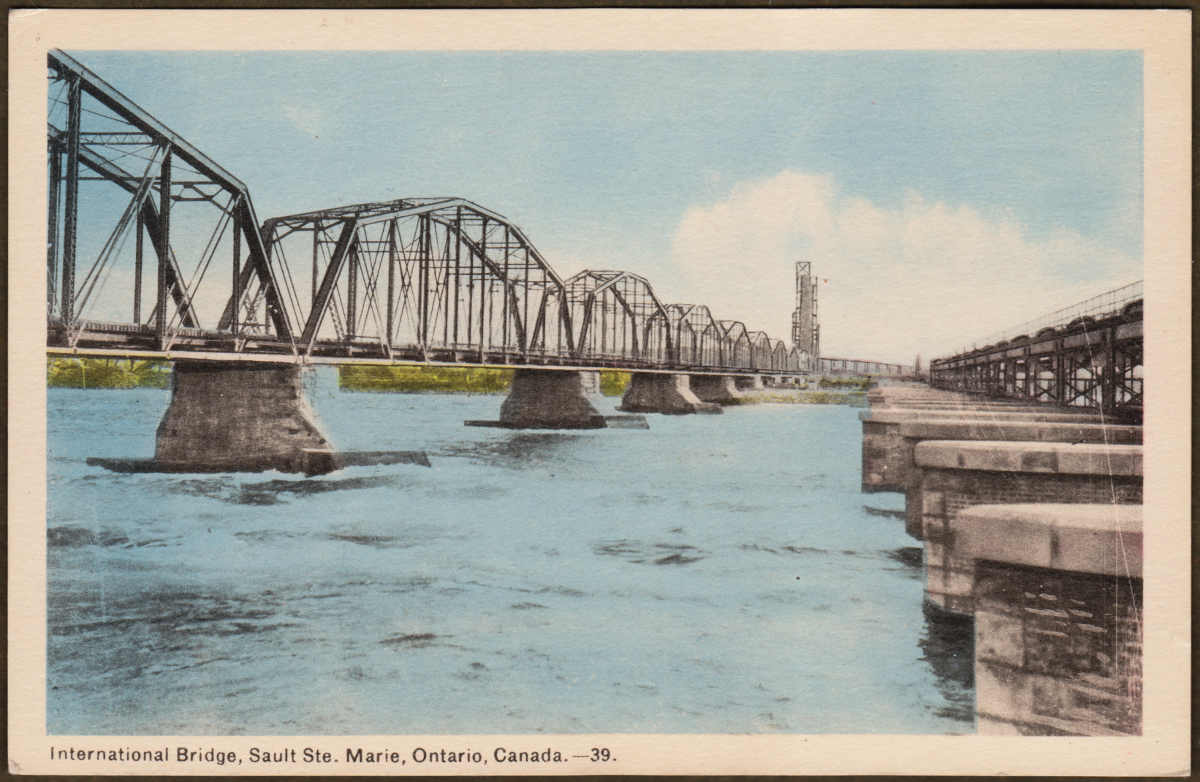 In this case, the compensating dam is to the right and the camera is facing south to the US.
The towering vertical lift span of the railway bridge over the US canals is seen in the distance.

Here is the Sault Ste Marie harbour in 1923
as described in a Canadian government publication.

To the American Side


Finding some helpful information in a Trains article from December 1958 about the Soo Line, I settled on that date as 'the good old days' for this quick exploration of what was going on over in the US - as it pertained to the Sault Ste Marie bridge. The next map below shows the lines which became CPR property.

But how and why did the CPR go after these American lines when it had just gone to great expense to build its line north of Superior?

Some ancient history from the 1880s:


The Duluth, South Shore and Atlantic; the Wisconsin Central; and the Minneapolis, St Paul and Sault Ste Marie became CPR properties in the United States.

The last (eventually known as the 'Soo Line') began its corporate life as a second effort by flour millers in Minneapolis to build their own railroad to prevent 'Chicago railroads' from charging them unfairly - compared to the rates charged to similar enterprises closer to Chicago.

... There were soon five or six railroads serving the Minneapolis area ... and many of them were able to make money from selling real estate from the land grants associated with their charters. The Soo Line received no land grants. So ... the Soo Line came to the area after other lines were established, it didn't have 'free land' with which to supplement its income in the early years. How can this story end well?

Having checked the contemporary biographies of Canada's great railway builders, and older and newish accounts of the CPR's corporate development, I found no clear explanation why the CPR obtained the US lines shown below on the map. There was some speculation about JJ Hill and WC Van Horne and their great visions for their continental systems ... or their playing chess to deny the other any advantage.

This pattern would repeat itself: George Stephen, Donald Smith, JJ Hill et al did very well on their investment in the St Paul & Pacific Railroad (1878) ... later the St Paul, Minneapolis and Manitoba Railroad. This 'Manitoba Road' later became the key overland supply route to Winnipeg for the western construction of the CPR ... The CPR had not yet been built north of Lake Superior. Each investor made millions of dollars. Later, Hill would make this railroad the first section of his western transportation empire - the Great Northern Railway. Eventually the GN was very active in its attempts to siphon off CPR traffic by sending feeder lines north and just across the border.

To make another financial killing, Stephen and Smith quietly bought up the Soo Line early in 1886 and later the DSS&A. Van Horne and Hill had both passed up on these two Soo lines - both railroads needed too much work to get them in shape and they were a low priority as acquisitions. Despite their repeated denials, Hill eventually did find out that his two business partners (Stephen and Smith) were buying these lines for the purpose of selling them to either Hill or the CPR at a profit. Hill started a rate war against the Soo Line. On August 7, 1888, George Stephen resigned as the President of the CPR, immediately after buying the two Soo lines from himself for the CPR. Now the Soo lines were the problem of the CPR's next president - WC Van Horne.

The story goes on and on - it seems Smith and Stephen betrayed President Van Horne's efforts to make himself and the CPR a lemonade with the two Soo lines. Van Horne purchased the Duluth and Winnipeg Railroad in 1893 - which almost formed a stringline from Duluth to Winnipeg through an area rich in iron deposits - the Mesabi Range. It seems Smith and Stephen were still directors of and investors in the 'Manitoba Road', which was becoming Hill's Great Northern. If the CPR lost, they won. Or they lost if the CPR won.

Theoretically, directors have a fiduciary responsibility to their corporation, i.e. NOT to the shareholders. It is hard to see how Stephen and Smith could have acted in the best interest of both the CPR and the Great Northern at the same time.

... CPR Directors Skinner, Stephen, Shaughnessy and Smith effectively conspired and forced Van Horne to sell the D&W to Hill in 1897. This resulted in a great future advantage for Hill's Great Northern at the expense of the CPR and Van Horne. In June of 1899 Van Horne resigned and Shaughnessy became President.

I own CPR annual reports covering the years of Smith's and Van Horne's deaths. I had often wondered why Smith warranted a long laudatory passage but there is no trace of a record of Van Horne's death. It is the victors who write history - including the CPR's corporate history.

The 1958 map below identifies the three discrete corporate identities and their lines.

After building lines for 30 years, the Soo Line was finally complete - according to the article. In spite of the loss of the Duluth and Winnipeg, Van Horne's connection to Portal, ND, and on to Moose Jaw, SK, provided the CPR with the enduring advantage of a shorter route from Chicago to the Pacific coast.

The Trains article of 1958 states that the Soo Line's key freight was grain and flour. Cooperative moving of iron ore from the Cuyuna Range over joint trackage with the Great Northern was a lucrative source of income - this is somewhat ironic, considering the history. Lignite, lumber, pulp and paper were other commodities hauled.

None of the 1958 freight was captive to the Soo Line - except for that associated with the area of Michigan approaching Sault Ste Marie.

... The rest of the Soo Line's freight could be taken away by other railroads, by lakers on the Great Lakes, by barges down the Mississippi or by trucks. The Soo President at the time saw no future in the passenger business in the region due to the popularity of automobiles.


The Wisconsin Central built its first major line in 1877 from Menasha (near Neenah on the map) to Ashland. It reached Chicago in 1886. The WC came under Soo Line control in 1909. Like the Soo Line, the WC was a latecomer railroad to the area. Unlike the Soo Line, the WC had a million acre land grant. Under CPR control, the WC maintained its separate corporate identity, offices and accounts. After WC's bankruptcy in 1932, the Soo Line became its operating agent, with its crews running WC trains.

Here are records from CPR annual reports which show
some US subsidiary changes over the years. From the 1951 CPR Annual Report 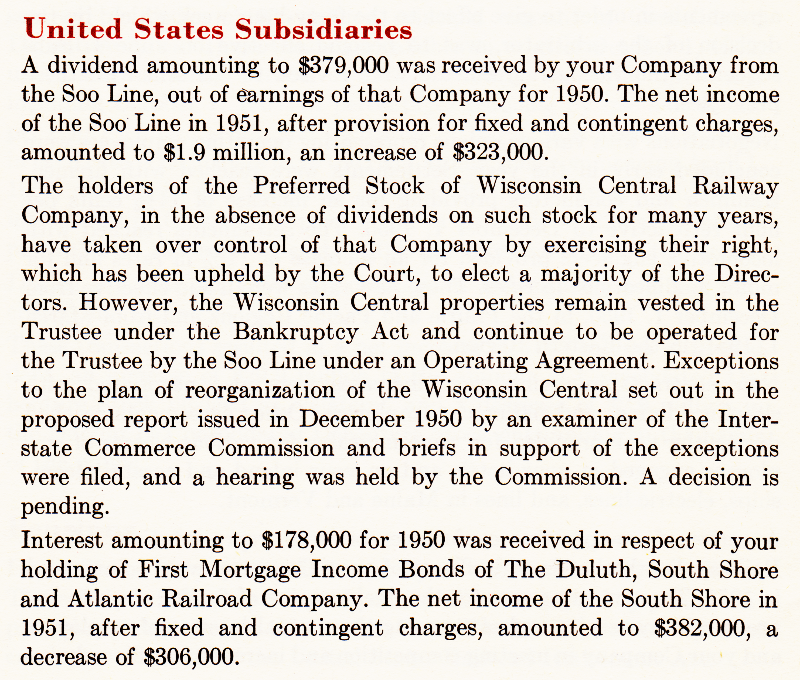 From the CPR 1958 Annual Report

I include all of the other companies because they are interesting to think about.

Notice that one of the controlled companies is the Sault Ste Marie Bridge Company.

... an excellent reference for the industrial and rail history of the greater Algoma region...

From the CPR 1961 Annual Report 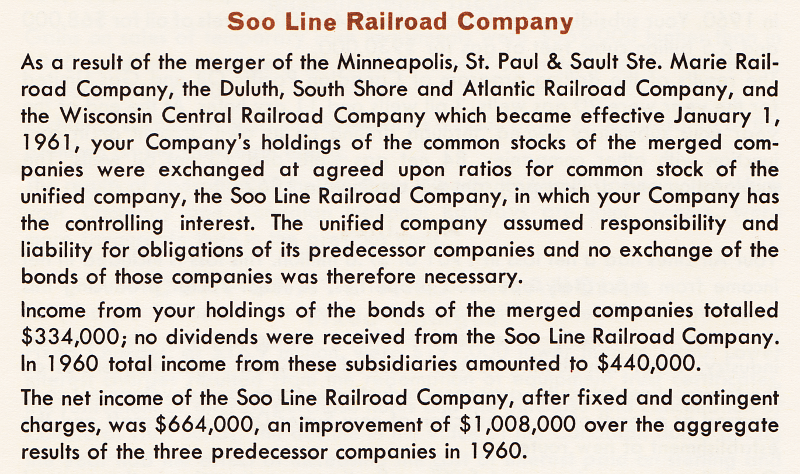 The list of controlled companies follows again, and notice the the Sault Ste Marie Bridge Company continues as a separate company. 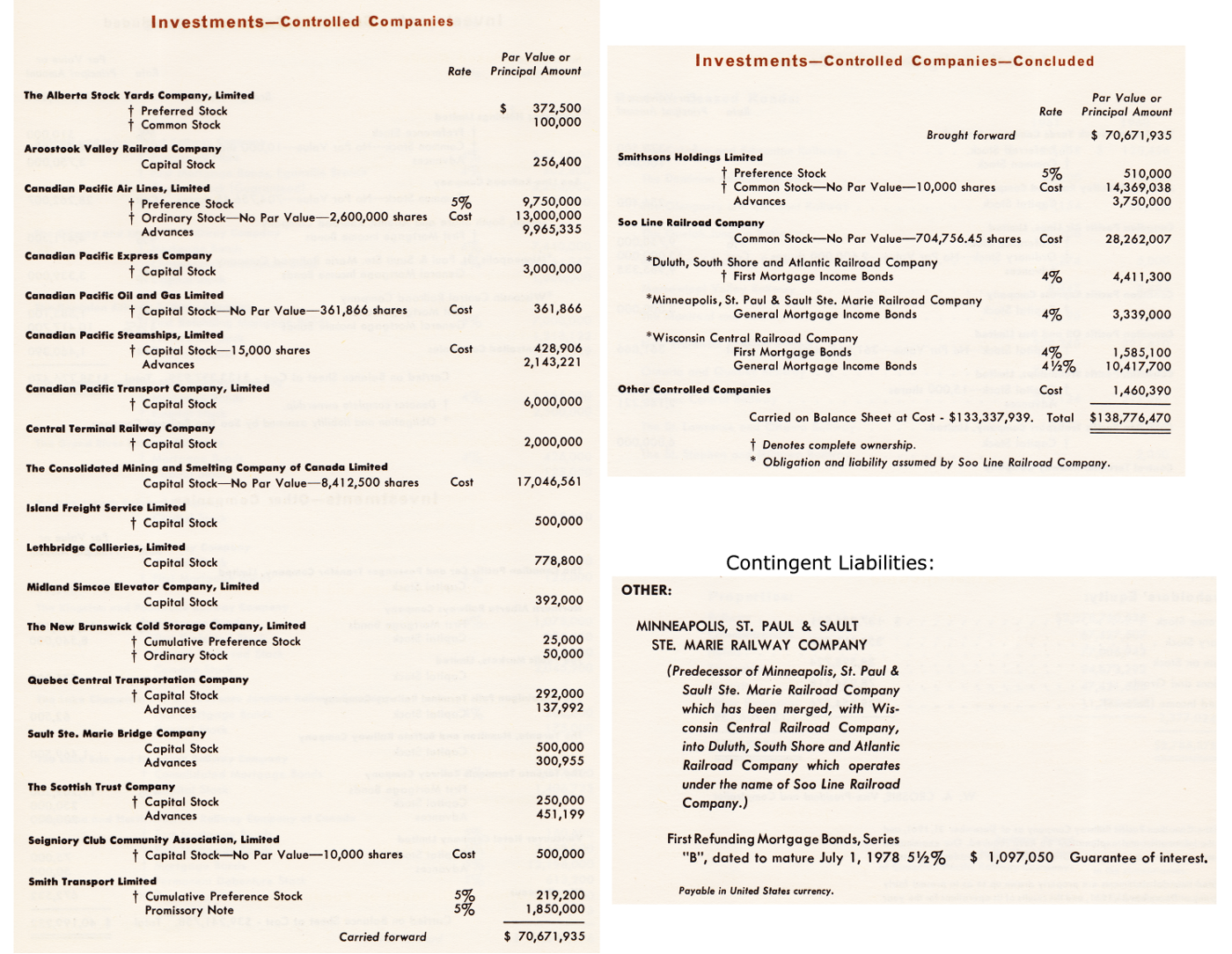 
The Trains article author wrote that the Soo received a greater benefit from dieselization in 1955 than most of its neighbouring roads because most of its steam power was quite old and quite light.