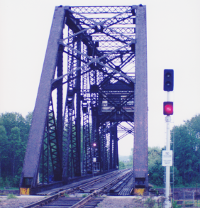 This week I was explaining to someone how frequently my spouse and I had travelled through Sault Ste Marie on our way to Schreiber and Portage la Prairie. Often, we only made overnight stops there, giving me limited time to photograph local railway activities.

However, one summer we slowed things down a little and we had a better opportunity to observe and to document the Canadian side of the railway bridge - 'The International Bridge' (1888) - over the St Mary's River.

While my photos are usually sized to efficiently use the available width of the blogging screen, this post is a little different. I have dumped 'full size' photos into the blogging software to get the best available resolution of some of the bridge's details. The photos will be dreadfully slow to load for some readers.

Many people have never been to Sault Ste Marie!

Before the arrival of railways and the railway bridge ... Sault Ste Marie would have been like any other Canadian outpost which was accessible only by water transportation. It would have been an isolated, snowbound village all winter.


From a favourite old atlas comes the railway map (above) from circa 1900. Looking out the side windows of a passenger car, the CPR line from Sudbury to Rat Portage was/is rather monochromatic Canadian wilderness, except for the spectacular scenery along Lake Superior.

There would have been much more farmland, general evidence of humans, and industry to see out the windows had the line been built via St Paul to Winnipeg. As a railway makes money from hauling things, this route would have made economic sense.

The Sault Ste Marie Railway and Bridge Company obtained a charter in 1871. This was associated with the Northern Railway of Canada ... and possibly Sir Hugh Allan - of Pacific Scandal fame. Guess what happened to that bridge idea.


Above is a CPR passenger train timetable from 1945. If you look at the column at the left, you can see that people did eventually travel from Sudbury through to St Paul.


Here is an early reference to Sault Ste Marie - back when the most significant 'transportation infrastructure' there was the American canal system between Lake Superior and Lakes Huron and Michigan.

Sandford Fleming had been offered the job of chief engineer for the proposed government-built Canada Pacific railway to British Columbia. The account of his first 1872 expedition to consider a route for the railway via the Yellowhead Pass became Ocean to Ocean - a book written by the Rev George Grant.

The party travelled by rail to Collingwood, Ontario, then by steamer to the lakehead. Regarding "the entrance to our North-west" (below), author Grant is referring to the Chicora Incident of May 1870. Note that he refers to creating a canal on the "British side".

A post about the Chicora Incident and the Red River Rebellion. 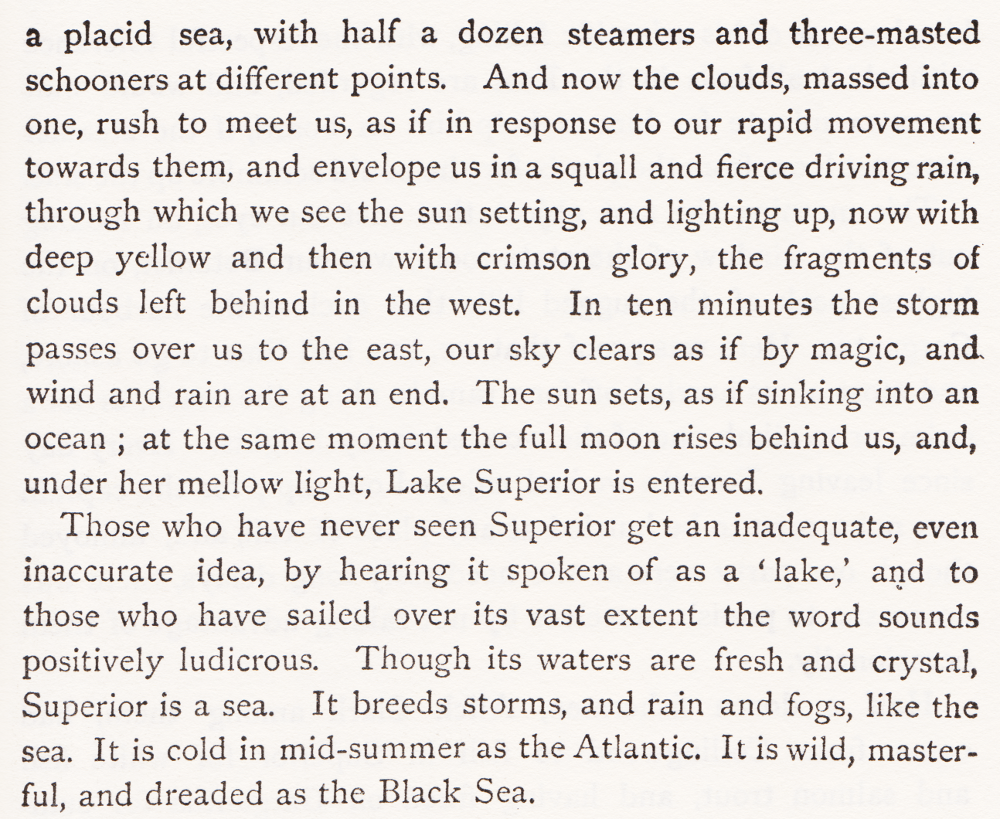 
While Sandford Fleming and George Grant probably didn't use this Ontario Motor League Trip Tik, it does show the islands described in the text and the location of the ferry in the late 1950s. The ferry provided international pedestrian and automobile transportation before the completion of the the Sault Ste Marie International Bridge (1962).

The completion of the Trans-Canada Highway as far as Marathon (1960) and the building of the US Interstate system brought increased traffic loads to the Sault Ste Marie ferry.

The year before the highway bridge opened, the ferry operation carried about 78,000 vehicles in a five month period. Up to three boats were used to provide this service. At the worst times, the automobile queue for the ferry blocked downtown streets and the wait time was as long as four to six hours.

In the undated postcard, above, the Canadian side (roughly north) is to the right. Sault Ste Marie, Michigan is to the left. Notice the cofferdam where work is being performed on the US lock to the left.

The soaring spans of the highway bridge can be seen, with the railway bridge tucked behind it on the Lake Superior side. The gated remains of the tamed sault (rapids) can be seen in the centre.

The CPR yard is to the right. The tracks leave the right end of the yard and loop behind the road bridge to cross to the US. The railway bridge photos will be coming from the section to the right of the rapids shown above - the Canadian side.

I am not certain, but the ferry route (if it was still operating in this photo) may be behind the white fuel storage tanks.

The map above comes from a pamphlet printed for the benefit of recreational boaters
travelling through the Canadian canal (number 6).

Jim Christie found a number of articles from circa 1900 about the Sault Ste Marie bridge and that led to this post of my old bridge photos. Coming from one of his articles is this excellent map of all the features on the Canadian side near the bridge. 'Swing Bridge' marks the location.

Links to the articles found by Jim Christie are listed at the end of this post.

Another post will look at our earlier visits to Sault Ste Marie. 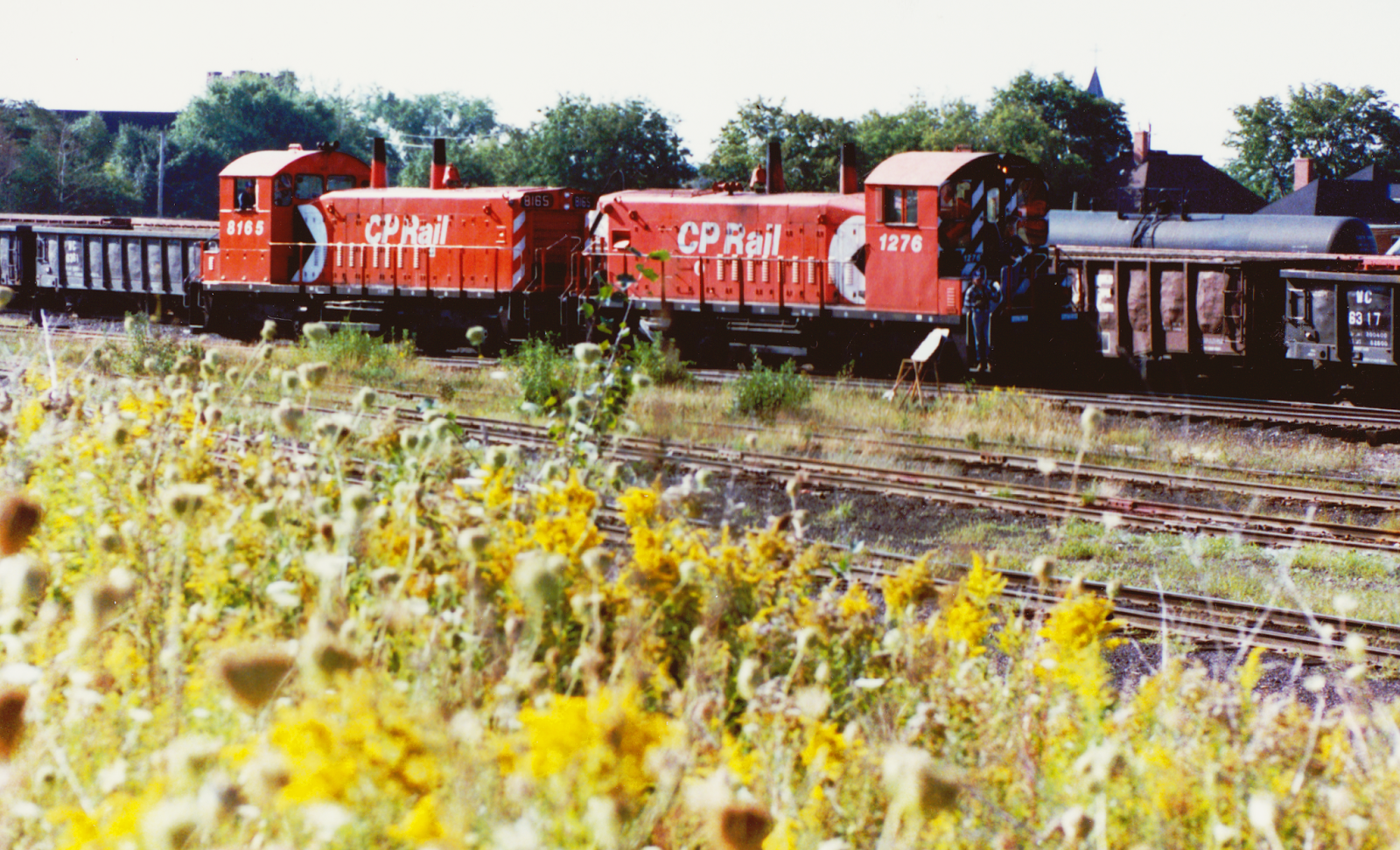 This was the standard power for international transfers at the time.
I probably crouched to get some interesting foreground material,
but it ended up looking like the 'Trainmaster Cam'. Like the previous image, this is at the CPR yard. Part of the harbour tour showing some of the Algoma Steel docks.
The US-based harbour tours boat can be seen in the distance. Part of our tour of the locks on the US side - along with the US tour boat.
This view looks downstream and there are three lake ships in the photo.
As you can see, the two bascule sections of the railway bridge are up.

Two Wisconsin Central units are beginning their transfer from the CPR yard.
This power clanked more heavily as it crossed. With Canada behind the camera, we are on another lock tour,
you can see a raised bascule section and the newer US vertical lift span.

Yet again, shooting into the sun at the CPR yard. Another year, another view of the Algoma Steel docks and furnaces.

With the lock gates pointing upstream ... here on the Canadian side,
this map has 'south' at the top and shows preserved and historical features.

The railway bridge is half-swung - off at the right edge.
Notice Number 9, the emergency swing dam.

Three prints are joined for this view.
I haven't checked the negatives to see if the gap was my fault
or if photofinishing centring creating the gap.

In 2017, the Google view of this is obstructed by the now-mature trees. The primered hardware in the foreground is the Emergency Swing Dam.
It resembles a swing bridge, but has 23 wickets on one end which can be swung over
and lowered into the canal in an emergency.
The wickets are then gradually closed off by 23 steel shutters.
( ... I had to leave some photos out for another time.)

Another fine Dominion Bridge Product, it was built in 1896 and used in 1909.
In 1909, a ship hit the lower gates of the Canadian lock while another ship was entering
the upper gates. The lower gates gave way, taking both ships with them.

Lake Superior then began emptying through the canal
until the emergency dam was in place and working within 24 hours.
It took two weeks to repair the extensive damage. 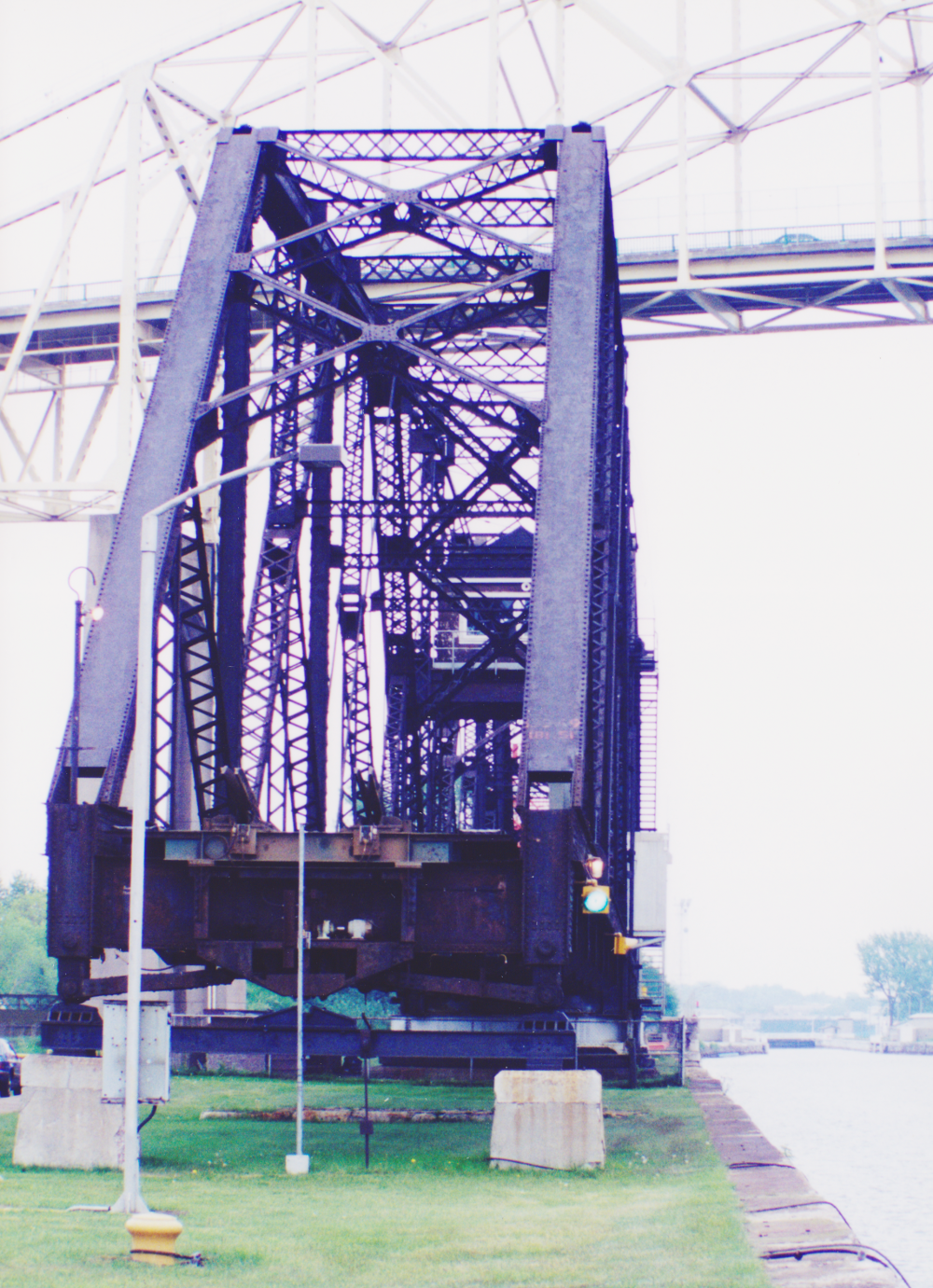 Looking downstream, the swing bridge is clear of the canal to the right. 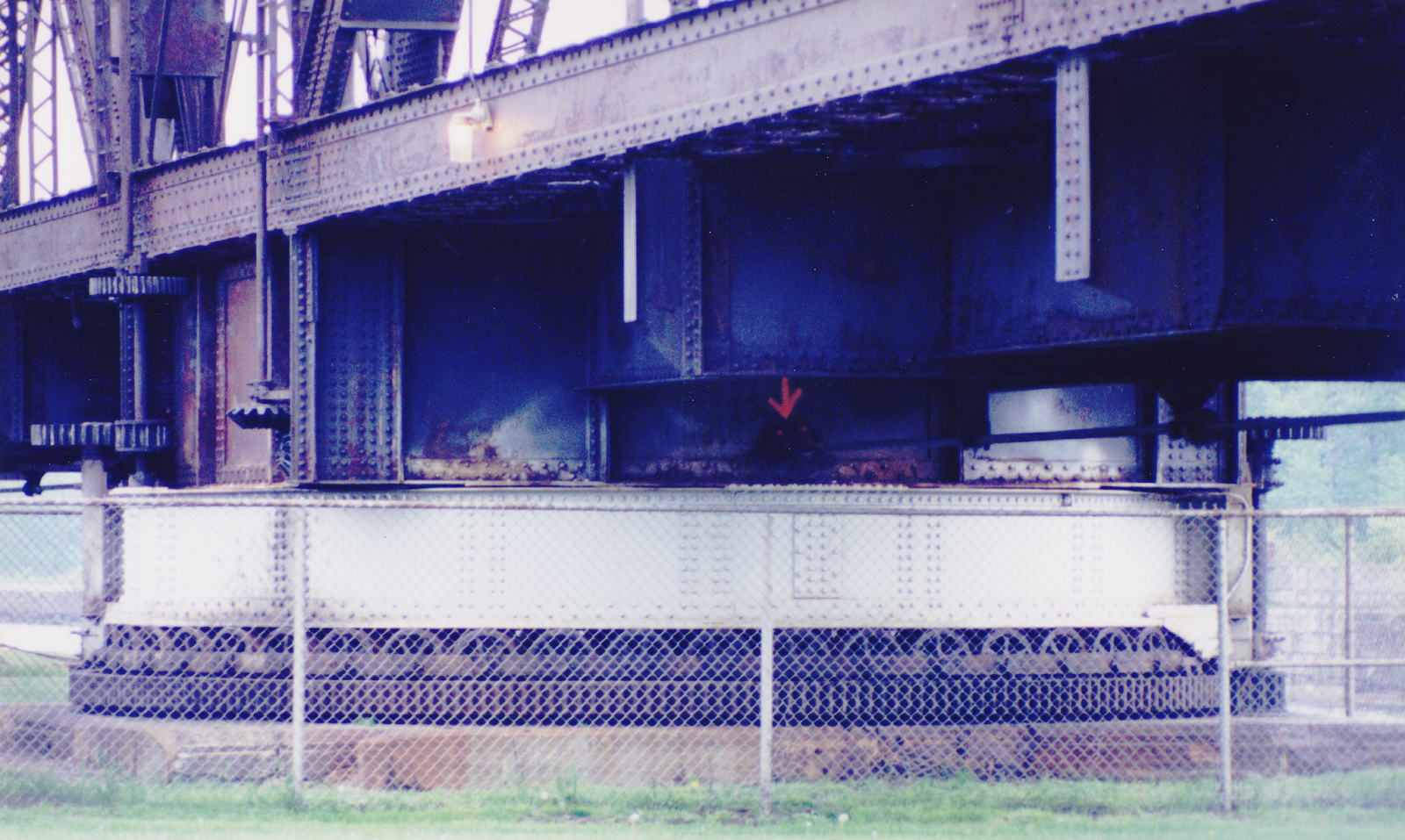 Some detail of the bridge's various gear systems.
Notice the centipede-like series of wheels at its base (behind the fence).
The orange arrow may indicate an area of corrosion. Sorry about the big square head in the photo.
The end of the bridge is resting on those two pads.
In the centre, you can see a motor used to lower a central locking pin.
I had a close look at the white paint and it may read 'Painted May 61'. 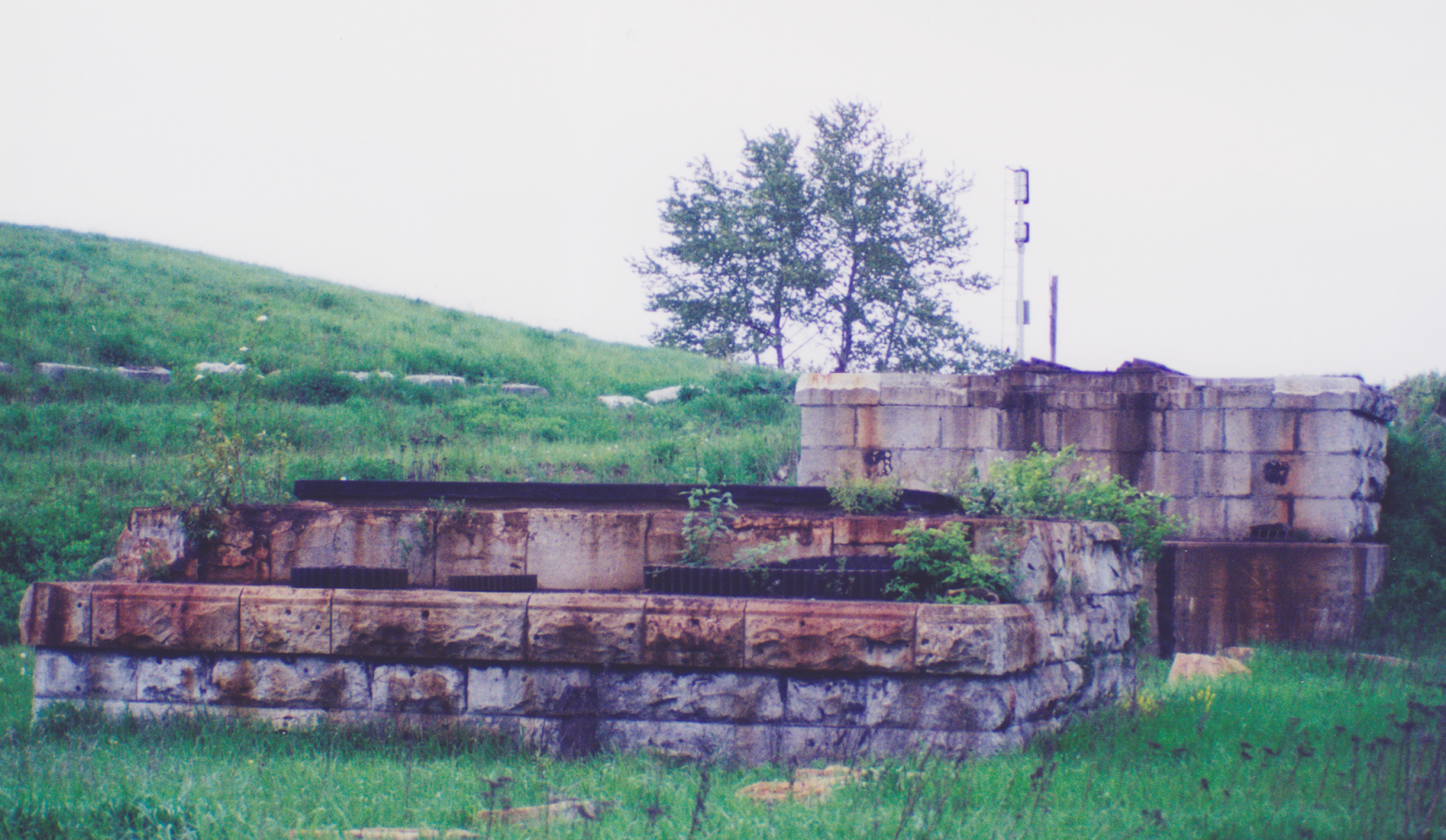 Here is the northern abutment for the closed bridge.
It is not clear to me how the rail segments in the previous two images lock.

Below, in failing light, this is what the rails look like when the bridge is closed,
as seen looking south from the abutment ...

Looking upstream: It is getting quite dark and the bridge is closing. Looking over the Canadian lock wall toward the US and slightly downstream:
The bascule sections have also closed.

Notice that one of the many static spans over the rapids
and hydro-electric plant canals is shown in this photo.

The vertical lift span, however, is still up.
A train may be coming in 15 minutes,
or it may be through around midnight. 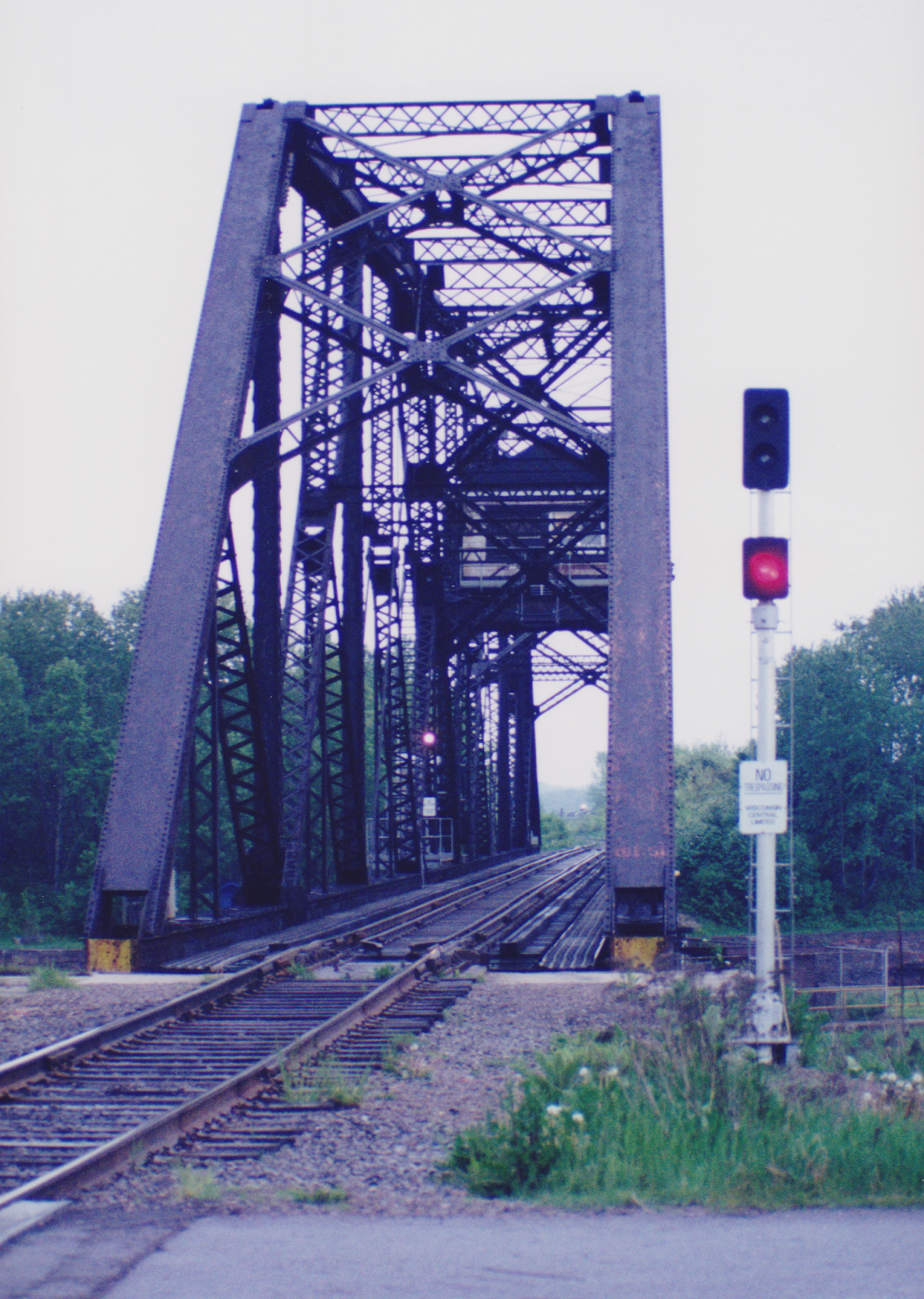 The swing bridge is locked and the bridgetender is on duty. One last photo before we return to the hotel ... 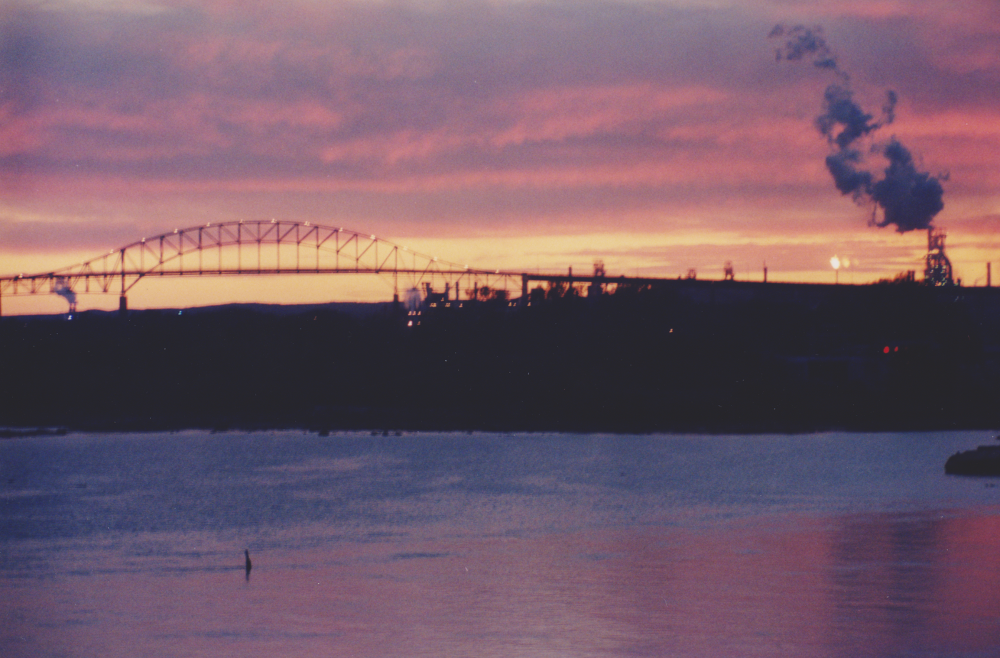 Sunset as seen from the hotel.
Still no train.


Links to articles found by Jim Christie about this bridge.