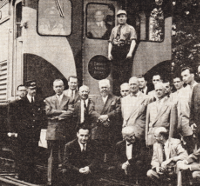 This last part of the current Budd RDC series
surveys a set of Dayliners from La Tour Joyeuse!

We also look at some of the CNR's Budd activities,
and early schedules for RDC's on both railways.

A table summarizes Budd RDC ownership
by the two major Canadian railways -
to provide an idea of the importance of this technology.

An idealized tableau of a Budd car in service.

On one of my first 'intercity' rail trips: Montreal West to Lachute,
I was similarly hoisted aboard by my father,
as he shouted to my mother: 'Can you manage?' over the noise of the bus motors.

... In lieu of any CPR help with the valise, she was lugging it. 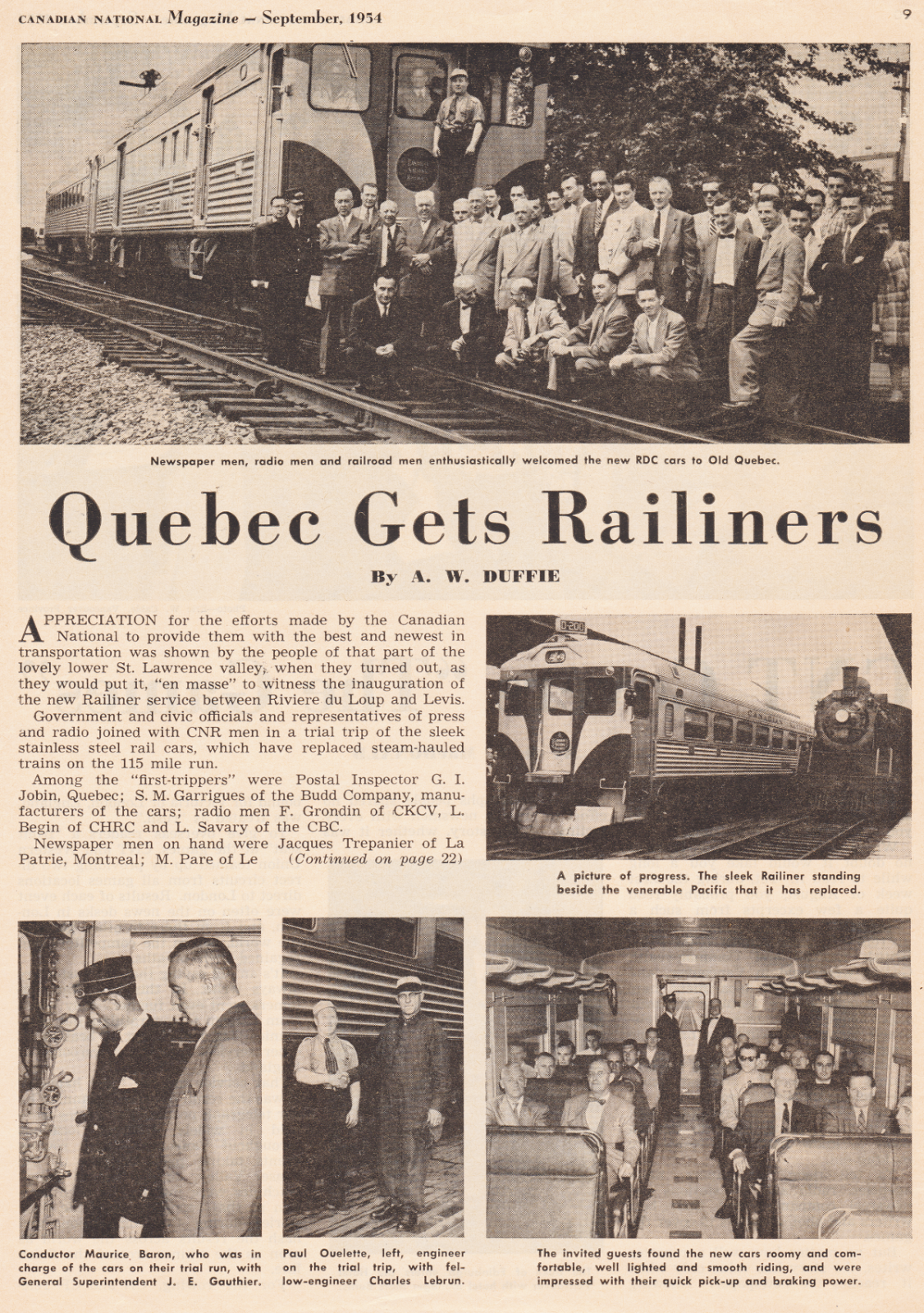 ... The balance of the article was not saved.
A couple of the photos are enlarged/enhanced below.

Once again, these are all items archived by my father
back when steam locomotives were still to be found in service. 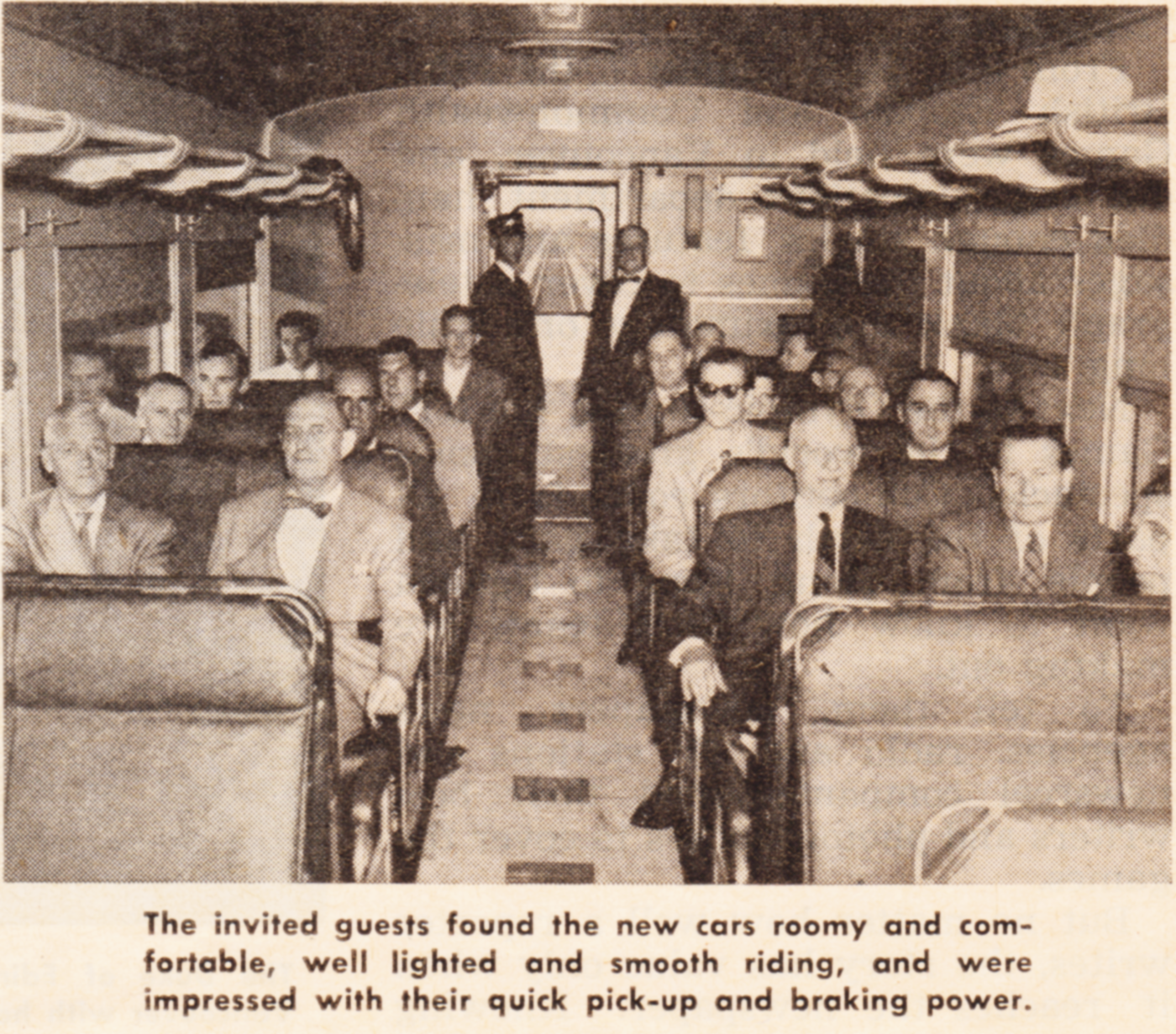 An undated newspaper ad.
The non-stop driving time in 2017 is calculated at around 2 hours,
and this includes long stretches of Autoroute driving (source: Google). 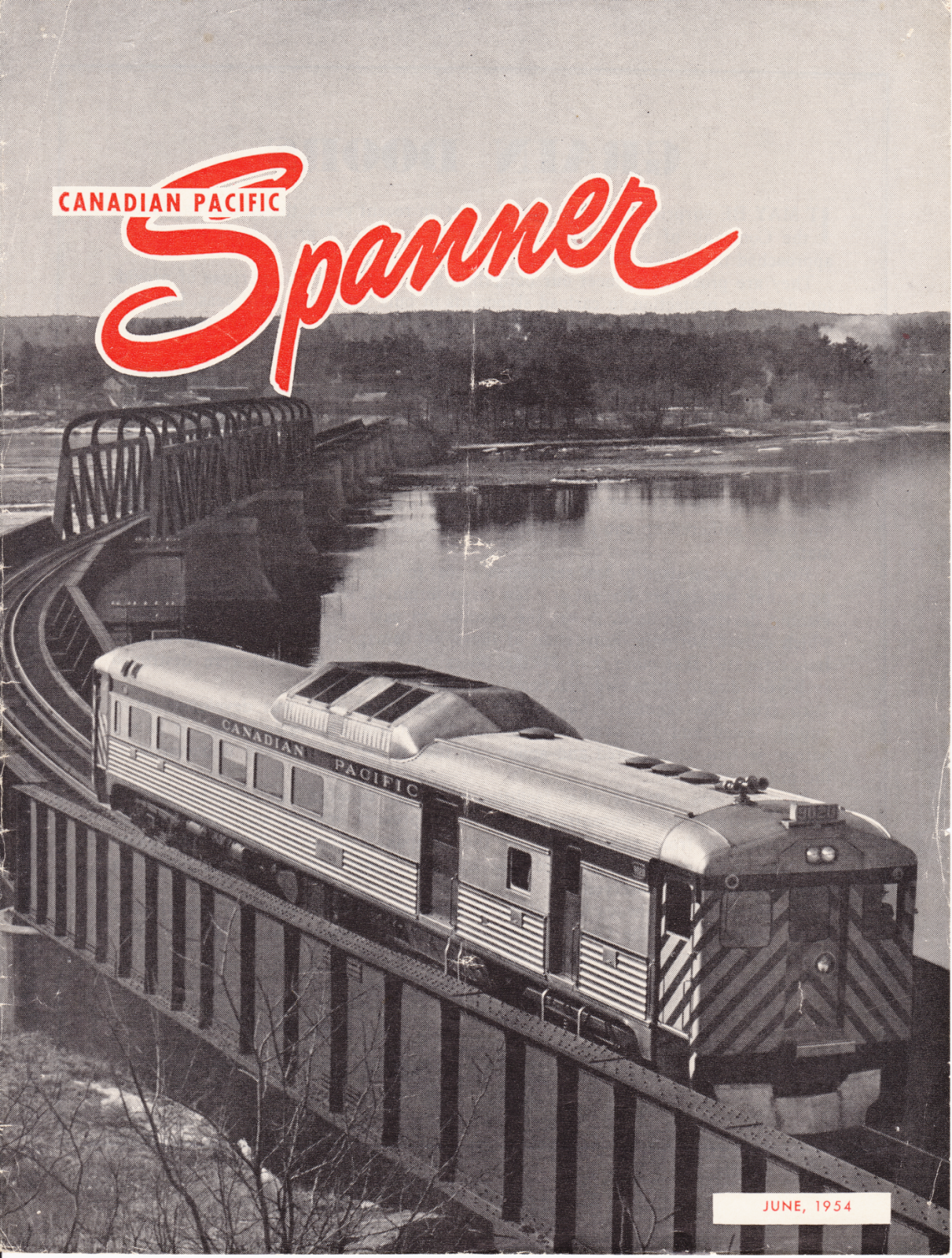 There is no caption describing this cover image, but the identical image appears in the 1955 Canada Handbook with this caption:

"A self-propelled diesel powered day-liner carries passengers, express and mail from Mattawa, Ont., 100 miles north to Angliers, Que. Passenger day-liners are in service between other centres." 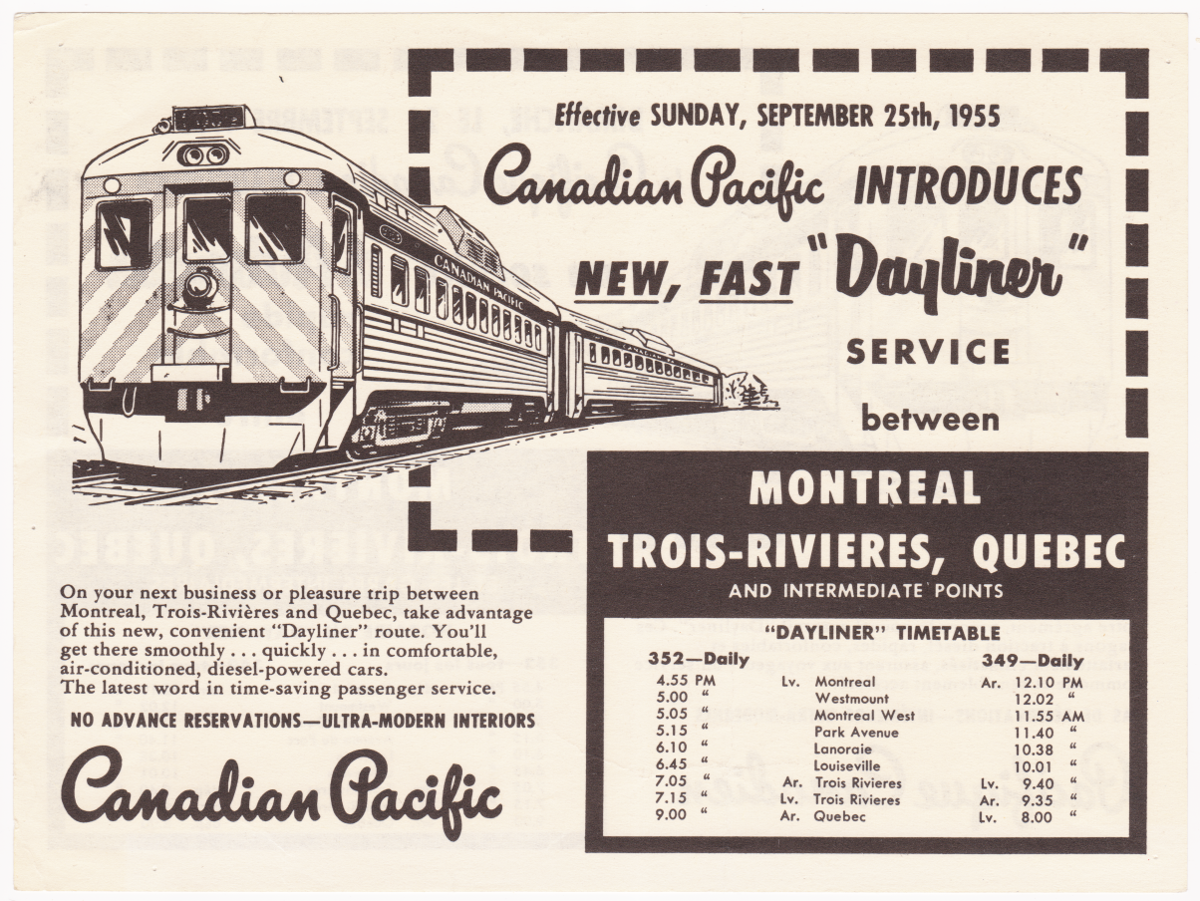 This shows both sides of a Dayliner flyer picked up by my father.

In 2017, the non-stop north shore driving time,
Montreal to Quebec City via the Autoroute Felix Leclerc
is calculated at about 3 hours. 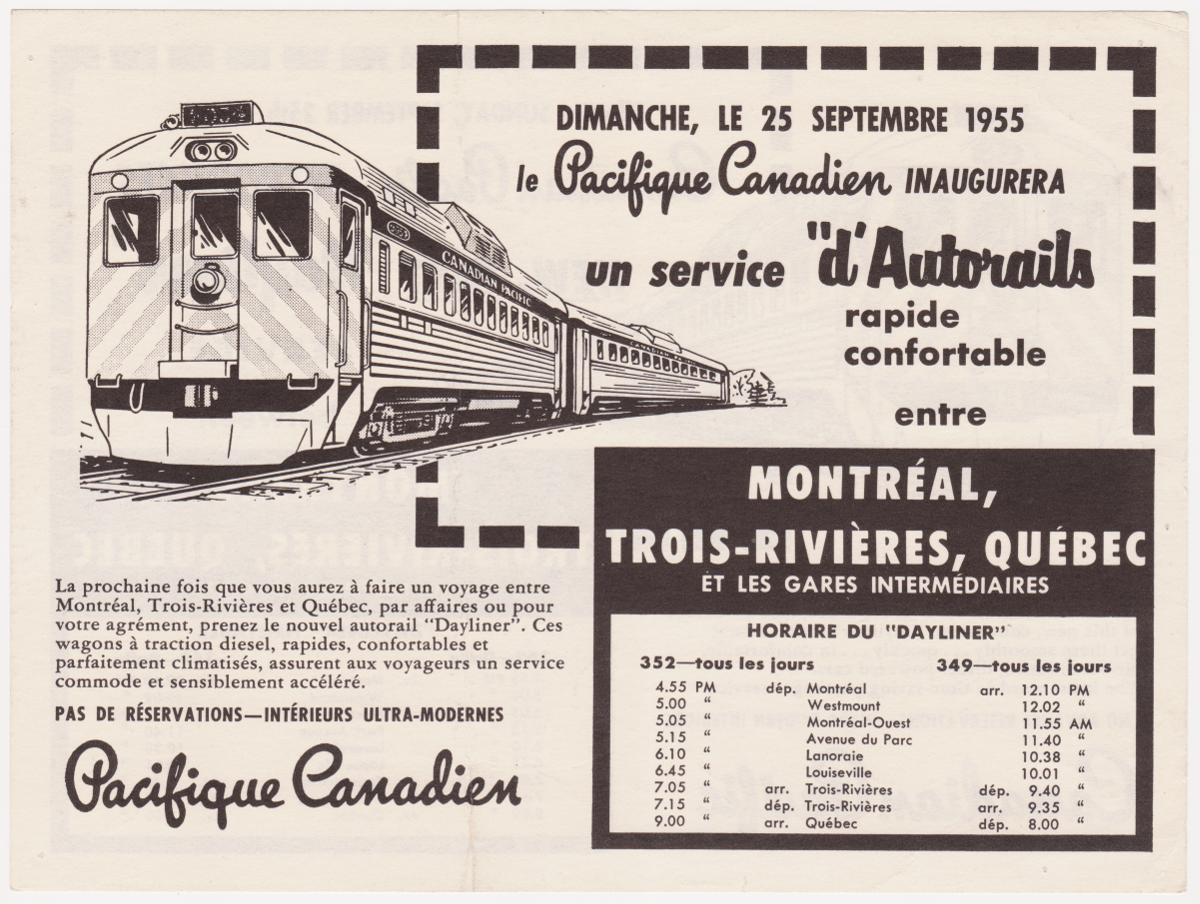 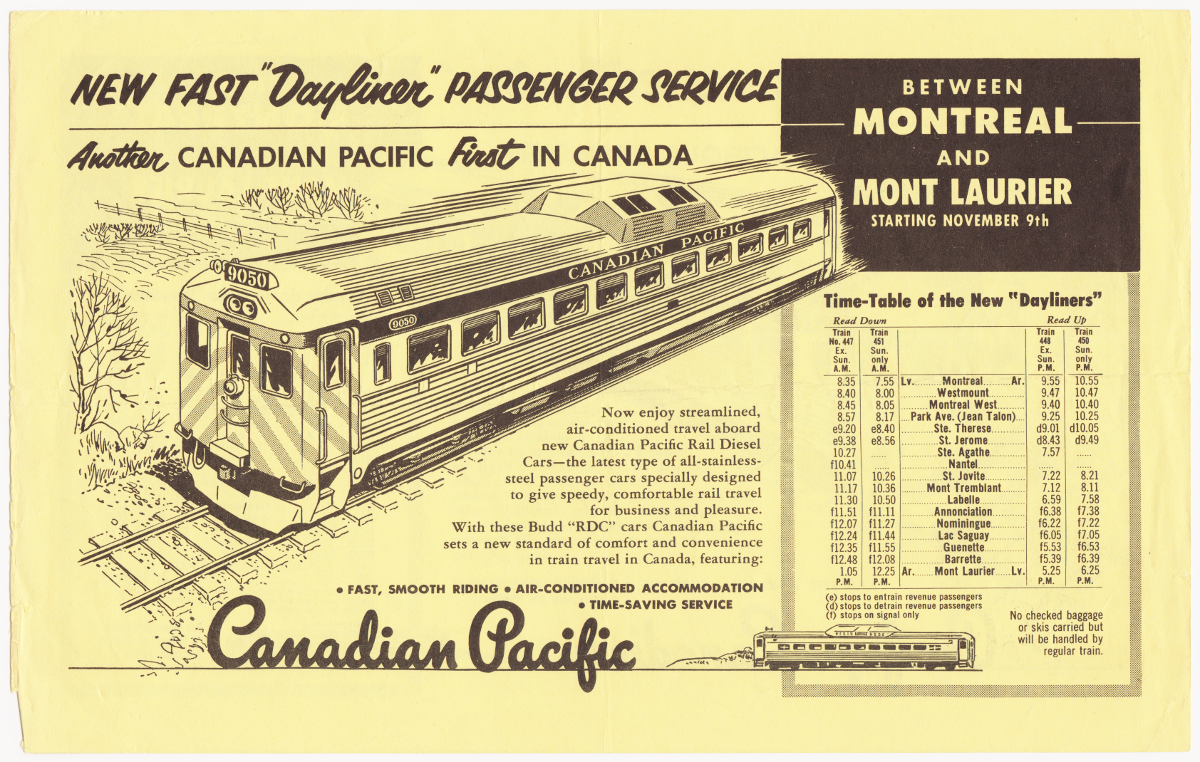 Here is another flyer which my father preserved.

In 2017, the non-stop driving distance from Windsor Station to Mont Laurier
is calculated at about 3 hours.

In 2017, Felix Leclerc could drive to Sainte Adèle in style on an Autoroute!
However, were he driving - instead of taking Le train du Nord ...
his hands wouldn't be free to strum his guitar. 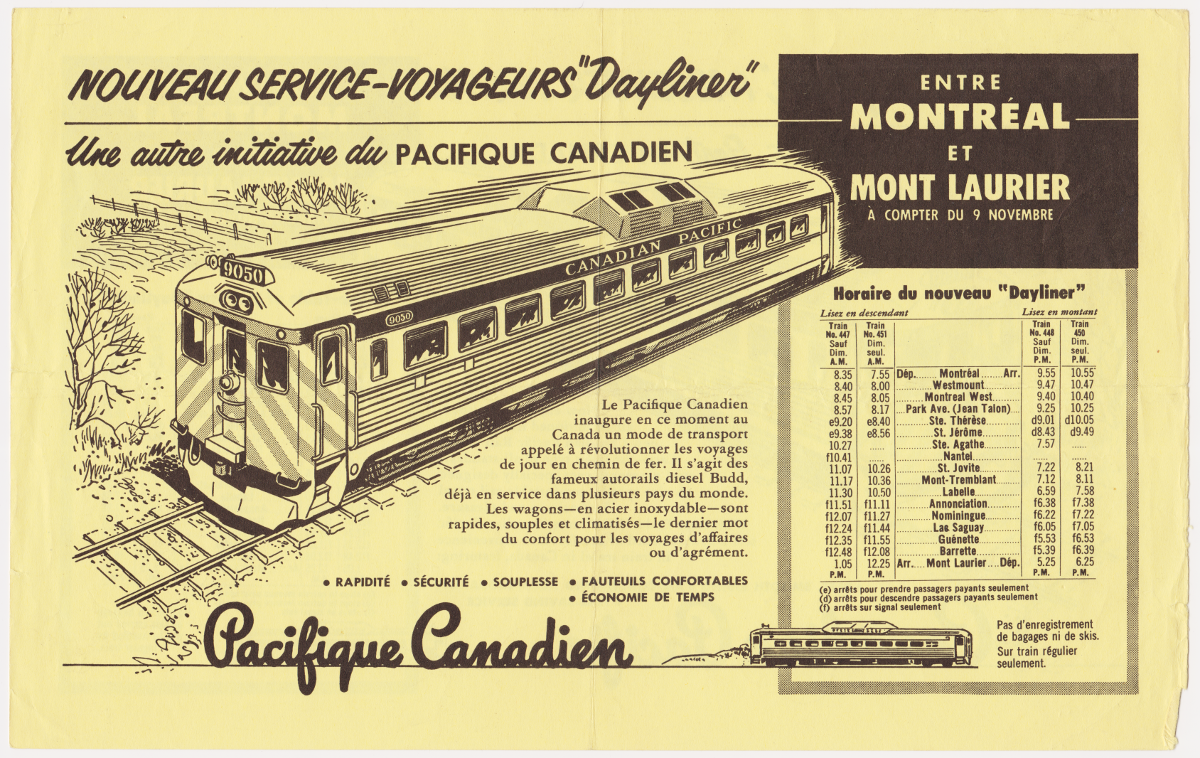 How important were Budd Rail Diesel Cars to Canadian railways?


Here are the RDC's retained by the railways and subsequently owned by VIA as recorded in the 1982 Trackside Guide. I have cobbled together the listings into a single image which may be conveniently printed, folded up and kept handy in your wallet or purse. Win every argument with your friends and family about Budd cars!


The complete listing of CPR RDC's is included below ...
even though entire model 'classes' had been sold to VIA.
I have omitted the British Columbia Railway listing: 8 cars, 6 remaining in 1982. From La Tour Joyeuse my father photographed a three-car Dayliner consist just south of Lac Saguay station as it continued its run to Montreal. The parallel road was once the 'highway' to Mont Laurier. 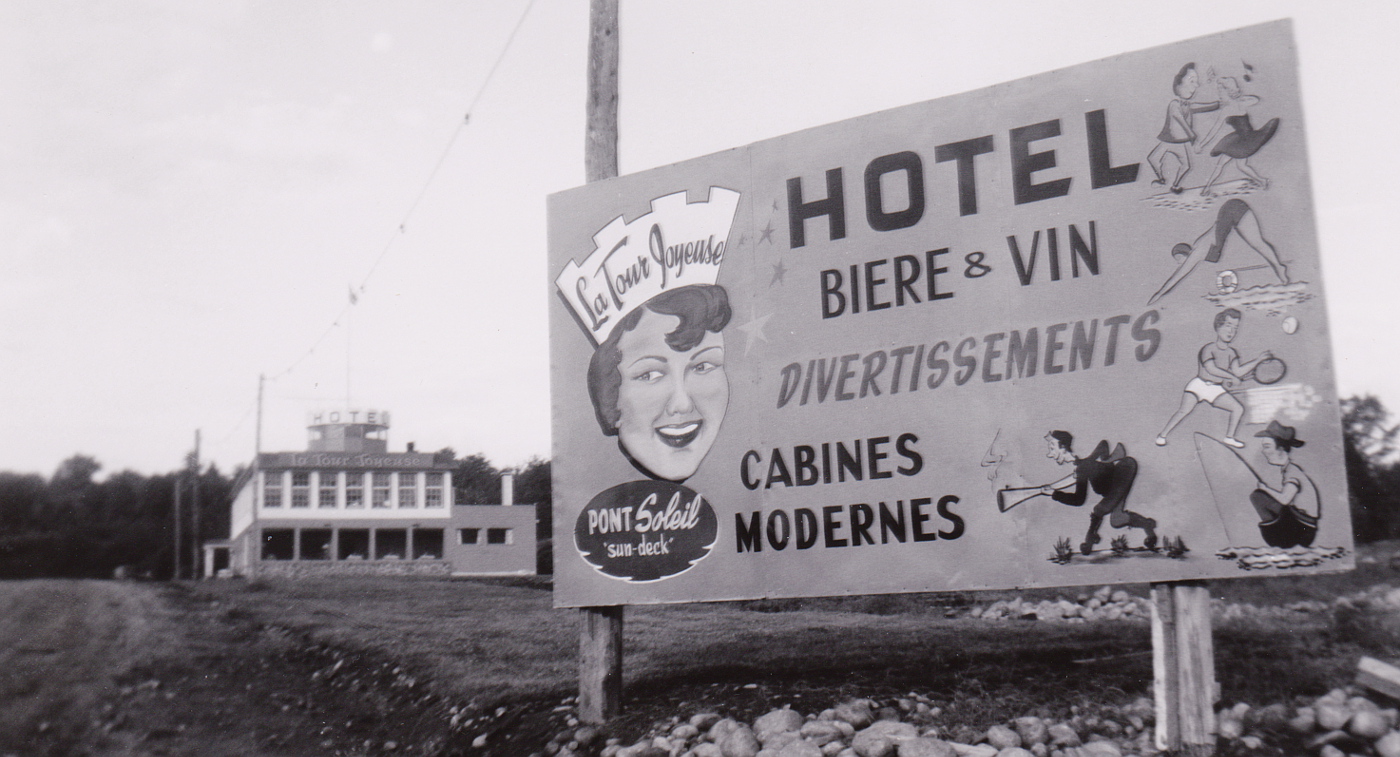 Seen from the new paved highway to Mont Laurier is La Tour Joyeuse and its roadside advertising. Beyond the hotel are the CPR tracks. Behind the camera is the vista of the lake, hills and mountain which the tower was designed to view.


My father's notes indicate that this was "Adhémar Raynault's hotel near the CPR tracks and the old unpaved road to Mont Laurier". Raynault (1891-1984) had been Mayor of Montreal during three periods in the 1930s and 1940s. He filled in as mayor during the wartime internment of Camillien Houde, CBE OStJ.