The Central Vermont Railway in the 1950s 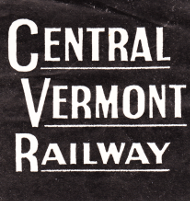 In addition to his journeys on the Delaware and Hudson to New York,
my father also visited a cousin using the Central Vermont Railway.

Here is the 1953 timetable used on the trip my father took
to visit cousin Gerald MacAdam in Greenfield, Massachusetts.
(extra detail for family looking in) My father took the following photos at Greenfield, Massachusetts. 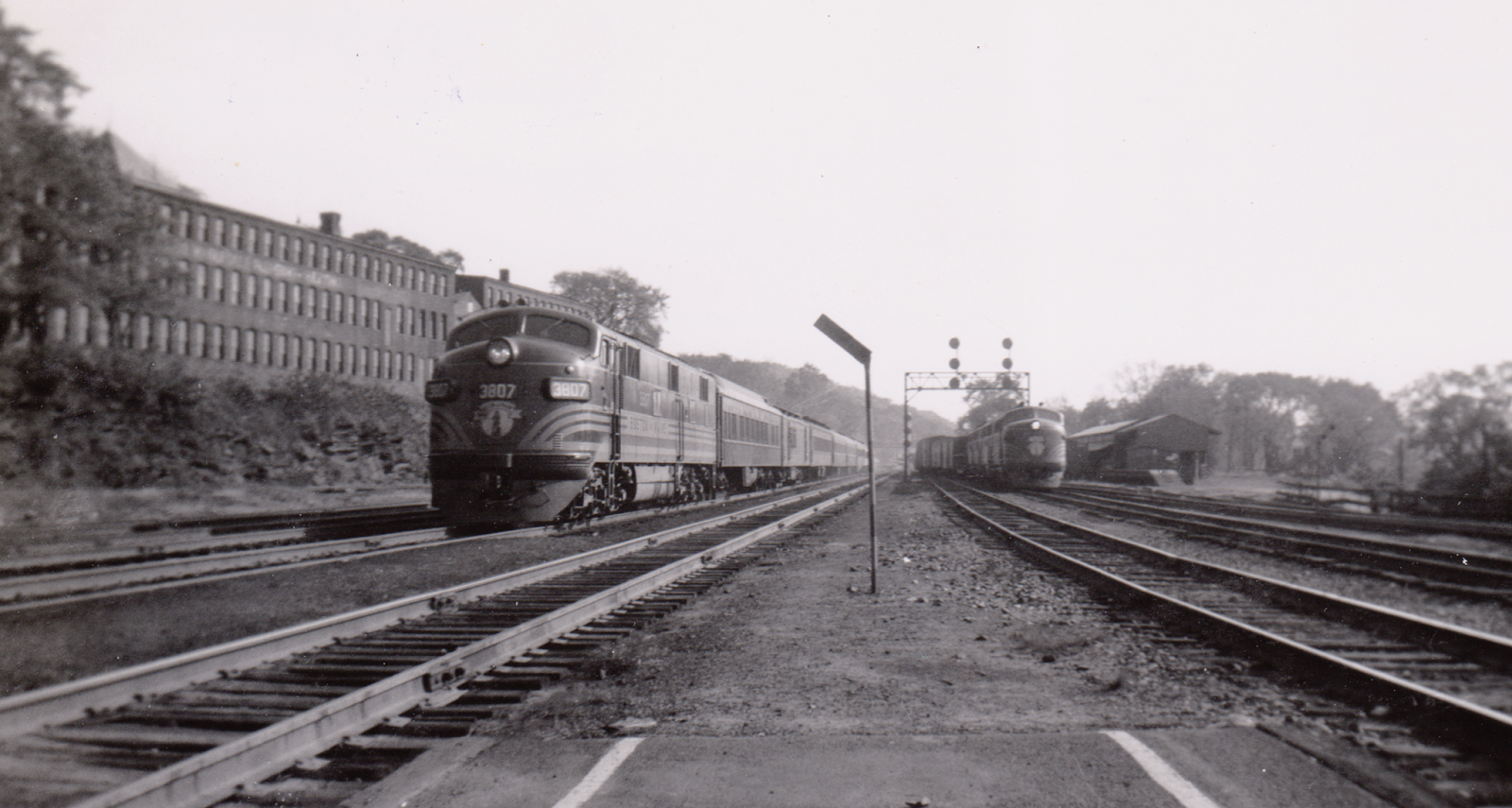 "Northbound Montreal train. Train given to Central Vermont at White River Jct.
B&M 3807 (EMD 1946)
B&M 4200 class engines are pulling a through freight westbound at the right." 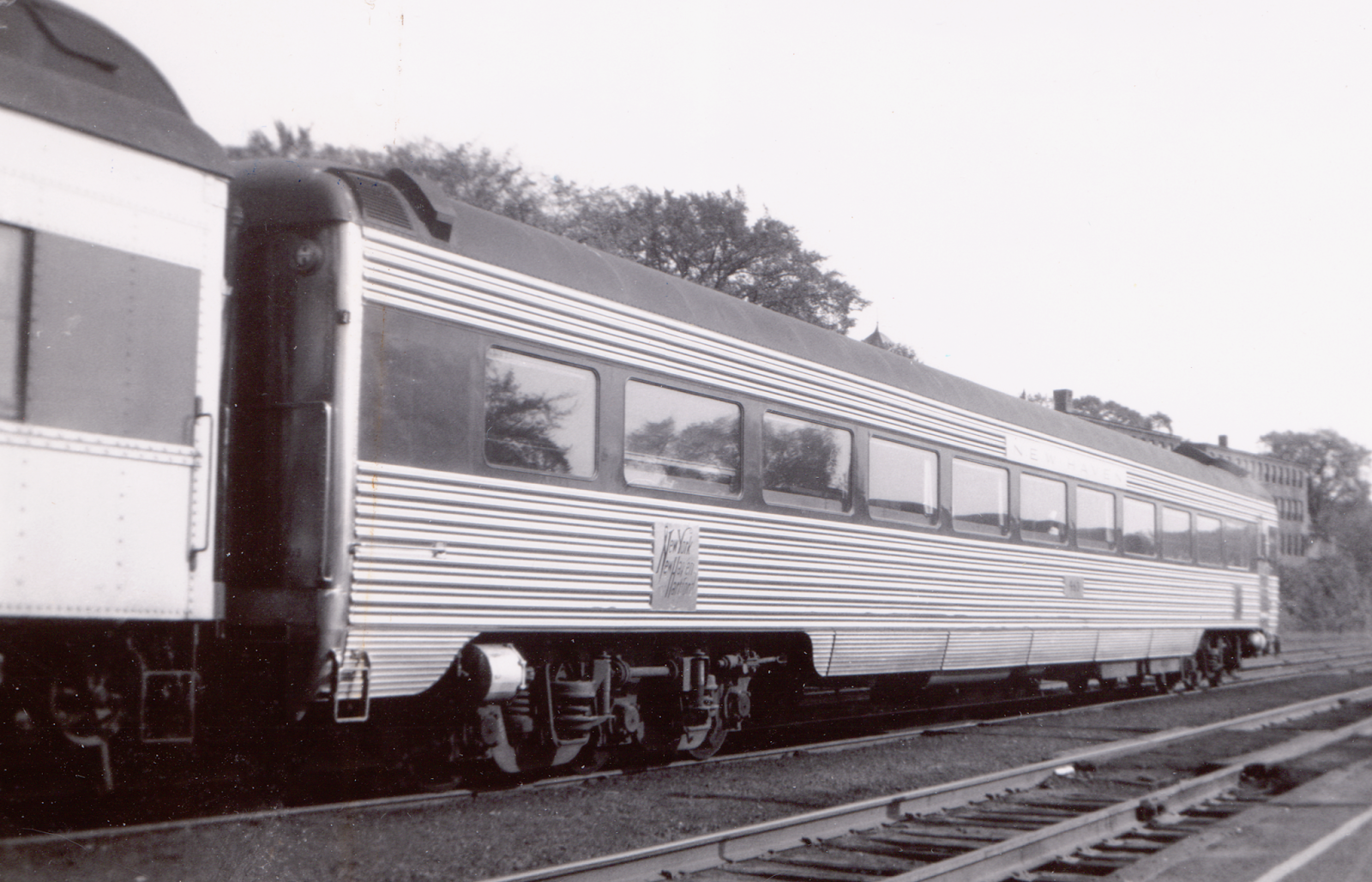 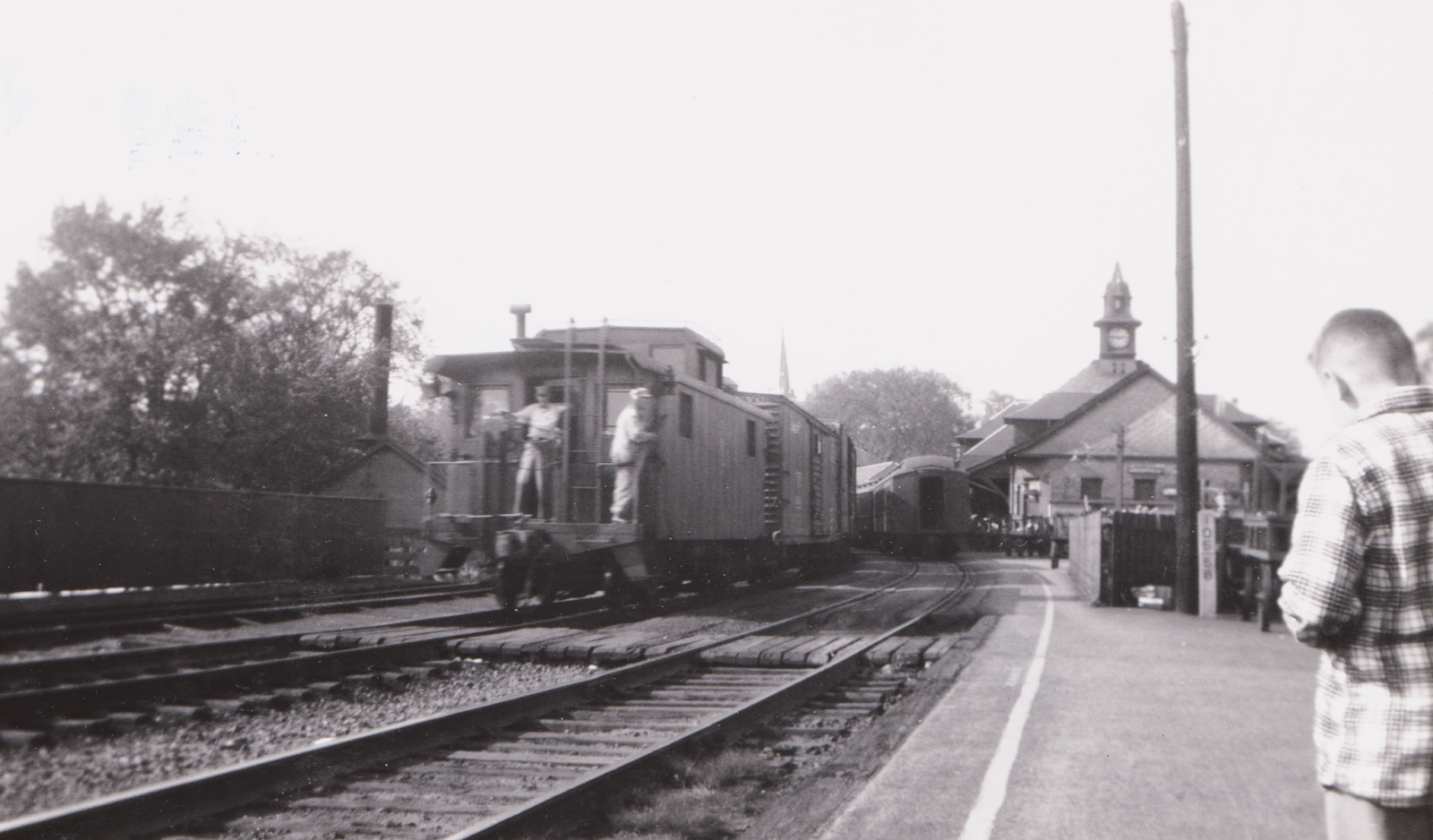 "Caboose of westbound freight.
(Greenfield is a junction)
Bobby MacAdam is at right."

St Albans and Essex Junction in 1966


In May 1966, my father took along the other four members of the family on a CRHA steam fantrip pulled by CNR 6218 to Essex Junction, Vermont. My mother did not usually come along on these trips. In another photo, she is seen with our small battery-powered reel-to-reel recorder on her lap ... as I hold the microphone out the window.

The CVR map, above, is cropped and enlarged below to show the extent our trip.

As my mother might tell you, these trips seemed longer than they actually were. With the train leaving Central Station in Montreal, there was usually a stop - outbound and on the return trip - to change power outside the downtown area or beyond the Mount Royal tunnel-Central Station zone. In this case our coal burner was coupled on at Bridge Street.

Then ... there were numerous runpasts, stops to have local fire departments replenish the water supply in the tender, and often a coaling stop which would employ a crane with a bucket attachment. The train would be wyed for the journey home.

Compared to the normal romps to Victoriaville or Garneau, this one felt like a trip into the Deep South as customs and immigration queries were made in both directions.

From Montreal to the CVR headquarters at St Albans and return was about 130 miles. Continuing on to Essex Junction added another 50 miles to our total for the day.

The schedule as published and as amended by my father appears below. As was the case during this era, the railway is operating on Standard Time while our watches are set to Daylight Saving Time.

Invariably, a delay from other rail traffic; or a mechanical problem (eg. slipped driver tire; water foaming; lubricator failure; stalling with a heavy train on wet rail with inadequate sanders) would intervene and a scheduled runpast might be sacrificed to avoid a return long after dark.

With everyone tired from a very early start for Central Station, the excitement, and fatigue from being buffeted by the wind through the open coach windows ... many junior railfans were ready for supper and bed while we still had a couple of hours left to travel. Returning to Central Station at 20hr from these excursions was fairly common.

Considering all of the above ... with the endorsement of many of us, there was often some really fast running at the end - giving one a taste of real mainline steam locomotive passenger operations. 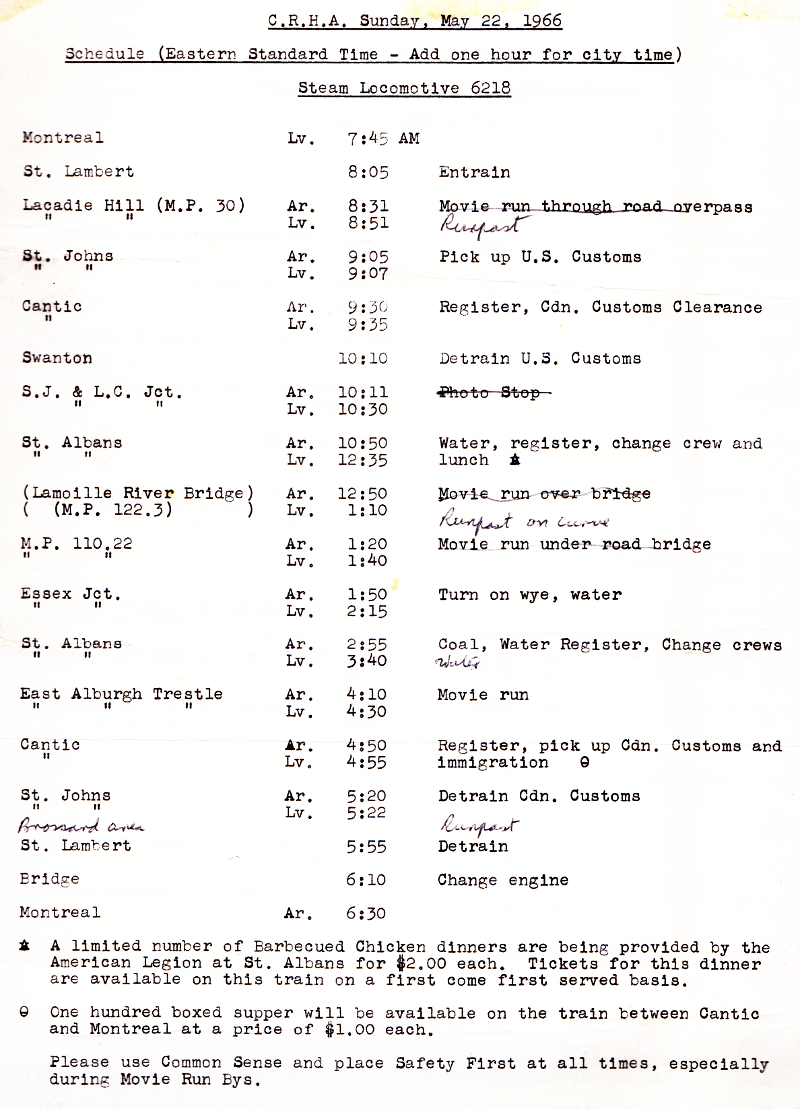 The map below, from 1912, shows the rail network and topography in a more accurate manner.

Notice that Essex Junction was likely named for its connection to Essex Center -
that trackage is not shown on the 1953 public timetable map.

Also notice our friends on the Delaware and Hudson on the west side of Lake Champlain.

At the north end of the map, above, there are railway bridges shown
over two arms of Lake Champlain.
I believe we crossed on the East Alburgh to West Swanton trestle,
but not the other.
Both were restricted to 10 mph.

Probably not crossed on the 1966 fantrip: 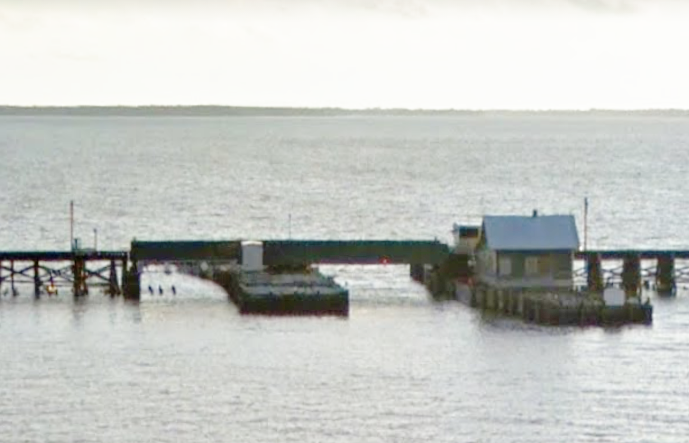 I was happy to find a photo including Stan Jones which I had taken.
My father is at the right, his teaching colleague is in the centre.
Each has a child in the photo.

As mentioned elsewhere - two years earlier, my father, my sister and I were on an ill-fated diesel-powered fantrip on a wayfreight operating Montreal to Hemmingford and return. Leaving at around 10hr from Turcot Yard, we returned at 23hr. There was no fast running anywhere on this trip - particularly as the south end of the line seemed slow-ordered before likely abandonment. As the last summer evening light was disappearing, and we were again waiting for traffic to clear, Stan dashed across the street to buy provisions for our starving parties. He also drove us home from Turcot - saving us a bus trip back to Lachine.

So Stan Jones has always had a special place in the family annals of our Montreal CRHA fantrips of the 1960s.

A southbound passenger train is approaching the St Albans station. 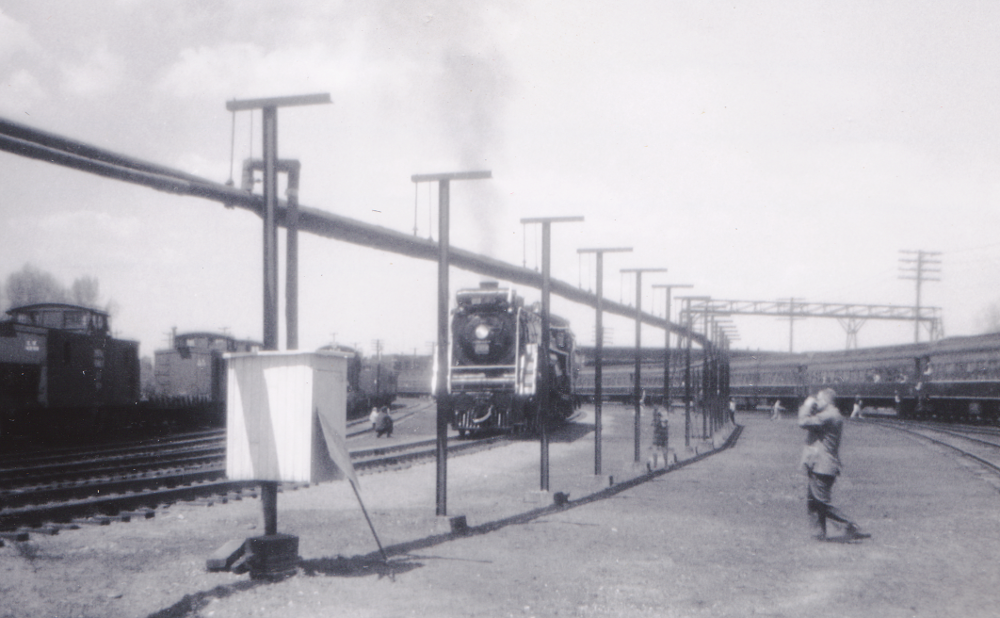 6218 is returning to the train after taking water at St Albans. 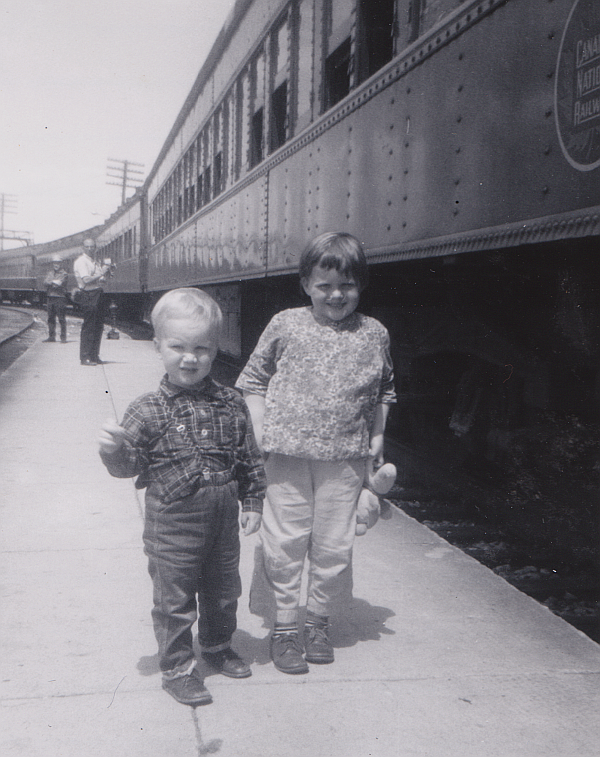 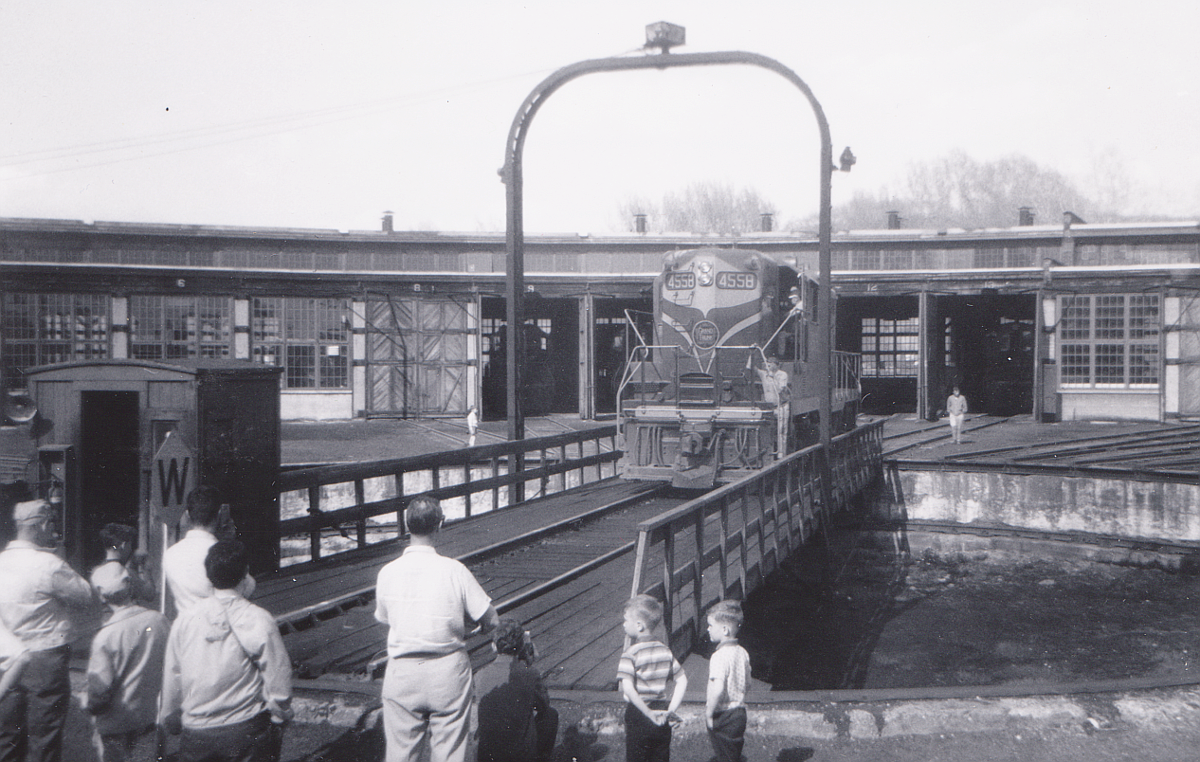 A Grand Trunk unit on the turntable at St Albans.

In this era, if a Canadian locomotive was in the US for more than 48 hours, it was subject to import duty.
So it was easier for the CNR to boost its CVR roster, as needed, using power from other US subsidiaries.

To gloss some ancient history, the Grand Trunk Railway became a majority shareholder in the Central Vermont circa 1897-1898. This gave the GTR greater access to the economic activity of New England and another Atlantic port at New London, Connecticut - about 100 miles east of New York City.

... In November 1927, unusually heavy rainfall in Vermont caused flooding which destroyed significant stretches of the CVR line between Essex Junction and White River Junction - almost 100 miles to the south. As the heir to the Grand Trunk Railway and its liabilities, it was the CNR which rebuilt the line along the White and Winooski Rivers at a cost of $3 million (about $50 million in 2017).

The St Albans Station and Trainshed The St Albans station and headquarters building
as photographed during our fantrip in May 1966.

The St Albans yard, shops and station as they appeared around 1870.

An undated view of the 'timetable north' side of the station and trainshed taken by Philip R Hastings from the top of coaling tower.
This is detail from a photograph which also shows the roundhouse to the left of the photo.