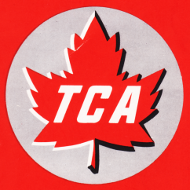 Canadian National Railways had controlling ownership of Trans-Canada Air Lines when it was first established. Here is the government's account - from the Canada Handbook of 1946 - of how Canada's 'flag carrier' began.

Canadians had desired an 'All Red' route for their first transcontinental railway. Before that, crossing the continent expeditiously might have involved using existing American railroads for part of the trip.

A similar situation had evolved with North American aviation. As a technology of war, great progress had been made in the development of aircraft during the Great War. However, travelling over large expanses of wilderness, or mountains, during a Canadian winter ... required technology beyond that of the Sopwith Camels, SPADs and Fokker triplanes - or even that of a Vickers Vimy, the first aircraft to make a non-stop crossing of the Atlantic.

Canada's vast, largely empty, wilderness was an impediment to setting up airways and aviation infrastructure. And economic activity to support a Canadian transcontinental commercial operation was lacking on most route segments.

However, float planes were just the thing for flying in supplies and people to remote northern mining locations. The Great War aerial photography techniques used to document enemy trenches and artillery could be adapted to finally map Canada's undocumented interior.

After the worst years of the Great Depression, the establishment of a Canadian transcontinental airline became justifiable to the Government of Canada. To what extent Transportation Minister CD Howe was anticipating another European war is not stated. Certainly, TCA became essential to the Canadian war effort.

It should be noted that the Canadian Pacific Railway and its subsidiary, Canadian Pacific Air Lines, became involved in setting up the wartime trans-Atlantic aircraft ferrying system. This began by transporting American-built aircraft to Britain via Gander, Newfoundland. Ferrying avoided the inefficiency of aircraft disassembly for shipping and subsequent reassembly in England - freeing valuable British industrial labour for other duties. As well, ferried aircraft were safe from German U-boat operations - the latter were destroying a lot of convoy shipping early in the war. In 1941, with the Battle of Britain over, and the threat of German invasion of Britain less of a danger, Ferry Command was taken over by the Royal Air Force.

On page 122 of the second article (below) CPA's activities are described.

The first article gives a lot of detail about the early years of Canada's national airline - TCA. 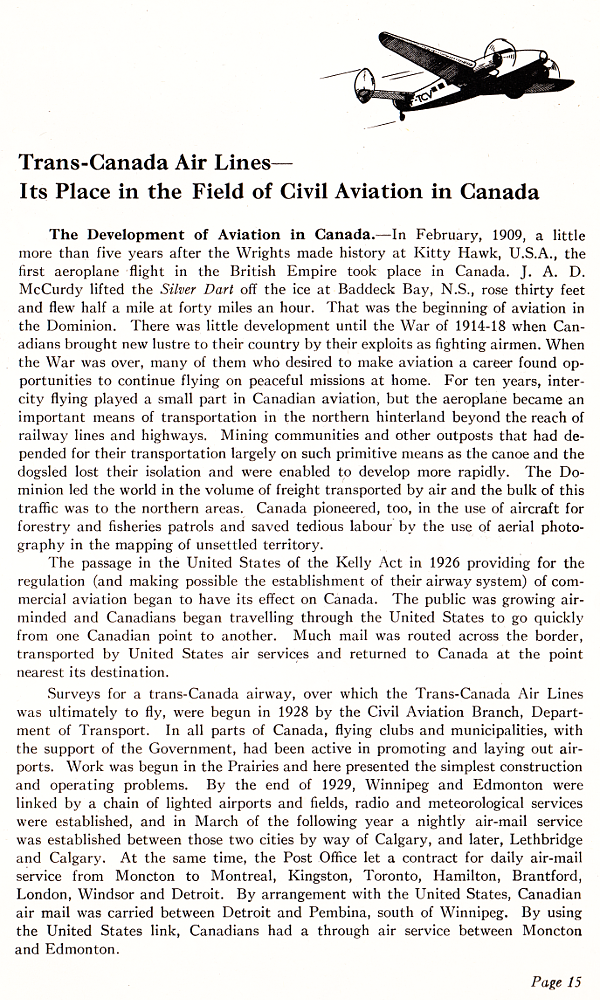 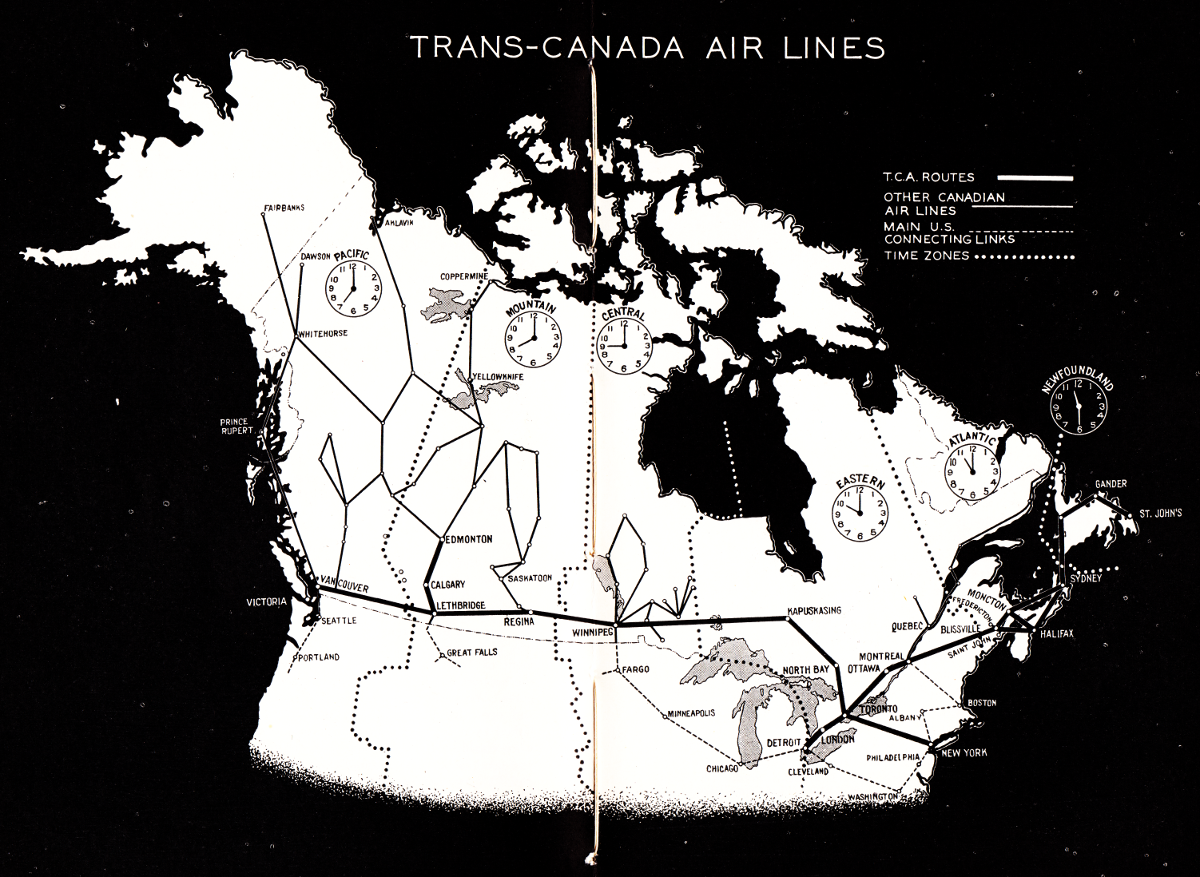 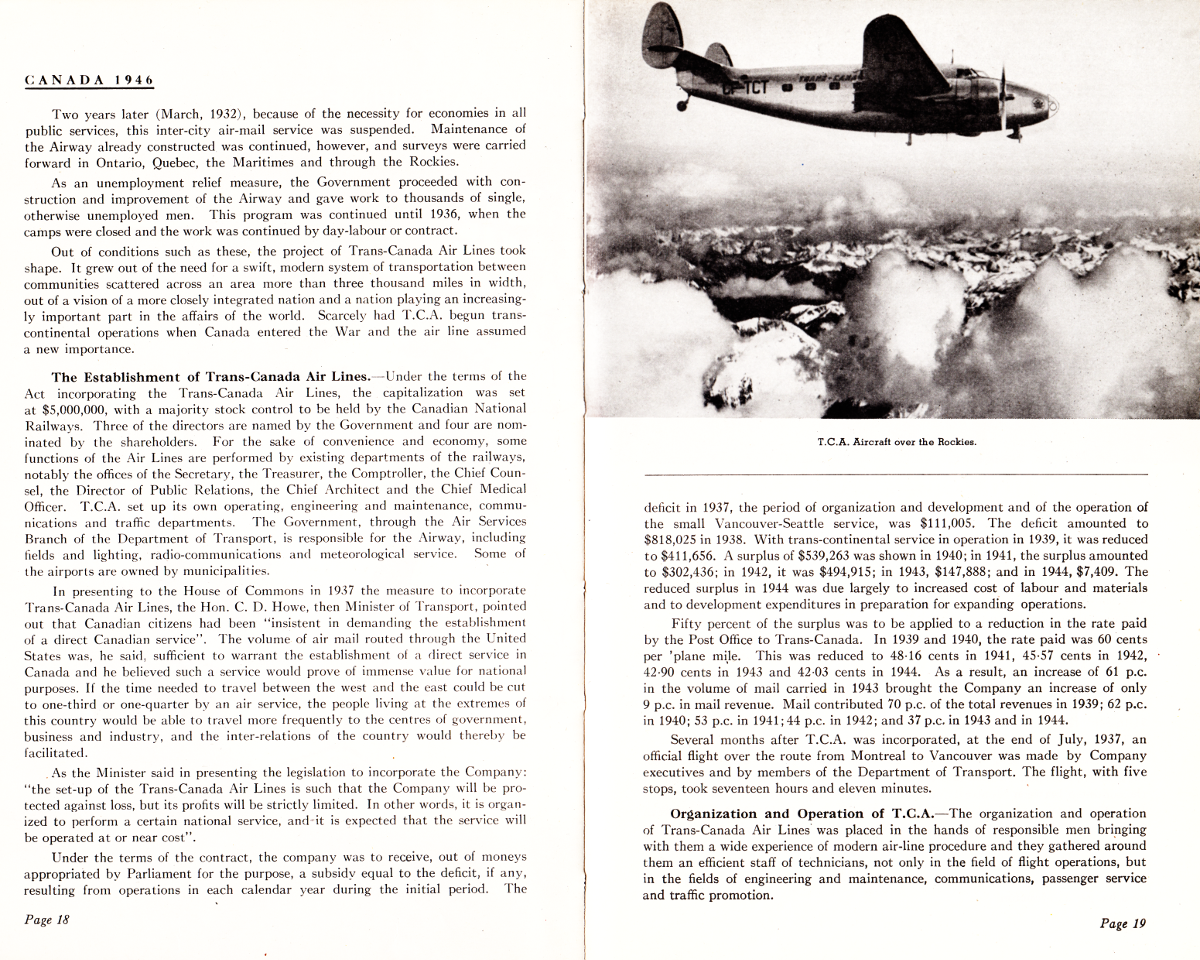 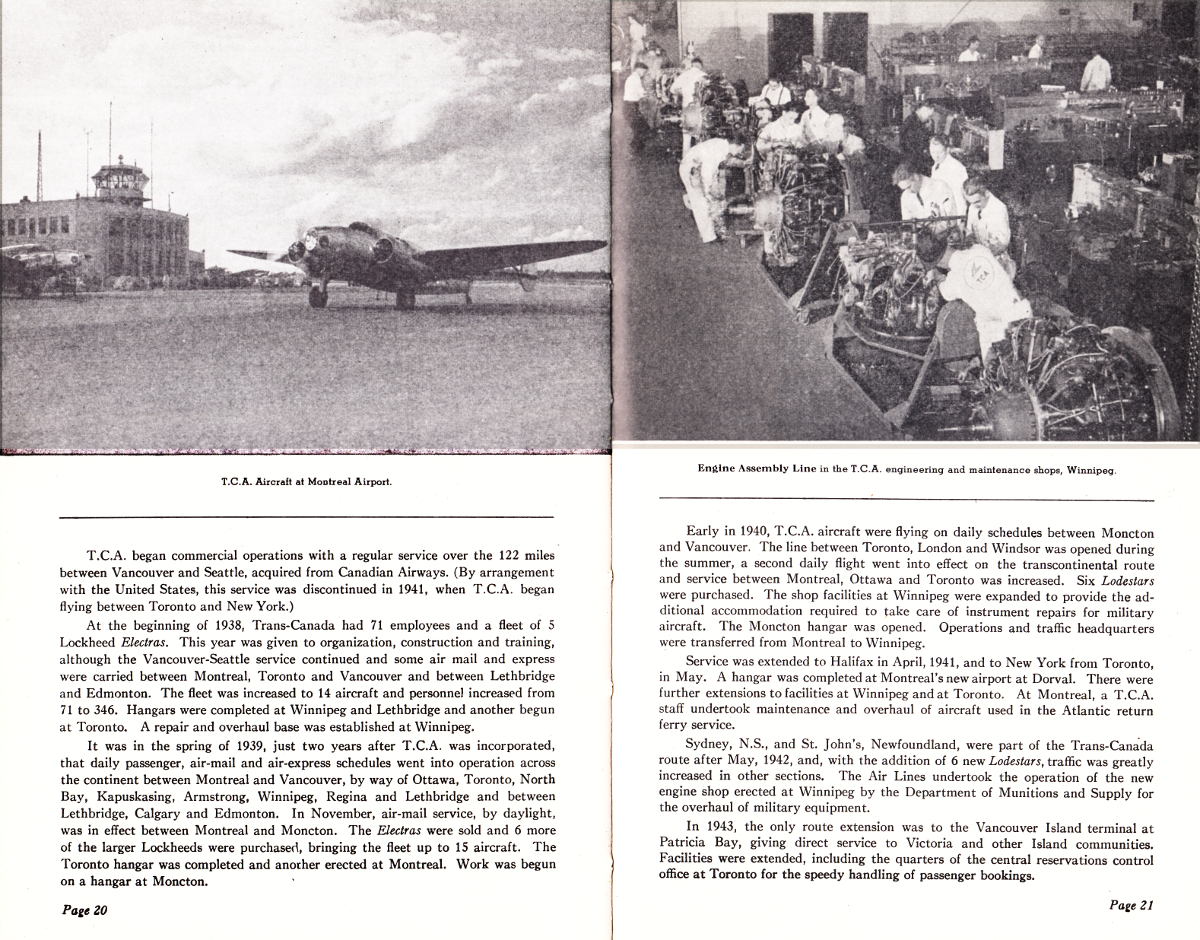 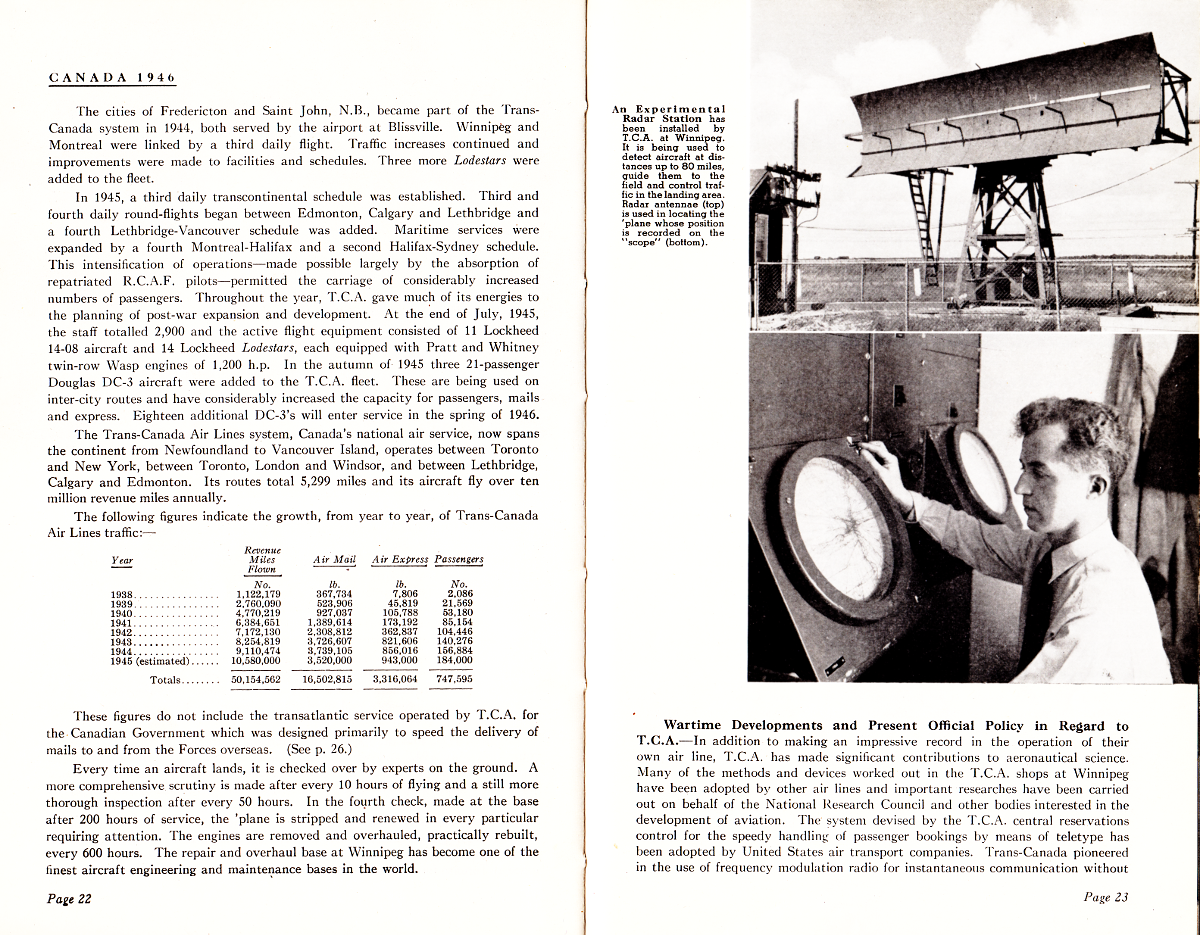 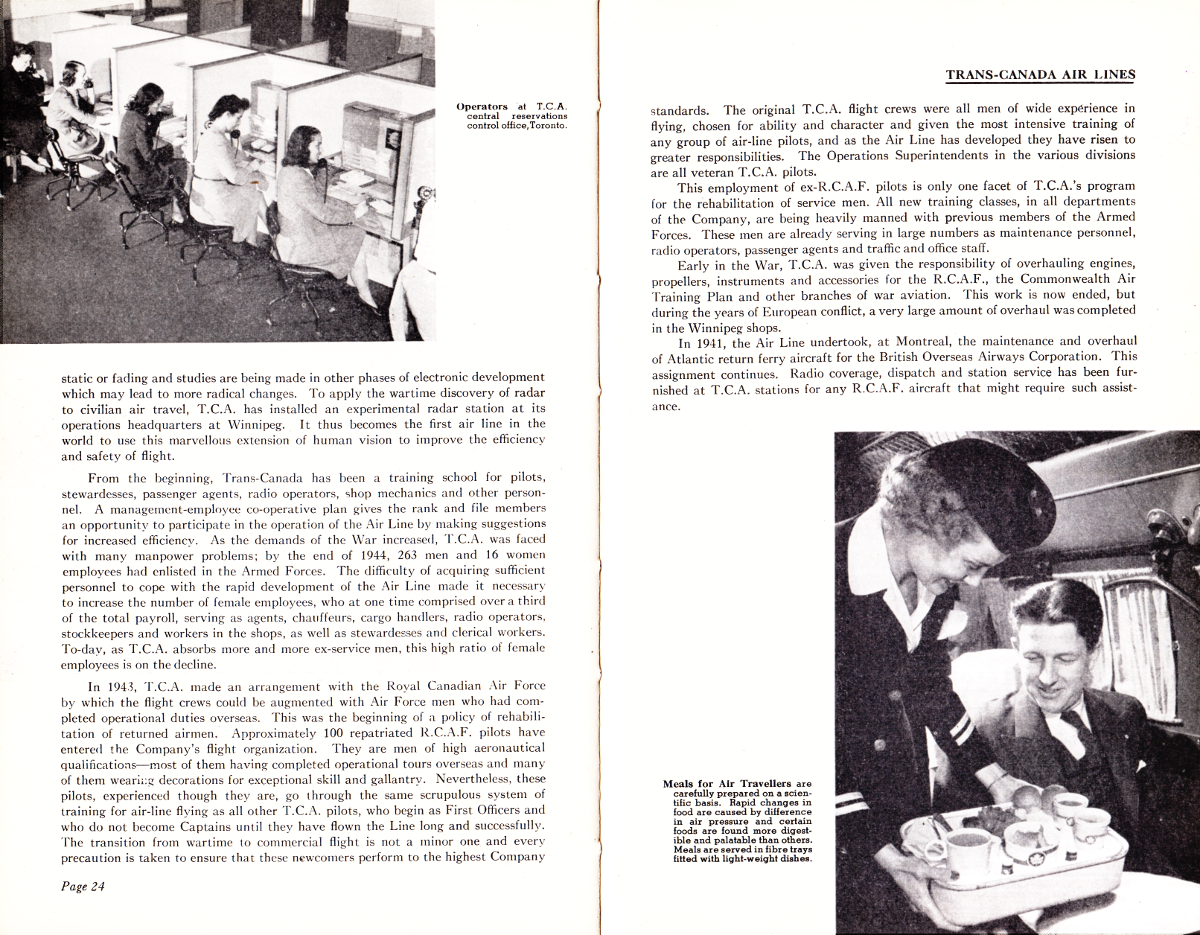 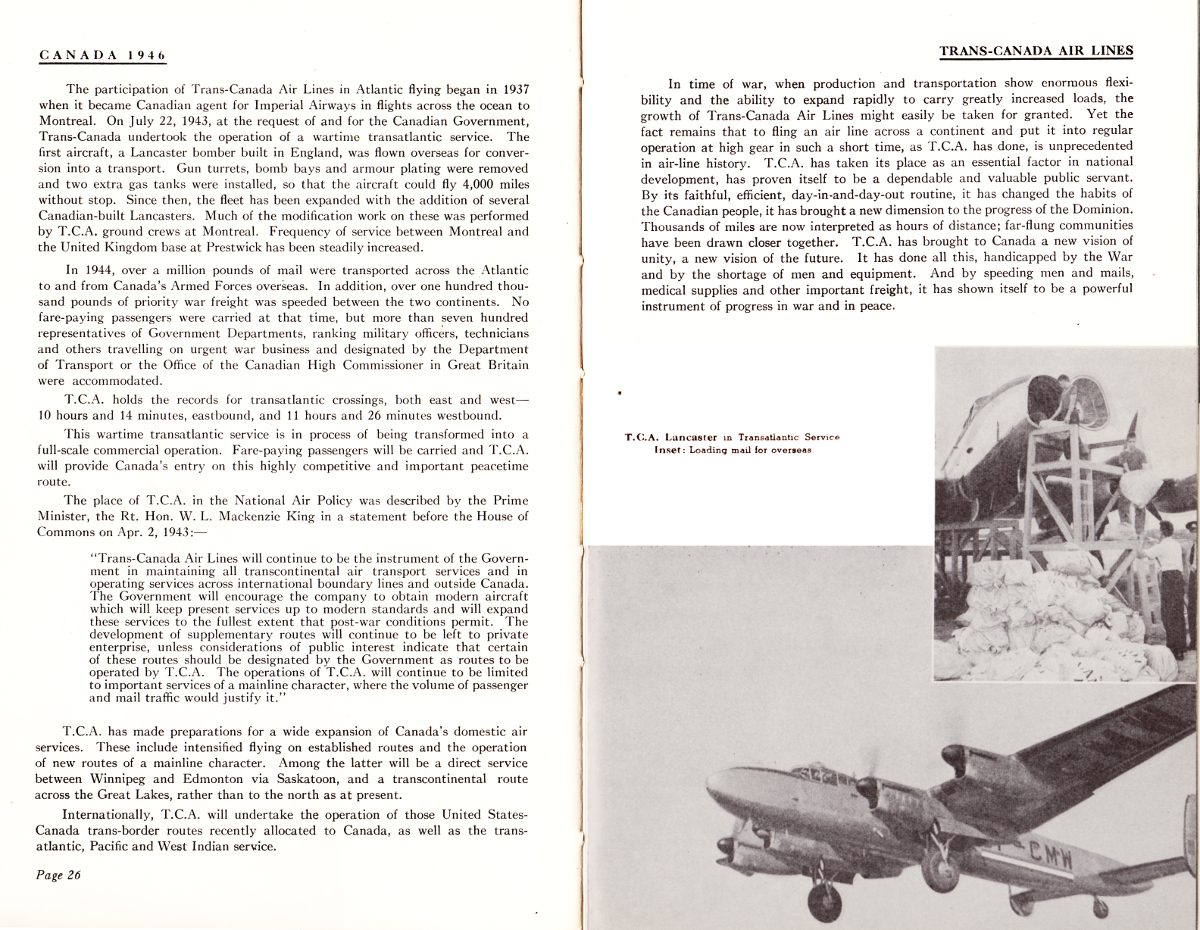 Also from the 1946 Canada Handbook, an overview of Canadian air transportation: 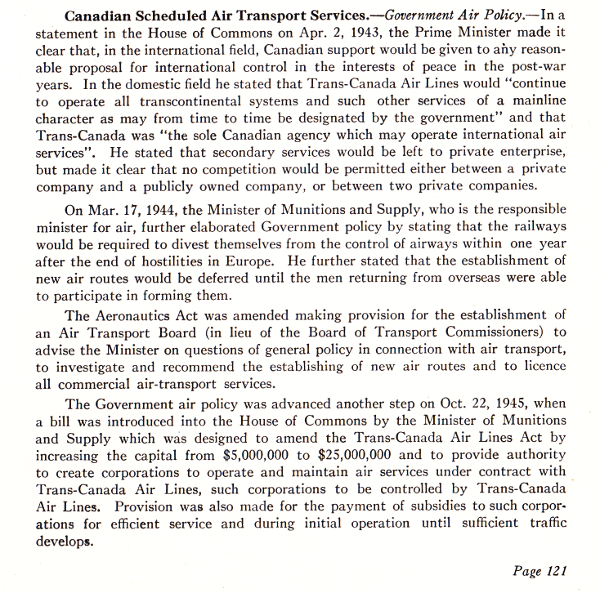 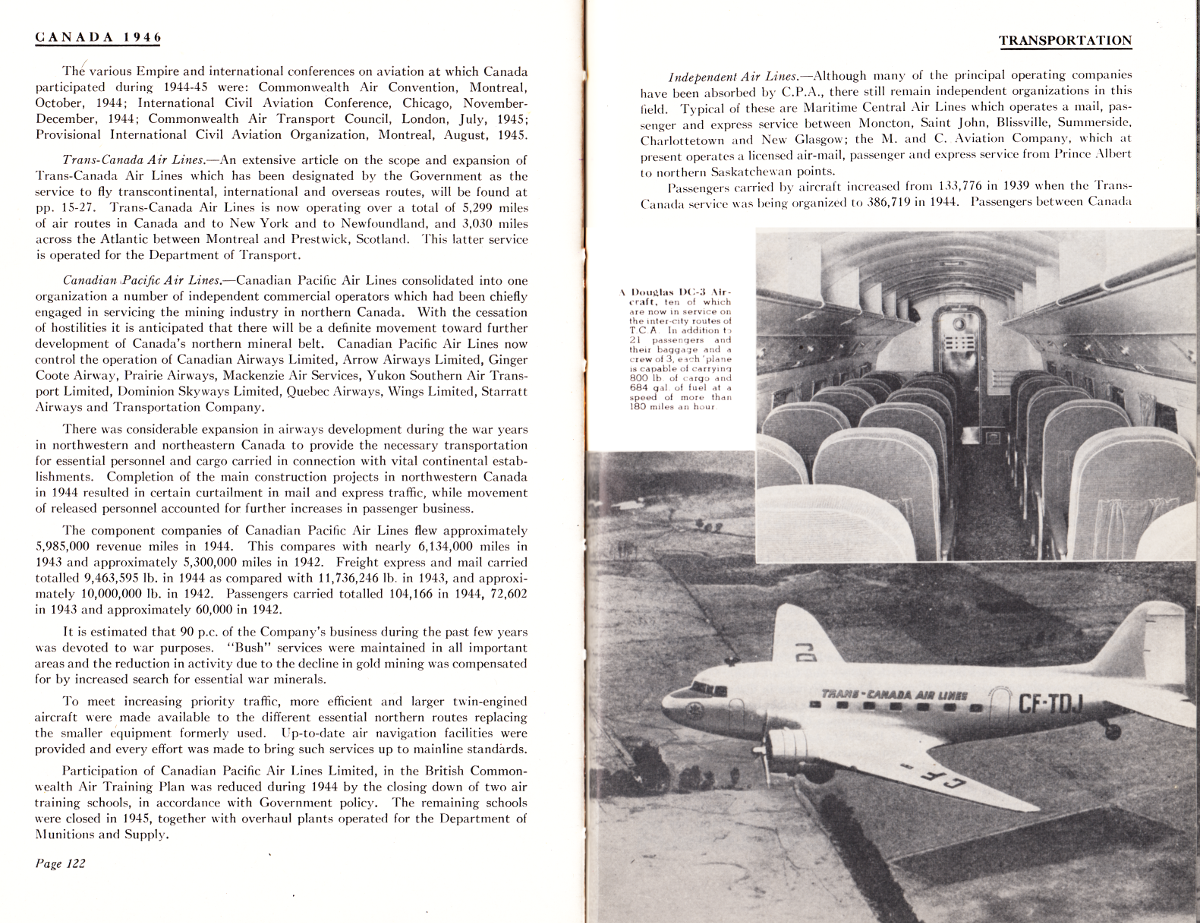 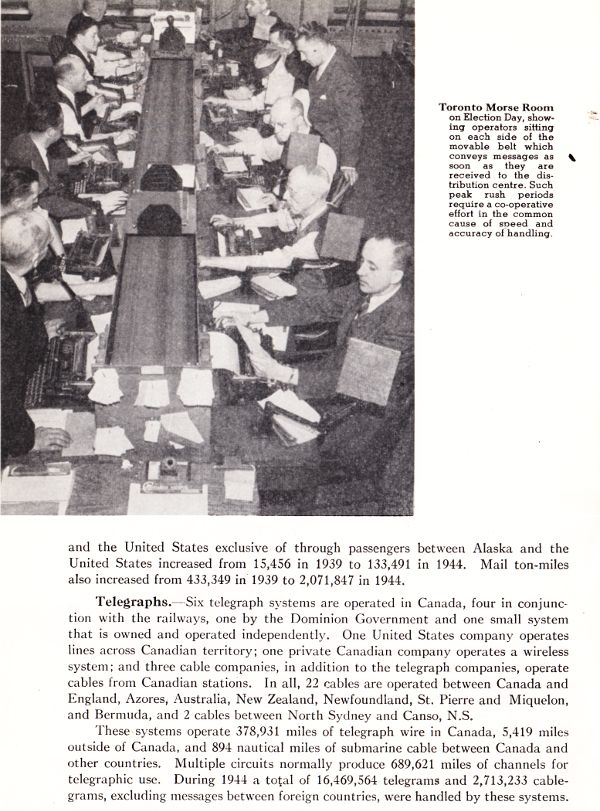 My father obtained and preserved a Trans-Canada wartime schedule. 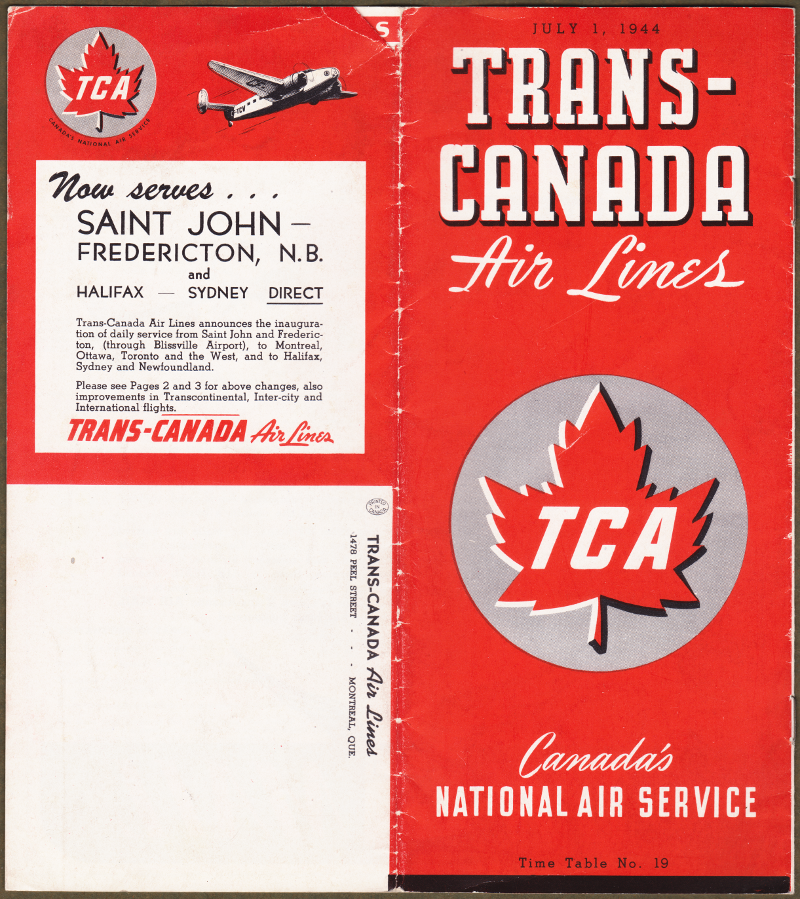 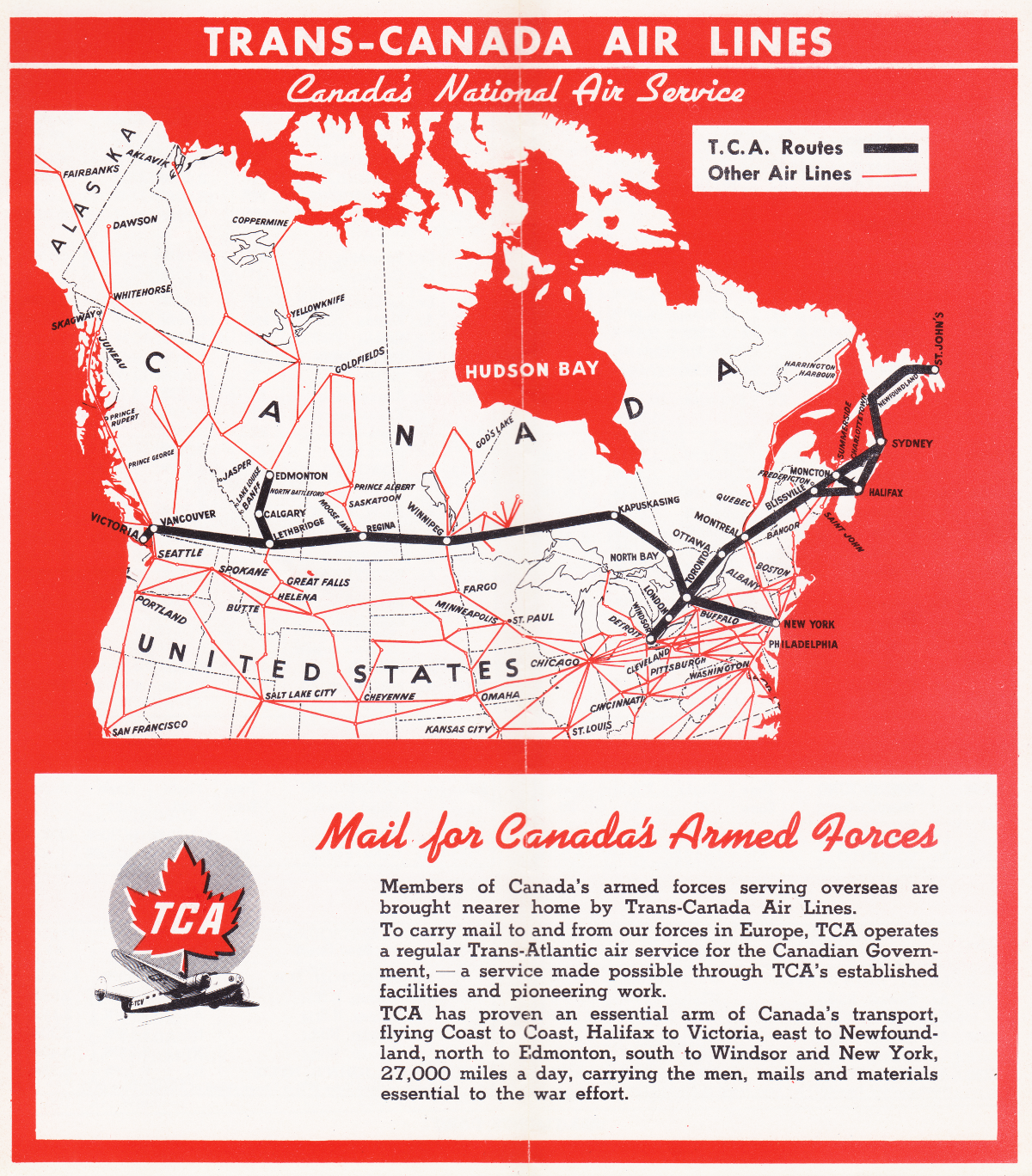 Notice below that passengers were prohibited from using cameras.
This language persisted in the schedules printed after the war as well. 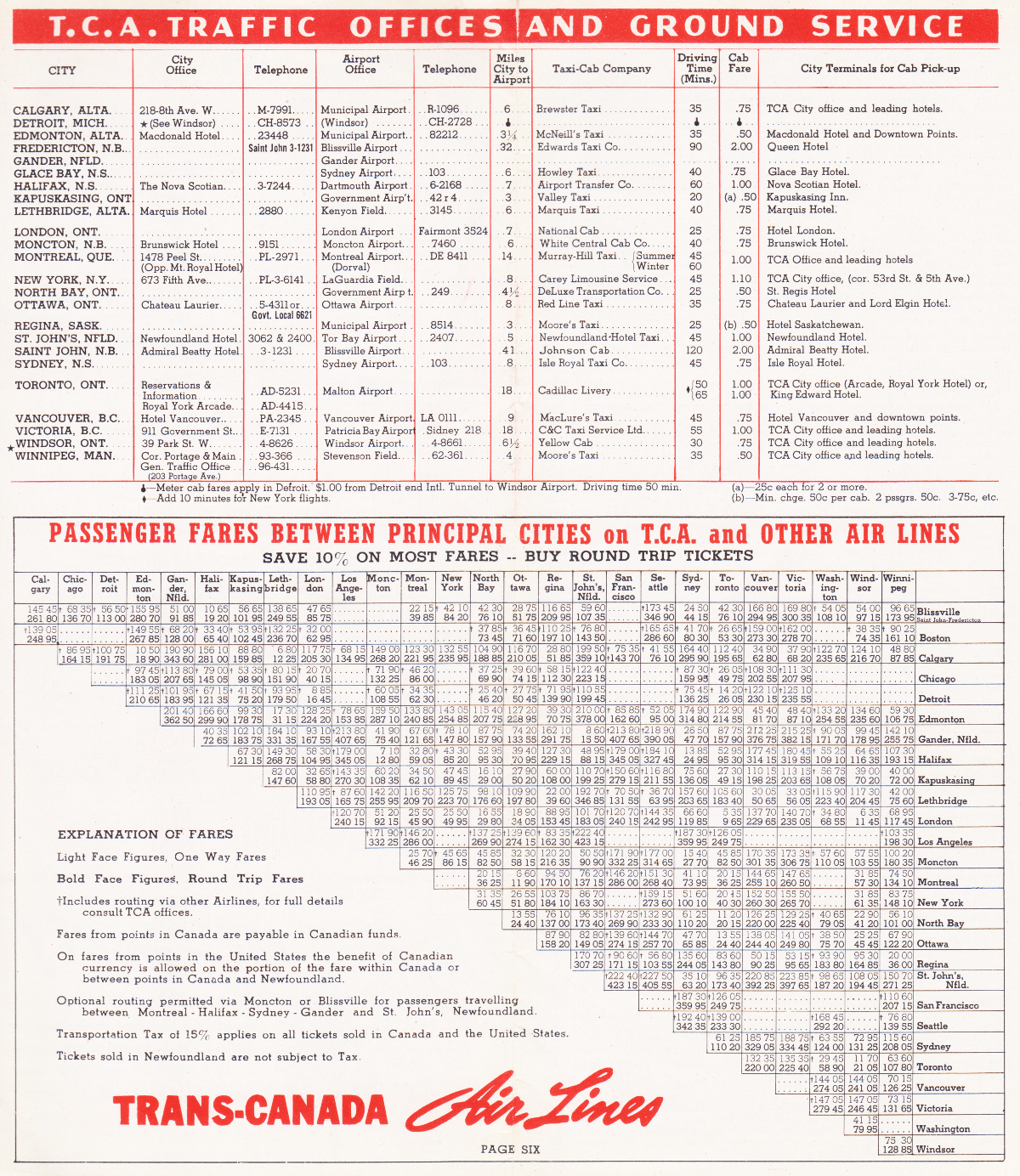