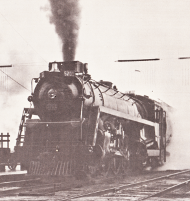 To understand Pool Trains, perhaps it is almost enough to understand how VIA Rail was started. After the failures to thrive of the CPR's Canadian and the CNR's Turbo, both of those railways were officially finished with passenger service ... At least in the sense that they'd had it with passenger trains!

VIA Rail could absorb their motley unmatched steam-heated equipment, use their poorly-maintained stations and pay for the expensive work rules of their legacy crews. And if there was a 'problem' - such as a railway employee mistakenly putting water in a VIA fuel tank - the rules were set up so that VIA would pay for it.

To some extent, VIA could succeed where the two railways had competed. Its expensive antiques could provide service with less regard to only joining CNR or CPR dots on a map.

Pool trains were the products of decades of politician-encouraged railway overbuilding, increasing railway competition between the CPR and the consolidating government-owned CNR, the rise of the automobile ... and the Great Depression pushed the whole mess over a cliff.

In the Pool train era it was hard for the two railways to "cooperate" - shudder! - and they only found a few routes between major eastern centres where they could succeed at this. As an incentive, they didn't have to pay as many workers to crew, maintain and otherwise support the trains and probably more equipment could be stored as a result.

In 1933, days before the first Pool trains ran, Hitler consolidated his hold on power in Germany. No one could have foreseen he would eventually be the stimulus which would end the Great Depression. No one knew if or when the Depression would ever end.

Probably, from the railway presidents to the car cleaners, everyone just hoped to keep their jobs and survive. If the new conventional wisdom was that "cooperation" was suddenly necessary, it was probably worth a try.

I've tried to assemble some sources from that period of time which tell the story in a contemporary voice. The first is from a friendly biography of the late Edward Beatty from 1951, but the other items follow chronologically ...

The following four images are from:

Born in Sudbury and growing up there and in Vancouver, Leslie Fournier (1901-1961) completed his formal education as an economist with a PhD from Berkeley in 1927. He had an interesting and distinguished career as an economist. He was teaching at Princeton when he wrote Railway Nationalization.

Securities fanatics and enthusiasts of the Great Depression will be interested in the fact that he left Princeton to work for the nascent Securities and Exchange Commision, 1937-1946. 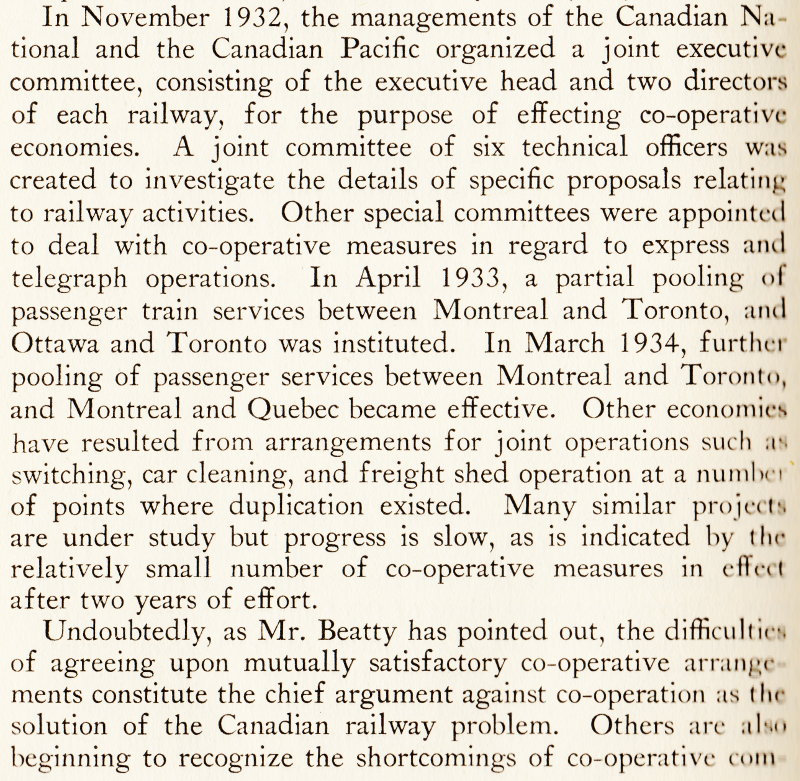 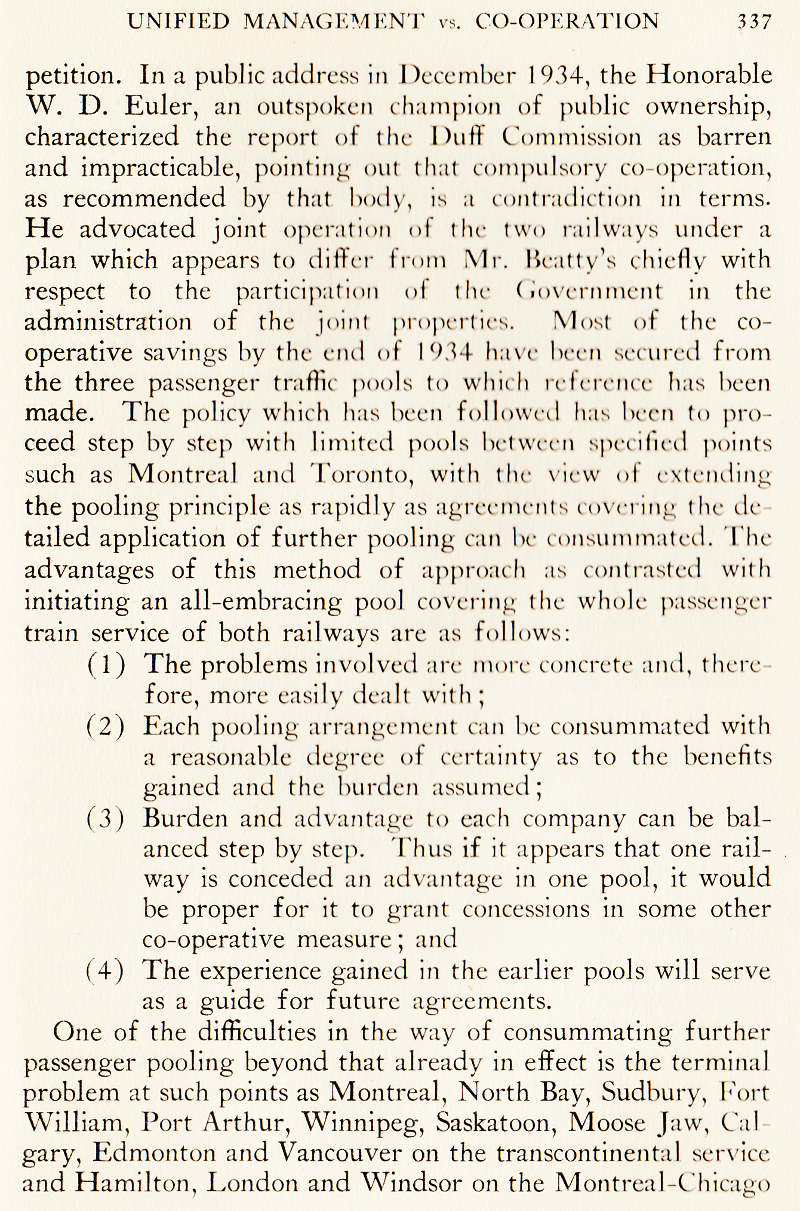 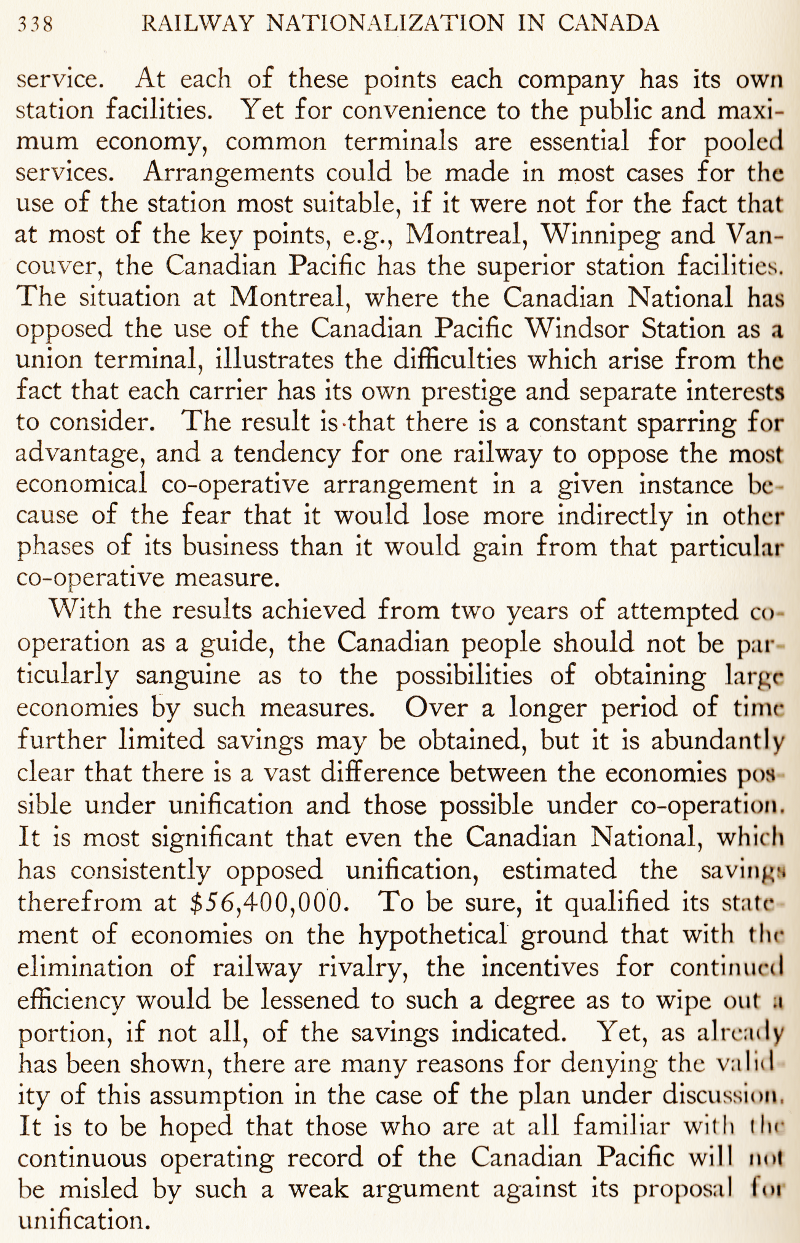 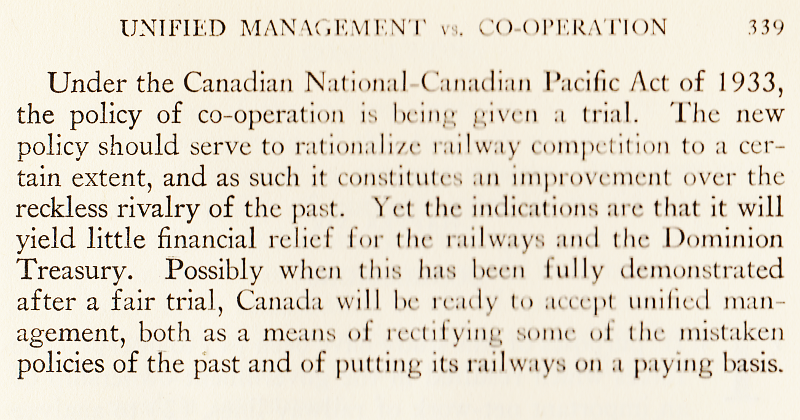 My first encounter with Dr Nicholls would have been circa 1966. My father and I had driven or MTC'd in from Lachine for an evening meeting of the CRHA in a very warm, dark room. Dr Nicholls was giving a slide presentation on CPR's Jubilee class of steam locomotives. During the break, a few rows down in the lecture room, an 'old guy' was looking over his new Monkees album - their first.

According to the 1963 article's introduction:

In the 1962 House of Commons Railways Committee, CNR President Donald Gordon indicated that the CNR and CPR might look at dividing local and transcontinental passenger services. Where one was dominant, it would provide all service - leaving the other to eliminate its passenger service there. There were no further specifics, but it reminded some of the initiation of Pool Train services ... which were still ongoing in the 1960s as the article was published.

In 1963, CRHA President Nicholls' earlier (1933) article and photos of the initiation of Pool train service were reprinted. He also photographed the last two runs of the CNR and CPR trains which were henceforth to run as a single train using pooled equipment, crews, etc.

Nicholls, in 1933, reported that the consist of CNR Pool equipment was observed at Turcot Yard before it travelled west to Dorval. There, it reversed over the connecting track to the CPR. The CNR 5704 had some trouble on the slippery rails as it ascended to the CPR main track at Dorval.

Then, the 5704 reversed with its consist to Windsor Station, coupled to the consist's CPR first class coach and loaded passengers. Finally, operating as the first Pool train (photo above), it used the connecting track to regain the CNR rails for its trip to Toronto.

Lots of 'great' ideas were hatching during the Depression.
Over the years, designers have had trouble realizing that Canadian trains also run in winter.


Below, you can see that the train pooling idea seems to have really taken off.

The CPR timetable integrates all the CNR stations. A train running through from Montreal to Chicago, such as Pool 21 uses the Pool ticketing process only as far as Toronto. Beyond that, Train 21 is a CPR train. Below are the equipment consists for many of the trains shown. As the traffic density decreases, the pooling activity thins out.

If you keep following the Pool tables downward through this post,
you should find that even the most obscure Pool routes can be pieced back together.

I have included full timetable pages in all cases because there is lots of extra 'fun' content to see. For members of the general public (and employees, too) these tables display a great deal of information and one wonders how many passengers required help in planning and completing their journeys.

The planners and printers are certainly earning their money in producing these tables.

Could a phone-based app convey all this data as effectively as 'dead trees' do? Historical Fun Facts ... to consider as you read the Pool Rules fine print below ...

Canadian car ownership was far, far from universal in the 1920s and 1930s. Most people didn't drive their automobiles in the Canadian winter during the decades around the Great Depression. There were no regularly plowed and salted superhighways connecting major cities.

... So consider that the railways almost had a monopoly on dependable city-to-city transportation.

Pool trains were not invented to make travelling easier - the railways were told to cooperate to save money.

I have provided a virtual Rosetta Stone of English-French Pool Train language below. Imagine a situation where a passenger was trying to purchase a ticket under the more exotic Pool Rules ... from a ticket agent not fluent in the passenger's mother tongue. 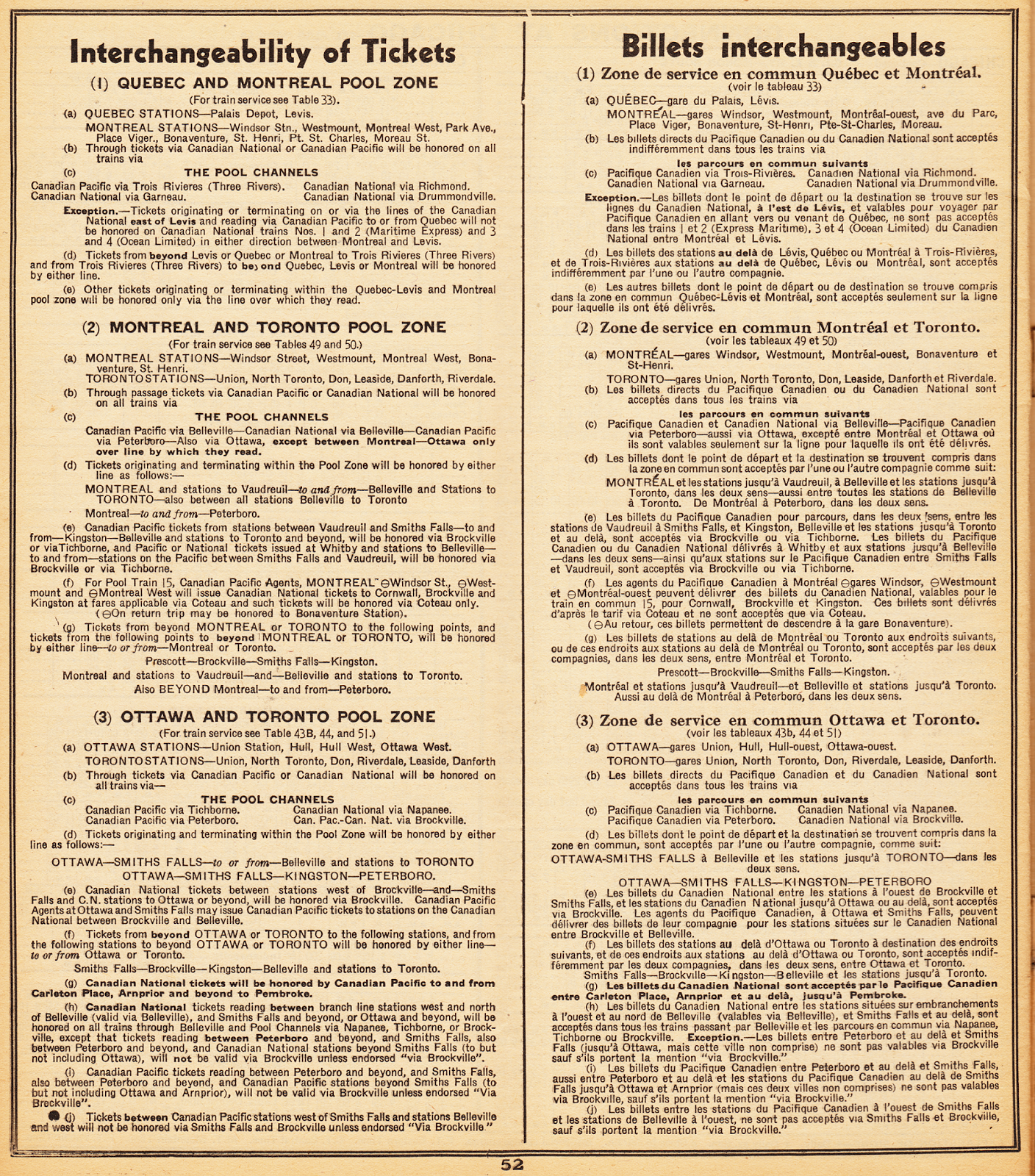 Other parts of this series will look at Pool trains during and after World War Two.