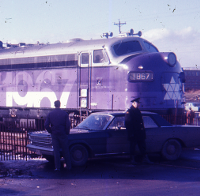 In 1967 - as I write this it was 50 years ago -  I was about a decade old, and the adults around us were making a big deal about celebrating "the centennial of Canadian confederation". A century prior to that, the three provinces of Canada, Nova Scotia and New Brunswick had confederated themselves as the Dominion of Canada.

In 1867, the Americans were still tidying up after their Civil War and they were also building railroads from sea to sea. They were making the British North American colonies mighty nervous and they helped precipitate all this confederating.

In 1867, some other potential provinces were holding out for a better confederation deal. Almost always these provinces wanted money for a money-losing railway ... either existing and over-built ... or non-existing with the explicit understanding that it would be over-built in the future.

With our rich railway history in mind ...

I think this is how the adults figured out that the Confederation Train
would be the biggest federal Centennial Project of 1967 ...

Got it! ... Find some railway equipment, put a museum in it, make it FREE !

And paint it PURPLE so the 19 year old Baby Boomer kids
will feel like they're 'Sticking It to The Man' when they visit.

We saw the Confederation Train at Lachine and again at Dorval. The train was here on the Lachine Wharf Spur, November 24-26, 1967. The tailend is at Notre Dame, just west of 29th Avenue. The headend is facing east, toward Montreal.

... I couldn't calculate carlengths to figure out exactly which street is crossing here ... if I was any good at estimating 'carlengths' I'd probably still be a trainman.
*  *  *


On the nose of the lead unit is the Centennial logo.
One triangle for each province, one triangle for 'all the territories up north somewhere'.
The stem represents the stem.

The large whistle is designed to play the first four notes of 'O Canada' - a perfect Rule 14 (l).
But safety regulators ultimately required the use of a standard whistle for grade crossings.

The Confederation Train is a very specialized, and now a very obscure, bit of Canadian railway history.
Below is the only coverage I could find in contemporary Canadian Rail or Trains.

Madame Vanier is the spouse of Governor General Georges Vanier -
a Great War veteran of distinguished service, he was ailing and would die a few months later.


This blog is a proud purveyor of specialized obscurity.


Many years ago, I purchased a duo-tang full of the blank forms and procedures used to ensure the Confederation Train was properly checked and maintained during its travels on at least the two major railways all across Canada. Unfortunately, there are no forms completed with actual operating data.

Other posts will also fill in details from contemporary sources on the government's perspective on how Canada's centennial celebrations had been planned and organized. Some readers will remember that there were also truck caravans to take similar museum exhibits to communities unable to host the Confederation Train.

A personal account I read recently regretted the fact that Montreal got Expo 67 but the west only got a dumb train. As you'll see, Expo 67 was not a federal project in the way that the train and other federal celebrations were. A great deal of emphasis was also put on personal centennial projects and local projects to celebrate the centennial.

Getting back to Confederation Train artifacts, the most boring generic items are in this post. Here are the mechanical and electrical checklists used to ensure the reliable operation of the train's motive power. Perhaps they were extracted from standard training or procedure manuals for maintaining motive power at shops. These sheets look as if they were cut, pasted and photocopied under the Confederation Train heading.

Keep in mind that the headend equipment would idling for days on end at locations away from fully-equipped shops. 'Museum heat' was provided by steam generators. Half of the passenger cars in the consist were used for 'museum support' and staff accommodation. This would not have been a cheap project to set up and operate for a year in all types of Canadian weather.

This particular diesel technology was less than two decades old at the time, and steam locomotives had only been eliminated on major Canadian railways about six years earlier. If nothing else, the sheets following below show the technology of 50 years ago. 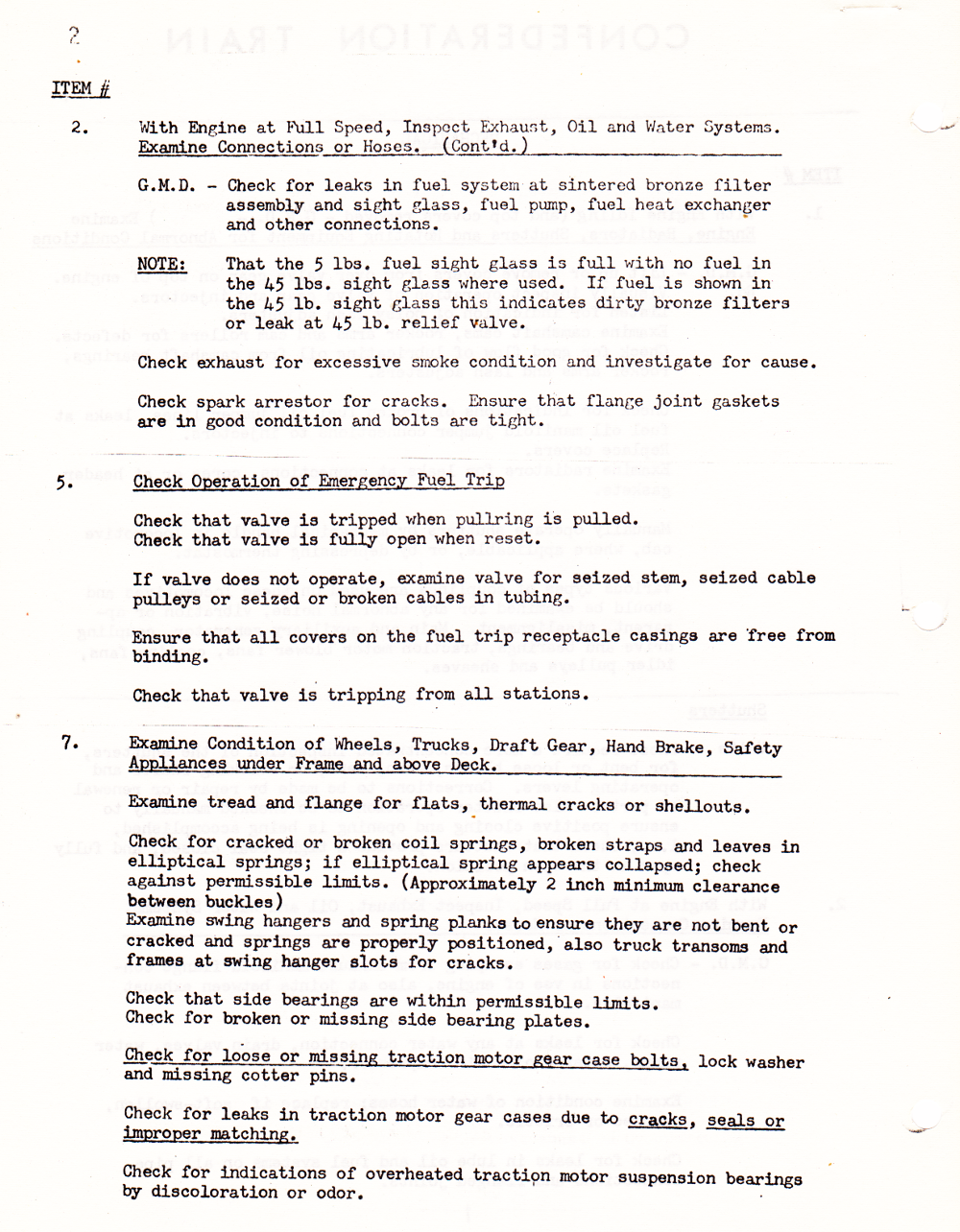 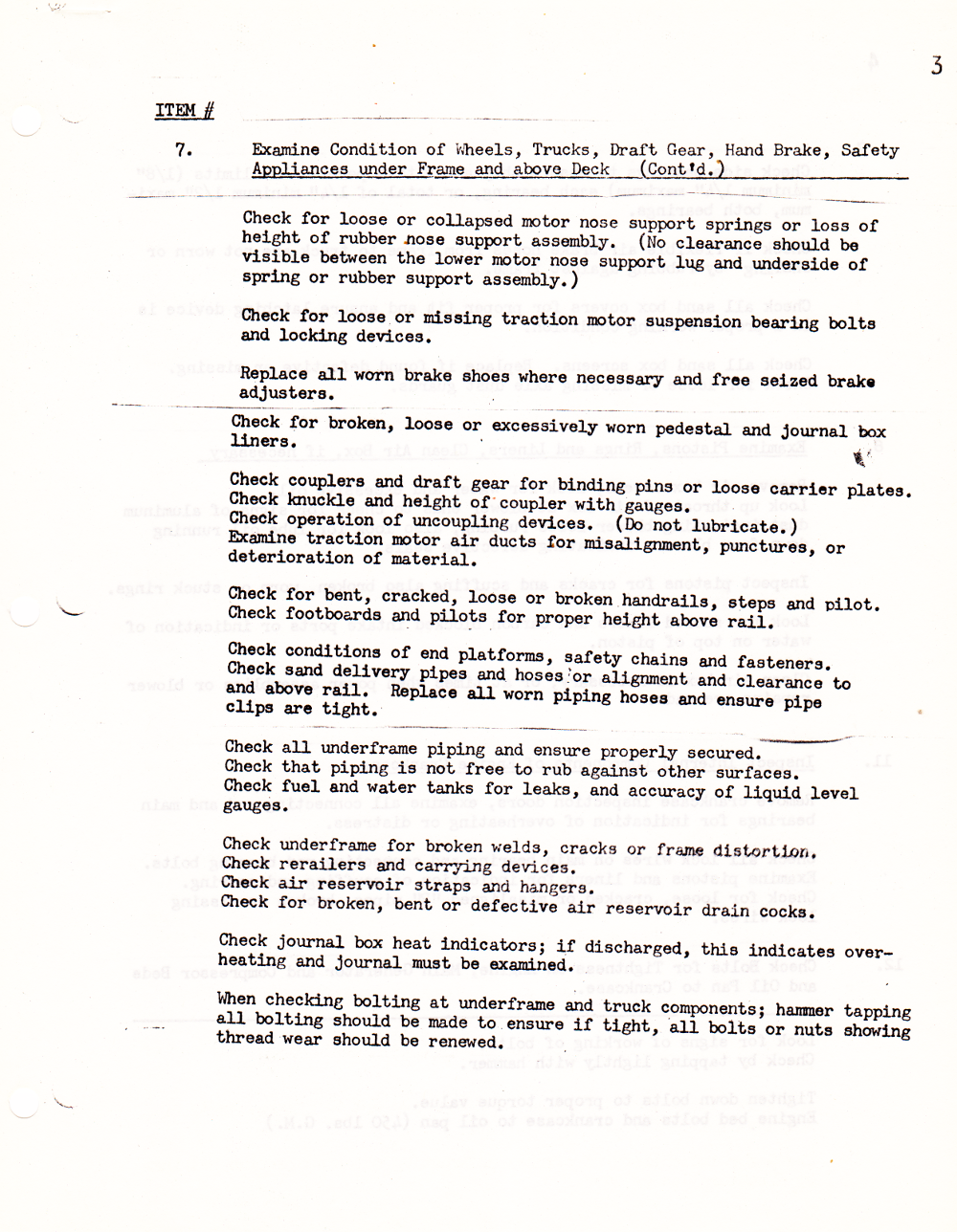 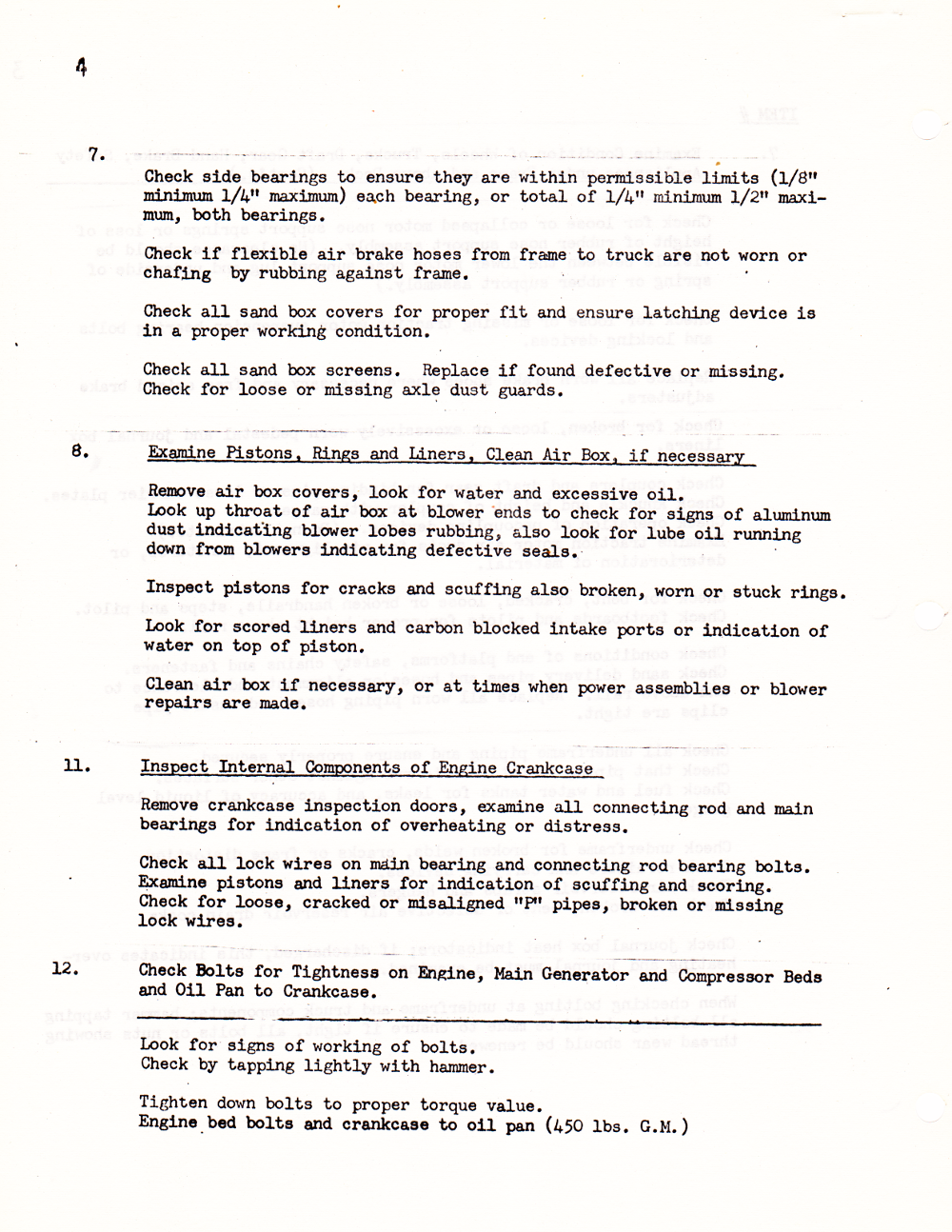 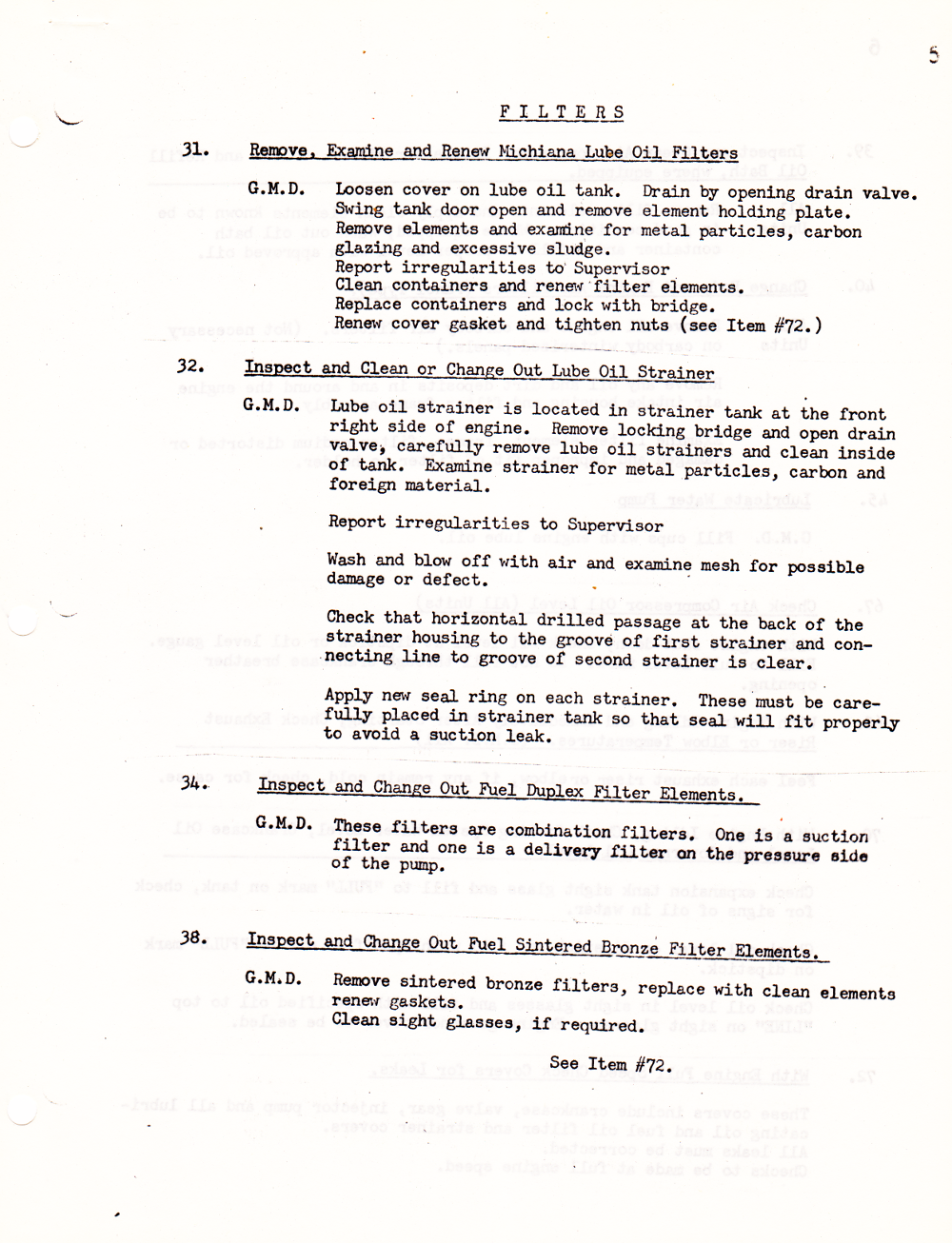 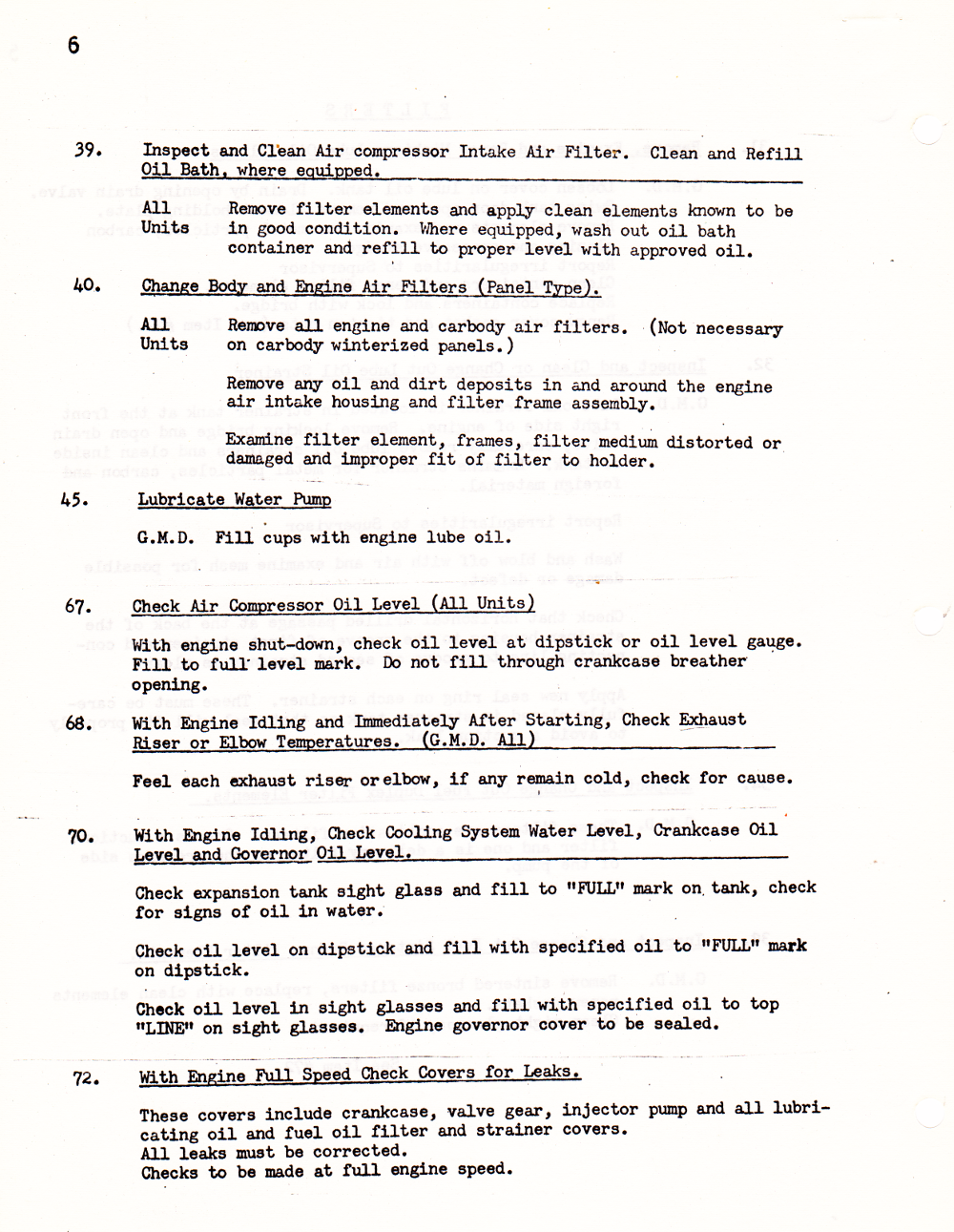 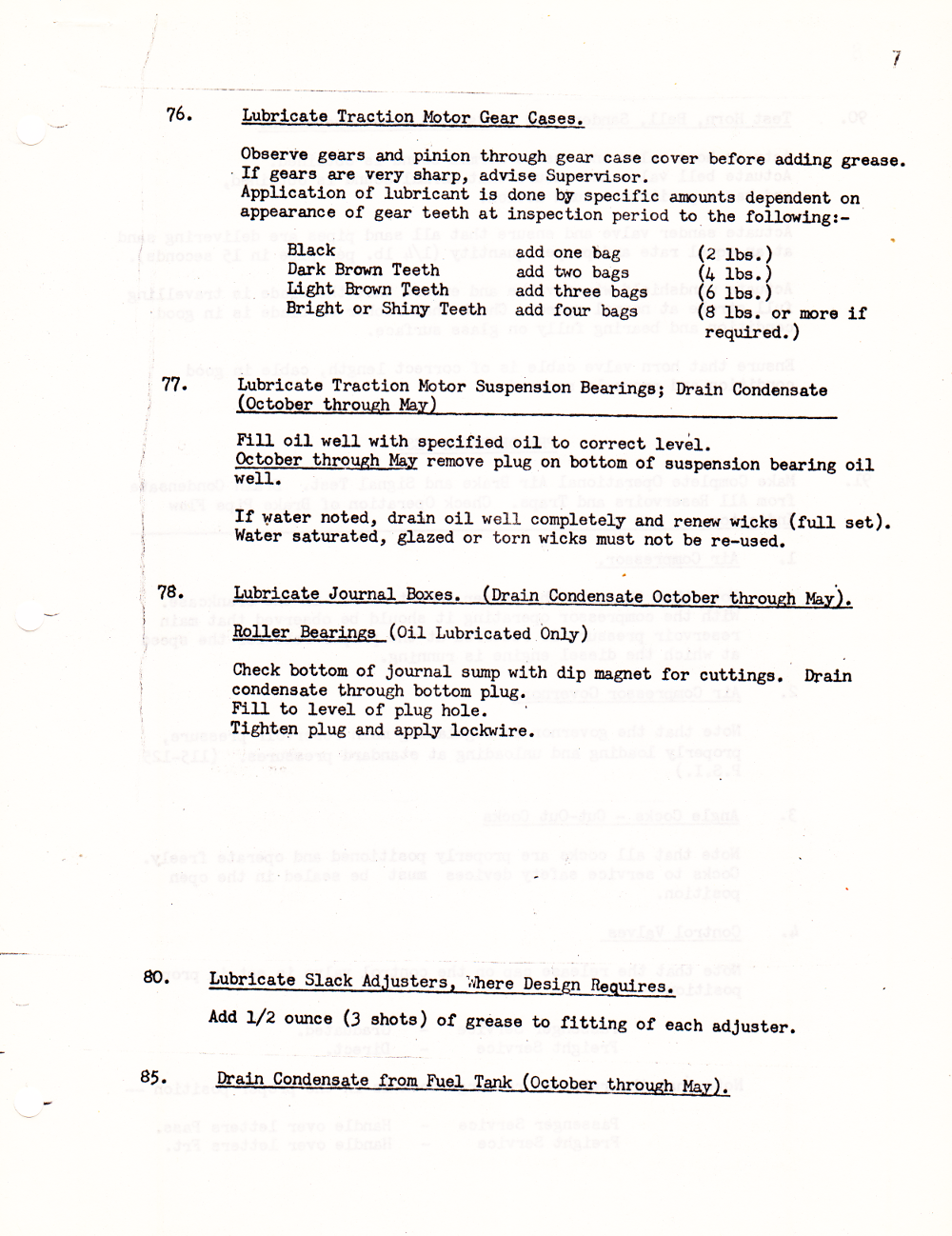 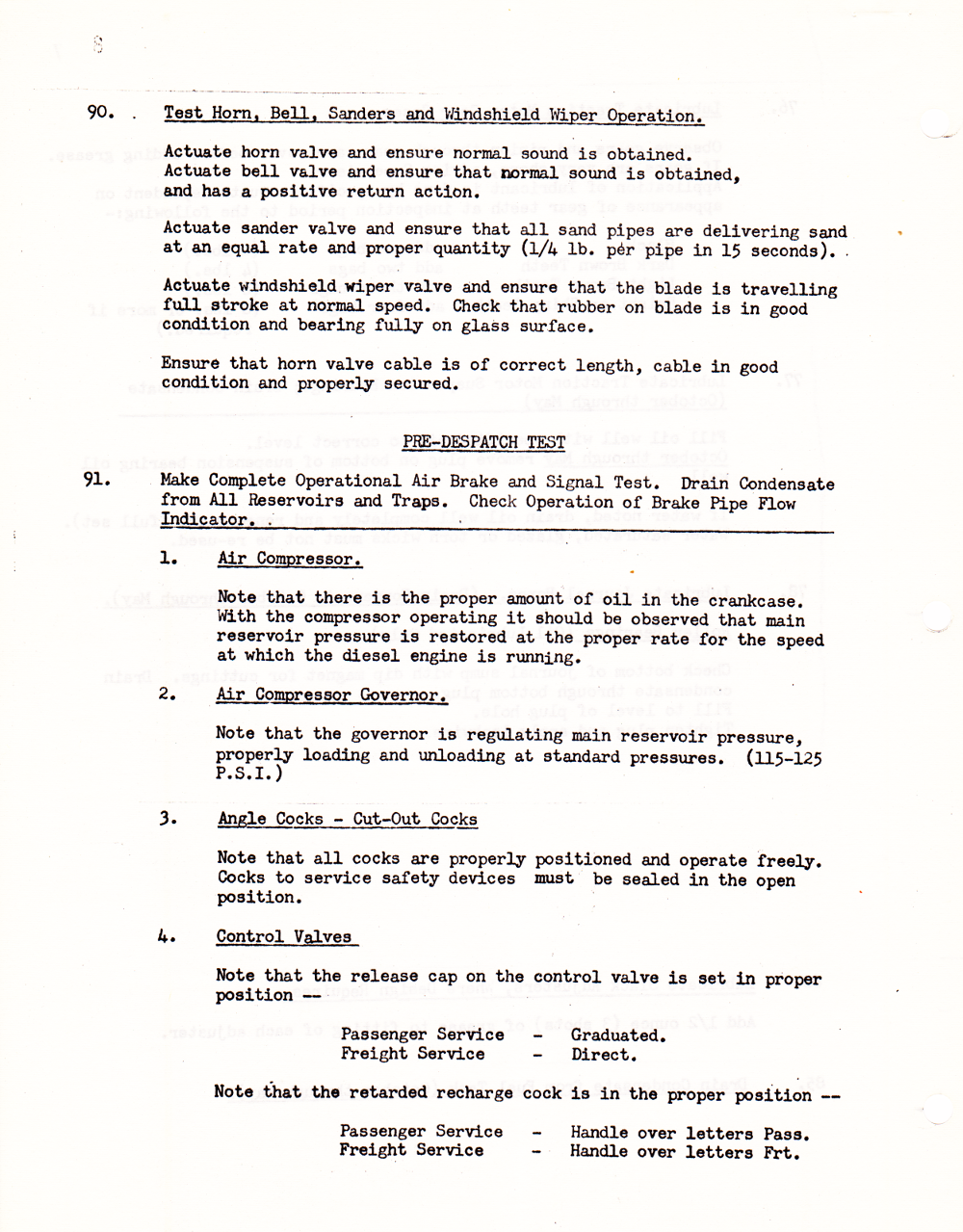 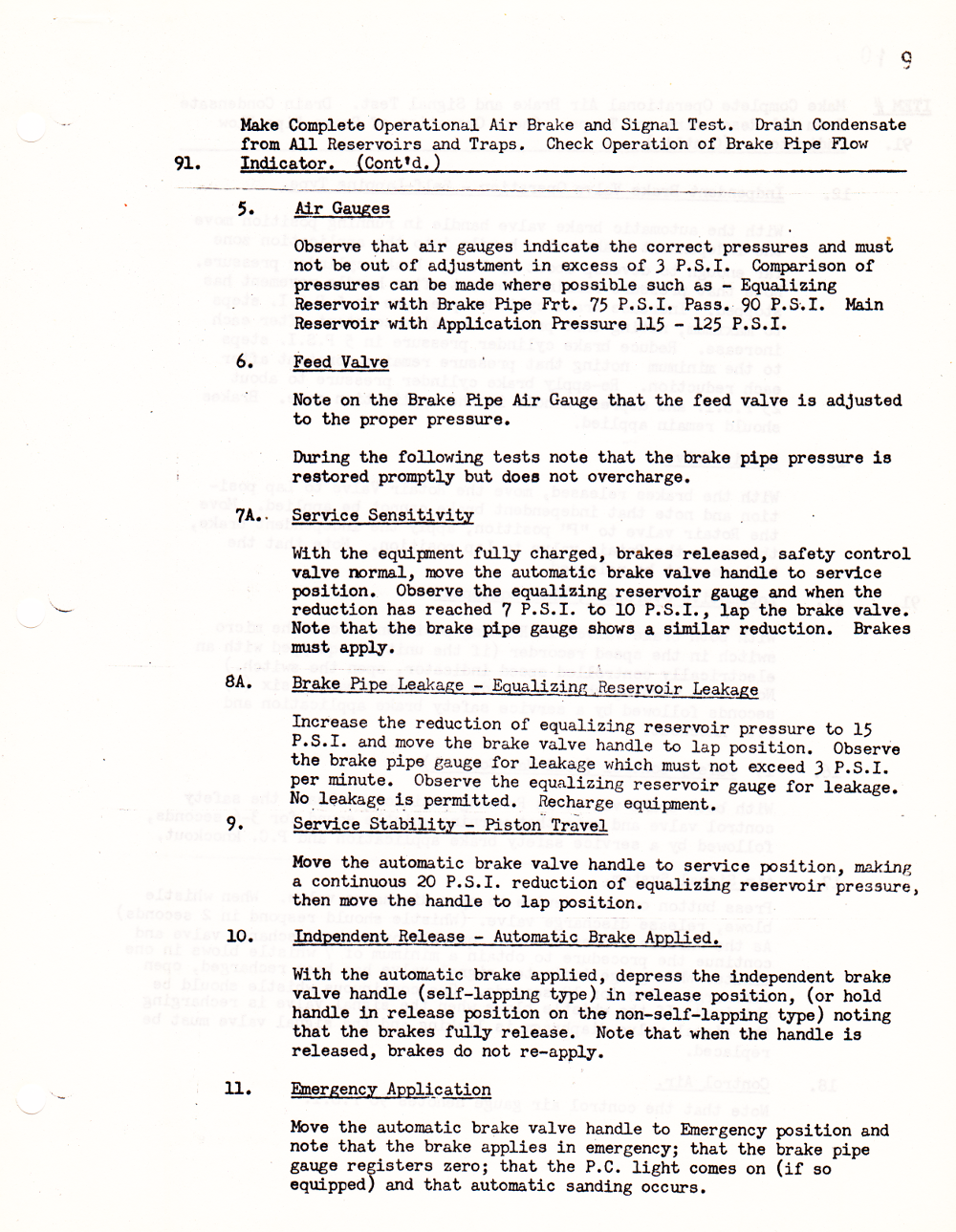 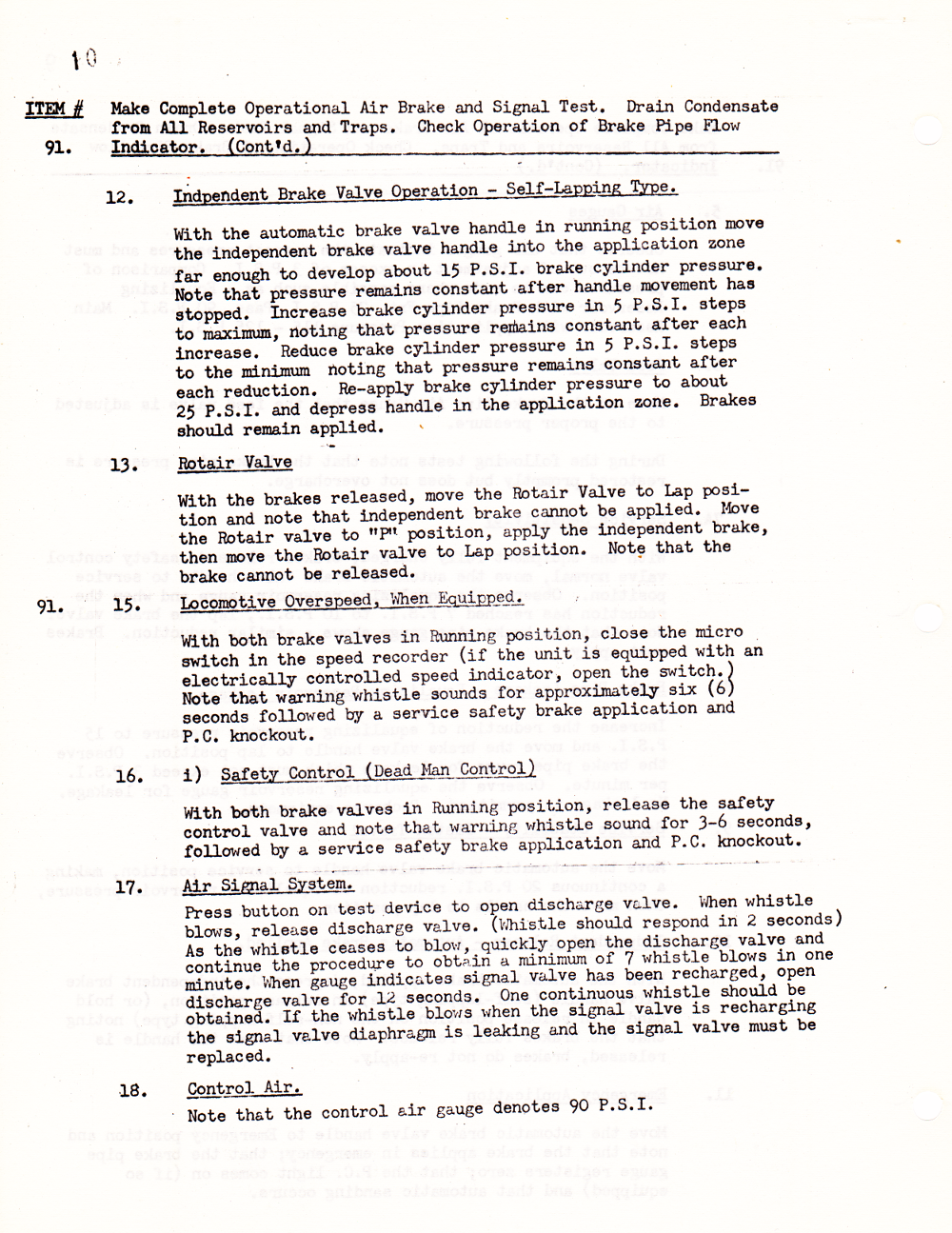 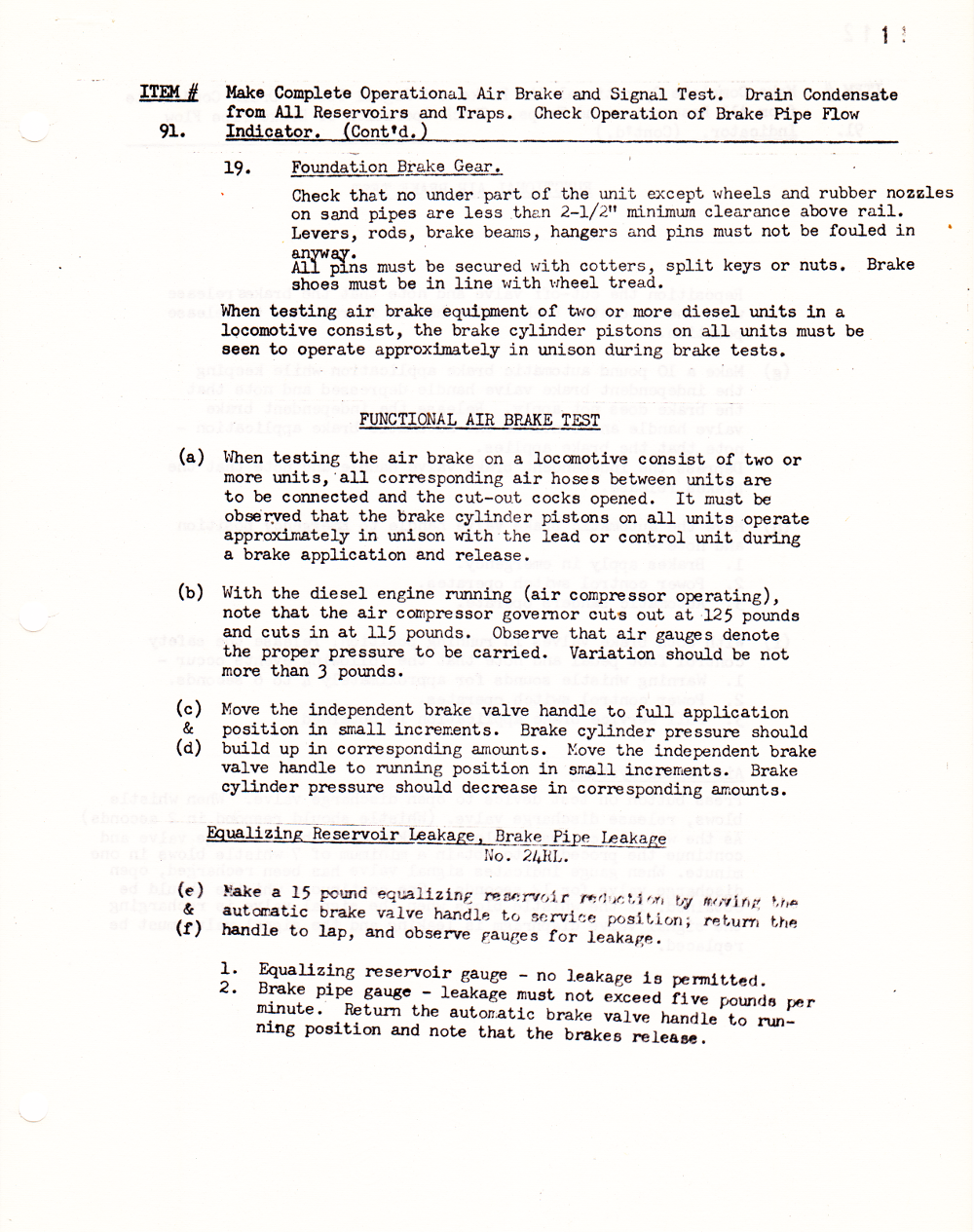 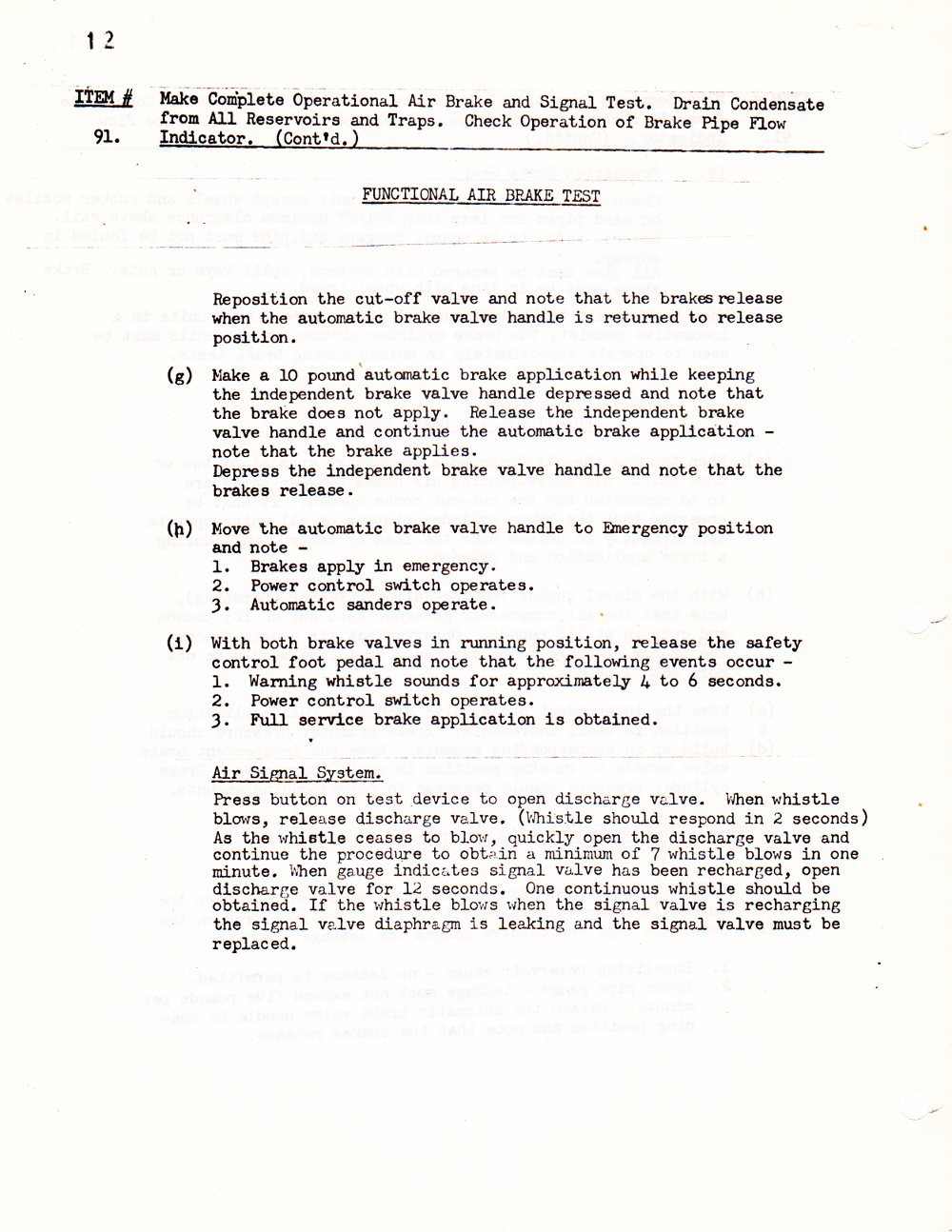 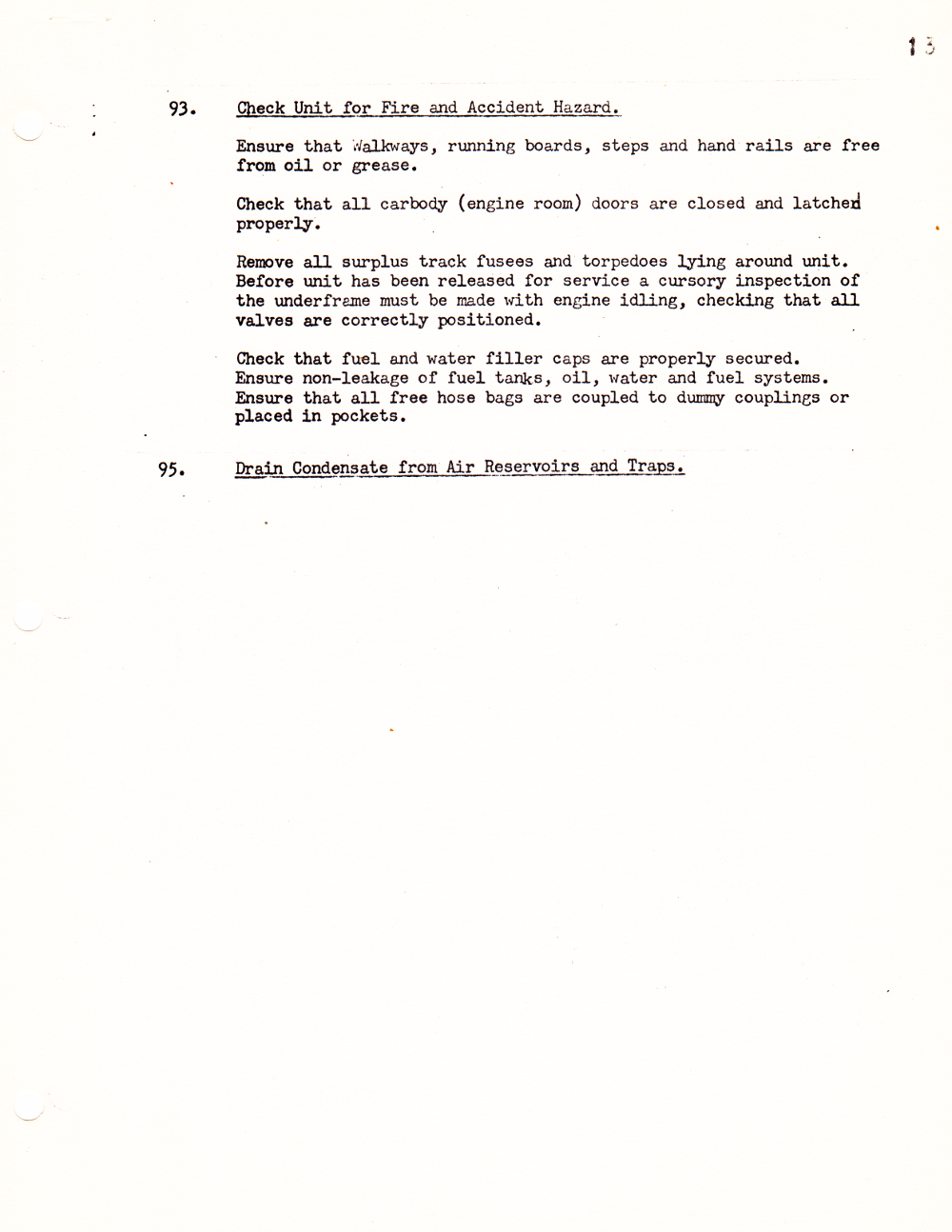 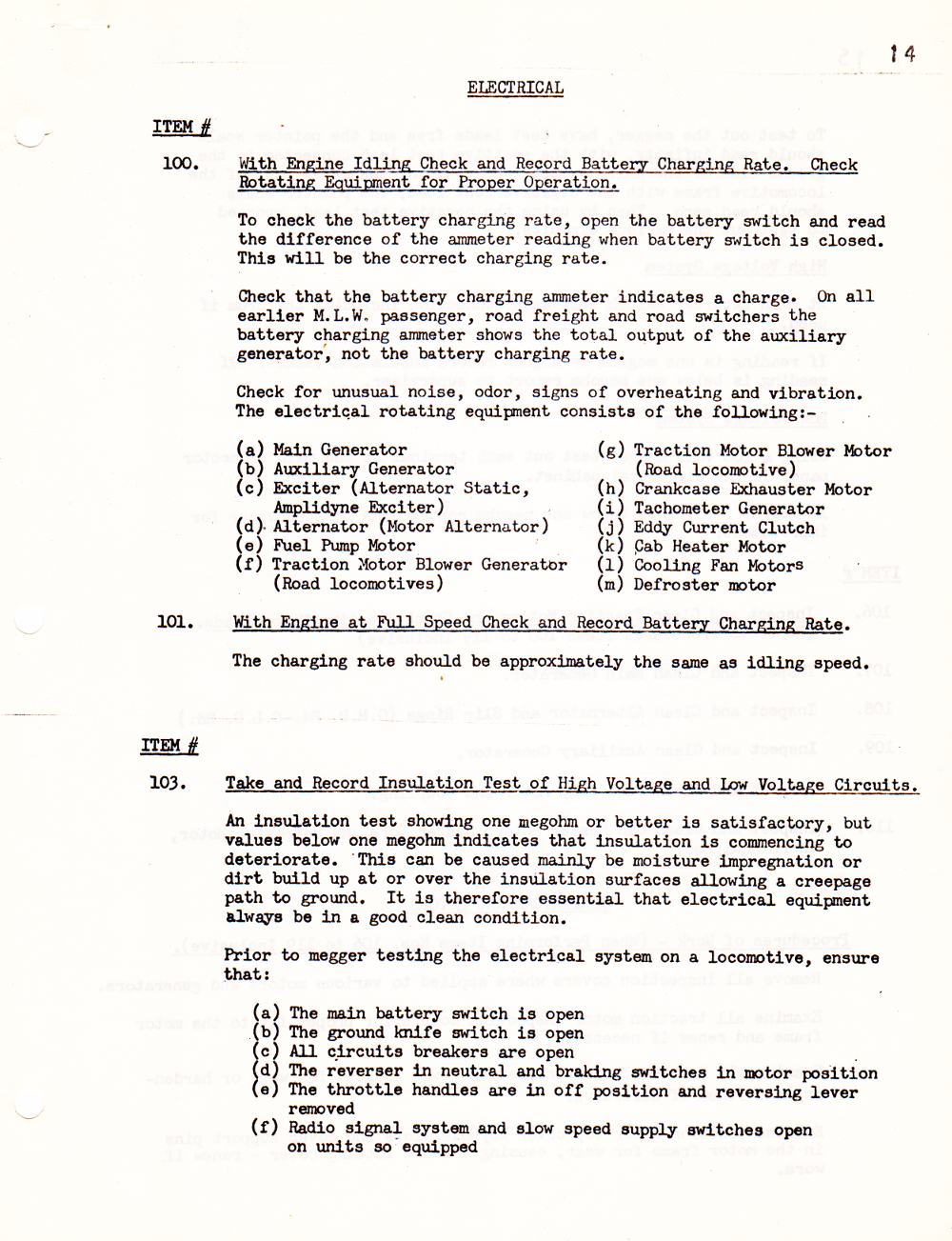 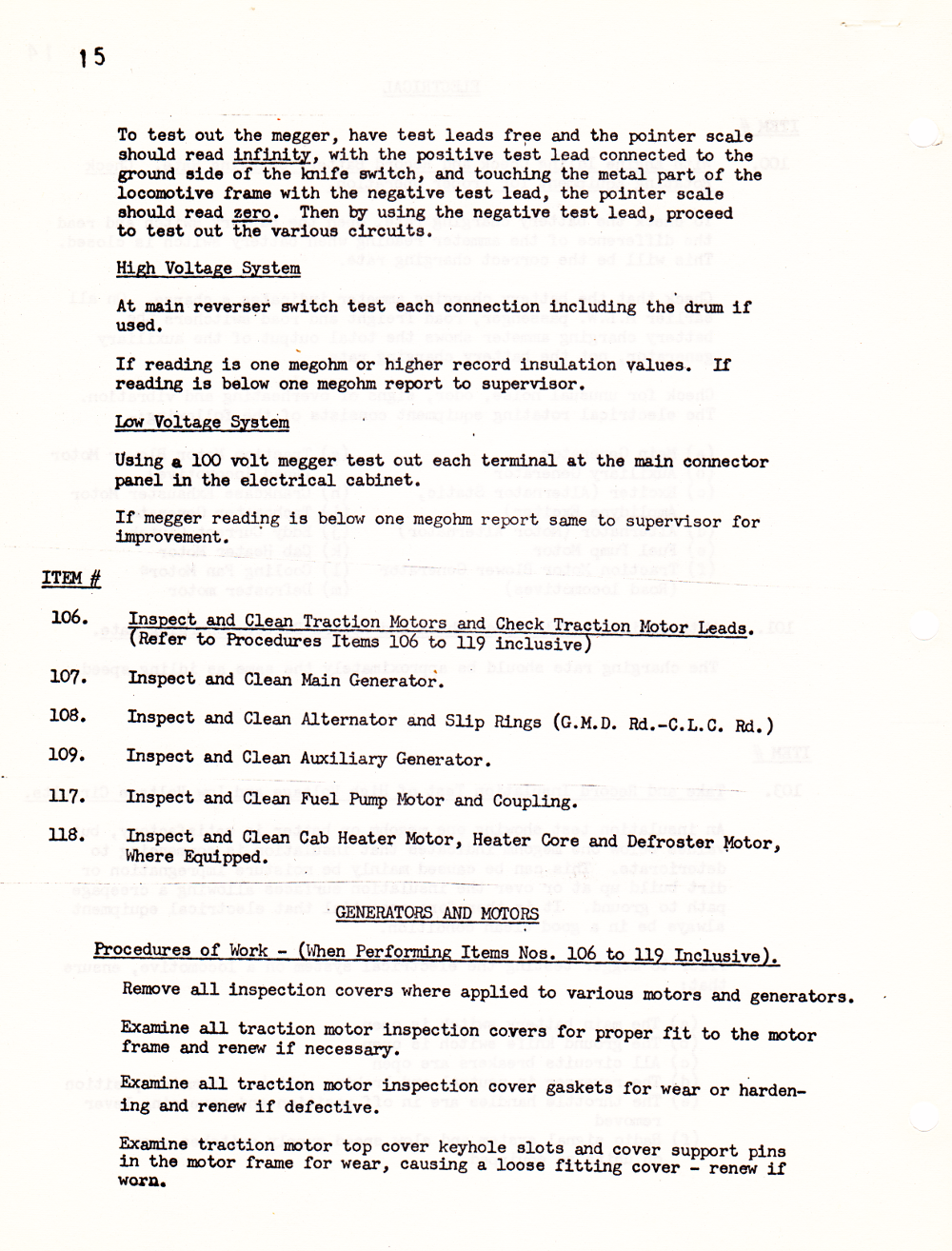 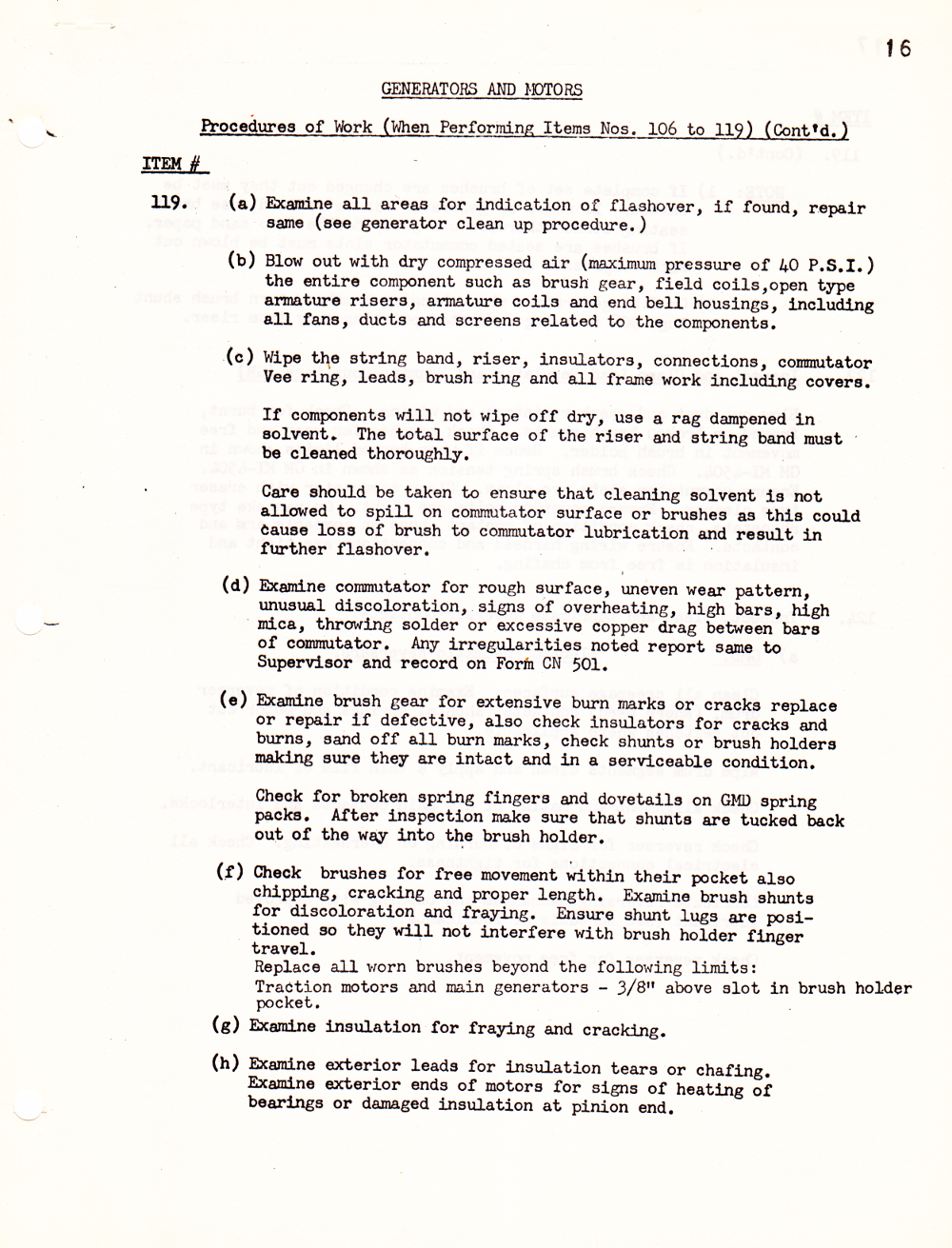 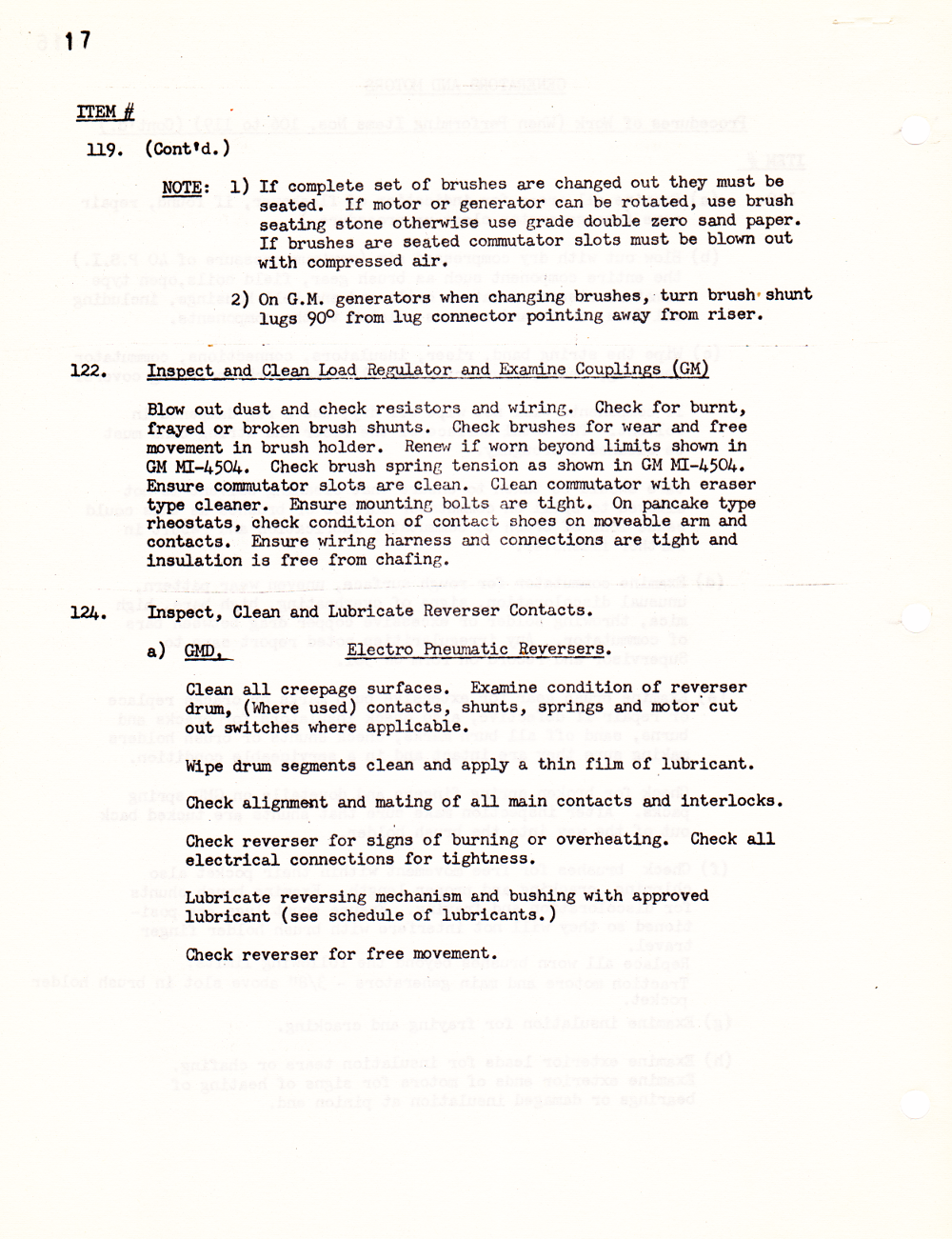 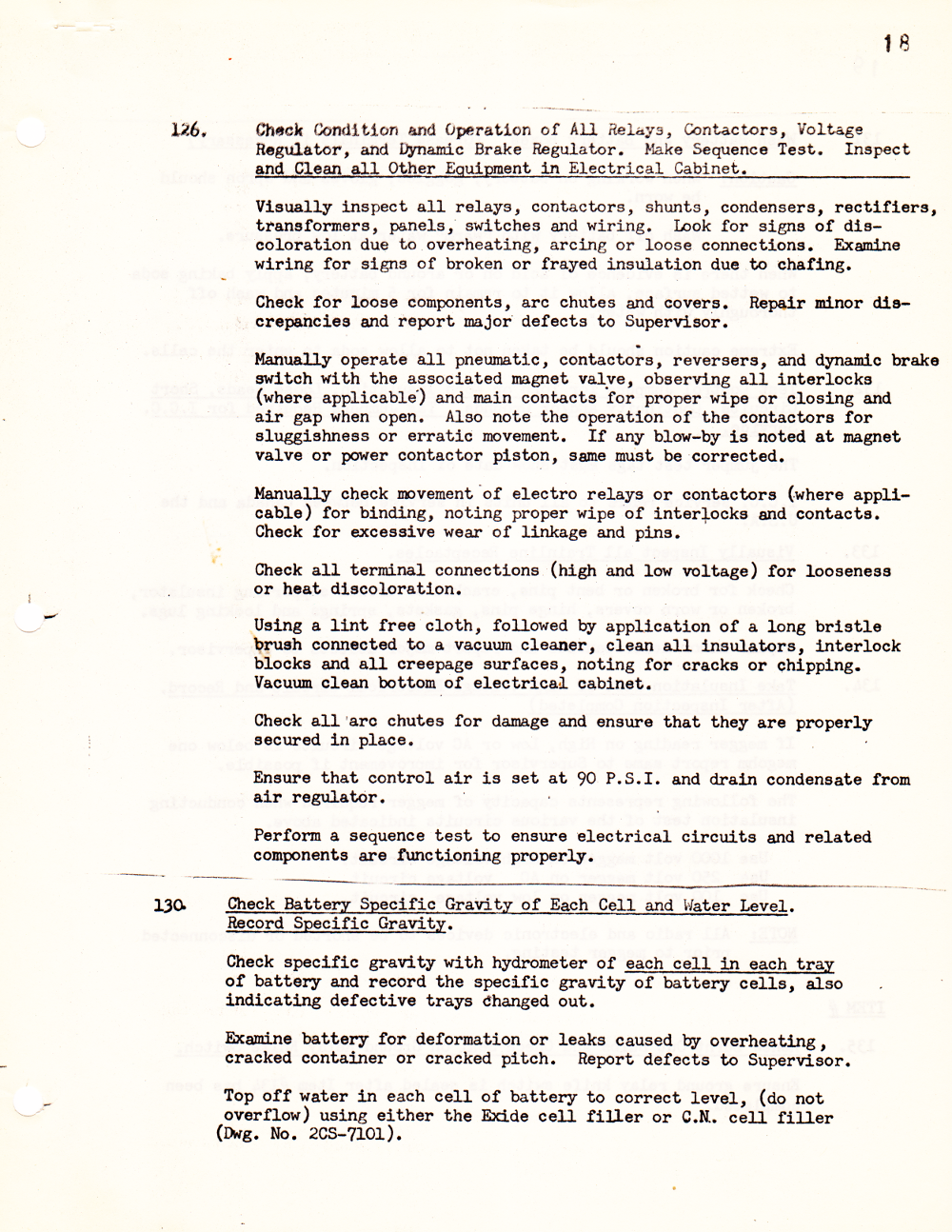