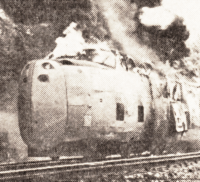 This post presents additional newspaper clippings my father filed about the Turbo train.
They span the period from 1974 to the Turbo's retirement in late 1982. The captions aren't matched with the correct photos.


This series on the Turbo train began because I wanted to get this artifact (below) on the internet so people who are interested in this subject, or those doing research in the future, could have access to it. The title of this post tags the document to make it easier to find.

This rough diagram of the lower level of tracks at Montreal's Central Station may originate from the Turbo's introduction to service, or it may have been produced later ... for example, in 1971, when the train length and configuration was being changed from its original. I have introduced it at this point because the article above mentions the United Aircraft of Canada employees working at this location.

I bought this diagram a number of years ago at the Kingston railway show. The vendor (I suspect, the original owner) had gone to the extent of producing an interpretive 'label' in the form of a sheet of paper with computer printer images of both Central Station and the Turbo on it. I assured him the diagram was going to a good home, and with this posting it is - yours.

The original is on heavy tracing paper which has become dark brown with age. The drawing and writing has been done with various sizes of black felt-tipped markers. The overall size is the equivalent of 4 sheets of 8x11 paper laid side-by-side.

This software platform often frustrates my attempts to post larger items in sufficient detail that readers can read or download them. In all cases below, you will need to scroll to the right to see the entire document. It took a number of tries to find a size and format which made the document useful to readers.

The first image shows the entire document as an overview.

Then, the following two images show two halves of it in sufficient detail so you can read all the written characters. The word 'SOUTH' is duplicated on both halves to serve as an anchor - if you want to stitch them back together. 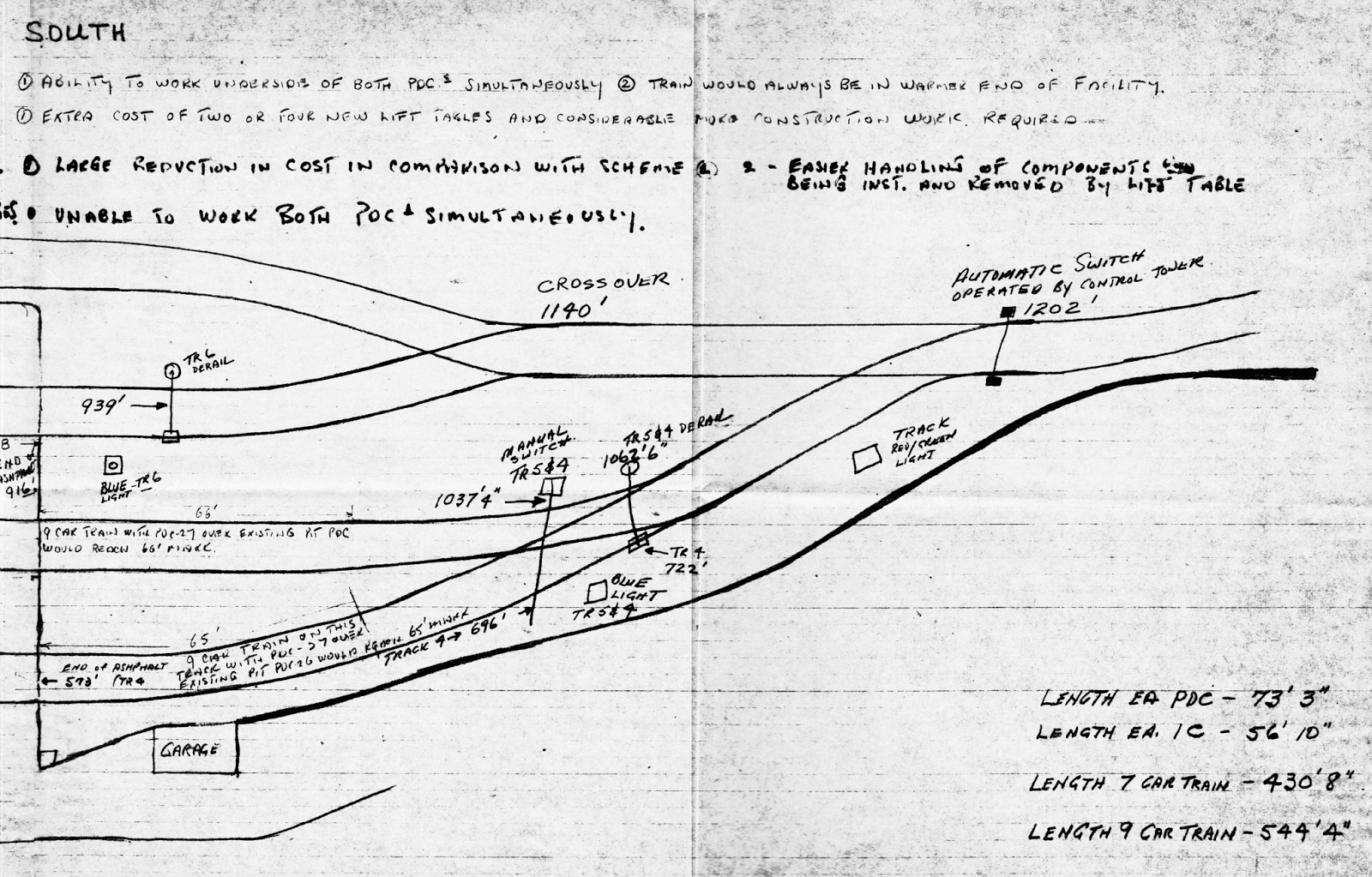 
There is a significant gap of a few years in my father's clipping file on the Turbo - maybe everyone got tired of reading about it. The last article (March 1972) in a previous post foretold of a Turbo return in early 1973.

I have left out a Toronto Star clipping from June 23, 1973. This pits the speed of a Turbo trip against an Air Canada flight - using downtown Toronto and downtown Montreal as the travel points. The reporter took the Turbo east and Air Canada west, back to Toronto. Other key points: His flight left Montreal 80 minutes late and he checked his bag on the plane, requiring a delay at the carousel.

' The Terrible Turbo - Canadian National Railways' super-train with a remarkable propensity for breaking down - has made a comeback. '

' Now, almost a year and a half and some 100 modifications later, the Turbo is back '

' However, the [other] Turbo from Montreal to Toronto arrived at Union Station last night 56 minutes late. The lights went off and the air-conditioning failed, giving passengers an unscheduled 35 minute stop at Cornwall. This train made the 337 mile run in 5 hours and 6 minutes with one engine shut down after the Cornwall stop. '

There is a lengthy comparison of leg room, etc, and the food and drink offered.


' [On the reporter's train]: Most complaints centred on the fact that CN has dropped the traditional dining car. [passenger quote]: "It seems to me that this eating at your seat might be efficient but I hate to see the passing of the train dining car. There is something quite elegant about dinner aboard a train. It was the worst thing they could have picked up from the airlines." ' [end of article] 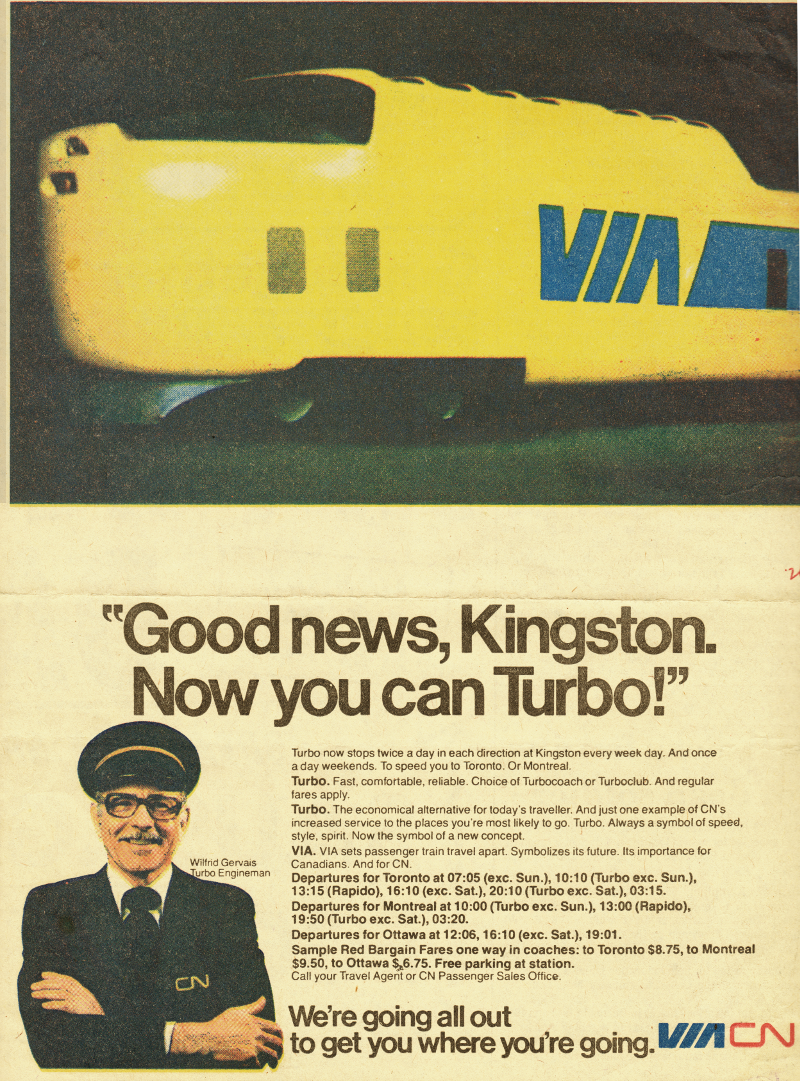 ... That's quite a model of the Turbo you have there!
The jumble of text includes non-Turbo trains.

My first ride on the Turbo was in April or May 1976 - returning from a job interview.
I remembered it as being low to the ground, fast and hard-riding.
And now I wonder if I could have had a train with a dining car. 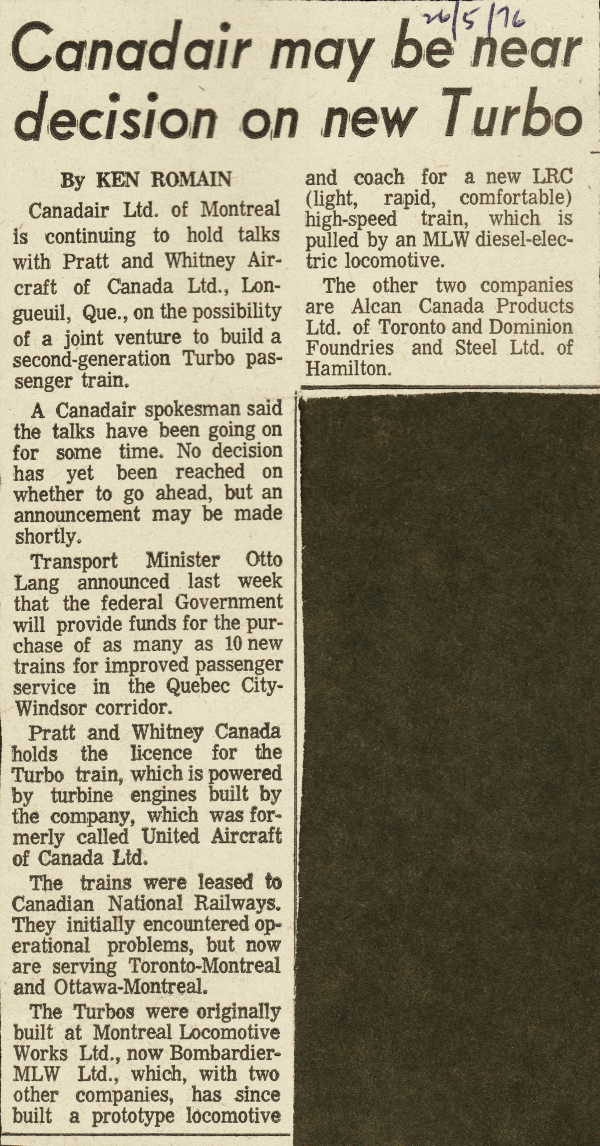 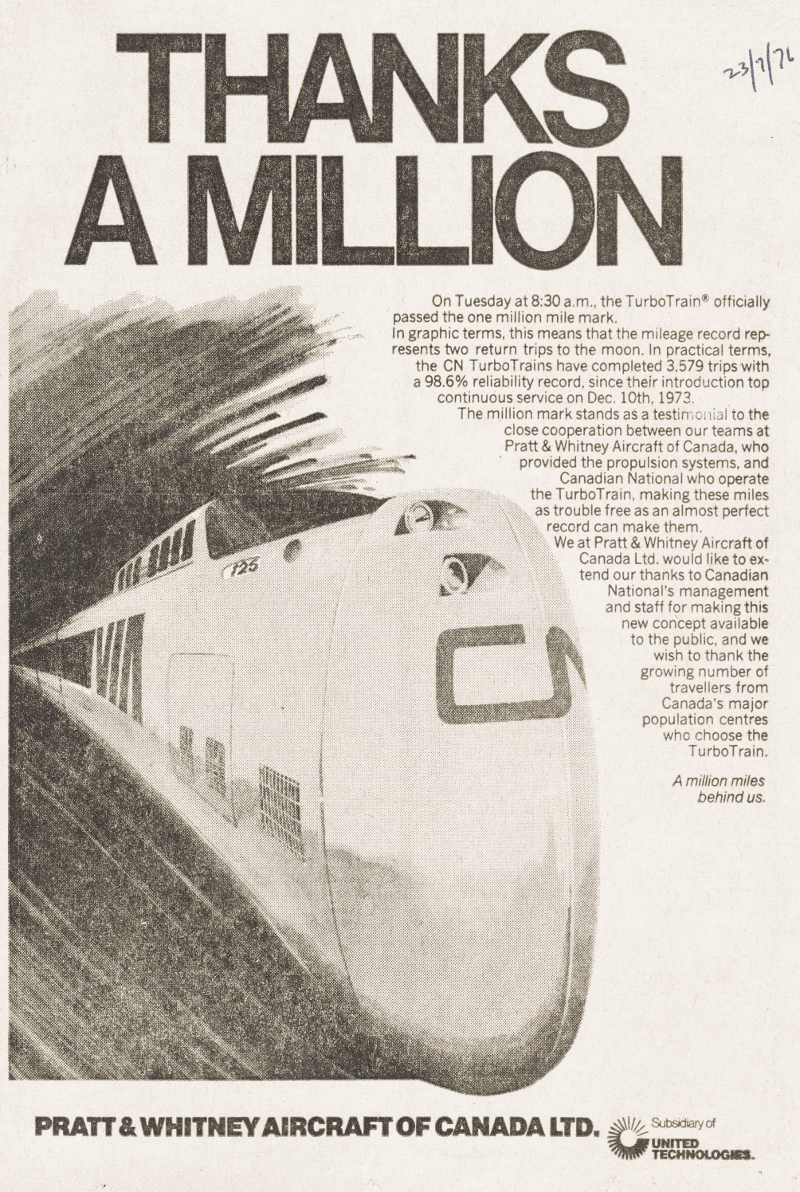 That's quite a drawing of the Turbo you have there!


In case you are not a Turbo fan, here is a brief digression.
It's another distance expression for the public which invokes the moon
from a 1950 Trains magazine.
It seems that almost every aspect of the Turbo had already been 'done' somewhere else before. 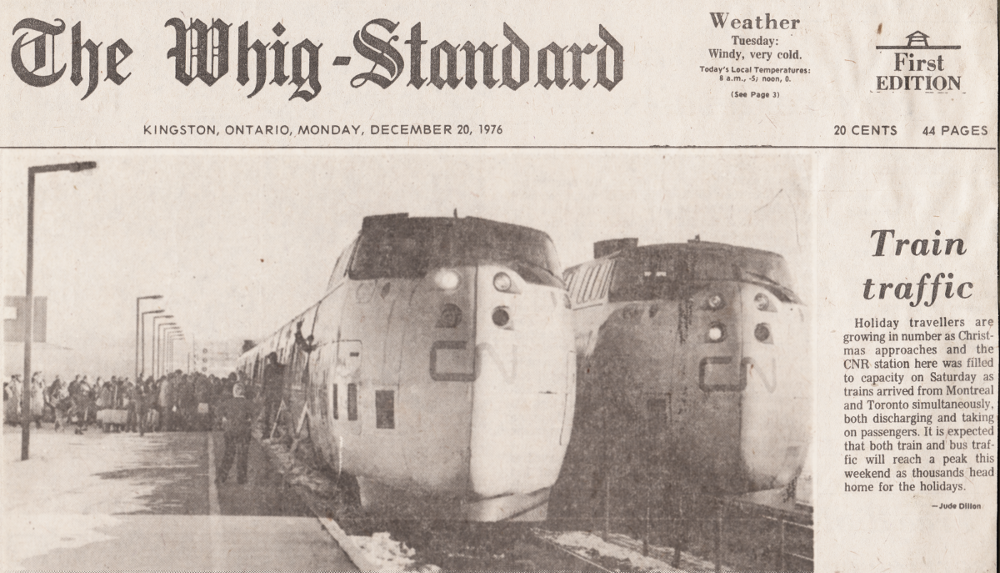 They are like heavily-laden prospectors of the late 1800s, at a northern Ontario flag stop, clambering aboard from the level of the ballast. They are herded in through one door into one car, so they can be supervised. Shack is the conductor today, and no one is going to ride for free!
(cf. Emperor of the North)

You take this exquisitely engineered greyhound of the rails, bank it at high speed through the curves ... but you don't do anything to ameliorate dwell time or 'customer experience'. 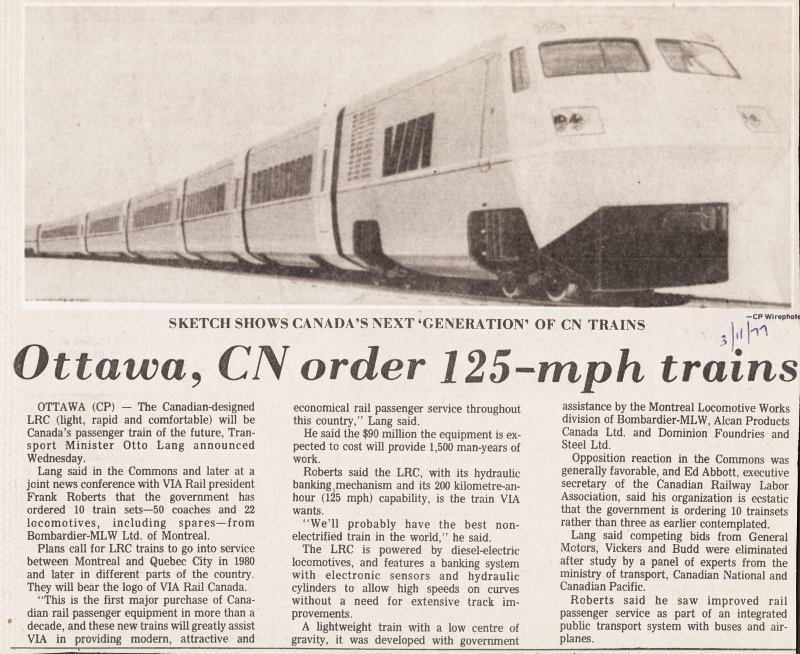 Don't be confused by spin: The 'next generation' is very different from a 'new generation'. 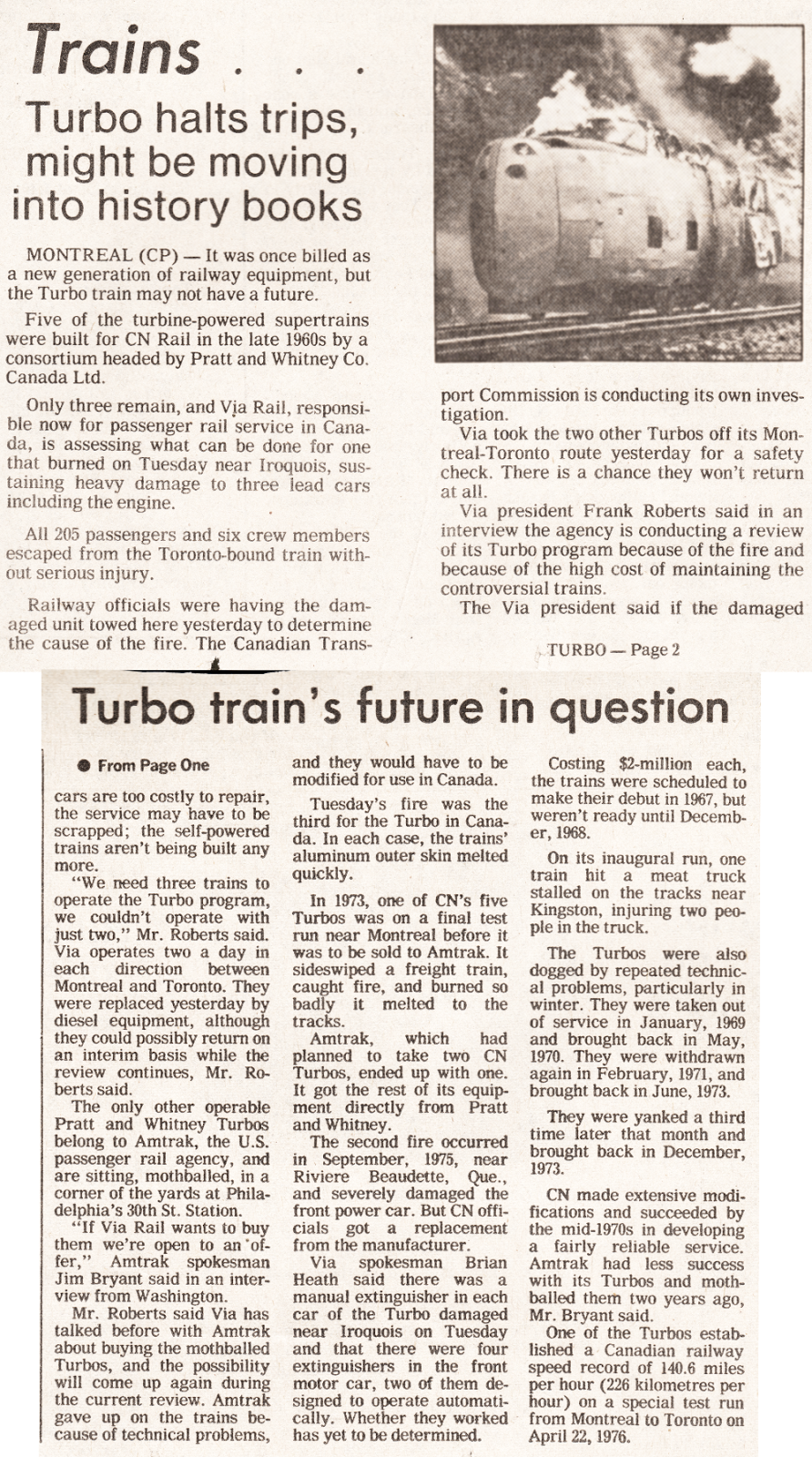 In a later article in another paper, a fuel line leak was speculated to be a possible cause. 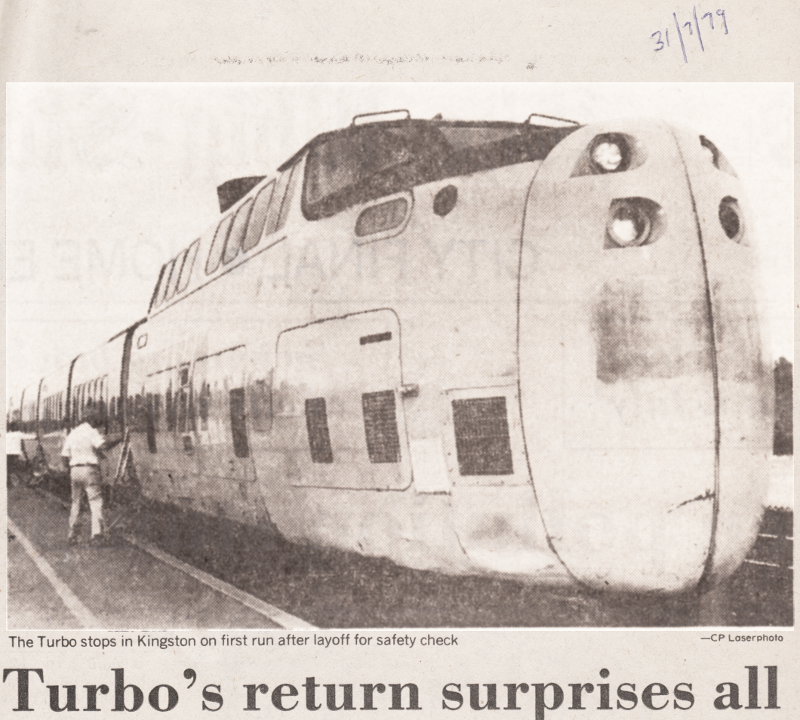 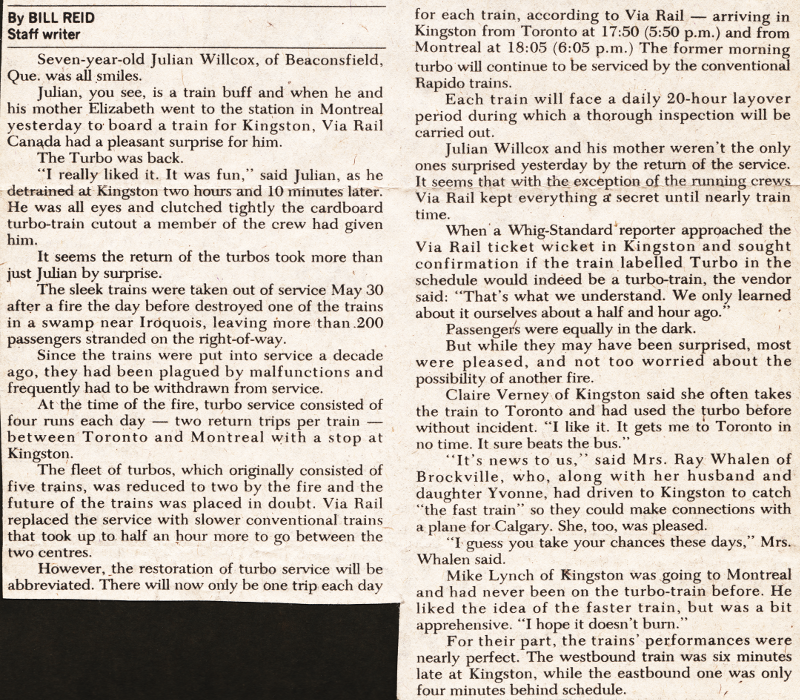 This article was preserved as a photocopy. 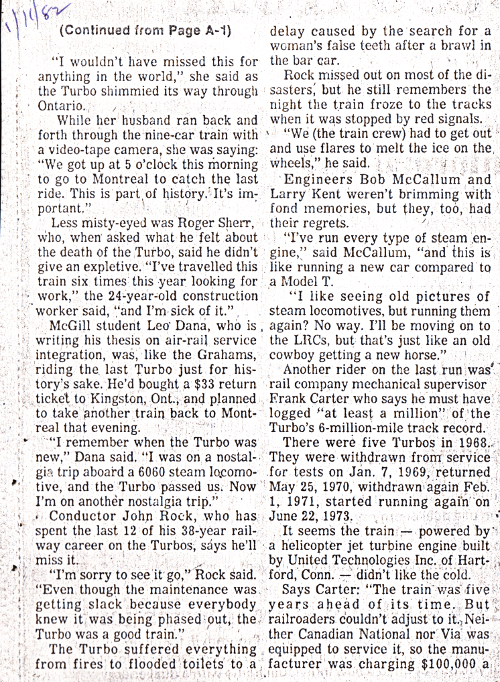 The images below come from the dinnertime arrivals of the Turbos to Kingston. I probably took them in 1982. In the first you can see the tower of Collins Bay Penitentiary in the distance. It was also during this time in VIA history that the Canadian travelled between Montreal and Toronto through Kingston. 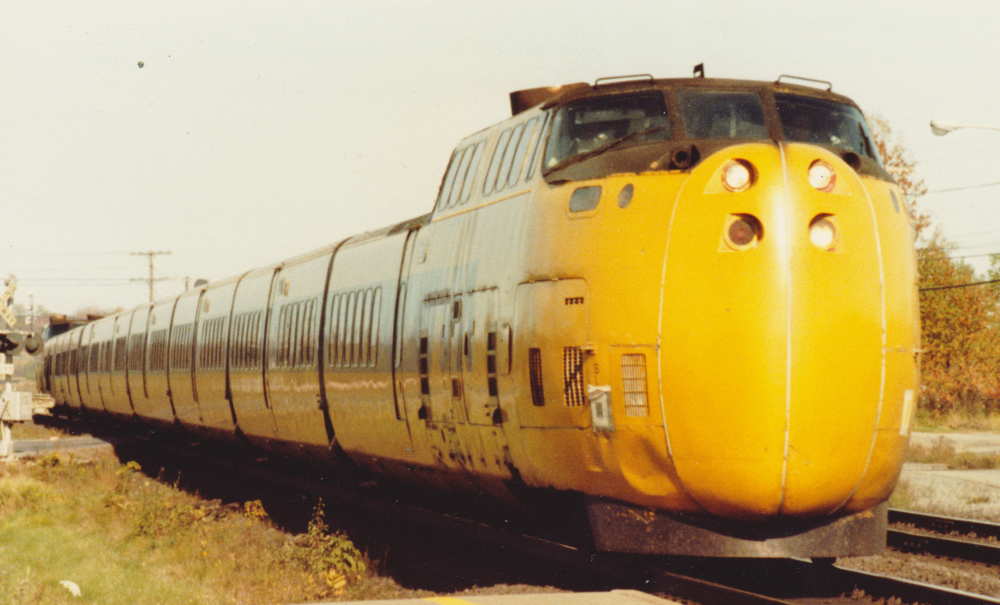 The westbound gets a pull-by inspection by some passengers as it stops at the station. 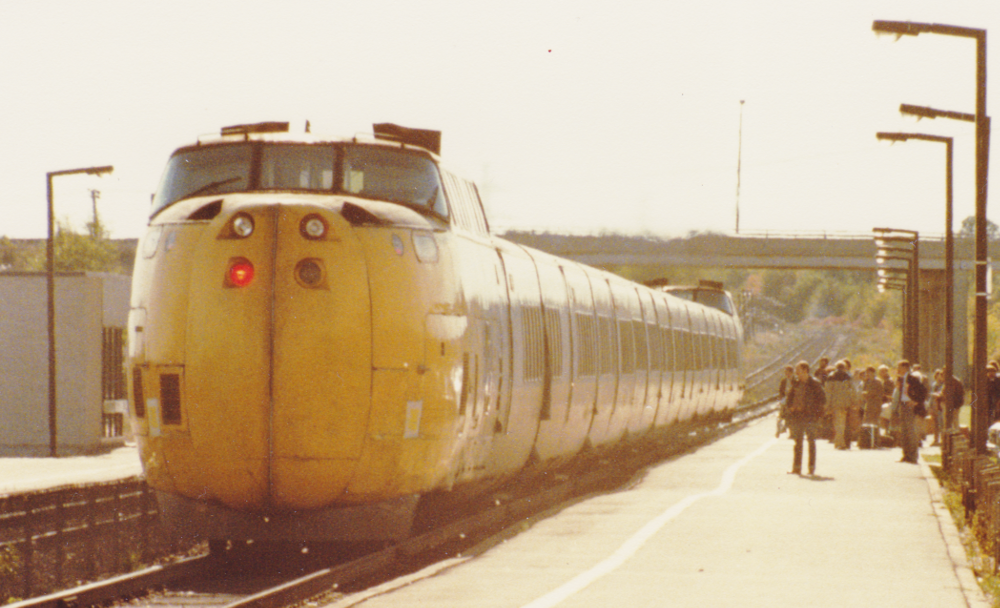 At least one more post will follow with the enthusiastic and optimistic
late-1960s descriptions of the Turbo technology and what it was expected to achieve.