The postcard view above was probably taken sometime shortly after 1900 and hand-coloured. A passenger train is arriving at the station. The railway is not the CPR, but the view shows the wooden construction used in freight cars and the varieties of equipment then in use.  Although the colouring process obscures them, the roof-mounted brake wheels can be seen in most cases. This is the type of freight equipment which would be transported up and down the Big Hill near Field, British Columbia.

Operating rules and technology on the Big Hill were focused on the critical mission of maintaining passenger train safety above all. However, most of the CPR's revenue through the area would come from the transport of freight. This post looks at the processes and technology used for the safe movement of freight before the opening of the Spiral Tunnels in late 1909. 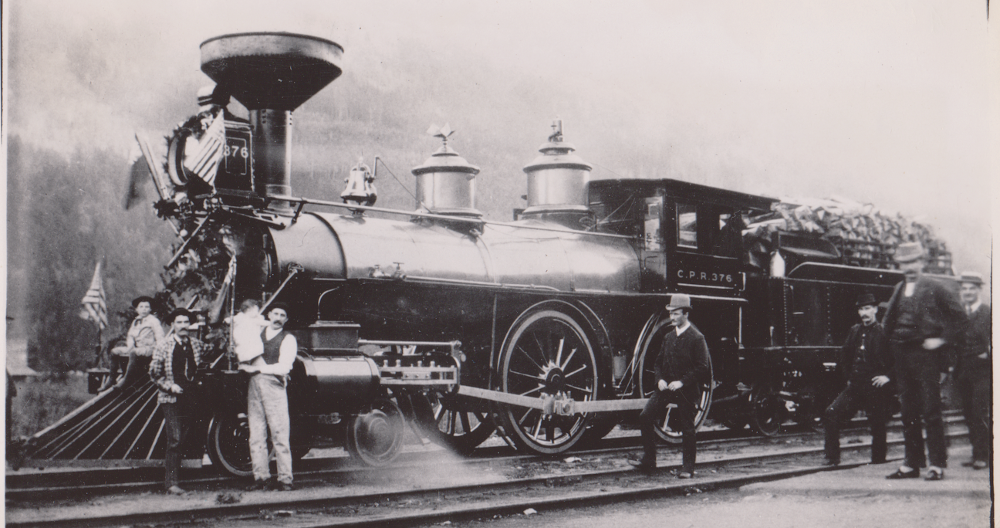 The card to which this print is glued states this is CPR 376 at Field in 1886. One source states that this wheel arrangement was so rare in its use at Field that it doesn't warrant being mentioned. This 'perfect' wheel arrangement of that era can be contrasted with the following power.

A Baldwin-built locomotive which was purchased for Big Hill service is shown above. It was probably photographed around 1890. The oil headlight and the fact that the locomotive has two sand domes are interesting details. One source remarked that the wooden pilot was handy because if a rockfall was struck, any locomotive entanglement could be resolved with an axe - rather than causing a longer delay on the road with a bent metal pilot fouling the track.

This locomotive is fitted with air brakes, which came into use after traffic had started operating on the Big Hill. The steam-operated air pump is just in front of the cab, with the main reservoir located under the engineer's position in the cab.

Earlier in Big Hill history, individual car handbrakes (only) had been used to control train speed - in conjunction with any braking technology available on the locomotives ... such as manual tender brakes, straight air brakes on the drivers and/or using the locomotive reverser (steam cutoff). There is no definitive source which chronicles exactly when particular technological advances were made on the Hill, partly because it was a gradual process with the railway using its usual method of derating and downgrading older equipment for less demanding service as better equipment became available.

On the theme of getting along with imperfect technology ... it was a normal practice of the time that cars with air brakes would be marshaled behind an air brake-equipped locomotive so a continuous trainline, operated by the engineer leading, could be established ... then the rearmost cars - lacking air brakes - would be controlled with handbrakes.

My interest is in this particular photo stems from the fact that it shows a link and pin coupler system with a link actually in place and ready for use. You can see that the pin has been inserted above and then through the link to hold it in place. To mate with a higher coupler, the other slot could be used.

To couple to a car in front, a trainman would have to position himself between the locomotive and the car ... guide the link into the car's slot by hand, and drop the pin at the precise instant it could capture the link at the car's coupler. If something went wrong, fingers could be lost at the coupler or the trainman could be crushed between the equipment.

... With old photos, we can keep in mind the fact that railway locomotives were used in all weather and lighting conditions - in contrast to the cameras of the age. 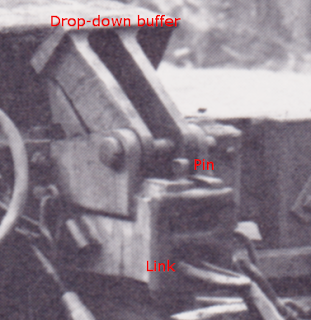 I believe that the device tipped back at a 45 degree angle above the pin is a pushing buffer which could be dropped forward to provide a pushing surface without the complication of coupling the locomotive to the rolling stock being pushed.

Here are a couple of random discoveries to suggest why this route with its troublesome grades was selected over the easier grades of the Yellowhead Pass. Some writers of Canadian history have suggested that it is an enduring mystery why Van Horne et al selected this southern route - over the previously favoured 'Canada Pacific' route used later by the Canadian Northern, Grand Trunk Pacific, and ultimately Canadian National. It is probably not a mystery ...

After finding that curious article, I perhaps found the date of this event:

In Commercial Canada (published c1922), a lavishly illustrated hardcover book which promotes those provinces, cities, industries and companies willing to purchase their own advertorial sections, there is a chronicle of significant dates in Canadian history. For the date April 21, 1891 is the following entry:

The first of the new CPR steamers arrived at Vancouver from Yokohama, beating the record by over two days. The mails were landed in Montreal in three days and 17 hours from Vancouver.

... It seems possible a US railroad/Grand Trunk Railway combination may have had the previous mail contract.

The CPR Syndicate intended to fight for every bit of Empire business they could get, by forming a land and ocean bridge between the Far East and Britain using their own ships and rails. As well, building close to the border via Field tended to make it easier to beat back cross-border advances attempted by JJ Hill's Great Northern Railway or any other American line trying to siphon away Canadian traffic.

While looking for early CPR records in an 1887 edition of the Official Guide, I found two interesting articles about the efforts to select and standardize key safety appliances for use on US railroads.

These same technologies were quickly embraced on the CPR's route down the Big Hill.

Apparently, during this era, there were many manufacturers of the Janney type of coupler. When cars were received through interchange in the US, the receiving railroads were having trouble maintaining the necessary stores of proprietary spare parts to repair Janney-type couplers which failed on these 'borrowed' cars. Eventually, it was expected that spare parts would be interchangeable.

Janney couplers (fundamentally the same as those used today) were not as much 'automatic' as they were 'remote control' ... there was no need to adjust them in any way while equipment was moving. With the link and pin type, an employee had to move between cars when cars were being coupled ... and to uncouple, an employee would often have to wait for slack to remove a pin.


This test data is interesting to read. In contrast with the non-automatic nature of so-called 'automatic couplers' ... Test 7 above reflects the valuable characteristics of the 'automatic air brake'. That is, if a coupler fails and the train separates, the brakes apply to all cars automatically as the train line pressure break initiates the emergency brake application on all cars.


Getting Back to Field


The scale of the country dwarfs the railway operations around Field.

Today the Trans-Canada Highway and most of the traffic are to be found on the left side of this photograph - on the opposite side of the Kicking Horse River flats. When this photograph was taken, only the horse stables used to support local commercial travel and tourist excursions were found opposite the town site on the other side of the river.


A dining hall for passengers was built near the small Field station during the first summer of passenger operations. Mount Stephen House (a CPR hotel) in its final version - seen above - was completed in 1901.

I am repeating the timetable and footnotes section for the CPR 'Mountain Section' here as some details are referred to in the freight train rules which apply to the Big Hill. 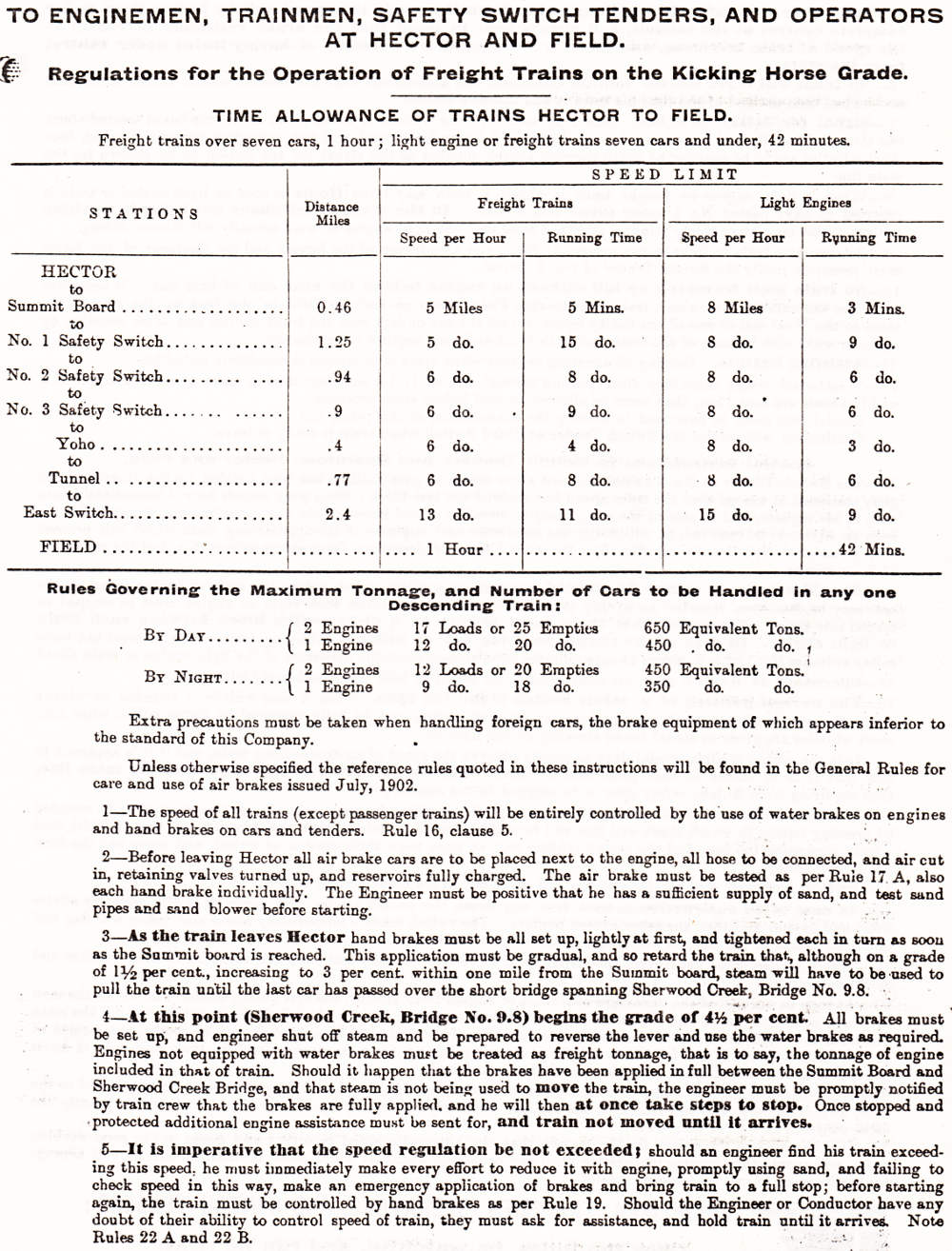 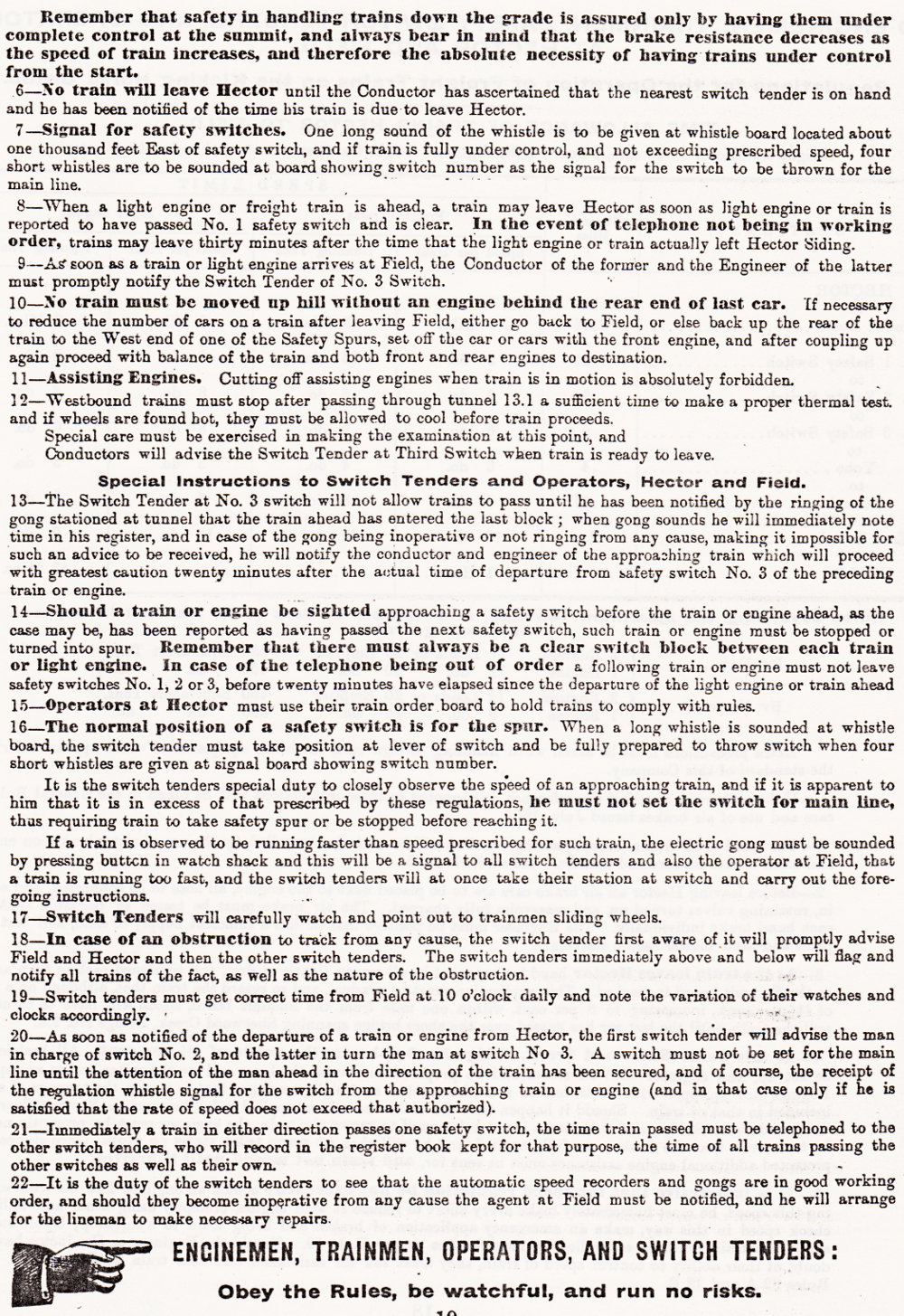 To summarize the rules for descending freight trains: ... When things were functioning normally, each (total: three) section of downhill track guarded by/ending with a (total: three) Safety Switch was a block which could be occupied by a train. But, with the key condition being that: the train ahead must have cleared the next Safety Switch ... before the train following it could pass the Safety Switch being viewed by its headend crew.

... Knowing that a preceding train had cleared the next safety switch downhill, was intended to ensure that any potential runaway was ALWAYS facing its own diverging Safety Switch, with no possibility of hitting the rear of another train.

After the Third Safety Switch, a fourth control point (for freights) was at the 'tunnel in the shoulder of Mount Stephen' (Rule 12: "tunnel 13.1") - the postcard image is repeated below. On the track section beyond the Third Safety Switch, the grade was reduced. It was here that the descending train would stop until its wheels were sufficiently cooled and the shack pictured below was perhaps the location from which the crew would advise the tender of Safety Switch Three that they were departing the area for Field. 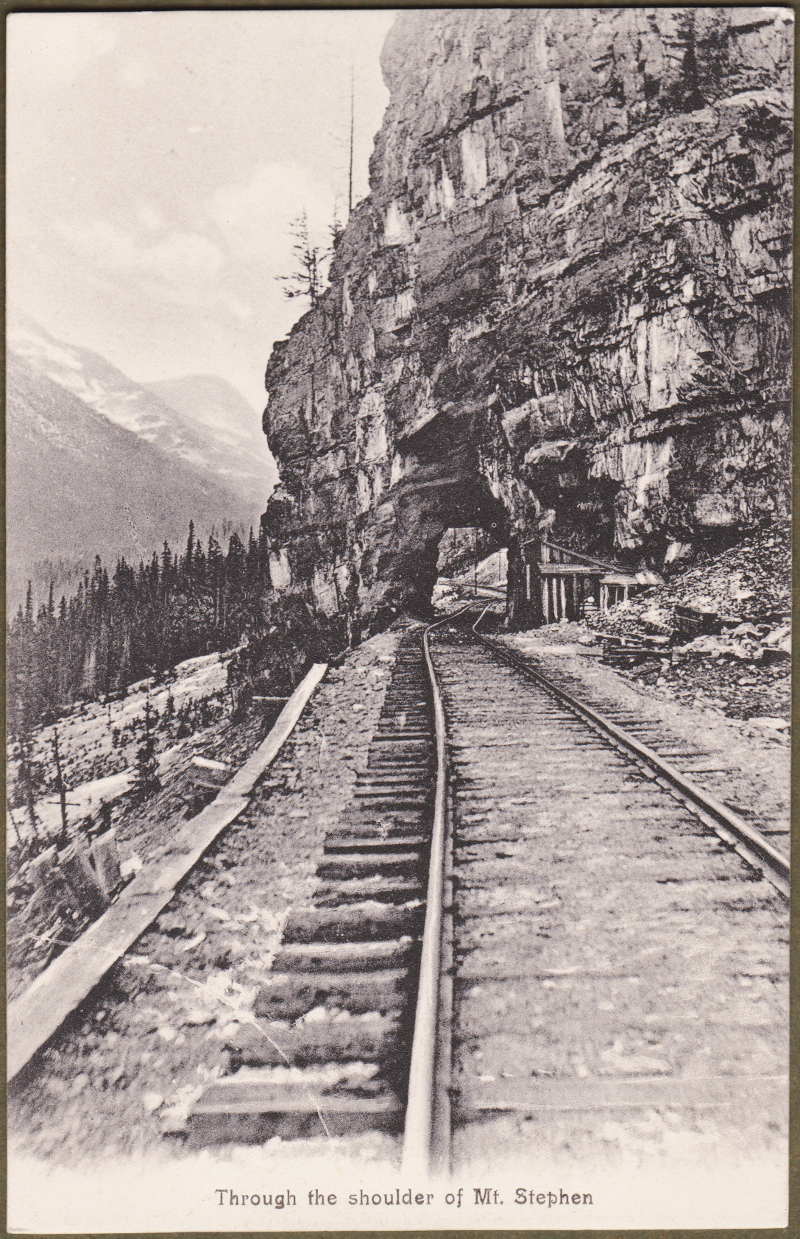 Don't worry too much if you can't decipher this last page ... 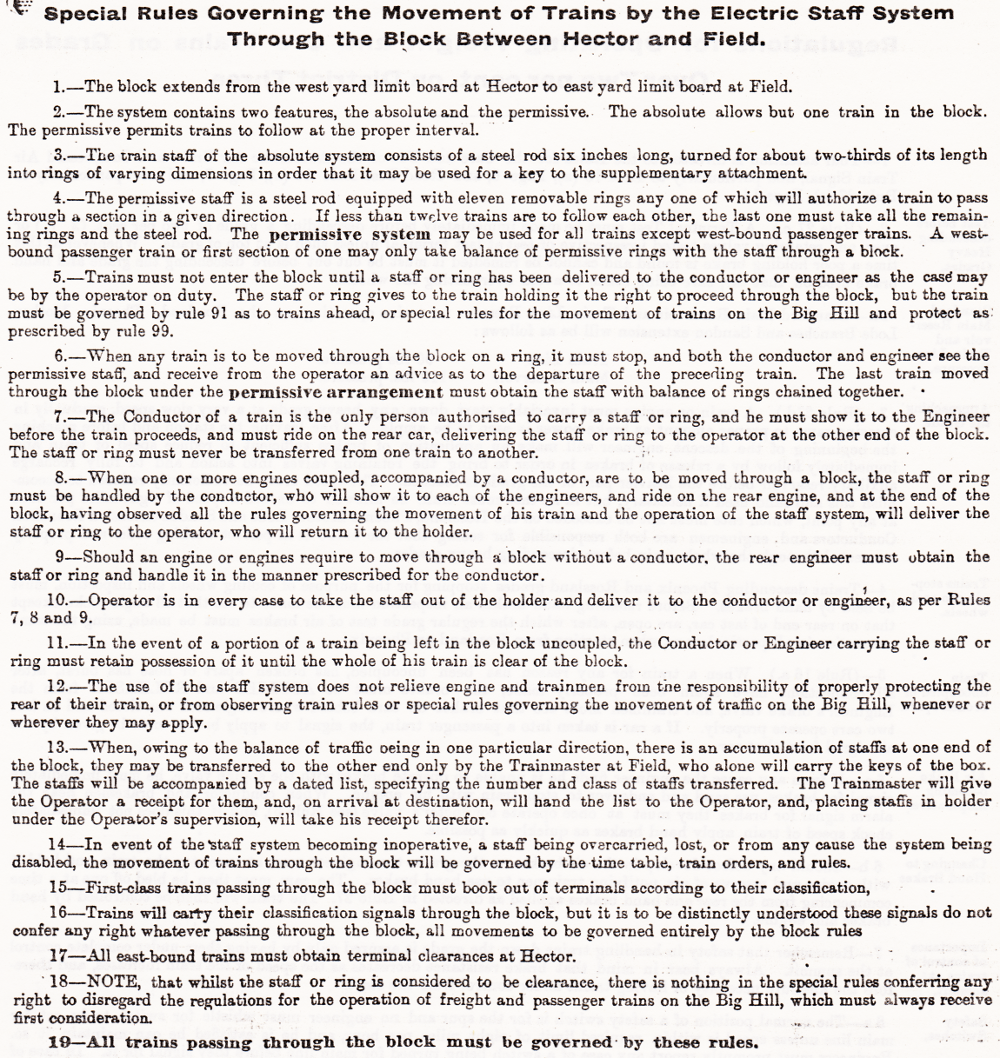 It seems the actual physical characteristics of the staff system will remain a mystery for a while. It does not seem to resemble the staff system put into operation in the Ottawa-Hull area by the CPR around 1915 after a significant collision there (in which my grandfather and his siblings were passengers).

In books published about the Big Hill area - the authors of which having done much more research than I have - the text tends to just quote and/or rephrase the rules above without actually elaborating on how the staff system connected with any electrical receptacles and without providing further details on its operation. ... For workers at Field, the physical characteristics of the staff system would be seen before individual workers would require the necessary fluency with its rules above, and before they assumed responsibility for operating it. Working backwards from historical procedures with no artifact or diagram can lead to dead ends.

In Special Rule 5 above: Rule 91 in the Standard Code of 1902 requires 5 minutes between freight trains.

In Special Rule 18, the formal 'Kicking Horse Grade' of the title is obligingly referred to as the Big Hill.

The following article, published in the 1920s, harkens back to events which occurred during the era of the 4.5% grade of the Big Hill. 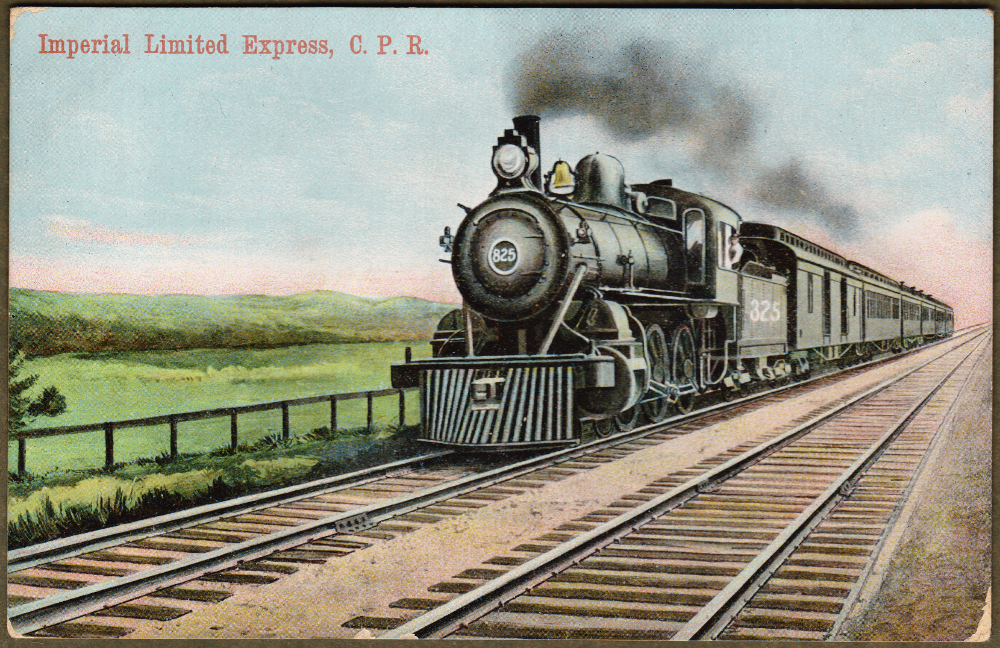 The undated image above was printed by a Montreal postcard company. A couple of days after posting this, I was visiting a local bookstore. In a recently published 'coffee table book' I happened to find the original black and white image from which the postcard was painted. The unmatched road numbers on the number plate and tender don't match the actual number plate in the original photo. 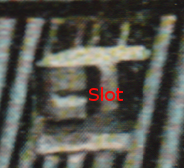 In the Janney-type coupler knuckle on the engine's pilot, you'll notice an adaptation of new technology to accept the old. The slot in the coupler knuckle could receive an old-fashioned link and a pin could be dropped into the knuckle to secure it.

While the coming and going of passenger train names, consists, technology and schedules was celebrated in advertising, postcards and newspaper articles, scant attention was paid to the scheduled freight trains running on the Big Hill: Number 71, the Coast Freight, and Number 72, the Seaboard Freight.

... So here, without even a Whymper, ends a partial interpretation of the technology and processes used in freight service on the Big Hill.