CPR 1943 - Instructions for the Care of Journal Boxes

Tribute to an Artifact

Today's old railway paper artifacts were often used by employees, in the filthy urban corridors, which had cultured themselves along the first pair of rolled iron or steel rails connecting Canadian towns and cities ...

Steam motive power rained lubricating oil and coal cinders from above, while passengers' toilets misted below. Everything from grain chaff, to cattle manure and bedding, to journal oil and coal dust fell down from somewhere in between ... onto the 20th Century substrate of smelter slag and creosote below.

If a company booklet survived in someone's overalls or grip for a year or more, the particular contaminants from that little ecosystem would be absorbed by the paper fibres as well.

Then, in the bottom of a box, in the lowest level of a house, where condensation and fugitive water from defective plumbing or a leaky foundation would accumulate ... a younger generation might find 'some old train books which might be worth something'.

The fragrant boxful would be sold to a dealer as a lot. The dealer would price each artifact and package it in plastic to seal in its historical goodness.

When you are buying ... this is a book which you prefer to judge by its cover.

Whether they are worthless or priceless, it's probably good to distribute, via the internet, elements of these venerable items because some must be relatively uncommon in libraries today. 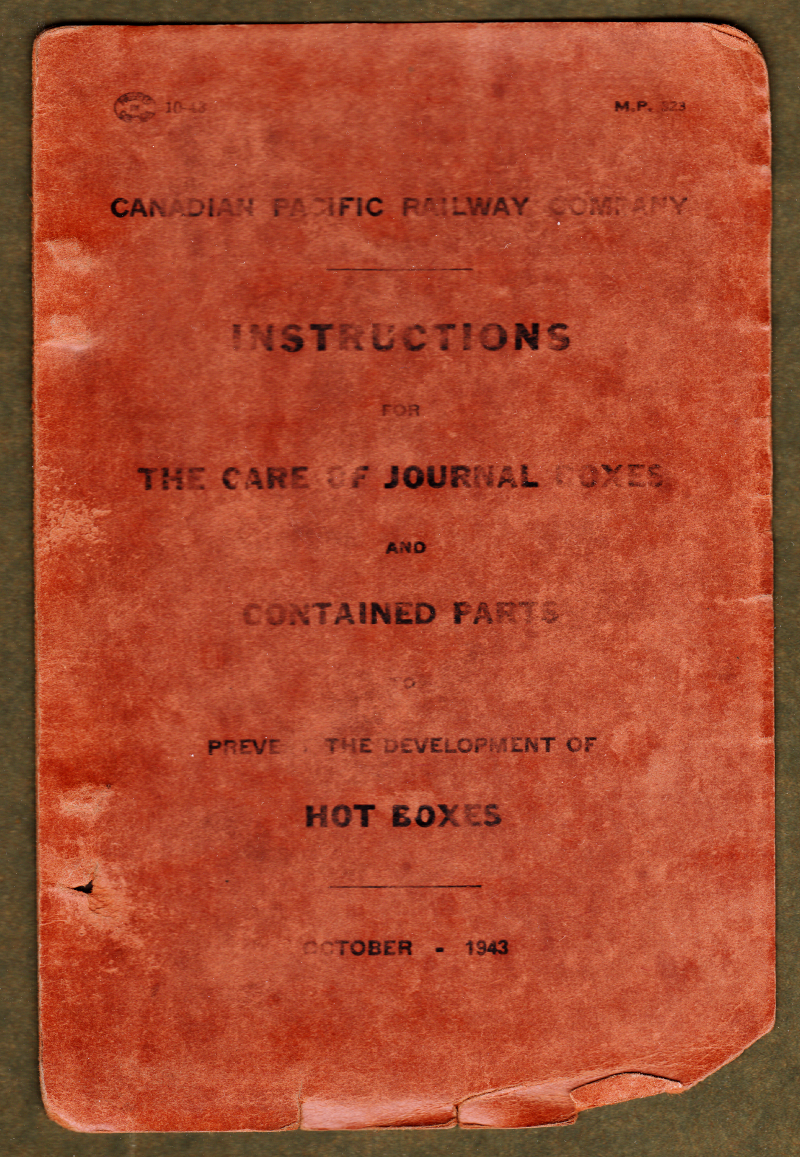 When this booklet was issued, the Soviets were grinding down Hitler's armies as their long, grim westward advance was underway. The 'second front' for which Stalin had been begging was being planned by Churchill and Roosevelt. The British and American air forces were getting the hang of bombing Germany by night and day, respectively. The U-boats were beginning to lose the Battle of the Atlantic. In the Pacific, Americans were learning how to 'island hop' - landing on one murderous beach after another.

Millions of people had already died.

At this point, Canada was particularly important as an exporting country as our agricultural and mineral products were in great demand. These bulk commodities travelled by rail and ship. Railway shops and their employees were diverted into war service to manufacture products such as tanks and guns - with the hope that all this concentrated effort and sacrifice would reach Europe - rather than the bottom of the Atlantic.

Some experienced railway workers had already volunteered for overseas military service ... just try and stop them. The normal quality and quantity of supplies for railway operations were affected by wartime's competing demands. Freight and passenger traffic volumes had blown the Y-axis off those graphed during the Great Depression, exposing a wide assortment of railway system deficits to be overcome. In 1938, the CPR 'revenue freight hauled' statistic was 12.1 billion ton-miles ... in 1943 this had grown to 24.9 billion ton-miles.

The CPR issued this special 30 page booklet so these deficits wouldn't get worse. 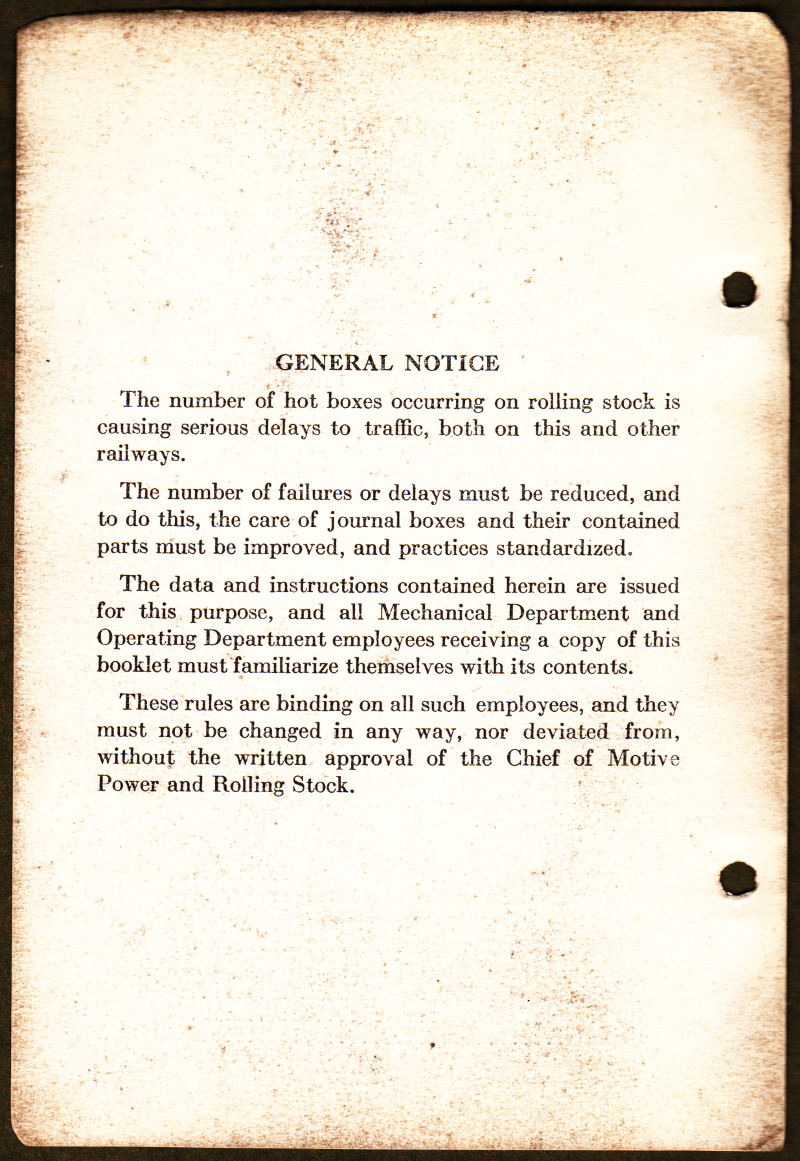 Predictably, some of the booklet is very technical, very concerned about which railway company will be billed for what, and prescriptive on how data will be submitted on which forms. We'll leave those joyless details for any surviving railway corporate historians to interpret for their Boards.

While none of us will ever develop into World War Two-era CPR operating employees by reading this, the booklet does give us some idea of how easily-created and how disruptive hotboxes could be. As background, an earlier post looked at what goes where in a journal box ...

If you consider:
... then a freight train had 240 to 800 individual journal 'oil film generating systems' which could fail and cause an overheated journal.

And if you accept the idea there were at least ten types of system faults which could interfere with that thin uniform layer of oil between the bearing and the journal ... there were roughly 2400 to 8000 possible sources of 'oil film failure' just waiting to cause a hotbox and to delay a train ... as the van gently rocked its way over the last yard switch and the train's journey began.

Passenger trains - which were generally allowed to travel at higher speeds than freights - faced their own consequences from a hotbox ...

A sudden, undetected journal oil film failure could result in a shocking outcome. 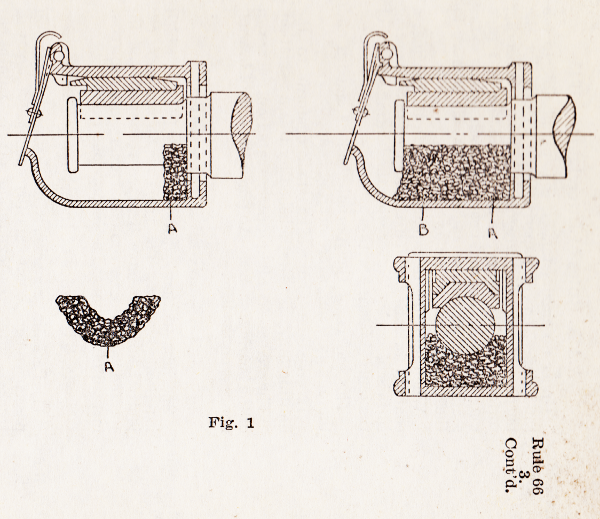 This figure is rotated and reproduced from below. 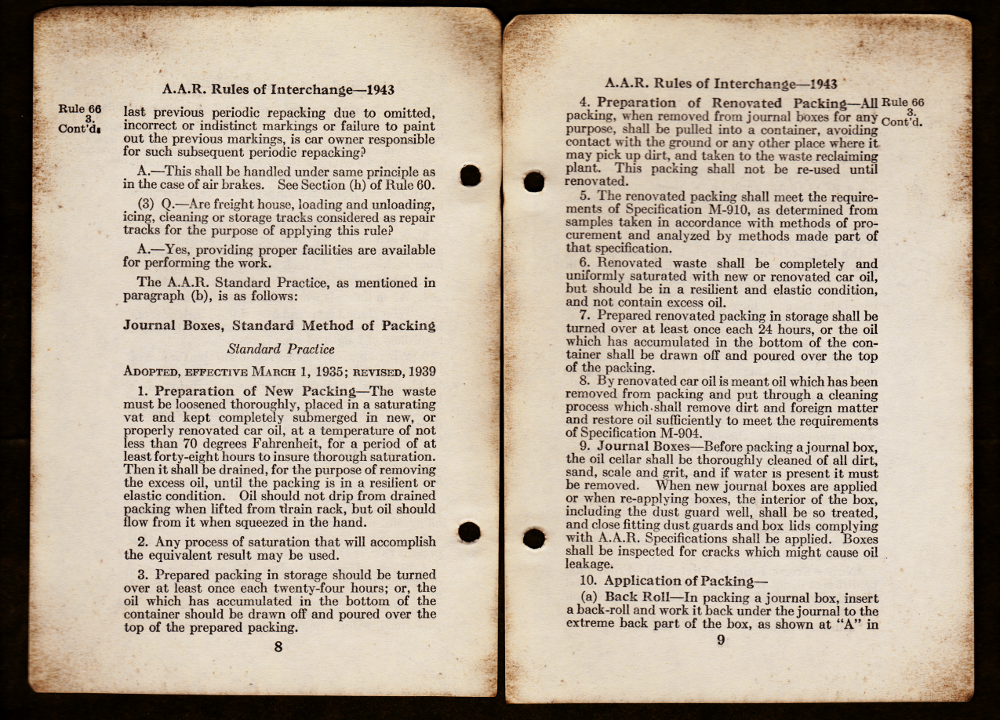 Instead of using a standard manufactured fabric component to continuously apply oil from the oil cellar to the journal, pieces of 'waste' were used as packing. This cotton waste was also later cleaned and recycled.

The booklet later states (not included in this post):

'War conditions have necessitated the modification of the requirements of this specification so that at present, the new waste being supplied consists of approximately 35% wool and 65% cotton.'

... Wool fibres had a greater tendency to stick to the journals and to enter the load area between journal and bearing. 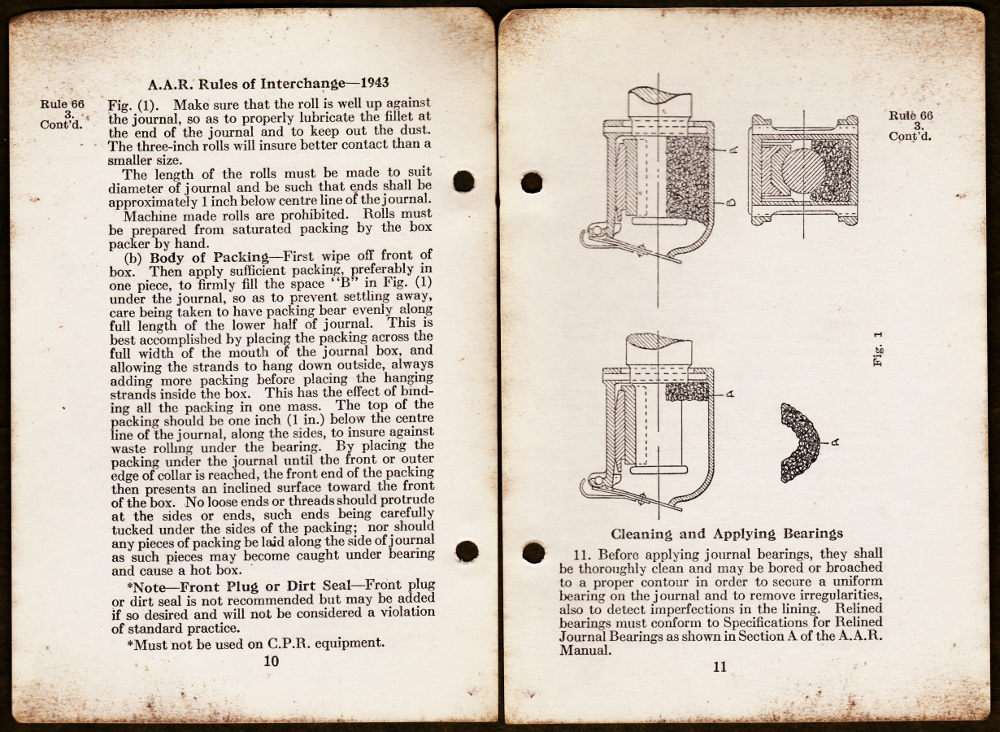 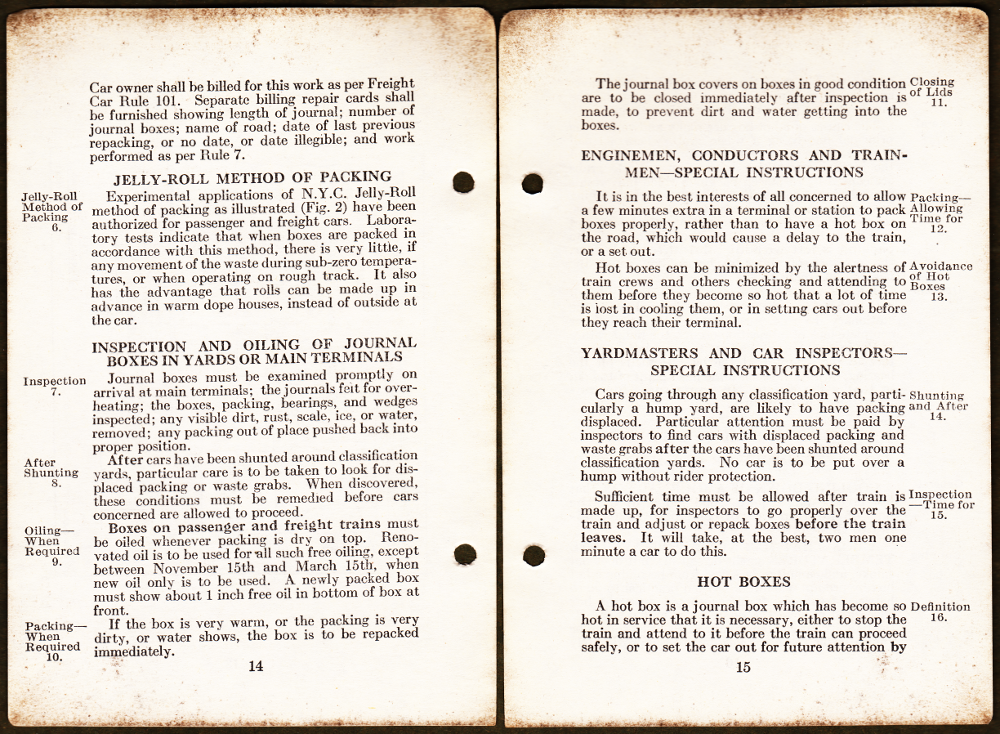 15. Inspection time ... 'two men, one minute per car' ... would be one journal box inspected every 15 seconds for you students of Taylorism.

'The term "waste grab" often leads to wrong conclusions because the word "grab" indicates to many a considerable volume of waste, while in reality, most hot boxes, except in cold weather, are caused by grabs where the volume of waste is not readily observable.' (my emphasis) 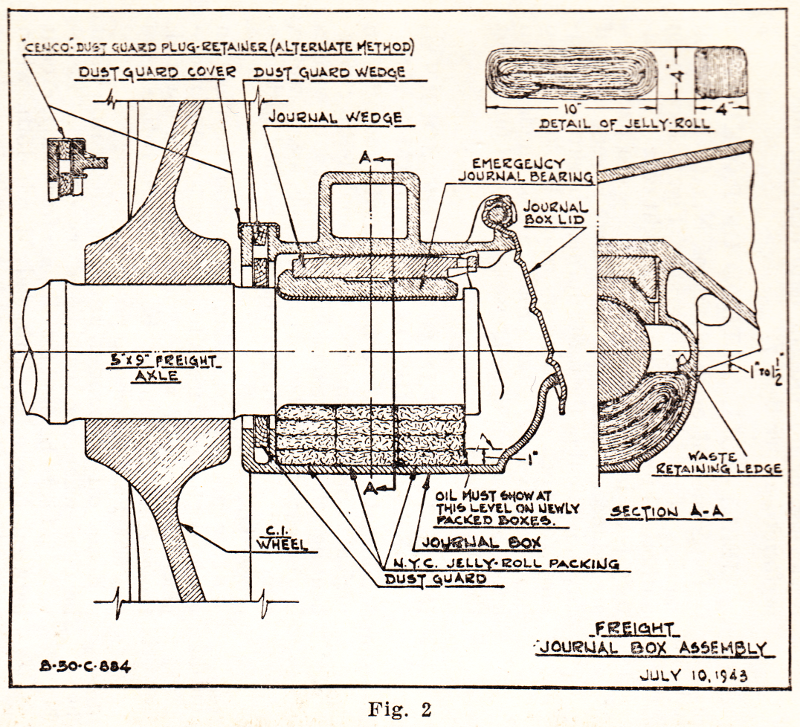 The Jelly Roll packing from Page 14, above. 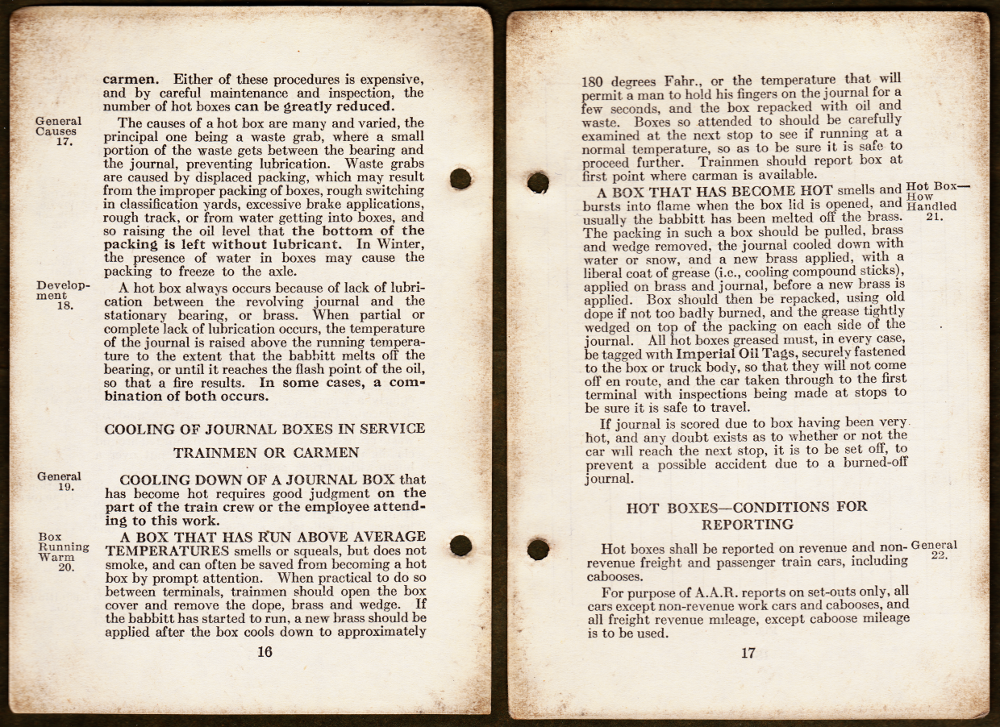 Journal box care was central to the 'human experience' of 1940s railroading.