Canada's wartime 'Minister of Everything' in 1943 -
at the wheel of the 500,000th Canadian vehicle for the war effort.

Yet another of 'The Official Handbook of Present Conditions and Recent Progress' provides the illustrations for this post. Here is the Foreward from someone whose name you might recognize ...

The 'Canada' Handbook Series was initiated in 1930 to supplement the field of the Canada Year Book by offering to teachers and pupils in the public schools and to Canadian citizens generally a brief and attractive record of current economic conditions at a price within the reach of all. The Year Book is primarily a detailed reference work and is not designed to meet the need for a popular medium of this kind.

The past two decades have seen expansion of the national economy in every direction and, since a considerable proportion of space in the Handbook is allocated to illustrations, the editorial task of giving a well-balanced presentation in a publication of this size and at low cost becomes more difficult each year. Currently many thousands of copies are being distributed abroad through our Diplomatic and Trade Commissioner Services and it is desirable for this reason alone that the Canadian economy should be explained fairly completely.

These Handbooks have plenty of industry-donated photos with just a few tables of numbers. They are paperbacks and less than an inch thick. 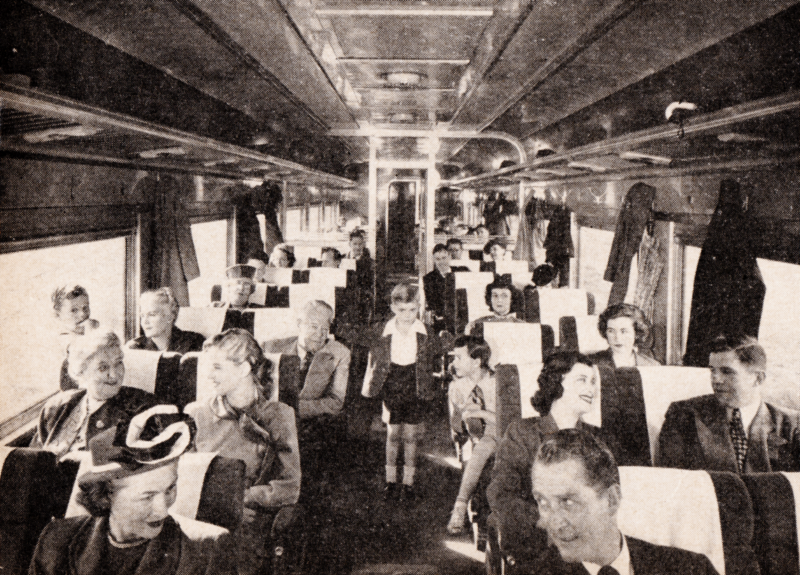 This book was published so long ago, that the boy standing in the aisle probably retired just after the turn of the century. Many intercity passenger trains would soon be going out of style in the US and Canada. You can see the smoking/non-smoking sections partitioned by glass. This is described as an 'air-conditioned day coach'.
*  *  * 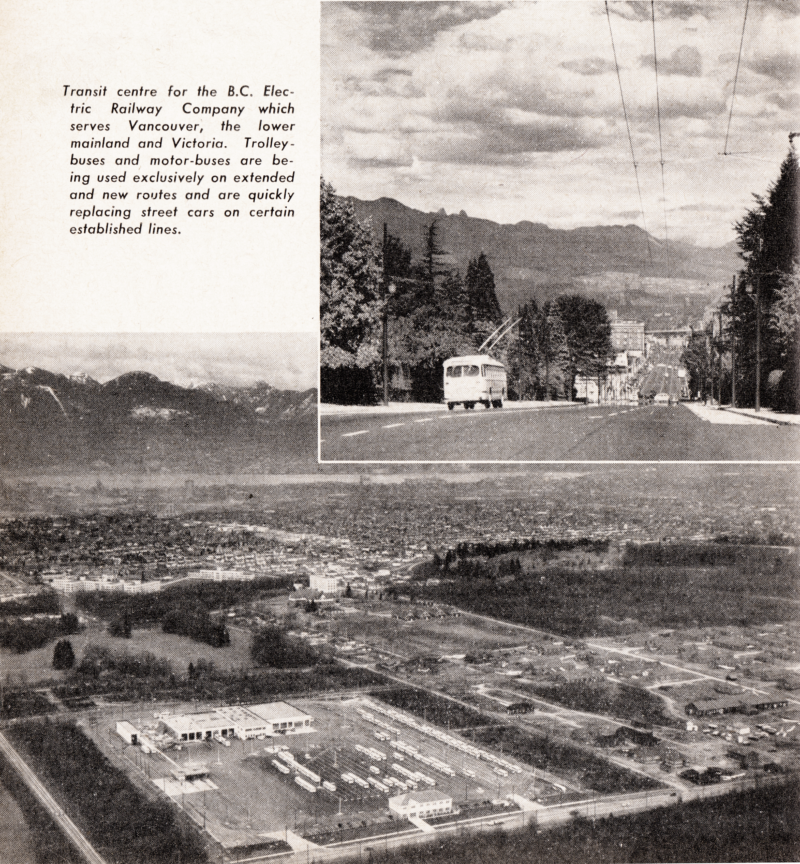 Trolley buses were perhaps a compromise between the tried and true street railways and the new Brill, Mac, CC&F and GM diesel buses. As a kid I rode on trolley buses in Montreal and Vancouver a few times, and they were very quiet and emitted no exhaust. They had exceptional acceleration.

The diesel bus salespeople will tell the transit authorities that diesels can be dispatched anywhere to meet new needs and that they don't need expensive catenary. 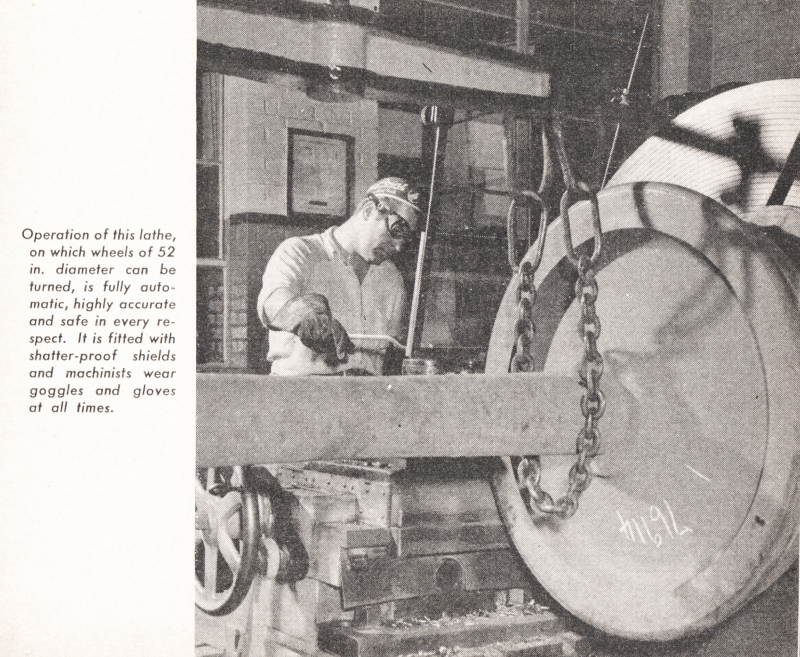 This may be a CPR boxcar wheelset getting turned - guessing from the chalked number on the wheel. In addition to being a good administrative practice, getting the wheelsets back to the original cars prevented asymmetries between truck wheelsets, which could lead to hotboxes.

'The CPR freight terminal opened at Montreal in July, 1950, provides facilities for better and quicker handling of freight. Approximately 3000 cars pass through the terminal every 24 hours.' 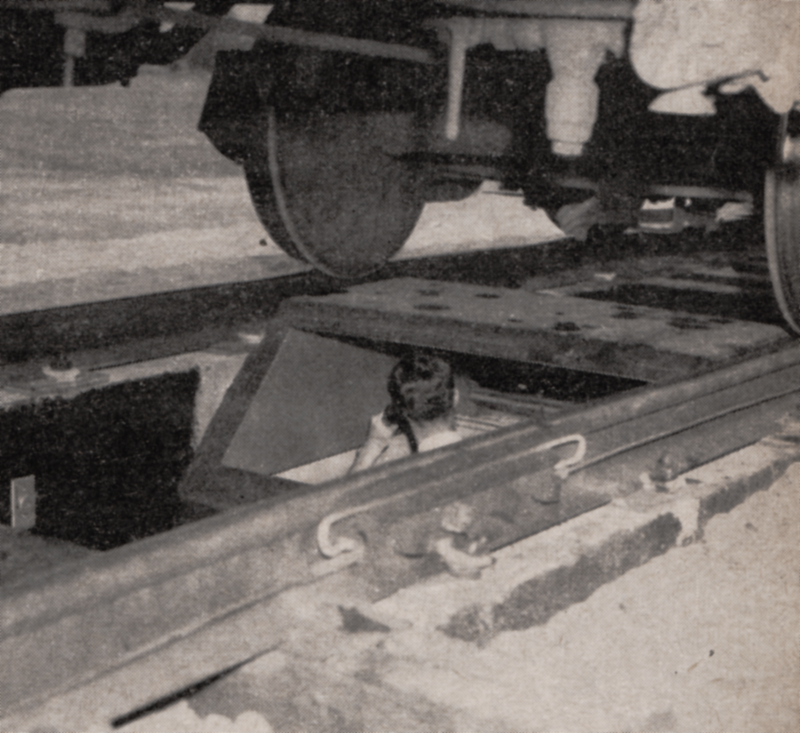 'Cars being pushed up the hump are inspected from an undertrack floodlit pit.' 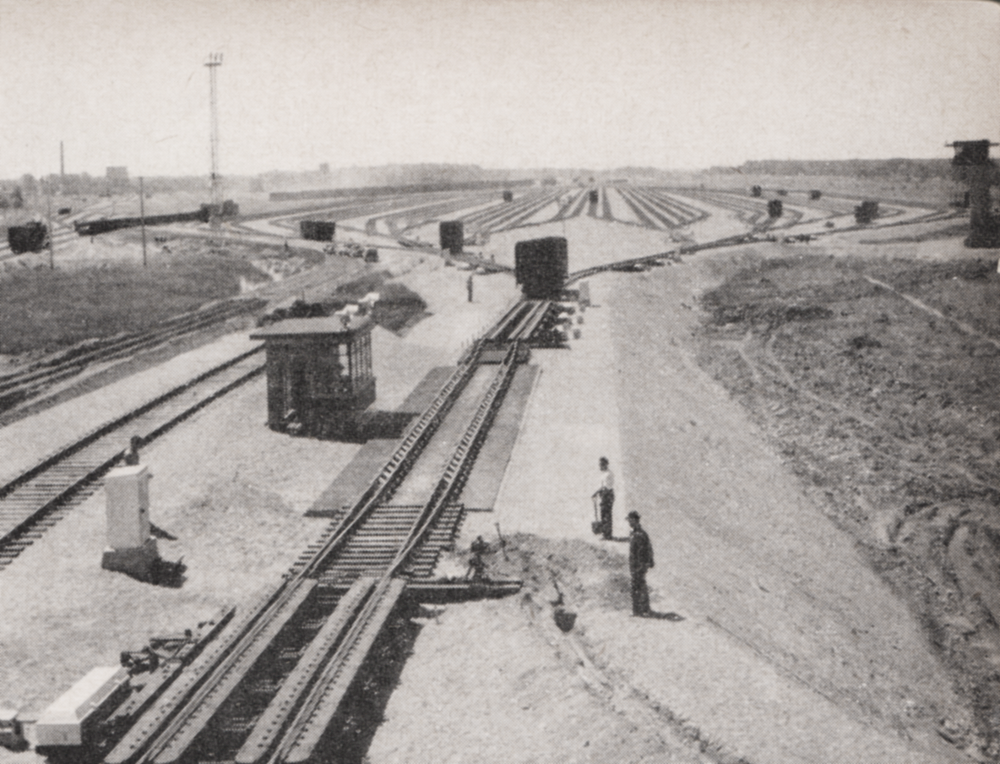 'Cars moving down the 'hump' into the classification yard are electrically braked and switched to their destined positions.'

... in fact this looks like the early testing and calibration of the yard equipment. Perhaps they are working with a combination of pneumatic and electric retarders. The freshly-dug trench suggests that the hump yard is not shown in its final form.

Hump yards - with human riders working as 'car retarders' - had been used for decades. Post-war technology brought about advances in power switching and power retarders - hard couplings were notoriously bad for fragile cargoes which had been factory-loaded in boxcars. Eventually modern sensing and computing power enabled the automation of most of the processes ... at least after the cut lever was actuated by a human at the top of the hump.

With many hump yards now taken out of service, one could argue that high-horsepower flat switching is the favoured way of sorting cars for their destinations. Beltpack remote control of switching locomotives still requires careful work planning ... and enough people to protect the ends of the movements. 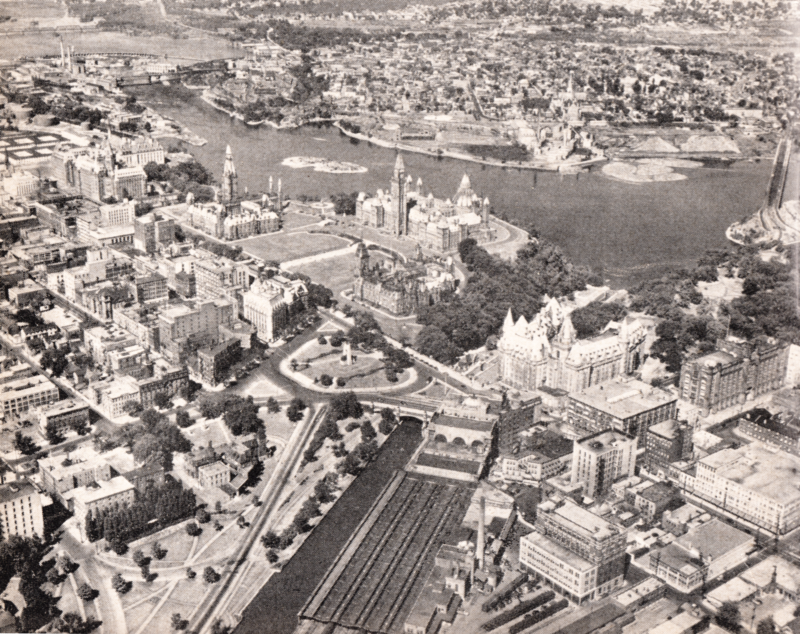 With the 'freedom' brought by post-war automobiles, Ottawa could get rid of its streetcar system and move its smoky and dirty downtown union railway station where it 'belonged' ... away into an industrial park somewhere. The future of transportation would be in autos and planes!

Below: Freedom!
This kind of freedom can be scaled up to fill as many traffic lanes as one might build. 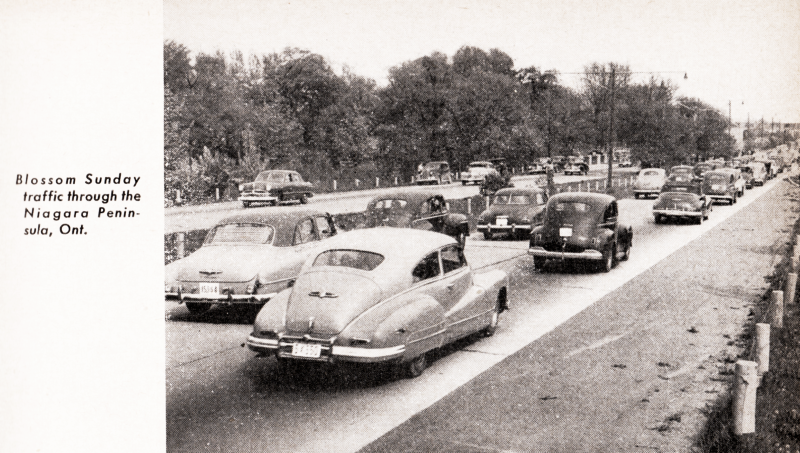 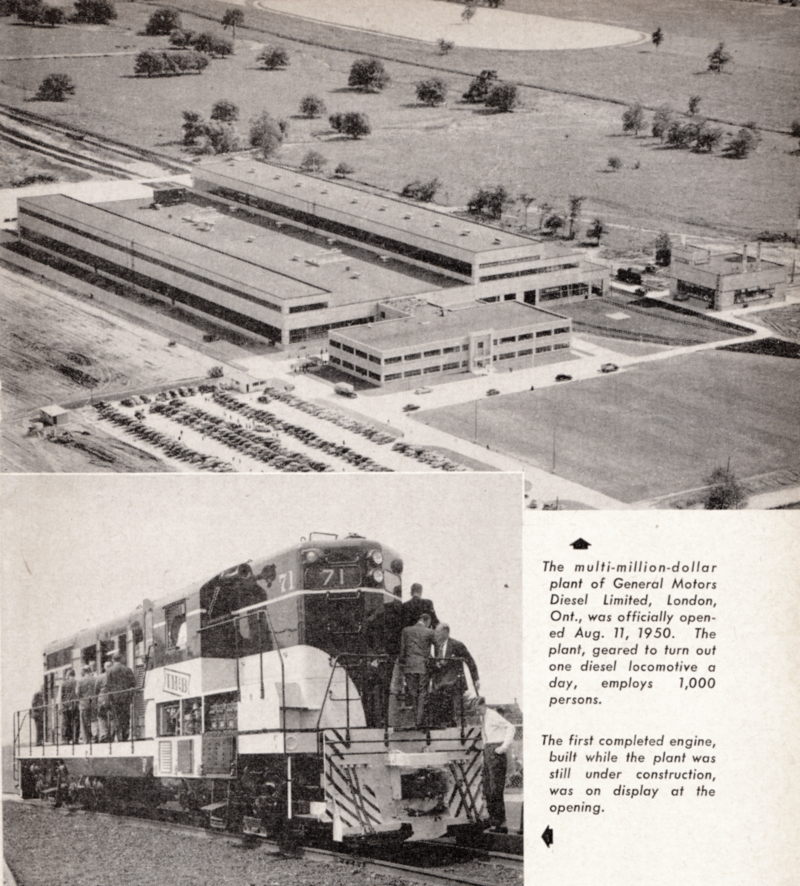 Notice the shine on this domestically-produced locomotive. 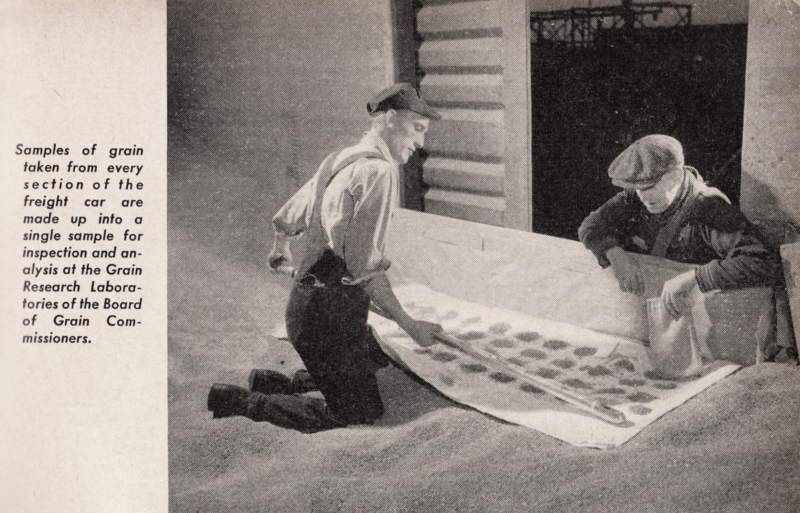 There was a Canadian elementary school reader story which described a thin and agile man who worked to get grain samples from each corner of the boxcars. Being thin was beneficial, as there was little clearance between the top of the grain load and the ceiling of the car for him to work in - an illustration was drawn to show the dark and claustrophobic working environment. This CD Howe Handbook photo doesn't quite match my childhood images of this type of work.

The worker at the door is leaning on a 'grain door' - assembled from boards at the country elevator and set inside the door frame to enable regular 40 foot boxcars to carry grain. Once the grain door was secure and made 'grain tight' with burlap, heavy paper, or other suitable material, the country elevator loading pipe was placed into the car, and the grain load would put back-pressure on the grain door. Levelling the load with shovels was part of the routine. The density of the type of grain loaded would determine the level to which the car was filled - and the filling levels for common grains (e.g. wheat) were often stencilled inside the car. The boxcar doors could then be latched and sealed in the normal manner after the car was loaded.

At its terminal elevator destination, the regular boxcar door would be opened, and the whole boxcar would generally be seized and tilted by mechanical jaws. The grain doors would often be broken before or during this process. Shovels could be used to finish the job.

Consider the ambient light outside. This is the best lit boxcar these two have ever worked in!

" ... remember that time the Grain Board photographer came with all his lights? ha ha ha " 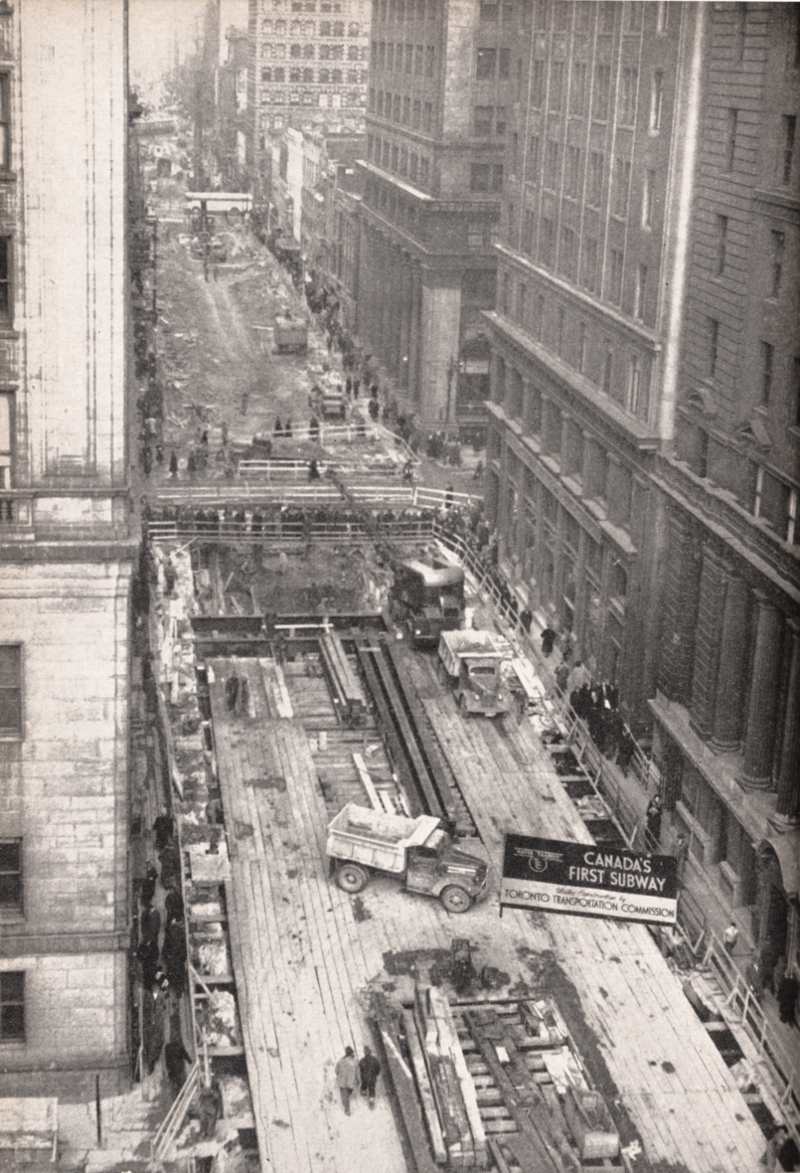 'Toronto's subway under construction. In the foreground the decking has been completed, while for the next two blocks top-lift excavation is under way. Beyond that traffic is proceeding normally.'