Some of the ICC stats from this book are quite interesting as they provide insights into American railroad history. On the non-profit book website archive.org there are a number of similar books available free. Here is a quick introduction to the ICC and an initial posting of stats from over a century ago. The Interstate Commerce Commission (1887-1995) was originally created to regulate US railroads.


By the late 1800s, the railroad network had grown to become essential to the US economy. There was increasing anger among some shippers, and also among members of the public, regarding the practices used by these corporations - see the cartoon above.

To be more specific: it was widely felt that the rates railroads charged in given circumstances ... and the political influence bought by these large corporations were both unfair. Eventually, this anger forced politicians in Washington to establish a unique regulatory agency - by its design, the ICC was separated from the regular direct interference of politicians.

Initially, as one might expect, its enforcement powers were too weak for the ICC to be effective as a regulator.


The following newspaper story segment came from the Boston Evening Transcript of September 15, 1899. The key idea suggested by this clipping is that 12 years after it was created, the ICC still wasn't able to do its job. 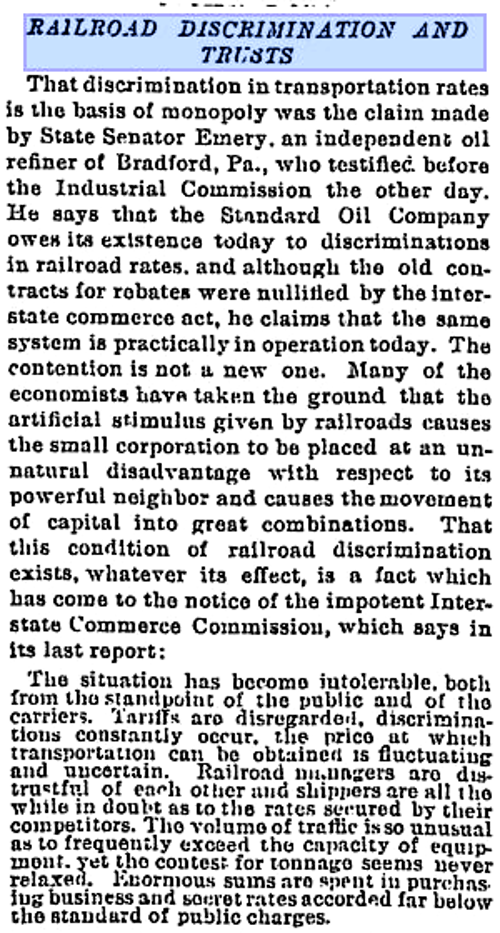 Later, some services such as telegraph, telephone and wireless also fell under its regulation (1910) as did other interstate 'common carriers' for goods and passengers by road (1935). Oil pipelines, express companies and sleeping cars, among others, were addressed in broad 1906 legislation which also gave the ICC the power to set maximum railroad rates.

Having given you this general context for the ICC's existence, this post will look at some interesting data which the ICC gathered about railroads over a century ago. But first, there was one particularly interesting action taken by the ICC in more recent US history ...


A Historic Unforeseen Use of the ICC's Powers to Ensure Fairness ...

In 1941, the US Supreme Court overturned an ICC ruling that it was unfair for a non-white railroad passenger holding a first-class ticket to be forced to ride in a second-class passenger car.

After this defeat, it seems the ICC regulators became a little too close to those they regulated, in allowing this type of racial segregation to persist. 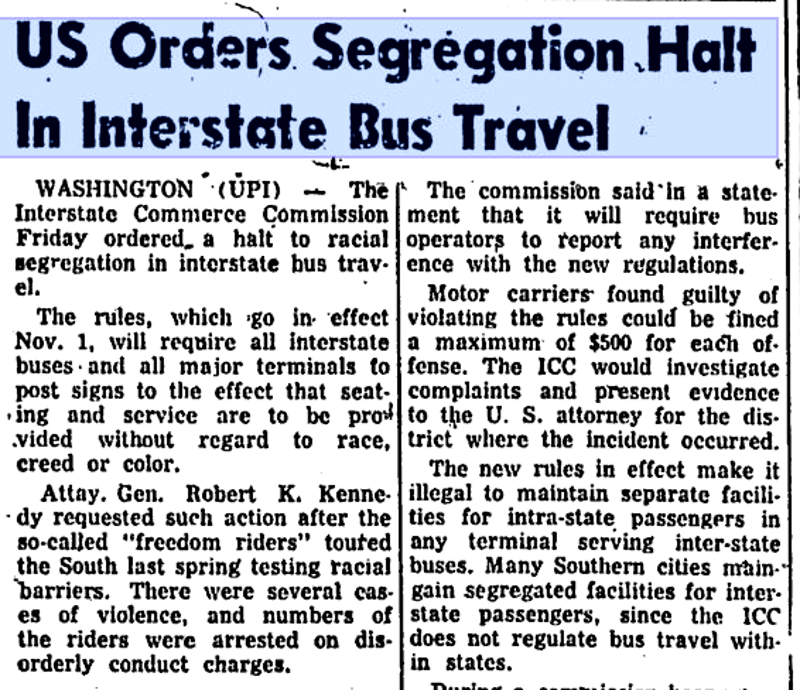 The ICC divided the US railroad system into Territories. The map below (from the same book) shows the boundaries of these areas. This division may have enabled the ICC to better tailor their rates and other regulation to regions where similar needs and economic circumstances were to be found.

We can imagine why population density (eg. the eastern seaboard), industrial demands (eg. the coal mining and steel industries) and Chicago's central role in the US rail network ... affected where motive power, passenger equipment and freight equipment were concentrated. 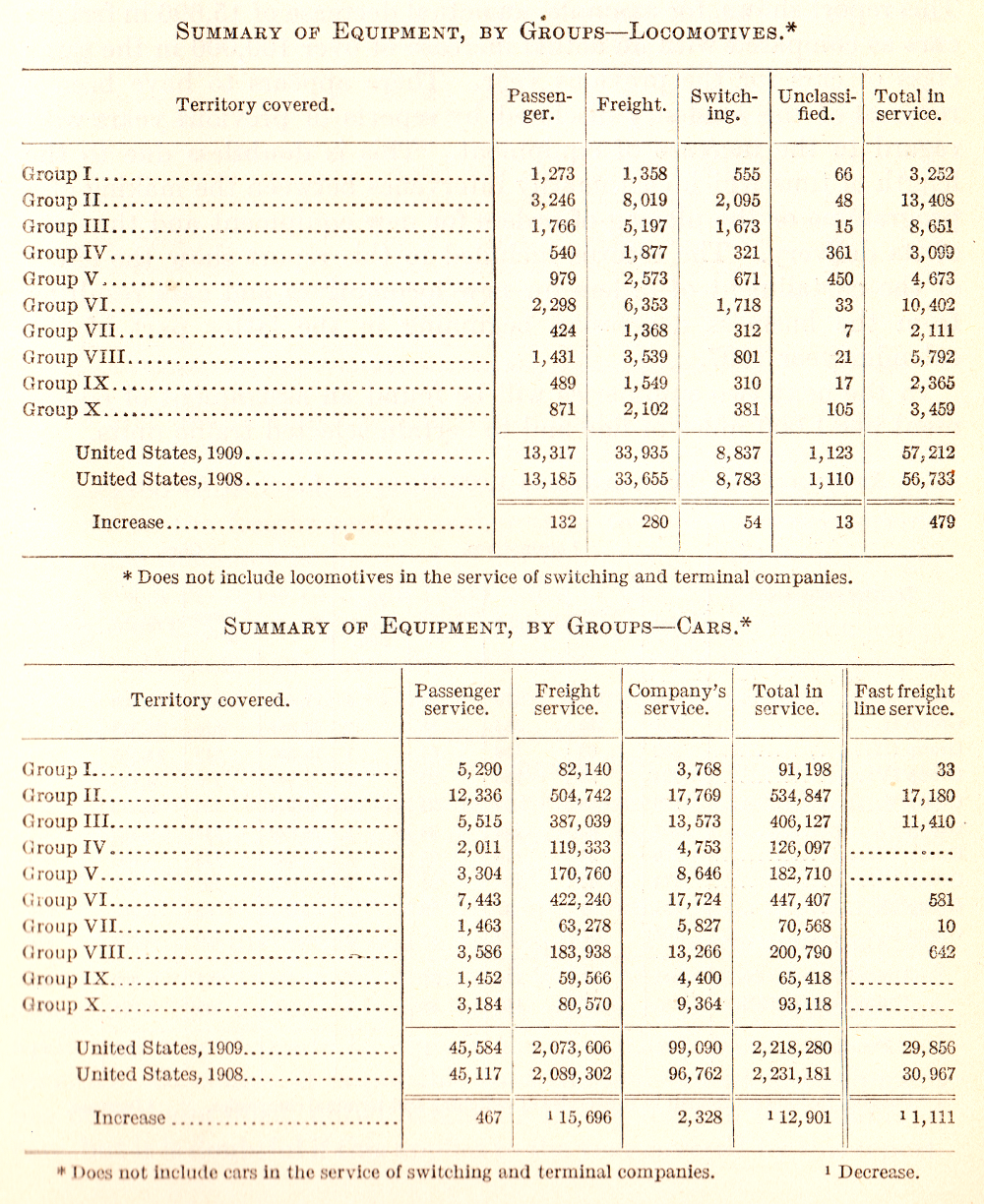 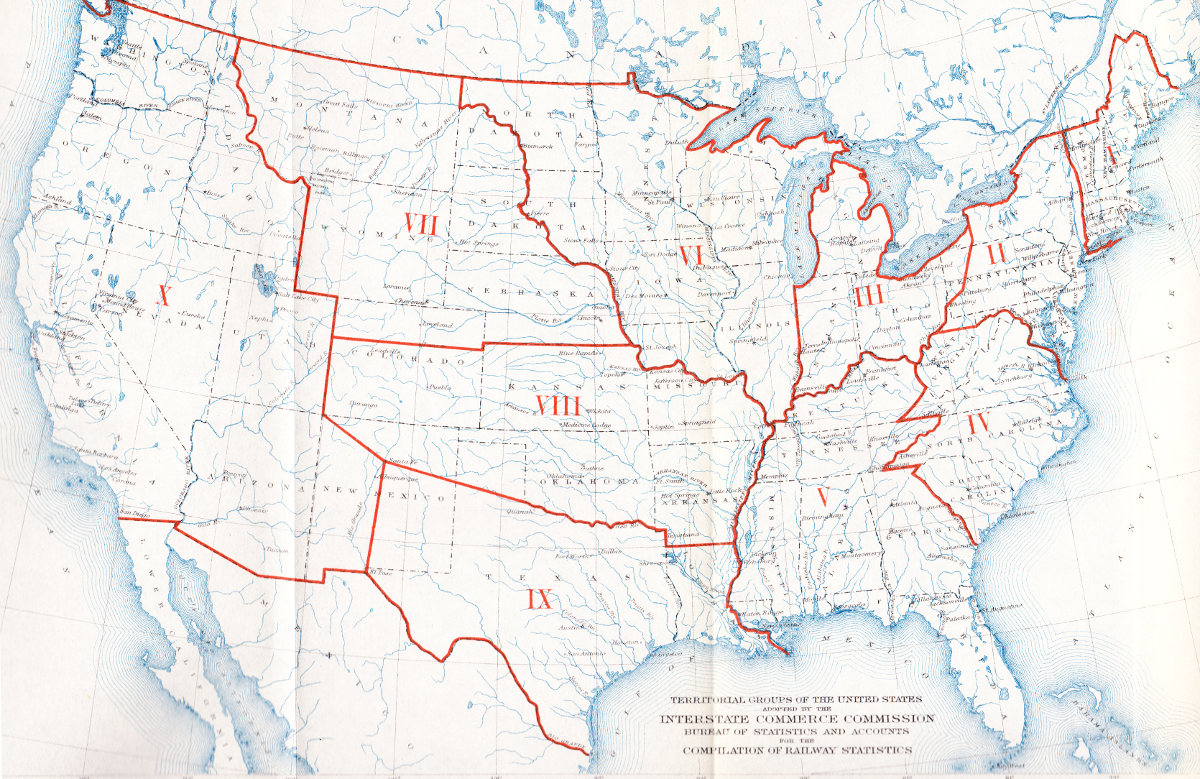 Below are some productivity statistics for equipment.

Equipment size and power, population density, length of a typical passenger journey, line grades and curvature, and train speeds (e.g. slower in dense urban areas ... versus high speed tangents in the sparsely-populated plains) ... may account for some of the variation between territories. 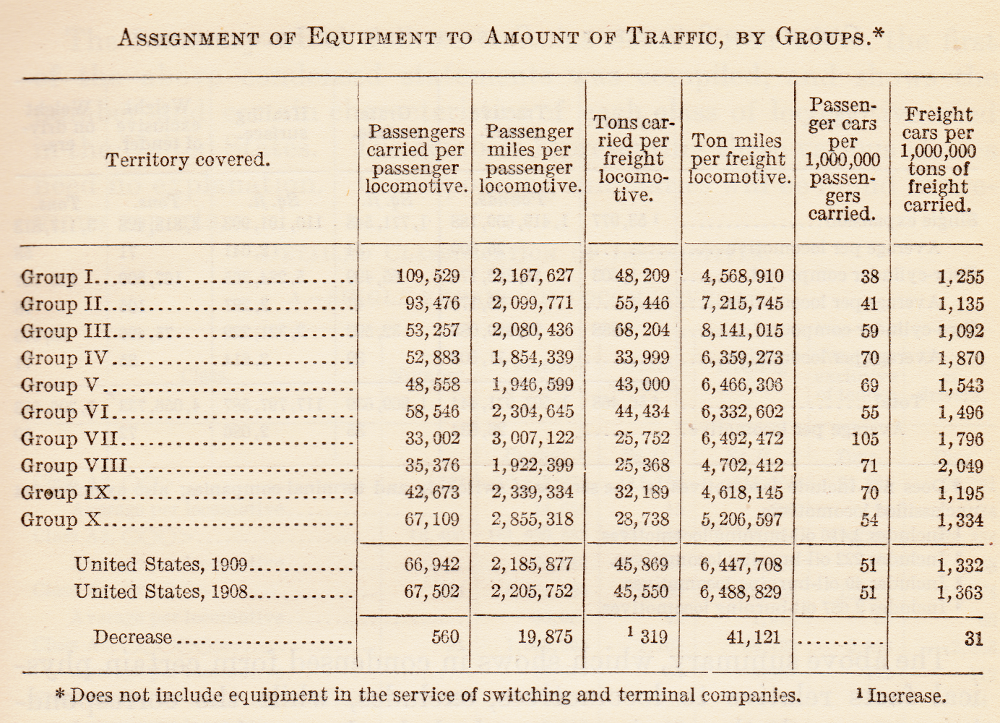 The ICC did more than count cars - as future posts will show.