For now, at least, this is the last of this telegraph series ... one could probably go on for ever ...

My effort has been to interpret the initial technological significance of the telegraph to the early expansion of Canadian commerce, and to explain the typical technology used at intermediate railway stations. The telephone would end much of the common Canadian use of the telegraph in the early 1900s. However, while a cadre of experienced railway operators still existed, so did the railway telegraph. Canadian railways have always loved simple reliable technology that works.

Note below, for example, that 'Y' 'Z' and the 'ampersand' use two 'measures of silence' between some sounds. The international "Continental" telegraph code is more familiar to most people than this ... 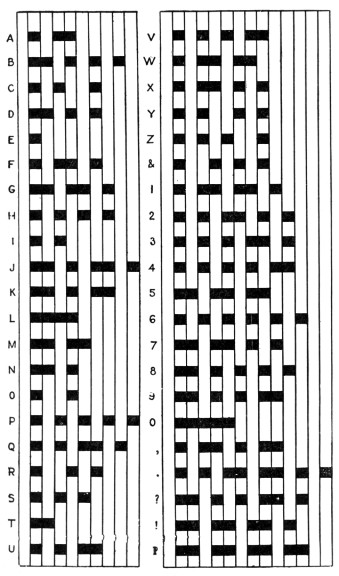 
Why wasn't the telegraph code used by the railways changed in the late 1800s -
to reflect some of the advantages of Continental Code?

Well, it seems that SO many railway telegraph 'operators' in the US and Canada were experts at the Vail code ...
that struggling to learn 'new tricks' would seriously impair productivity - and perhaps safety.

In the typical railway way ... the old technology was doing a good reliable job.


On previous pages, we explored the main line and local circuits.(diagram below)
Recall that these two circuits do not connect electrically and never swap electrons!

(Well, there is one exception:
When the station wires are struck by lightning and arcing occurs between the two circuits!)

But what happens if there are separate operators and telegraph instruments for the
'east end', 'west end', and/or branch lines in one office?

What if there are two or more main line wires running through the station?
(e.g. divided between railway traffic control use ... and commercial traffic)

What if the 'east line' is broken and the chief operator at division headquarters
designates another wire for temporary emergency use? 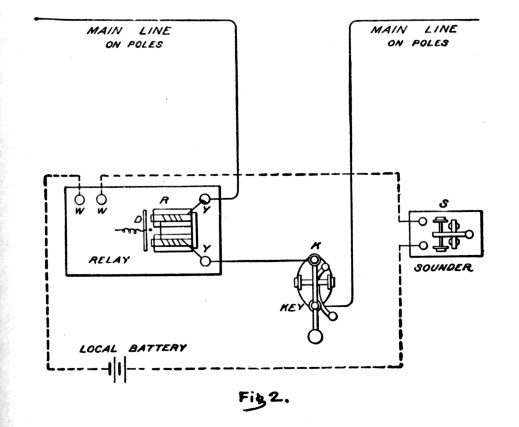 
Contrasting with the image of a busy army of telephone connection operators with headsets,
inserting plug cords into jacks,
and pulling the plugs when calls were complete ...

The intermediate railway station switchboard might have been changed only a few times per day.

There is an easy way and a hard way to understand this equipment.


Part A - The vertical switchboard components.


Coming into your intermediate station, you have main line wires : No 1 and No 2.
The railway and telegraph lines radiate north and south from your station.
That is, your trains are either 'northbound' or 'southbound'.

Q1. Where would you insert a metal plug ... so main line wire No 1 would be continuous through your station?

Q2. Where would you insert two metal plugs ... so main line wire No 2 would be continuous? 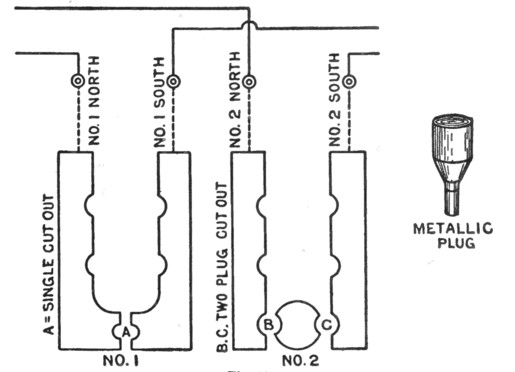 
Hypnotize yourself and believe : 'Vertical plates represent the wires.'

Part B - The horizontal switchboard components.

Forget that you've ever seen the 'metal disc with cutout holes' on the face of the switchboard part above ... don't look back !

At the left of the next diagram, you'll recognize the part of the mainline circuit
which is wired through the telegraph key (bottom) and the relay (left).

To make some kind of complete circuit out of this ...
you must do something around those metal discs which conveniently have cutout holes.

Connecting them horizontally will not complete the circuit ...

They must be connected vertically somehow.

Hypnotize yourself again ... and believe these things without reservation :

'Horizontal contact bars are at the REAR of the switchboard and can be reached by the metal plugs.'


In Part A, we learned how to connect two ends of the same main line wire through the switchboard ...
to make the main line wire continuous through our intermediate station.


In Part B, we learned that it was necessary to connect BOTH ENDS of a 'telegraph key & relay circuit' ...
by inserting 'a plug above and a plug below'.


Now it's time to put the ideas together.


(We can pretend the first key is for railway traffic control only,
the second key is commercial and personal telegrams.) 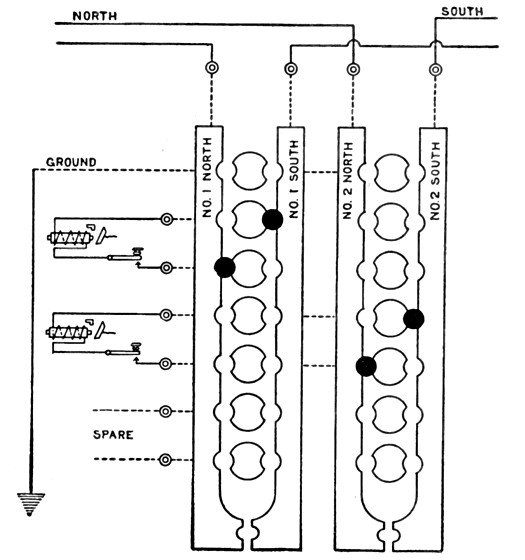 
Because the main line circuit always 'grounds' and ENDS at railway 'terminals'
- sort of 'by definition' (i.e. railway and telegraph 'network topology') -
we would 'cut' a main line wire if we inserted a plug or two at the local 'ground' on our switchboard because this diagram is for an intermediate station - not a 'terminal'.

Mainline circuit sketch from before.


In other words, by attaching the 'ground', we would make our intermediate station a 'terminal'
and block THROUGH signals from X to Y

The dispatchers and Superintendent would then get very angry at us until we disconnected the ground.
... because we would be cutting them off from the stations on the main telegraph line beyond our ground.


However ... if a lineman is working on wire problems ... we may be specifically asked to ground particular wires ... so sections of the main line circuits can be isolated and tested.

We would get this instruction to ground from the Chief Operator at a terminal ... after other main line wires were designated as replacements for message traffic.


The switchboard below represents a rather busy day for those associated with our particular railway's telegraph lines.
Evidently, there are all kinds of typical problems ... all happening at once.


If it all makes sense to you ... you have what it takes to make changes to the switchboard! 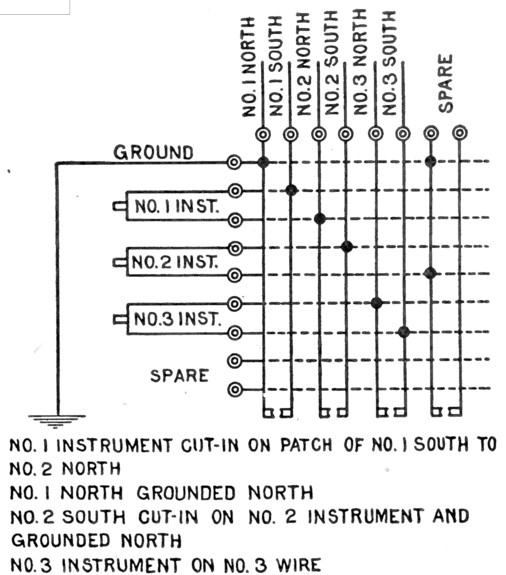 
Adding final touches of realistic detail ...
you can see how fuses and grounds were used to protect local instruments and circuits. 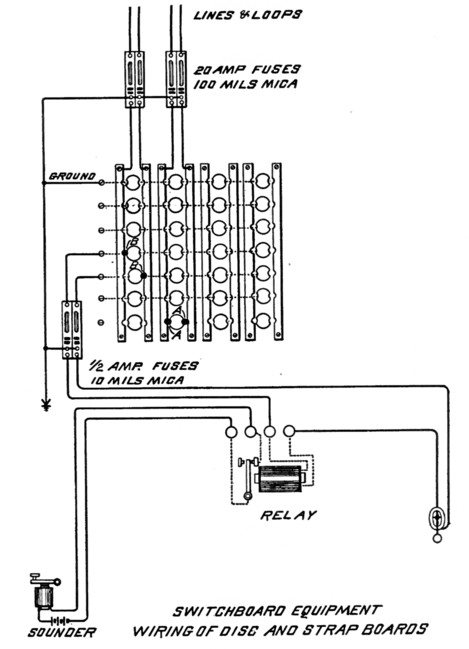 Intermediate station telegraph switchboard fuses and local instruments.
Notice the smaller fuses used to protect the delicate relay
... and the sounder on the local circuit (from arcing).


Circa 1900, the Telephone is becoming popular within urban areas ... 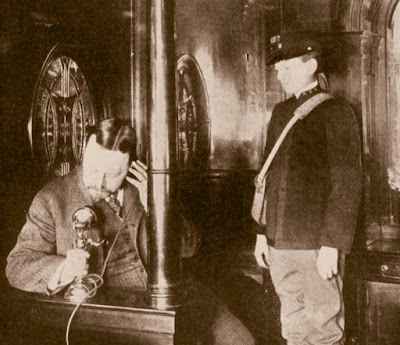 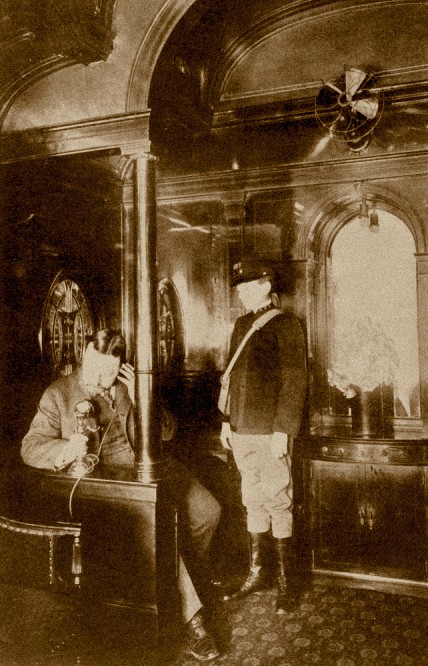 "Telephone service on 'The Overland Limited' in the terminal station, Chicago.
Passengers may converse with all city telephone stations up to the time of departure of the train."

(Please be sure to tip your telephone technologist!) 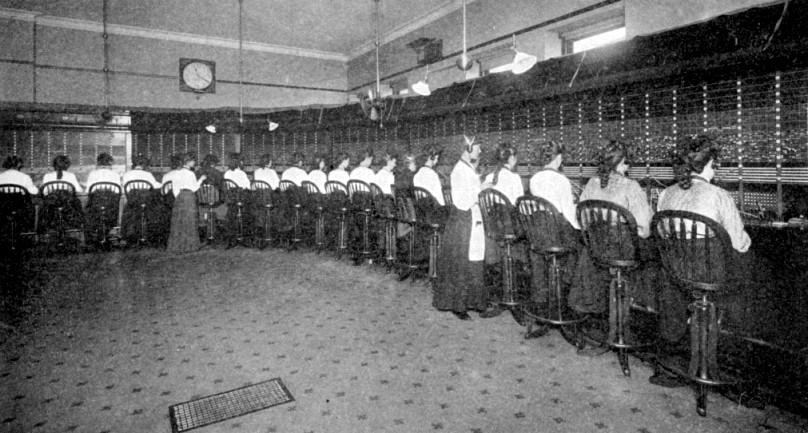 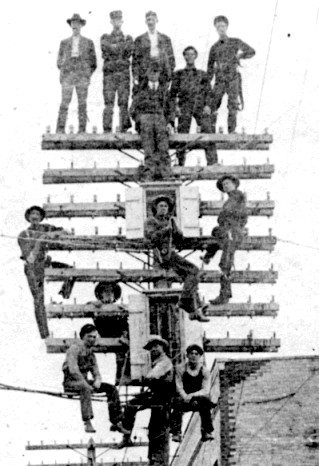