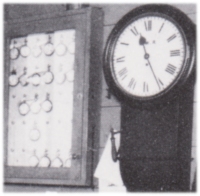 Traditionally, having the correct time out on the road meant that you would avoid a faceful of freight train.

Consider the march of technology. A local newspaper columnist once wrote about the traffic radar equipment being introduced in the City of Kingston. In the past, a speeder could reportedly beat a speeding ticket if it could be demonstrated in court that the police officer had not calibrated the radar set with the supplied tuning fork before beginning work that day.

'Forget it. They use this new radar to calibrate the tuning forks.'

It seems that the railway rule books are usually a couple of decades out of date with cutting-edge reality. Historically, railways were often profitable and safe because of their tendency to be conservative.

Every conductor, assistant conductor, locomotive engineer, pilot, foreman, snow plow foreman and such other employees as the company may direct, shall, when on duty, use a reliable watch that indicates hours, minutes and seconds and shall;

(i) be responsible to ensure that it is kept in proper working condition so that it does not reflect a variation of more than 30 seconds in a 24 hour period;

(ii) set it to reflect the correct time if it reflects a variation of more than 30 seconds;

(iii) before commencing work, compare the time on their watch with a railway approved time source. Where a railway approved time source is not accessible, obtain the correct time from the RTC or by comparing with another employee who has obtained the correct time. Every crew member assigned to train, transfer or yard service shall compare the time with one another as soon as possible after commencing work.

While every employee is held individually responsible for always having the correct time, one wonders if the prescribed personal timepiece is actually the least reliable source of railway time within a fusee's throw of the locomotive - given all the GPSed electronic telemetric gadgetry therein.

By the same token, employees flagging the headend of a steam-powered train (with the fire therein always threatening to melt the steel around it), ironically, were required to have matches.

Obviously, when one is 'all alone' out in a snowstorm, one must know the correct time, or be able to light a kerosene flagging lantern without using the locomotive's resources. You are individually responsible. You and your crew will also be held collectively responsible.

I am interested in the concept of time(s). Like many of you, I also enjoy reading old rulebooks and timetables as they allow me to imagine other (probably idealized) periods in railway history. Very small settlements like Schreiber, Ontario once had prosperous watchmaker shops to supply, and to regularly inspect and regulate, the timepieces of all the local running trades personnel and other employees affected by the rules.

... So what could be better than a 'history book' of the time rules which was designed to provide the 'bureaucratic memory' to the AAR and its members? 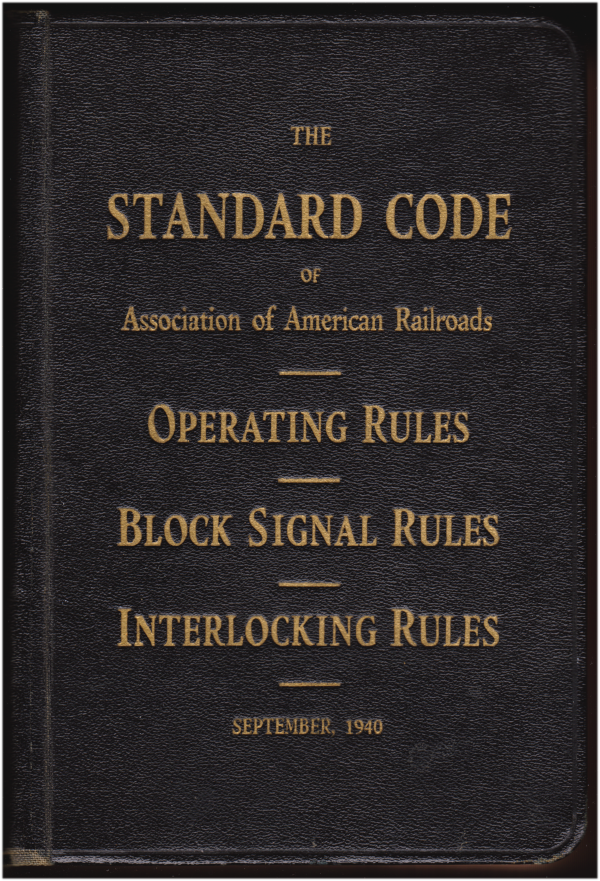 This little old book is about 4 inches x 6 inches x 1.6 inches thick and does not like to be scanned.
... pardon my gutters. 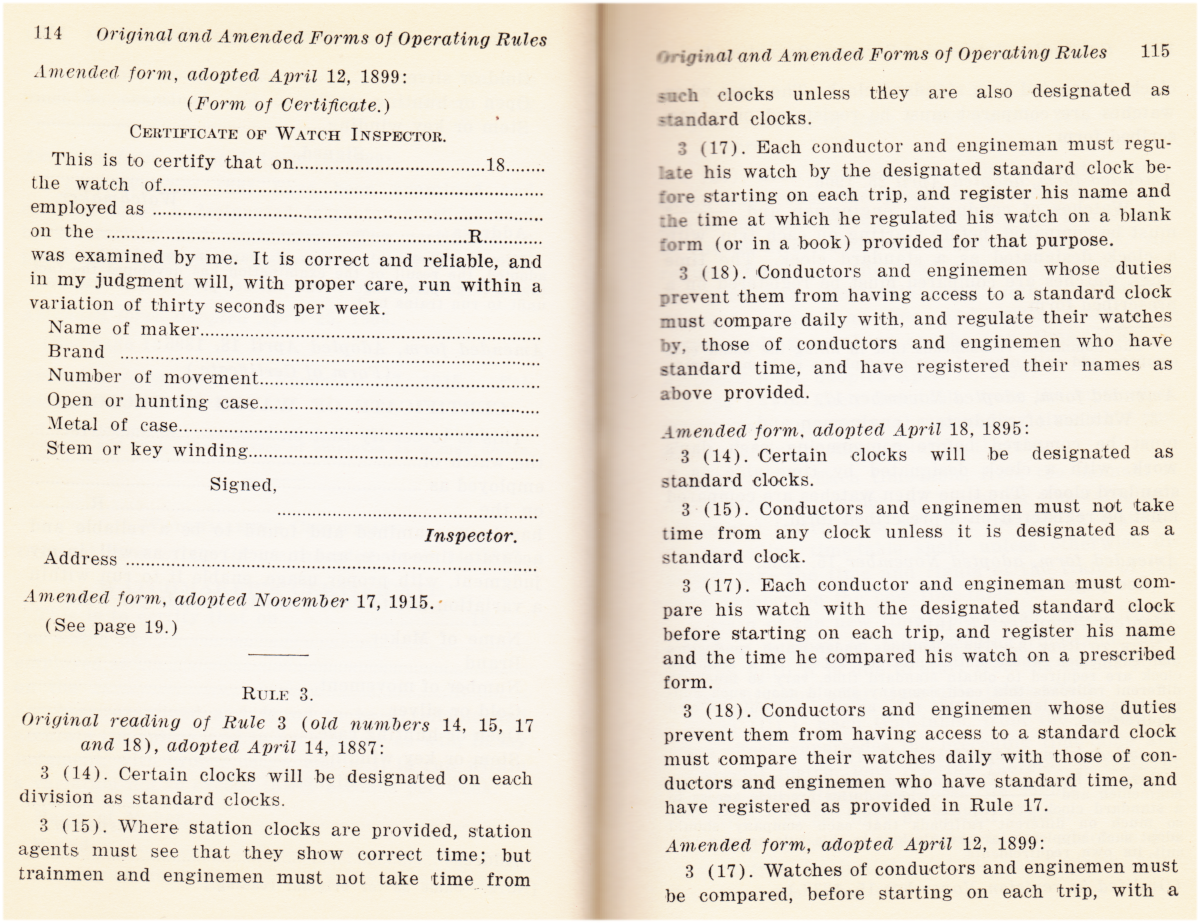 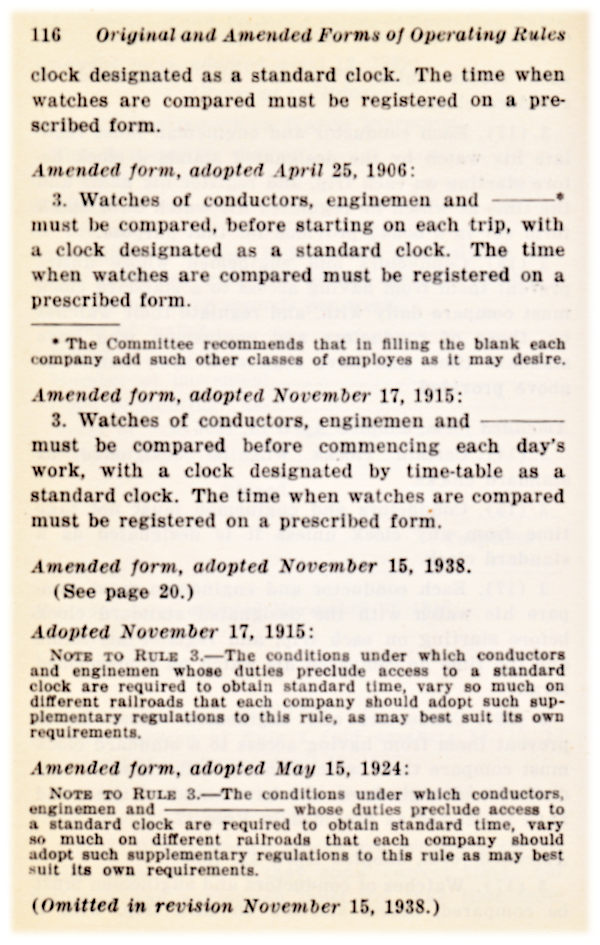 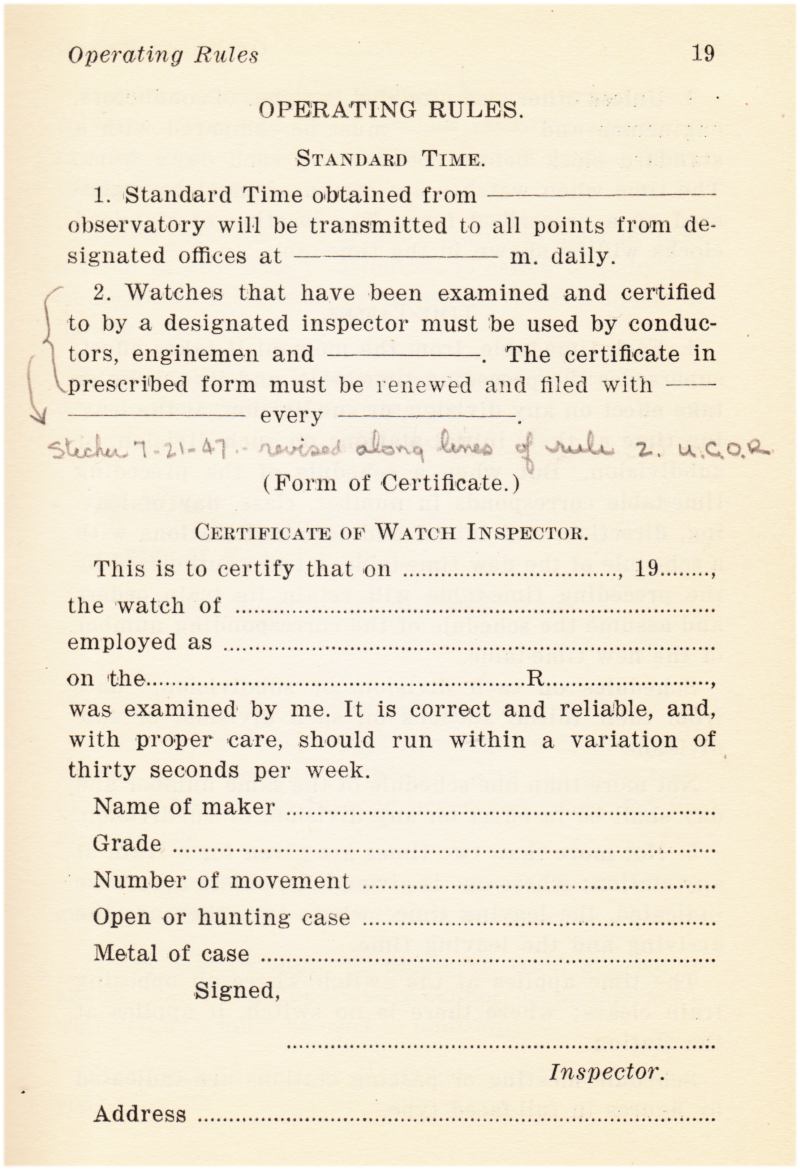 *  *  *
Moving on from rule book time, to time(s) ...
One period of railway history which I find particularly interesting is the nightmare period before railways and railroads began to standardize their individual or collective times ... and before national time zones were established across continents.
... Solar time was 'our city's time' or 'God's time' ... and it stood preeminent. If you had an actual appointment (rather than a simple 'walk-in and wait'), the city's chiming clock towers could guide your temporal journey to the public building or private office ... where you'd find the affluent professionals, their fancy clocks and watches, and their 'time is money' ethic.
... Church bells and other calls to worship were also intended to regulate people's temporal journeys back then ... but I digress.
Consider the march of technology. Society required more and more people to be able to tell time from a 12-hour clock face. People became more educated and affluent. People travelled longer distances away from their homes via faster and faster railway networks.
... People began to notice that their personal timepieces were matching neither the position of the sun, nor the carefully-kept local solar time at the settlements where they detrained ... 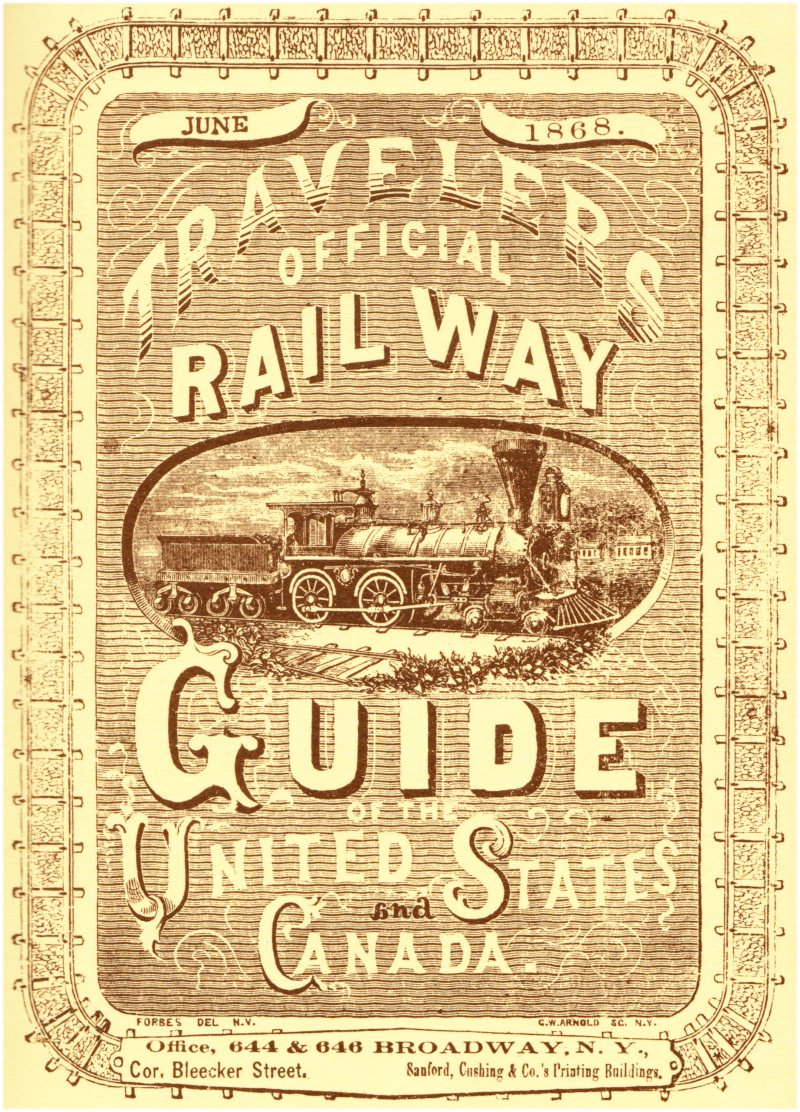 And don't even get Sandford Fleming started on railways using only a 12 hour clock!
Did you spot the 5 Canadian cities?
*  *  *
To travel farther through the looking glass of North American railways during the era of local solar time, up trains, down trains, noon guns, and time balls ... perhaps try this earlier post ...
Canadian Railways - Public Timetables from 1874
*  *  *
Finally, on the Great Western Railway (UK), here is an undated view of a watchmaker within its little shop of horologists. With all the mechanical time-keeping machines located throughout the GWR's dense little railway system, it made sense to have a centralized staff of experts to repair and oversee their use.