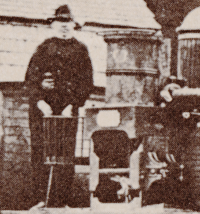 You know, it is simply refreshing when one hears of a product that is so well designed and so well built (and cared for) that it just keeps working and working. When something wears like iron.


In the early 1980s, near the end of a dark and rainy vacation afternoon and with miles yet to travel, we were trying to find the pioneer Nova Scotia steam locomotive Samson. This spontaneous objective was based on the description suddenly noticed in a tour booklet. We may or may not have found the Centennial Project building which had housed it, but we were either late in the day or late in the season and missed it.

... I was too narrow and unevolved in my interests back then to really appreciate what we had missed. As I have acquired more general knowledge about history, technology, 'the human experience' and other fields ... I have found that the breadth and depth of interesting railway subjects has expanded far beyond that which I will ever have the time to enjoy. One can get beyond chasing one's personal nostalgic memories ... but perhaps at the risk of losing the interest of readers. Anyway ...

Since 1990, the engine has been preserved and interpreted to the public as a valuable artifact of the Nova Scotia Museum of Industry in Stellarton.

As a city or town near you has demonstrated, Canadian steam locomotives retired circa 1960 were often acquired by civic groups and displayed outdoors without much understanding of why that was very a bad idea. Once the acquiring generation left the scene, subsequent generations began to wonder why a thoroughly vandalized, rusting, asbestos-dispensing hulk was an attractive feature for a public park.

The Samson may have had some close calls in the decades after its retirement.

As an insight into how artifact conservation has changed over the years, a fascinating image at the Museum's website shows that the Samson was fitted with Baltimore & Ohio tires during the time it spent away from Nova Scotia.

To provide a proper background for this engine, here is the Samson story from the reliable Railways of Canada (1972) by the Mikas. 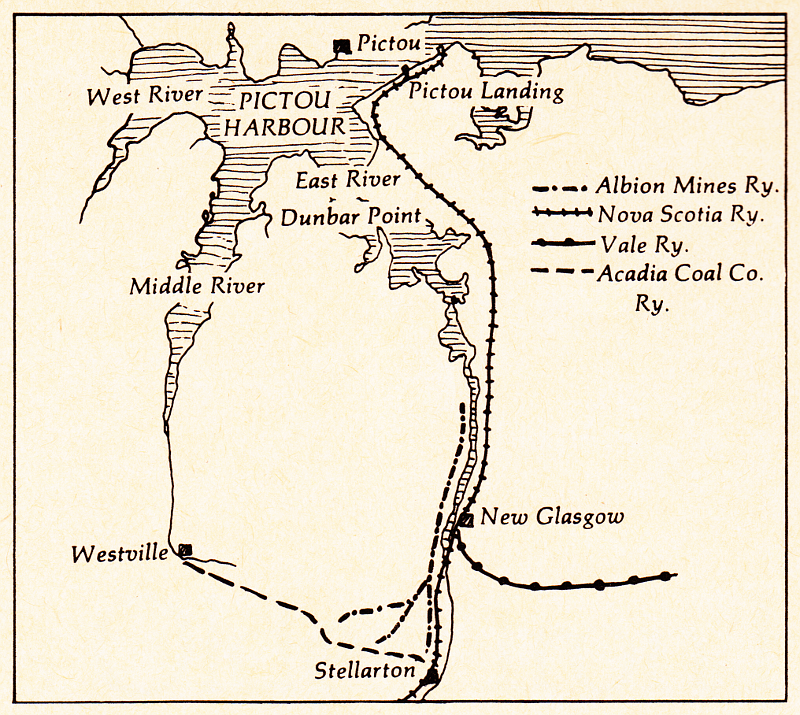 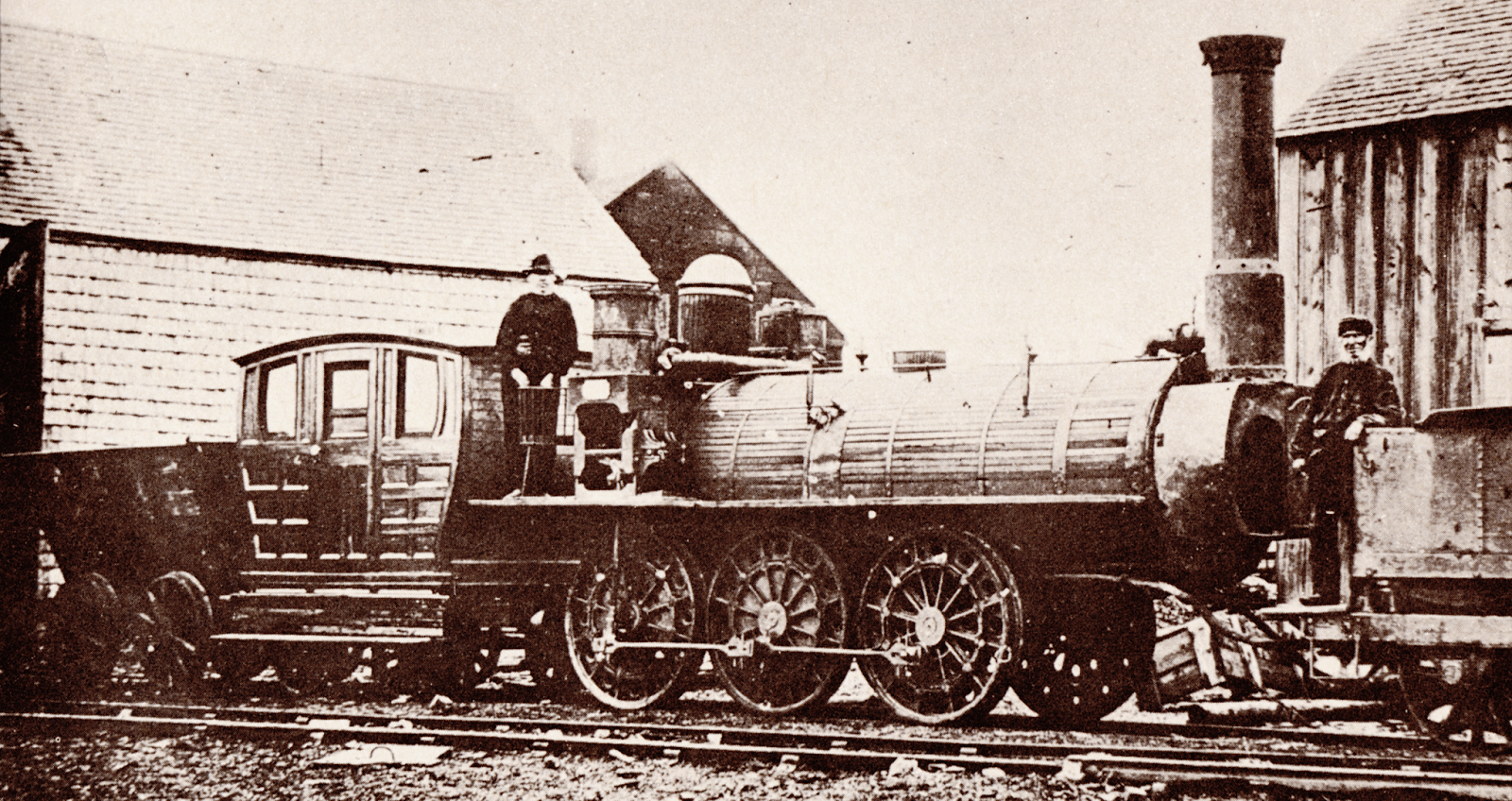 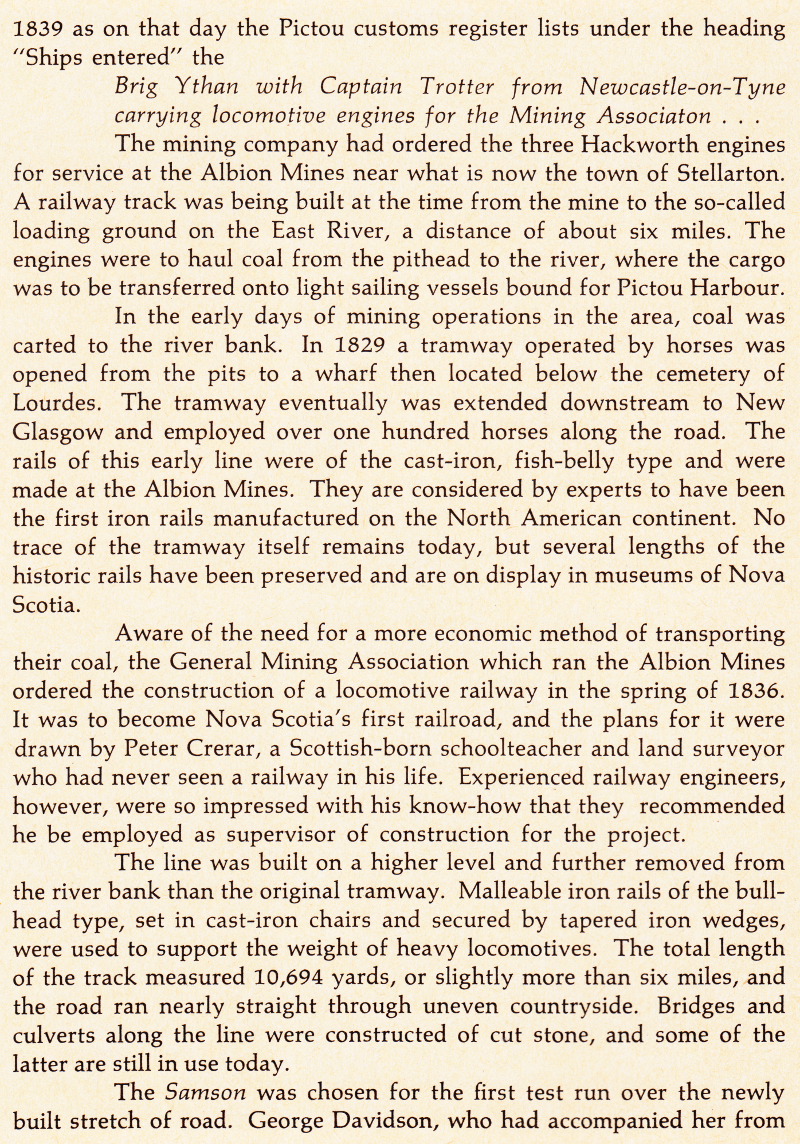 
This booklet piqued my interest in the Samson history. Among the locomotives referred to are a number of 'so-called' locomotives. While these may have been presented to the public as if they were museum pieces, many are inaccurate reproductions which do not contain any parts dating to the time of their namesake. In some cases, for the ease of construction and operation, the method of transmitting energy to the wheels is entirely inaccurate.

Just as good preservation practices no longer involve placing a vehicle outside, good 1950s-era museology was careful in properly identifying an artifact. A railroad or an exhibition might want to present a grand pageant of the evolution of railroading by designing and building various things in their shops ... but no one should later be led to believe that the actor-locomotives of the pageant were accurate representations of what once was. 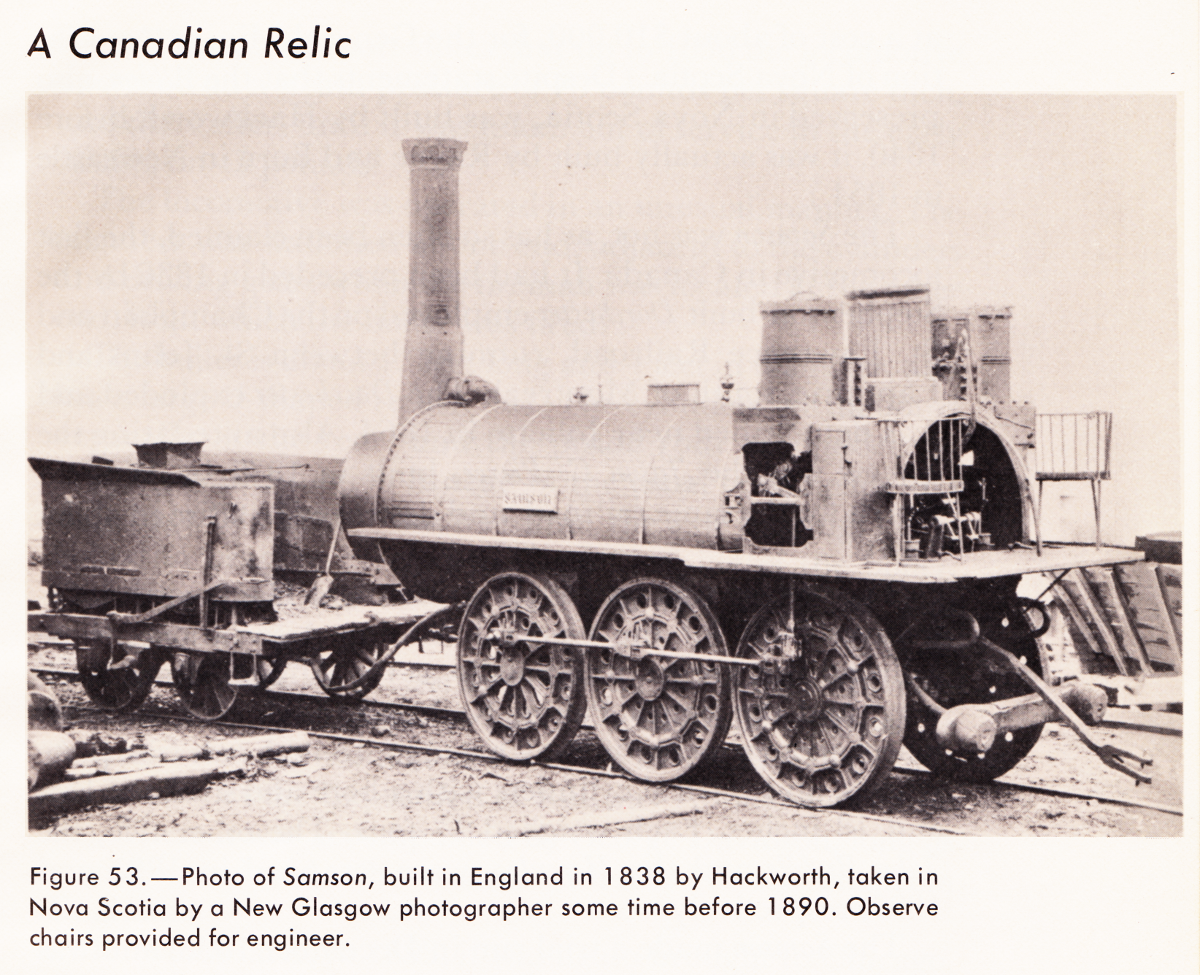 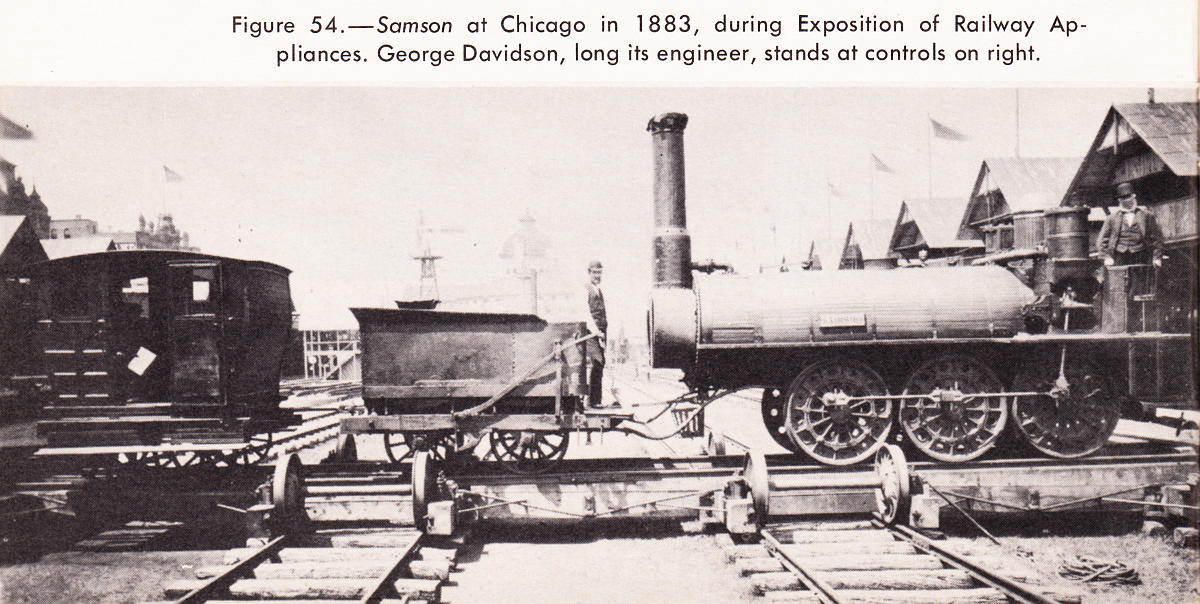 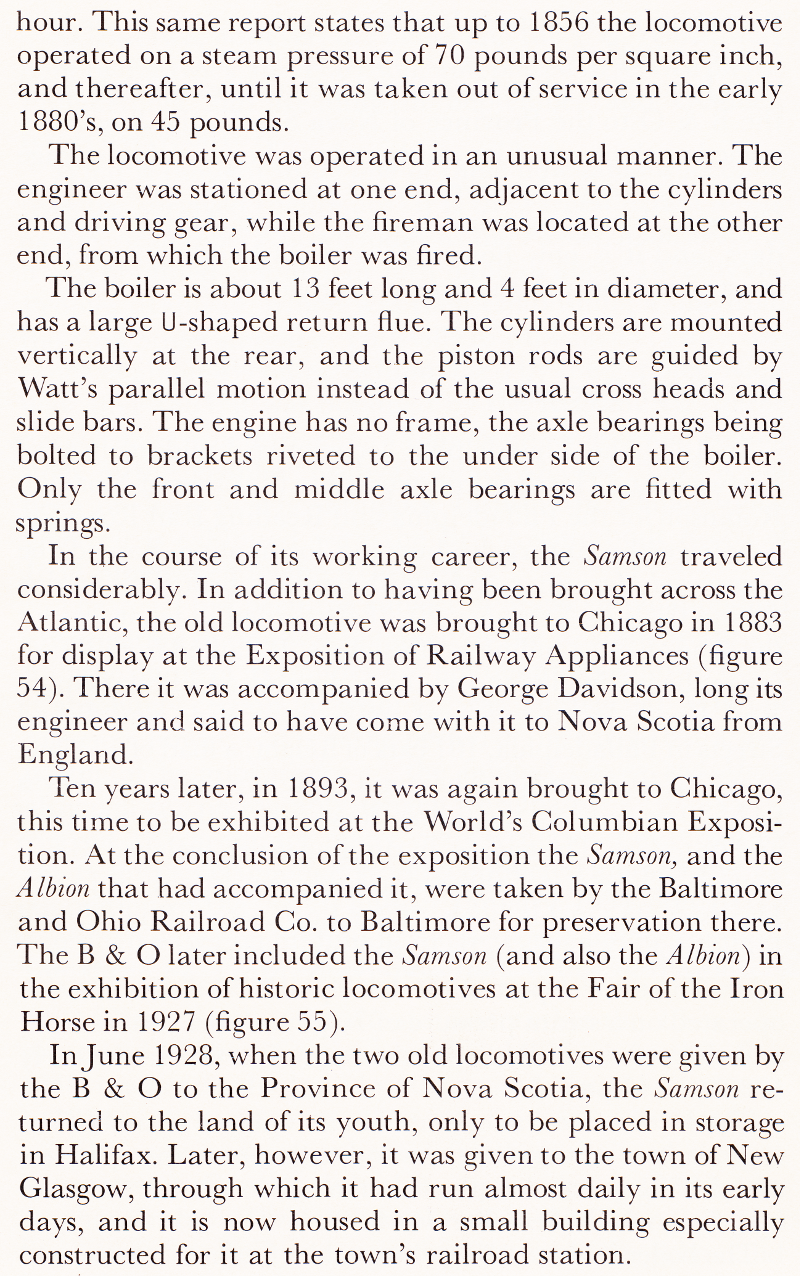 From a favourite reference, here is a little more data
on the corporate history of the railways in the area.

Below are key points on the railway lines in the area as they existed in 1915.
This data is not necessarily along the roadbed of the original line used by the Samson.


The map below shows the local lines within the railway ecosystem of the 1940s.
A circular inset gives more detail of the specific area.


There are some excellent websites giving much more precise detail on the development of the series of locomotives designed and/or built by Timothy Hackworth (1786-1850). A good start is his Wikipedia page.

Hackworth's father had already worked at the colliery at Wylam - just 10 or so miles up the river from Newcastle upon Tyne in a region since known for its collieries and railway pioneering. This is in north-eastern England near the Scottish border.

Timothy Hackworth followed in his father's footsteps in the cutting edge technology of boilers and railway mechanical engineering. William Hedley (1779-1843), the colliery's managing engineer was credited with the first engine pictured below. However, young Hackworth may have been more instrumental in developing and executing the ideas which made this successful engine possible.

For my convenience 'by Hackworth' below indicates that he at least designed the engine or that the engine is patterned on his designs.

Although its design seems odd when compared to a mid-century 4-4-0, the Samson wasn't the only engine stoked from the front and that is what I am attempting to illustrate with my motley collection of images below. I have used the data supplied in the books from which the images came. Not all photos represent the locomotives in revenue service shortly after their creation - some are preserved and/or altered.

A final key point is that the Samson was ideal in its designed role ... in coal drag service operating at human jogging speed. When this design was operated at higher speeds, the thrust of the vertical rods produced excessive vibration and caused track damage.


This is the Puffing Billy, produced by William Hedley in 1813 at the Wylam Colliery.
Here, in 1862, it is still in service with repairs and modifications made over the years.
It is preserved at the Science Museum in London.

The Royal George, by Timothy Hackworth in 1827 for the Stockton and Darlington.

The Wilberforce by Timothy Hackworth in 1838 for the Stockton and Darlington Railway.
This is the same vintage as the Samson.
That may be a 'coal-powered headlight' hanging on the tailend of the engine.

The Derwent by Hackworth in 1845.
Today it is preserved at Darlington.
Notice (among many other improvements) that the piston rods are no longer vertical.